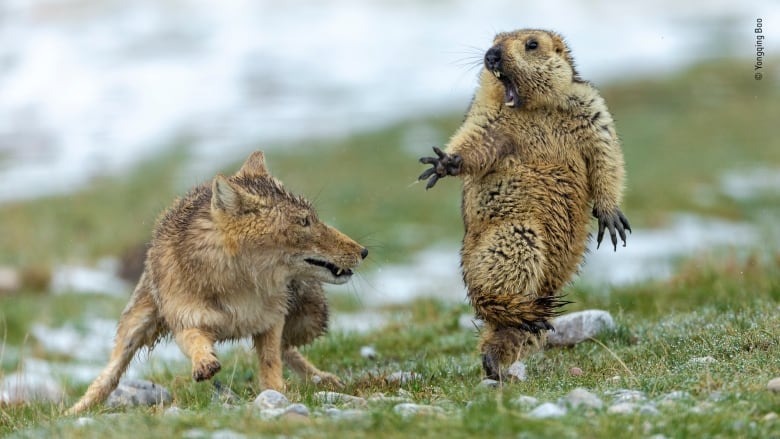 A marmot leaping into the air, paws flailing, with a look of terror on its face, as a fox hunches beside it, readying to pounce, has won Chinese photographer Yongqing Bao the title of Wildlife Photographer of the Year for 2019.

Bao, director and chief ecological photographer of Qilian Mountain Nature Conservation Association of China, captured the young Tibetan marmot as it grazed in the alpine meadow of the Qinghai-Tibet Plateau after emerging in the spring from its six-month hibernation.

An hour before the photo was taken, the marmot had spotted the Tibetan fox and whistled an alarm to warn the other 30 marmots in its colony to take cover. But seeing as the fox, a mother with three kits, had not moved in a long time, the marmot left its burrow again, explains the caption for the photo.

The fox killed the marmot shortly after the photo, titled The Moment, was taken.

Roz Kidman Cox, chair of the judging panel for the international Wildlife Photographer of the Year competition, called the image "quite simply the perfect moment."

"This compelling picture captures nature's ultimate challenge — its battle for survival," said Sir Michael Dixon, the director of the Natural History Museum, London, in a statement as the winners were announced Tuesday evening. The museum produces the annual contest, now in its 55th year.

The top image was the winner in the Behaviour: Mammals category. 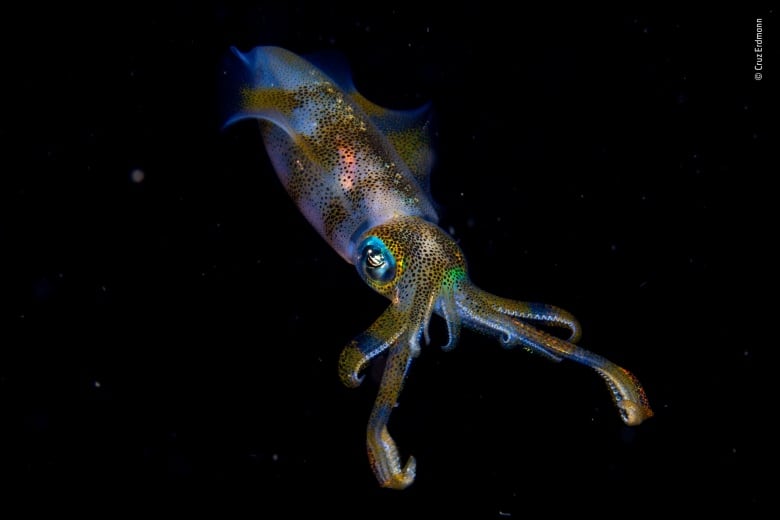 The winner of the Young Wildlife Photographer of the Year award was Night Glow, a nighttime, underwater image of an iridescent big fin reef squid captured off North Sulawesi, Indonesia by 14-year-old Cruz Edrmanntook of New Zealand.

The contest also recognized the top photo in 17 other categories. The Top 100 photos of 48,000 entries, including three taken by Canadian photographers, will be part of an exhibition that opens Friday in London, and heads to Canada later this fall. It will be at: 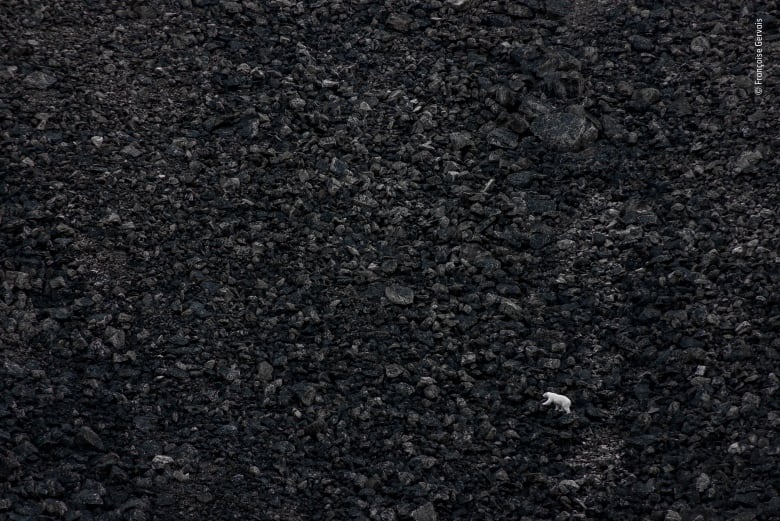 The Challenge by Françoise Gervais will be featured in the exhibition. It's a photo of a white polar bear scaling a huge, black scree slope on Baffin Island. (Françoise Gervais/Wildlife Photographer of the Year)

The Challenge, a photo of a polar bear scaling a black scree slope on Baffin Island, captured by B.C. photographer Françoise Gervais and entered in the Animals In Their Environment category.

The Wall of Shame, by Jo-Anne McArthur of Toronto. It features the snake skins and signed, bloody handprints of participants who have skinned snakes at the annual rattlesnake roundup in Sweetwater Texas. It was entered in the Wildlife Photojournalism category.

Lucky Break, by Saskatchewan photographer Jason Bantle in the Urban Wildlife category. It's the photo of a raccoon poking her head out of an abandoned 1970s Ford Pinto where she is raising her five kits.

Gervais captured her polar bear from a small aluminum boat during an expedition to Baffin Island a few years ago in August, when the sea ice has melted and polar bears take to the land. She noted that many polar bear photos are closeups on the sea ice, and wanted to provide a different perspective at a time when climate change is pushing the animals to spend more time on the land.

"It's kind of alone and really in a vast landscape — even the strongest predator, you can see they can be vulnerable and fragile." 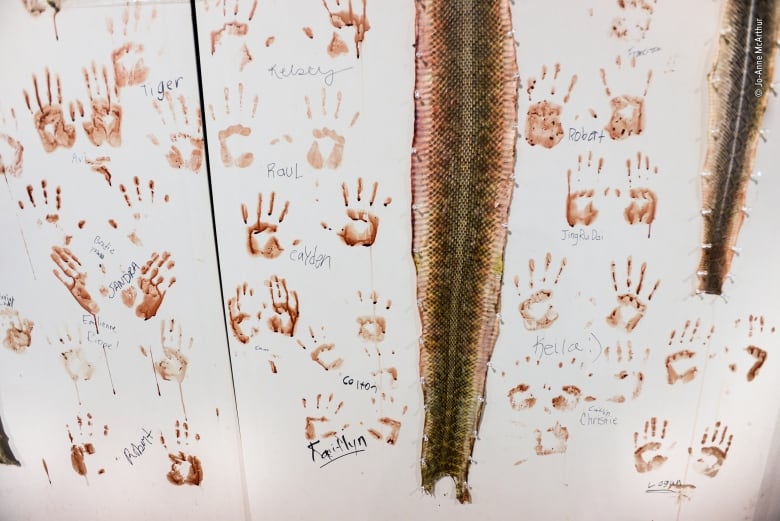 The Wall of Shame by Jo-Anne McArthur of Toronto features the bloody handprints of people who have skinned snakes during the annual rattlesnake roundup in Sweetwater, Texas. (Jo-Anne McArthur/Wildlife Photographer of the Year)

McArthur went to Texas when she heard about the rattlesnake roundup there, a four-day event that begins with using gasoline to flush snakes from their winter dens. The snakes are tossed into pits, their heads are cut off, and then festival-goers pay to skin them.

In a caption for the photo, McArthur says what she found most unsettling was that so many of the bloody handprints of rattlesnake skinners belonged to children.

In an interview with CBC News, she said there are similar festivals all over the U.S., which organizers say are needed to control populations of venomous snakes.

"This is the biggest one, and it's also the most gruesome," she said.

McArthur said the Wildlife Photographer of the Year competition was originally about "beautiful" images.

"That doesn't really represent our relationship with the natural world these days," she added.

She's pleased the photojournalism category was added a few years ago to show images like hers. 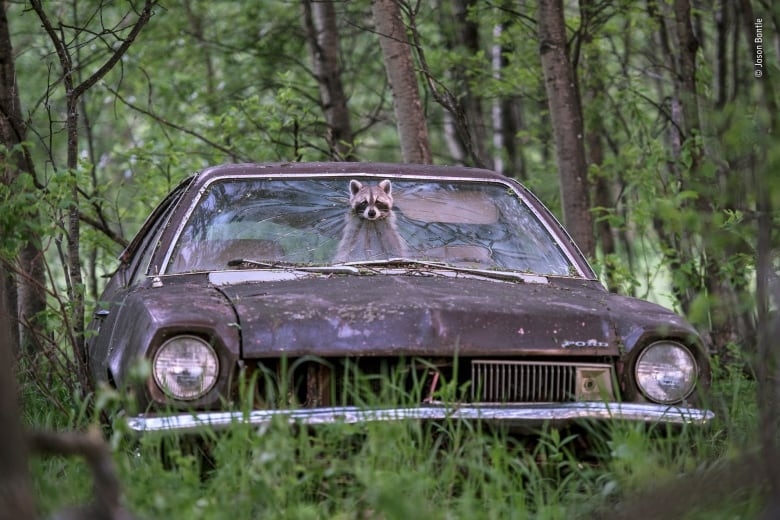 Lucky Break by Jason Bantle features a raccoon poking her head out of an abandoned 1970s Ford Pinto on a deserted farm in Saskatchewan. (Jason Bantle/Wildlife Photographer of the Year)