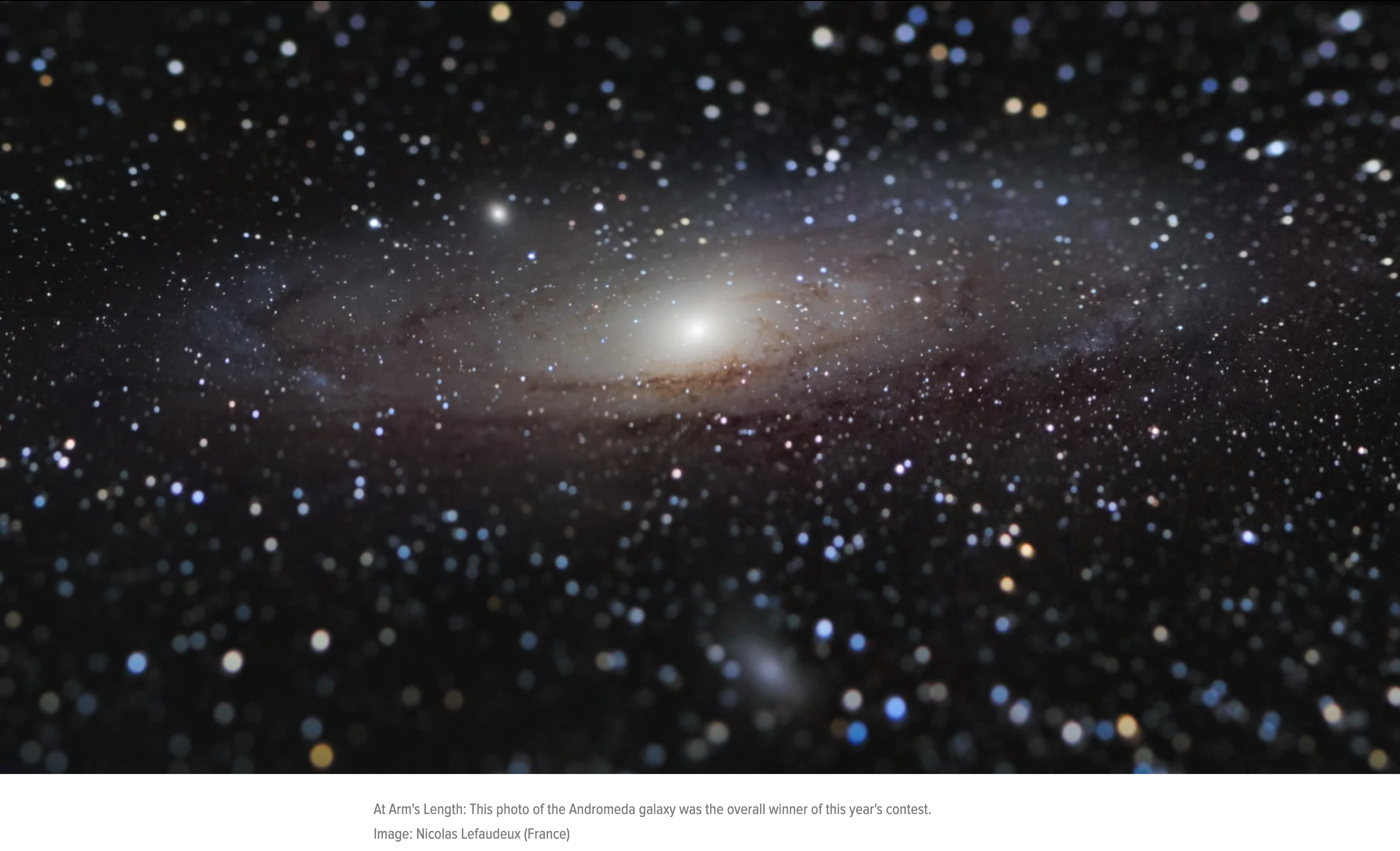 The prestigious Insight Investment Astronomy Photographer of the Year competition has announced the winning photos of its 2020 contest. From galaxies and star-forming nebulae through to planets, aurorae, and annoying satellite trails, these photos remind us that Earth is but a peculiar speck in the vastness of space.

This is the 12th running of the photo contest, which is managed by Royal Observatory Greenwich in association with BBC Sky at Night Magazine and Insight Investment. For this year’s contest, judges had to pore over and shortlist 5,000 entries gathered from six continents.

French photographer Nicolas Lefaudeux’s stunning picture of the Andromeda galaxy (pictured up top) earned him the overall top prize of £10,000 ($12,860). Lefaudeux’s composition makes it appear as if the Andromeda galaxy—the closest galaxy to our own—is at arm’s length, even though it’s 2 million light-years away. The photographer created this tilt-shift effect by 3D-printing a part that held the camera at a key angle, while the blurring effect was created by a defocusing the outer edges of the photo. 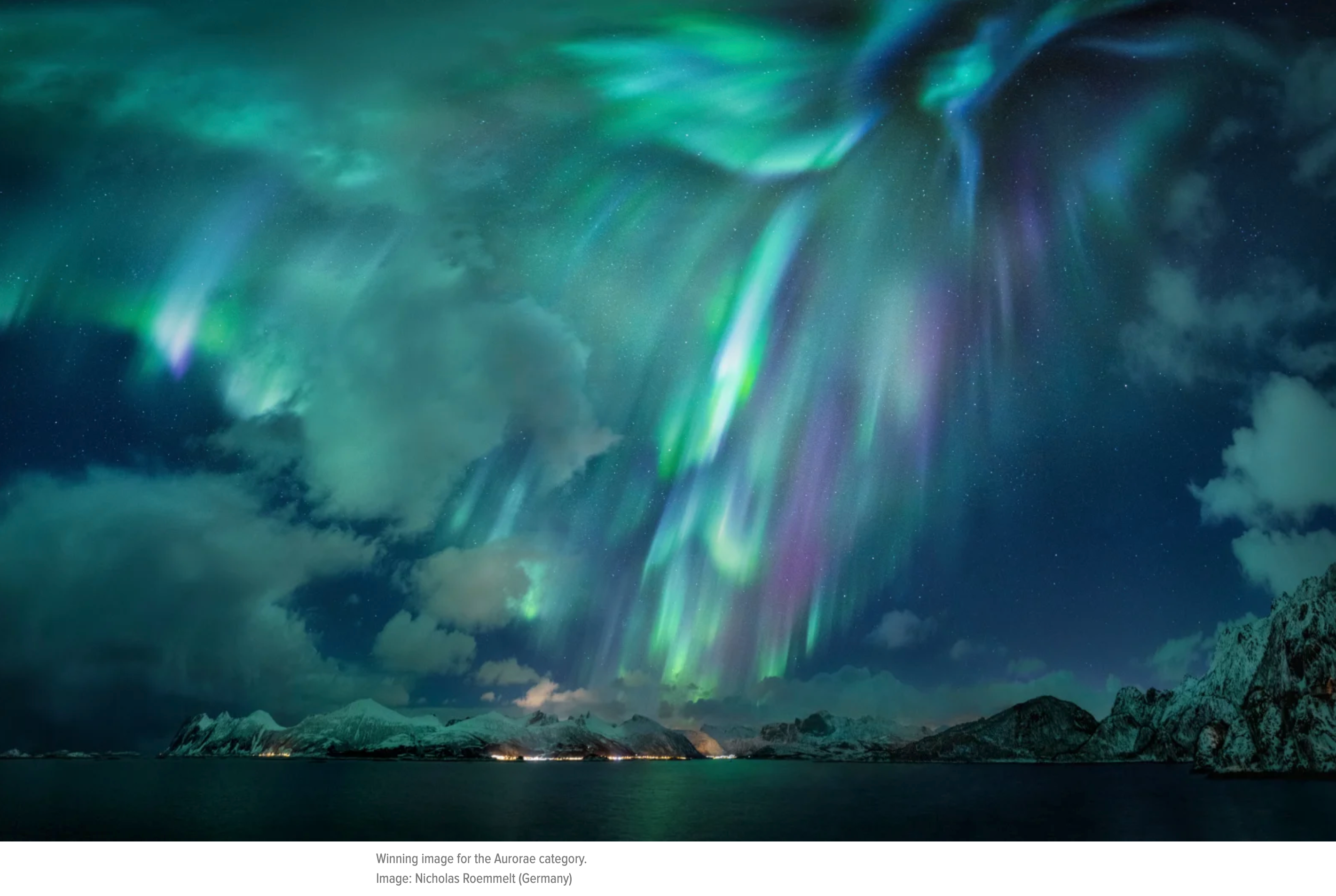 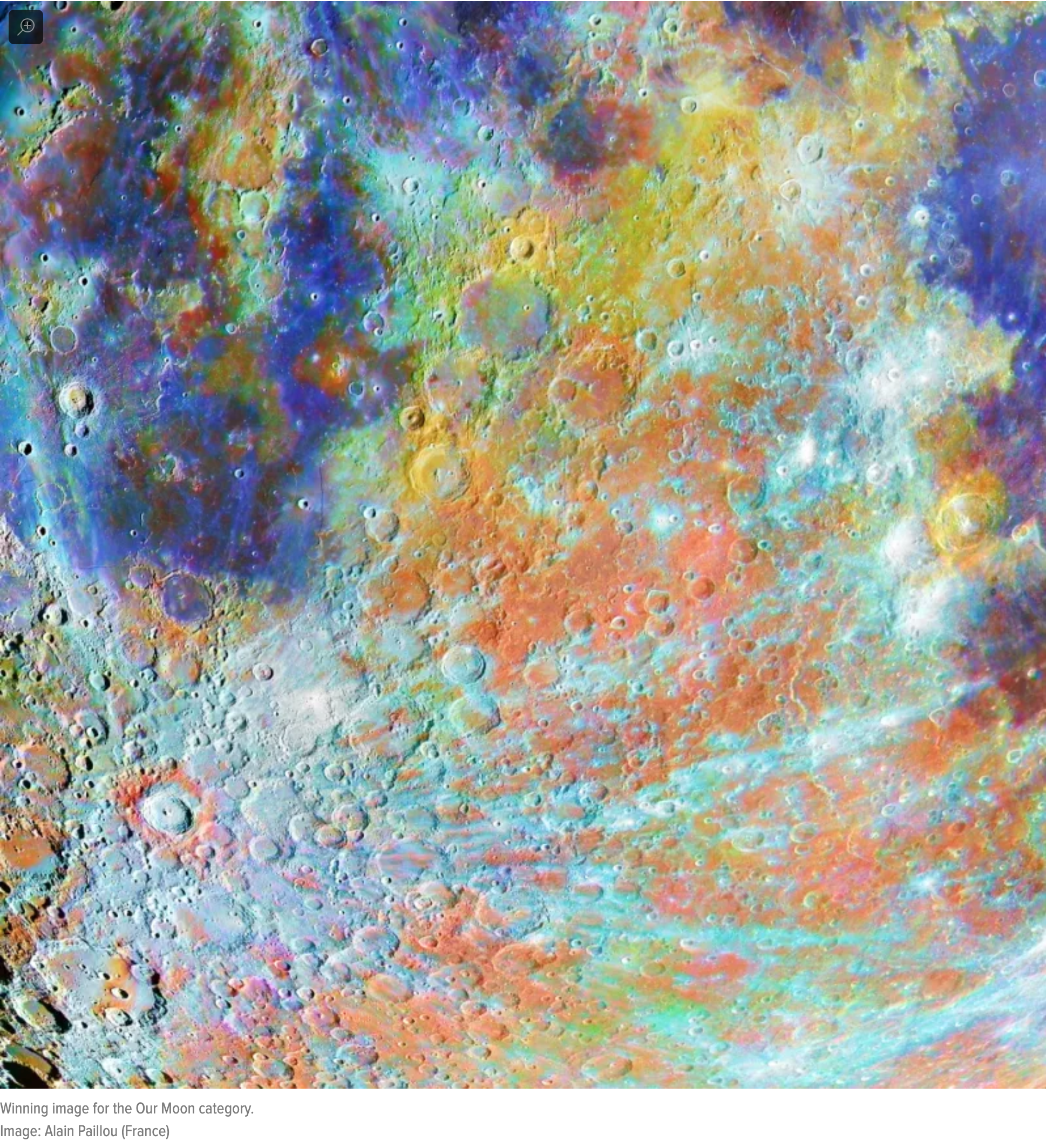 The hidden colors of Tycho crater on the Moon are revealed in this vivid composite photo taken by Alain Paillou. The colors of the soil, though faint to the unaided eye, are produced by metallic oxides embedded within small balls of glass strewn across the lunar surface. Blue areas are rich in titanium oxide, while the red areas are high in iron oxide. 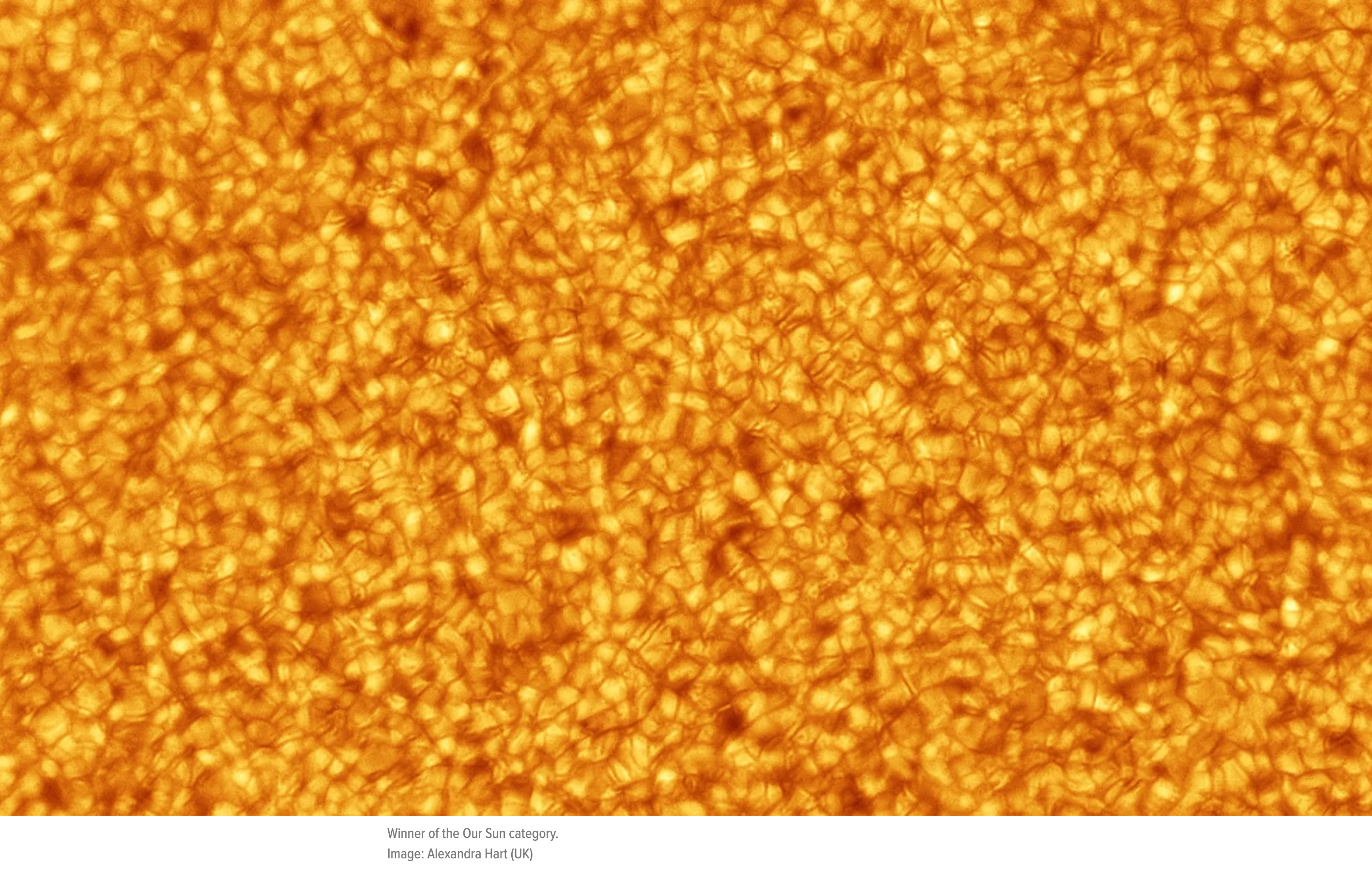 This incredibly detailed view of the Sun’s surface, seen during its solar minimum, was captured by UK photographer Alexandra Hart. Each of those convection cells seen in the photo measure around 600 miles (1,000 km) across.

The Prison of Technology 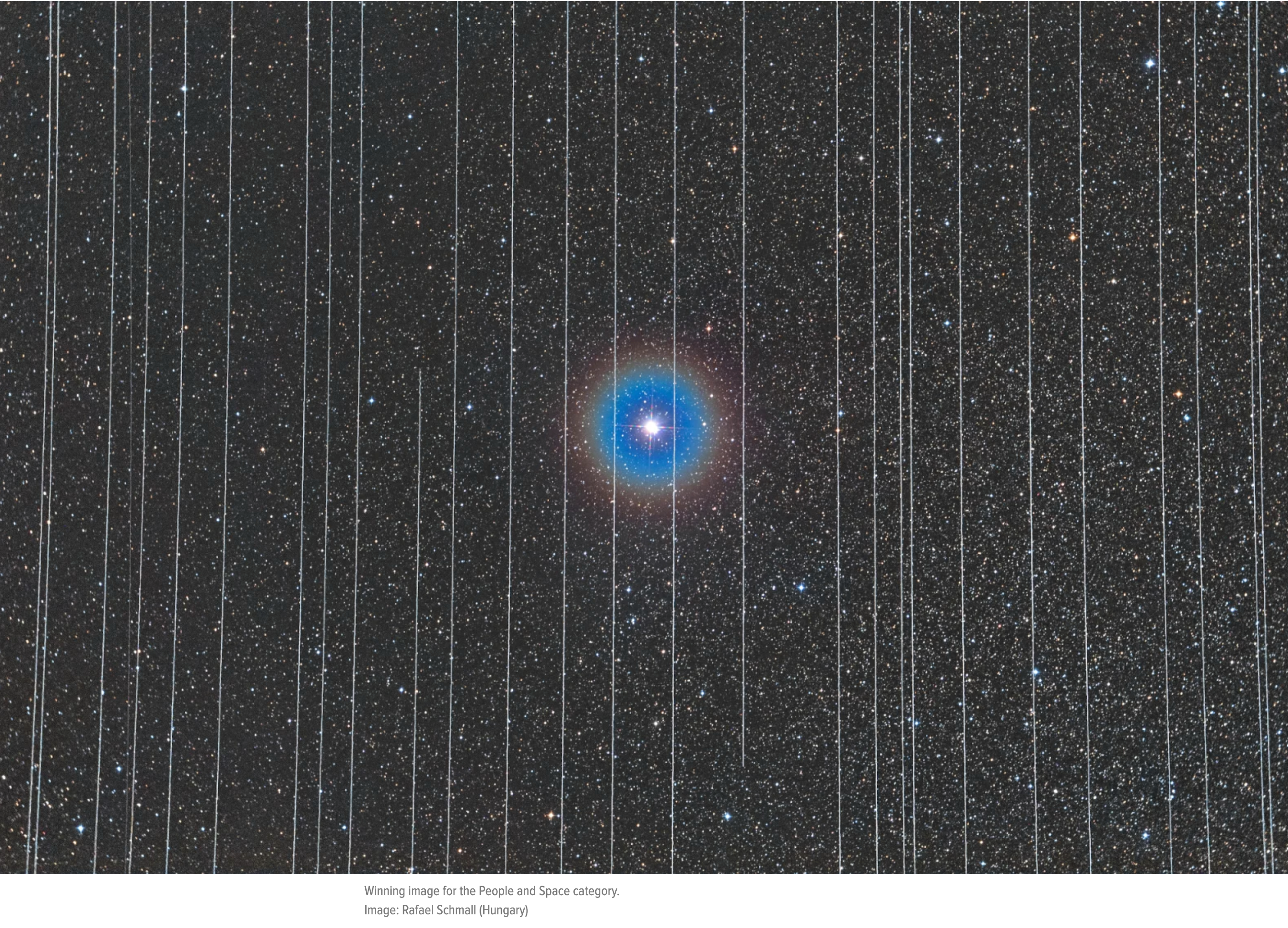 This image, captured by Rafael Schmall, is a perfect—though unfortunate—example of how satellites are increasingly making it difficult for photographers and astronomers to gaze upon an unobstructed sky. Here, the Albireo double star sits behind a set of satellite trails, which appear when taking long-exposure photographs. 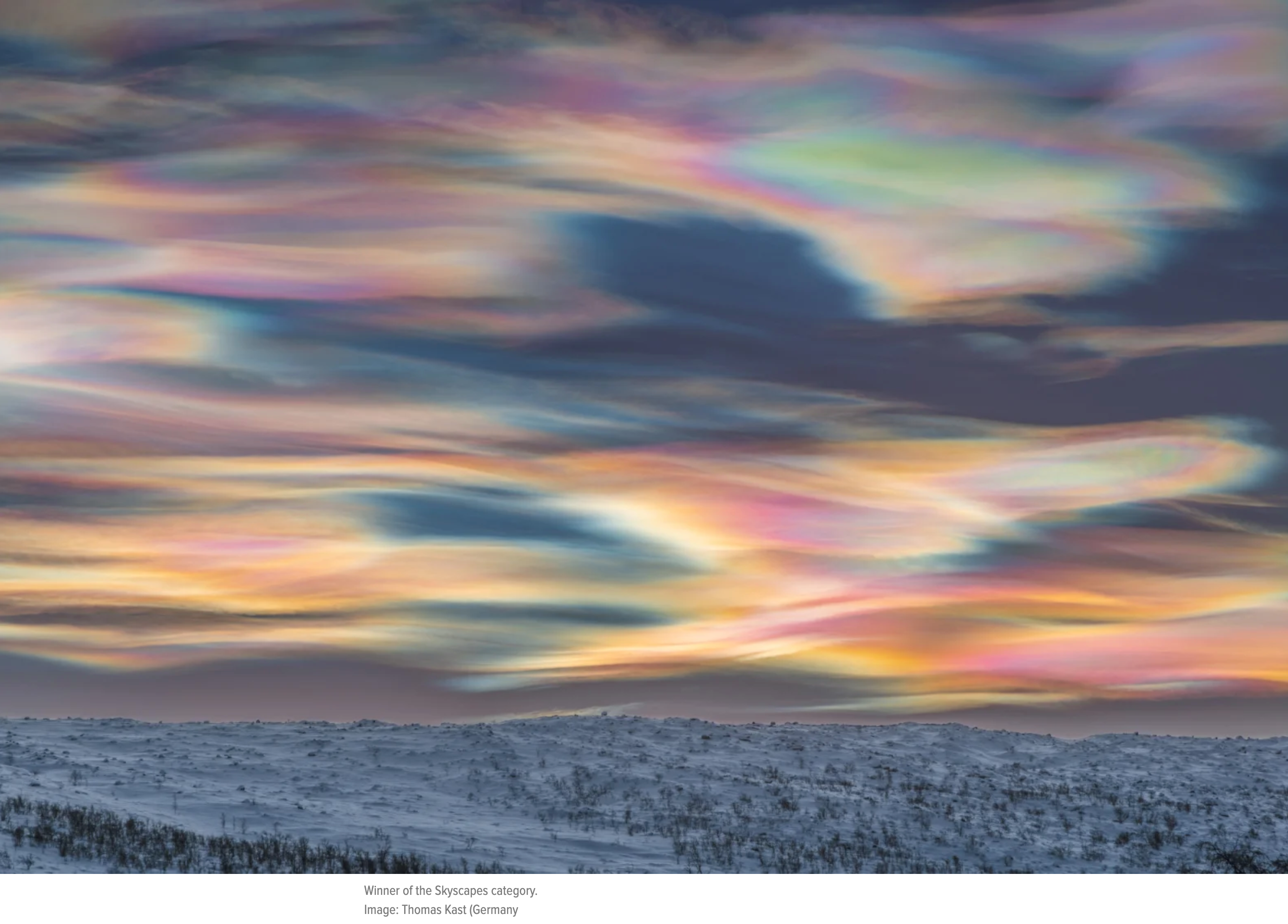 The polar night, as seen by photographer Thomas Kast in Finnish Lapland. This unreal skyscape looks like something right out of a Monet painting, but the dramatic effect is produced by polar stratospheric clouds. Ironically, Kast was actually looking to photograph clear skies at night when this incredible view suddenly appeared. 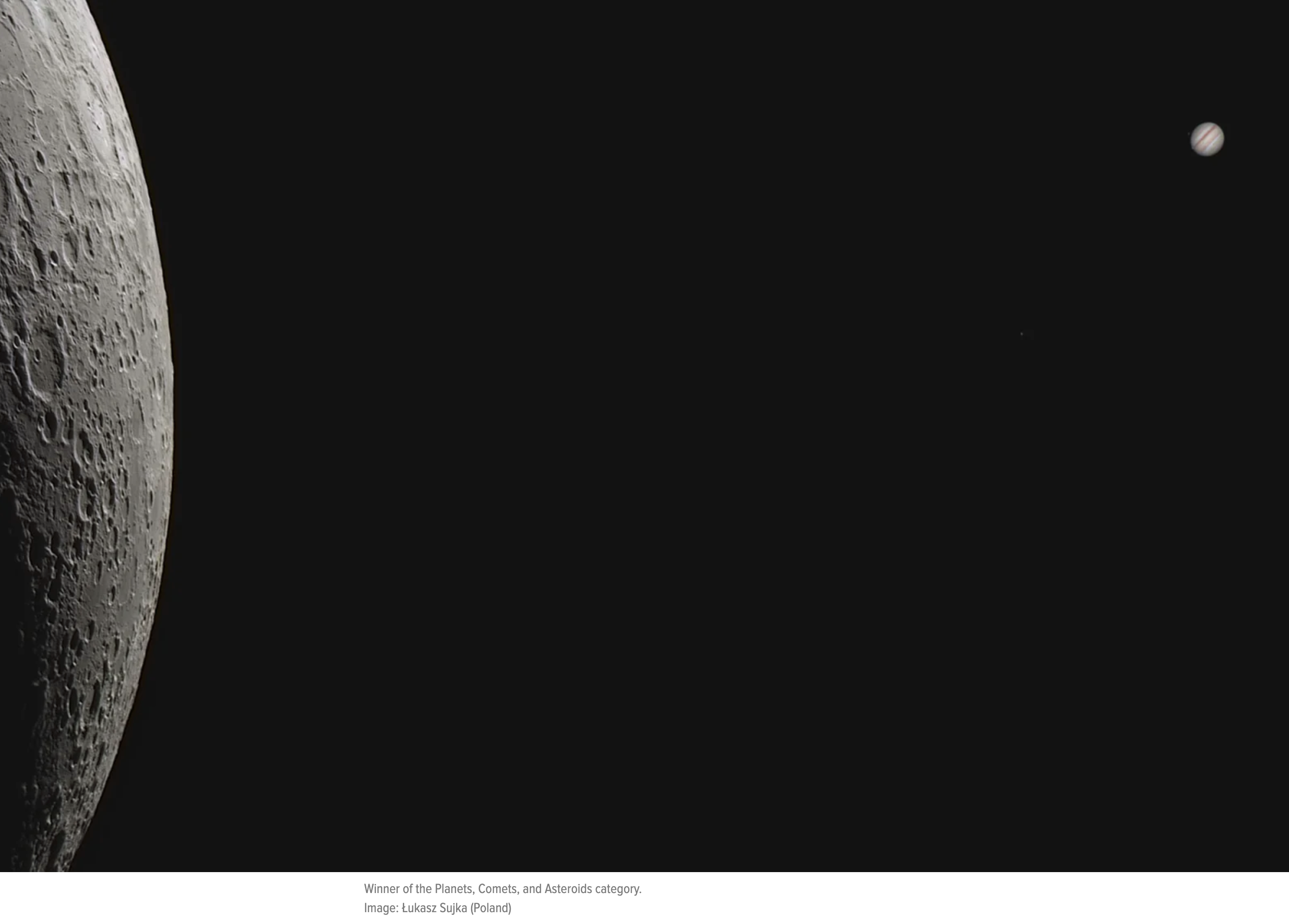 Polish photographer Łukasz Sujka snapped this unusually close alignment of Jupiter and the Moon on October 31, 2019. Sujka said he “wanted to show the huge emptiness and the size of space, which is why there is a lot of ‘nothing’ between the two major parts of the image,” as he said in a press release. 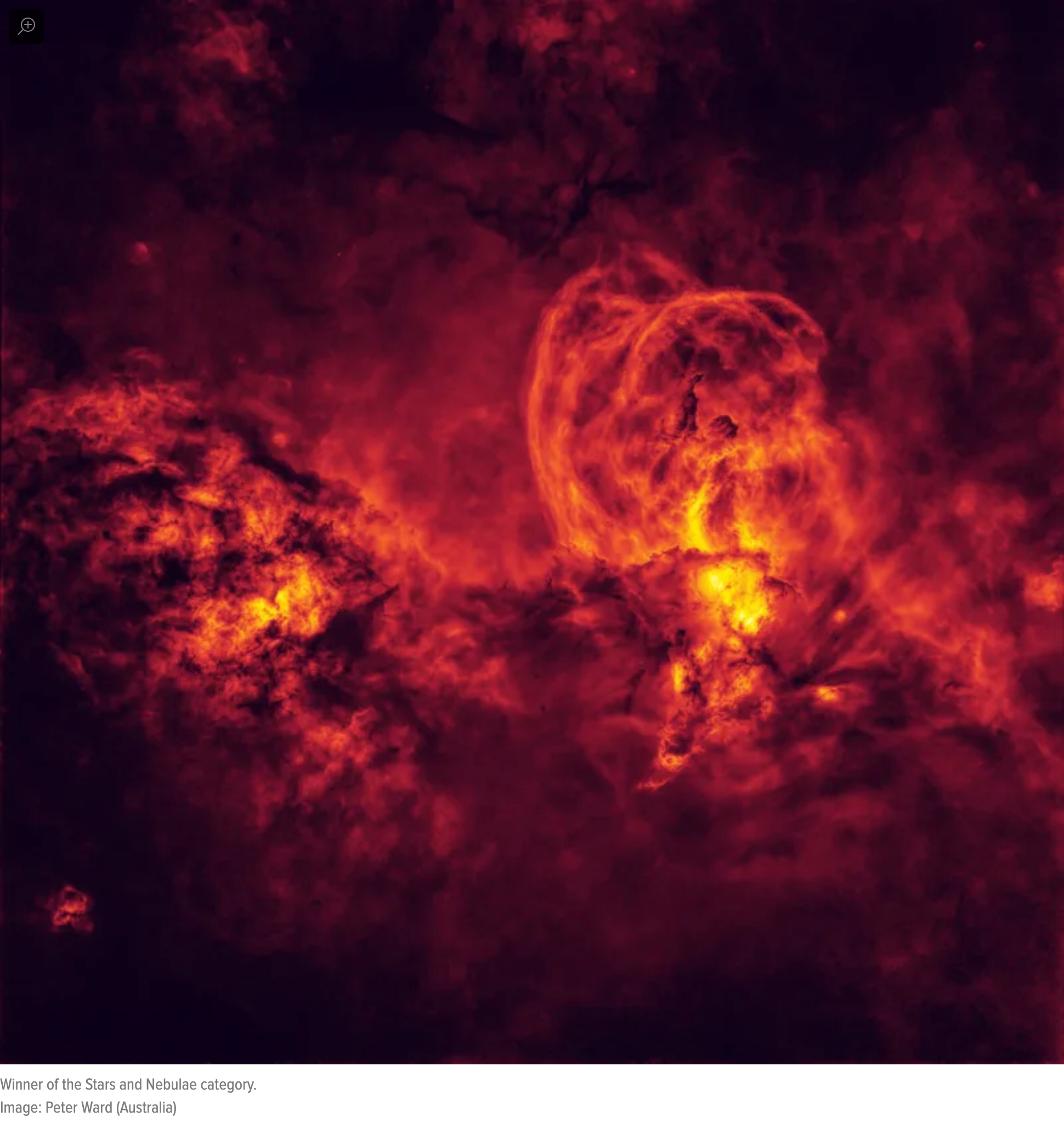 A unique false-color view of NGC 3576, in which the stars have been removed from this nebula by the photographer, Peter Ward. The point of this exercise was to emulate images taken of the Australian wildfires in 2019 and 2020.

The Four Planets and the Moon 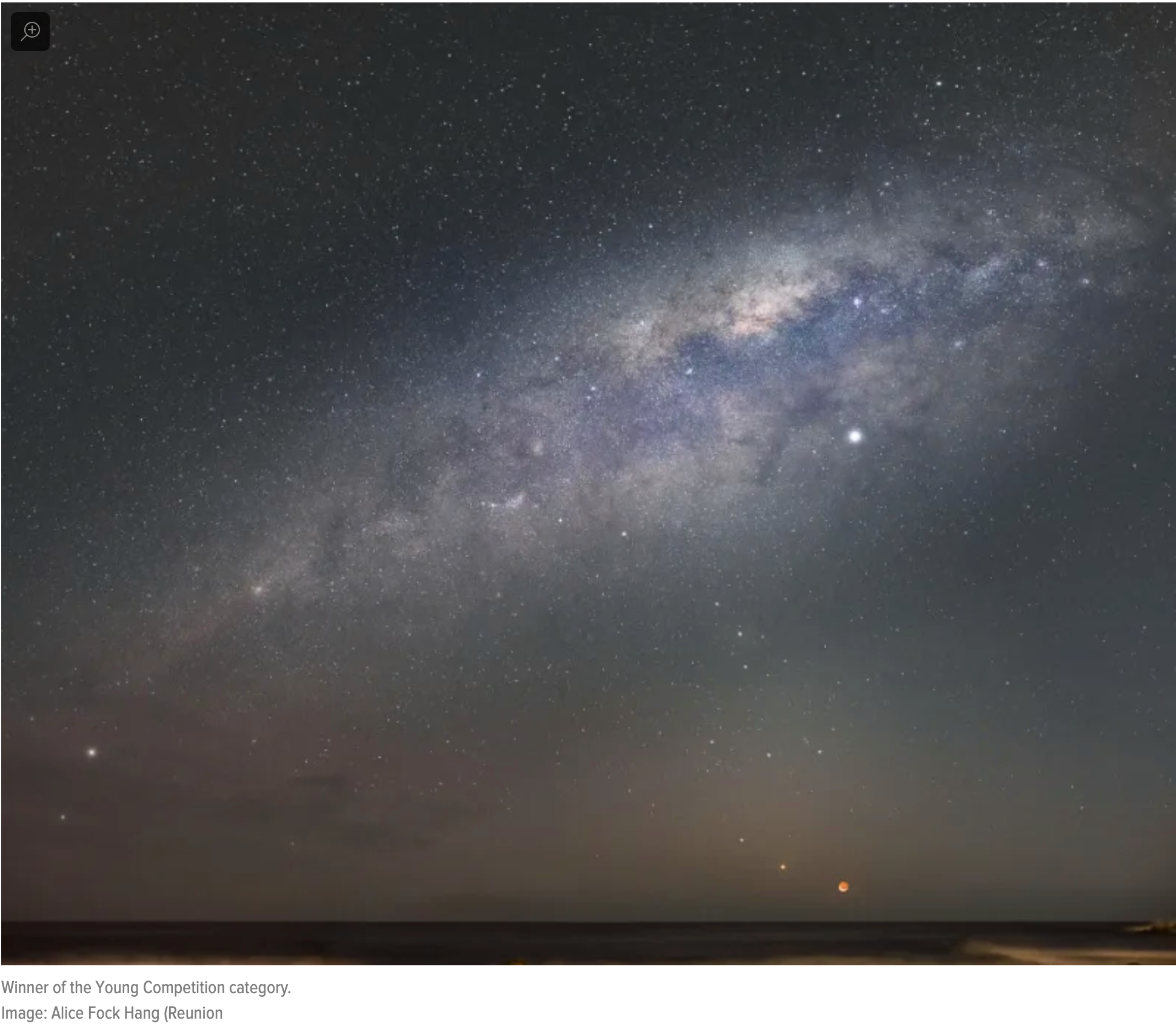 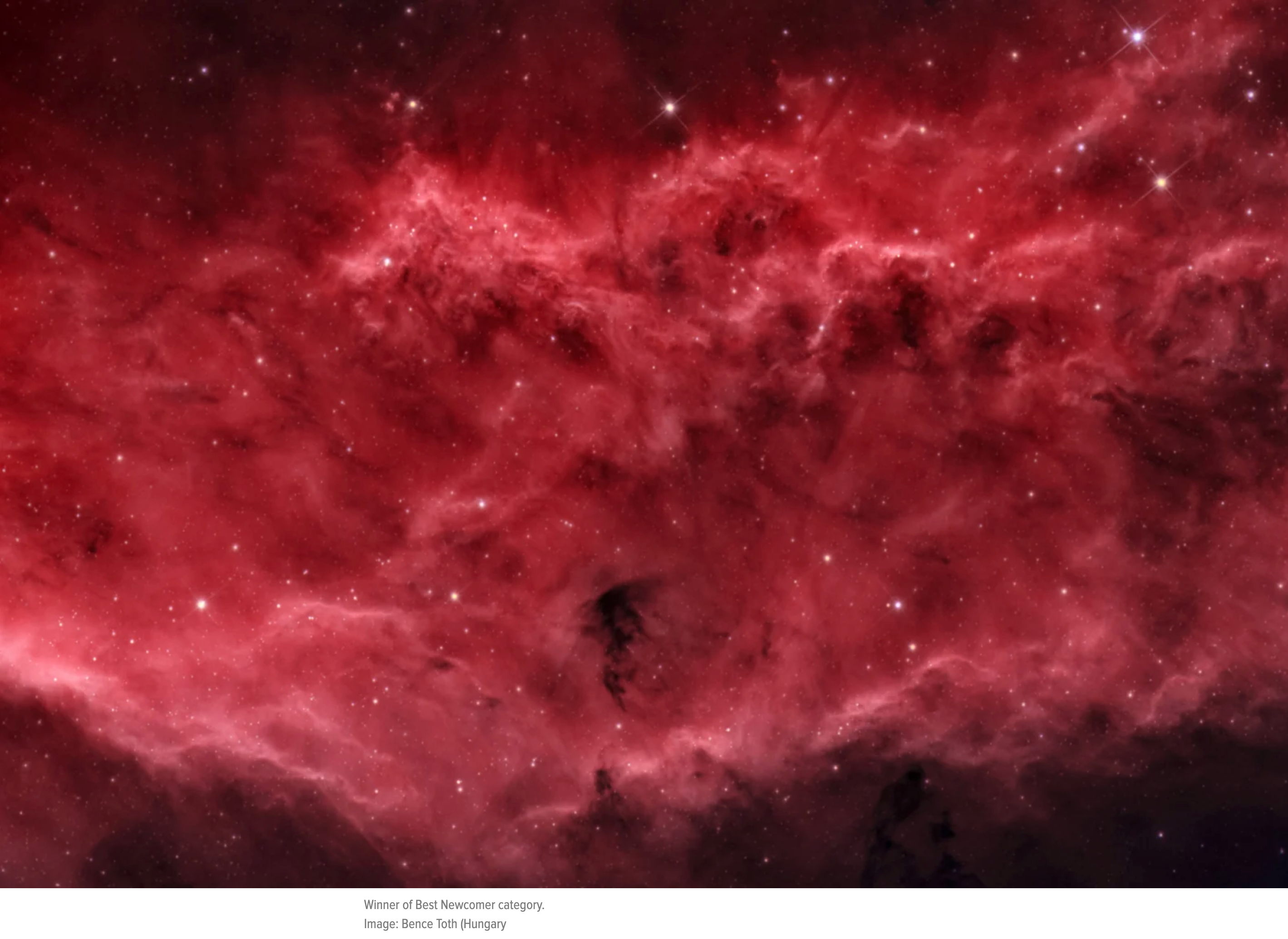 A remarkable view of the California Nebula, or NGC 1499, in which photographer Bence Toth strove to preserve the original colors of this star-forming region to the greatest extent possible. 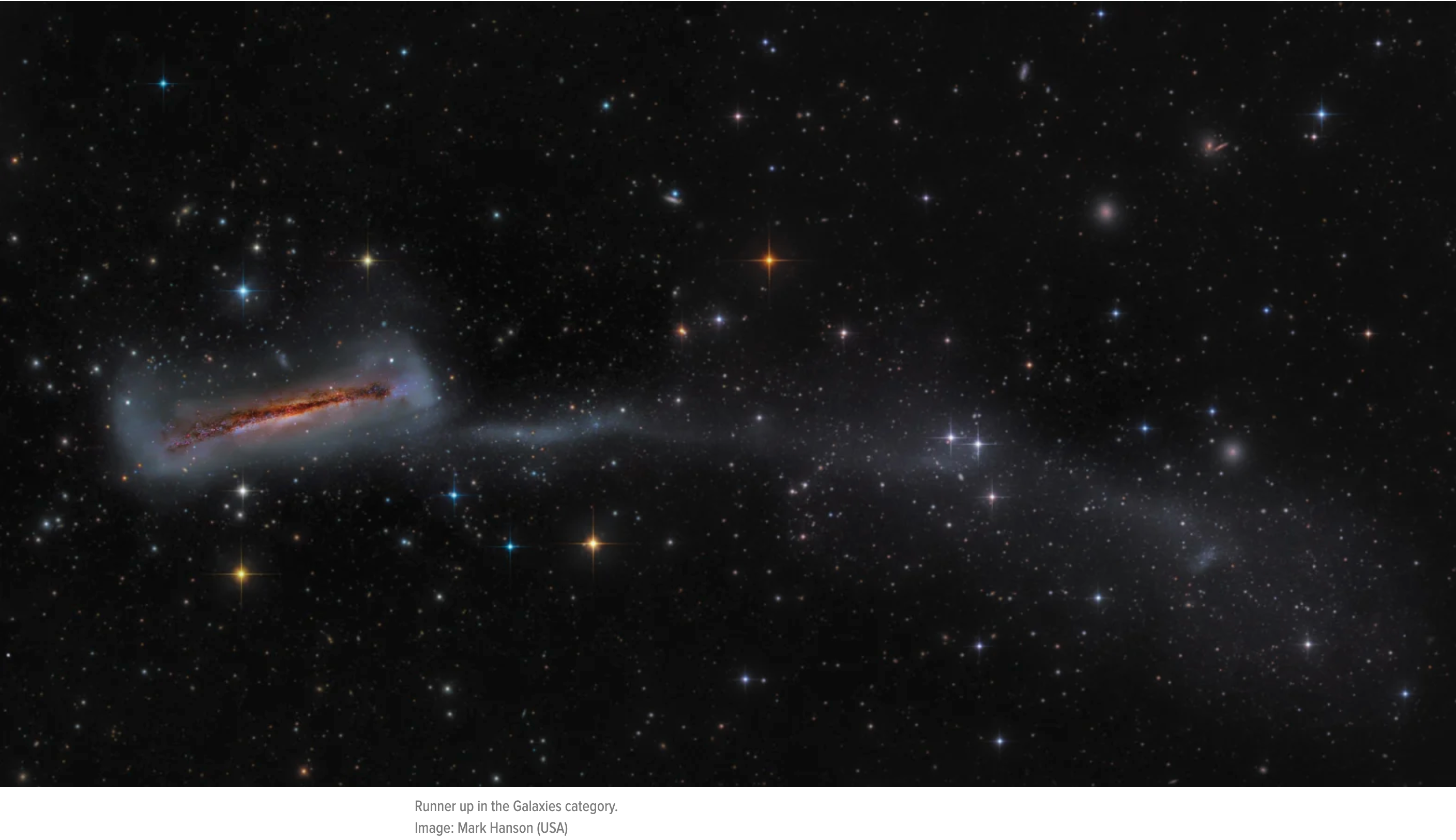 It took photographer Mark Hanson five years to produce this stunning image of galaxy NGC 3628, with most exposures acquired in 2019. The purpose of this mosaic image, and the primary challenge, was to show the galaxy’s colossal tail, which measures 300,000 light-years in length. 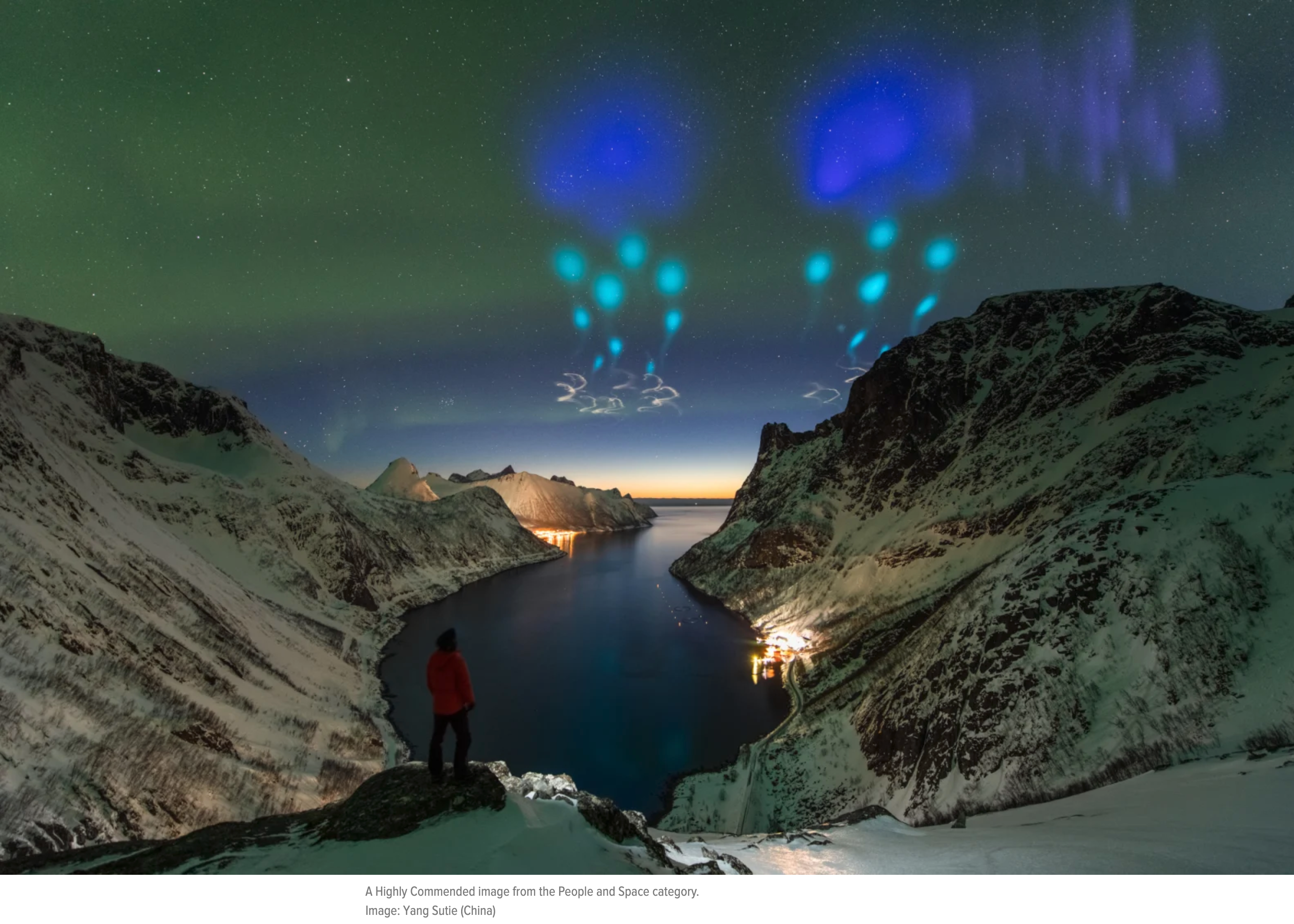 This isn’t an alien invasion, but it’s not a wholly natural occurrence, either. This sight, photographed by Yang Sutie in Arctic Norway, captures the bright remnants of the Auroral Zone Upwelling Rocket Experiment (AZURE), in which rockets launched from the Andøya Space Centre dispersed gas tracers to probe winds in Earth’s upper atmosphere.

All winning entries will be showcased at the National Maritime Museum starting on October 23, 2020.

Goofing off is good for kids—here’s the evidence It's important for successful adult-ing, experts say. By Molly…