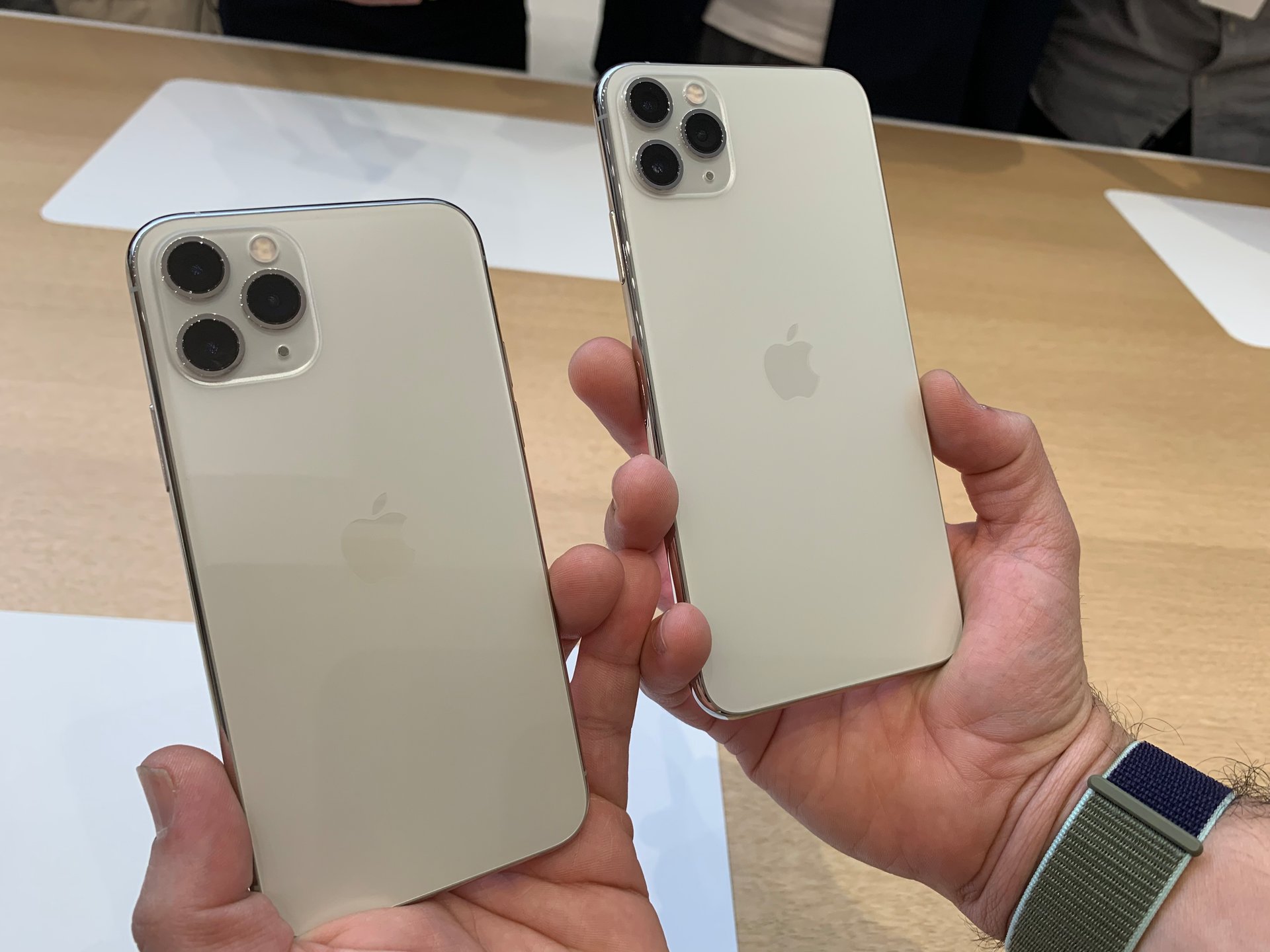 Here's a brief look at what it's like to use them.

CUPERTINO, California — Apple just unveiled its new trio of iPhones: the iPhone 11, iPhone 11 Pro, and iPhone 11 Pro Max. All three phones are available to order starting September 13 ahead of their official launch on September 20.

The cameras on Apple's newly launched iPhones are undoubtedly the main attraction. The $700 iPhone 11 features a two-lens camera setup, while the pricier $1,000 iPhone 11 Pro and $1,100 Pro Max include triple-lens cameras.

I spent a few minutes with Apple's new iPhones after the company's press event. Here's a brief look at the features and characteristics that stood out to me the most.

The camera is going to be the main reason people buy these phones.

The iPhone 11, 11 Pro, and 11 Pro Max bring improvements when it comes to general performance, battery life, and durability.

But it's the camera that really stands out.

Both phones come with a slew of new photography-oriented features, like a new 120-degree ultrawide camera that can capture wider scenes, Night Mode for taking better photos in the dark, slow-motion video capture for selfies, and Deep Fusion, which processes photos pixel by pixel. That feature is coming later this fall.

The camera is a noticeable part of the design too. 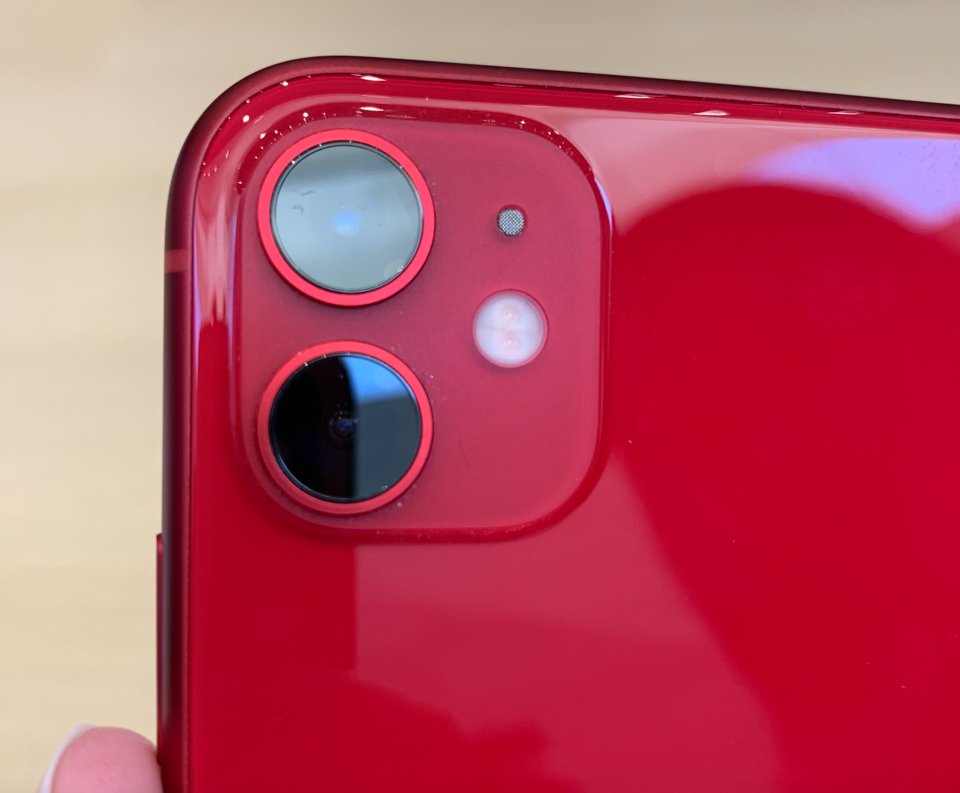 If you're ever having trouble spotting the difference between an iPhone XS and an iPhone 11, the camera sensors will be a dead giveaway. All of Apple's iPhones have a larger new cutout for the camera sensor that resembles a square with rounded edges. The camera lenses themselves are also larger than the ones on Apple's previous-generation iPhones.

Make no mistake: The camera is more noticeable on the iPhone 11 lineup than on any other iPhone, or perhaps any smartphone I've ever seen. It's definitely a departure from Apple's usually sleek and minimalist style. But it also screams that this phone is known for its cameras, which is also probably exactly what Apple wants.

The usefulness behind Apple's new ultrawide lens isn't just about the camera but also the software that goes with it. 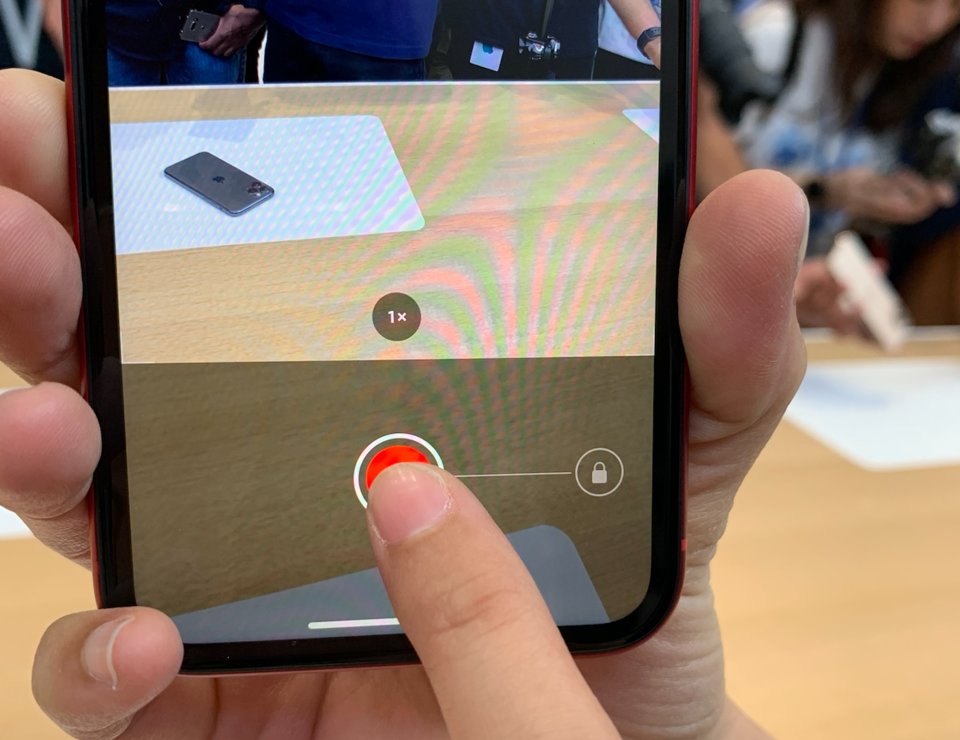 During my time using Apple's new iPhones, it was the tiny details in Apple's camera software that impressed me the most.

The camera will automatically switch to its ultrawide-angle camera if the phone is tilted from portrait to landscape mode, for example. That's because the software assumes that you're probably trying to capture a wider shot, since you changed the phone's orientation. In my experience, this worked just about instantly, with no noticeable lag.

The iPhone 11, 11 Pro, and 11 Pro Max also come with a new feature that lets you switch between camera and video mode just by holding down the shutter button. But when you do this, you'll notice that a tiny lock symbol appears to the right of the button, signaling that you should slide the button over to keep recording.

It's a subtle software flourish that feels classically Apple. It's reminiscent of the way the slide-to-unlock logo on the iPhone's old lock screen used to illuminate in the same direction in which you needed to swipe to unlock the phone, guiding you along the way.

The iPhone 11 Pro's new matte finish will probably make it easier to use your phone without a case. 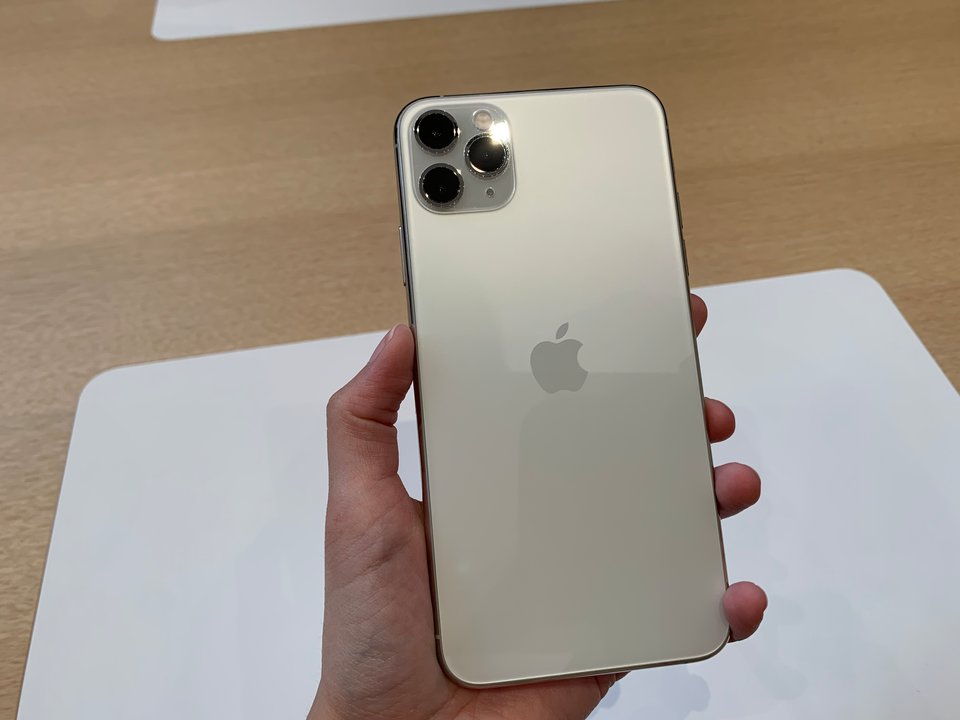 The matte finish represents a noticeable shift from the glossy backs on Apple's iPhone XS family of smartphones. The new texture makes it easier to grip the phone, which could prevent accidental drops, and the matte look also seems like it would be less susceptible to fingerprint smudges. That could make the iPhone 11 Pro all the more tempting to use without a case, especially considering Apple says these phones have the toughest glass ever in a smartphone.

But at the same time, the iPhone 11 Pro and Pro Max are also a bit heavier than their predecessors, and you can certainly tell.

The iPhone 11 Pro's screen is brighter, and it's immediately noticeable. 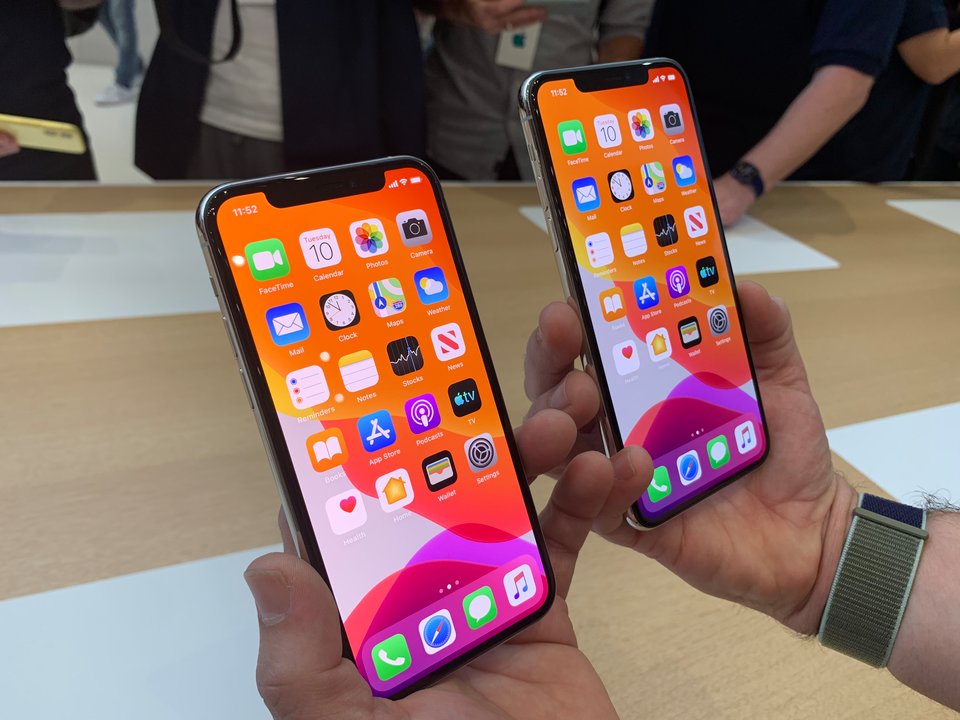 The iPhone 11's colors will be a big draw for many people. 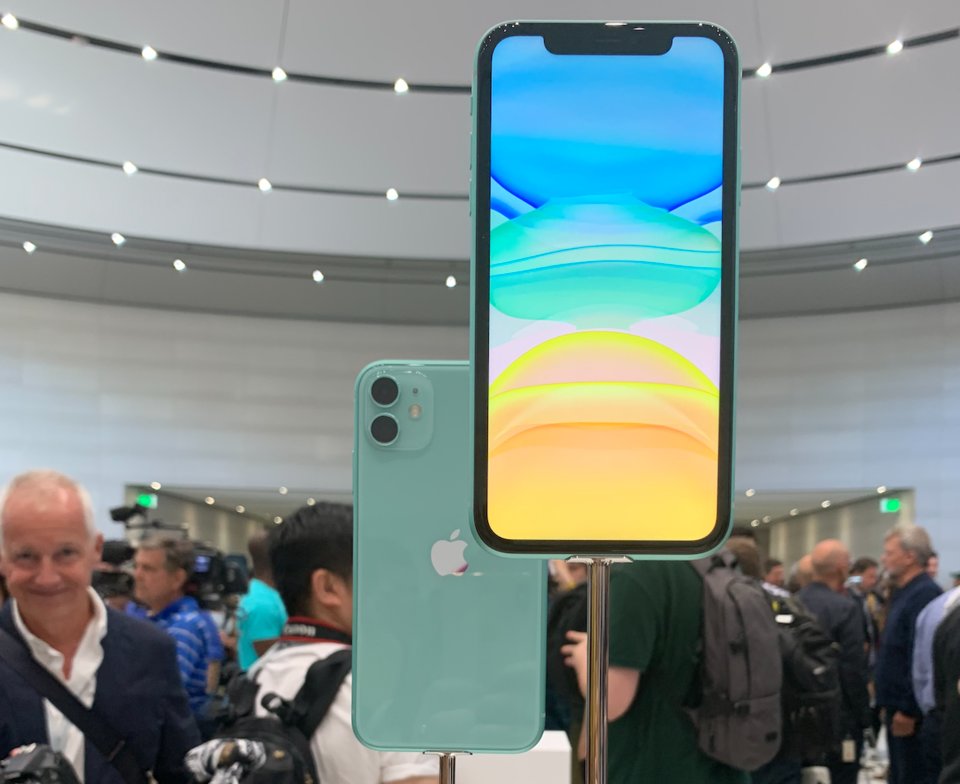 Like the iPhone XR, Apple's new iPhone 11 comes in a variety of colorful choices, including purple, yellow, green, black, white, and Product Red.

It feels like Apple learned a lot from the iPhone XR and used that to inspire the iPhone 11. 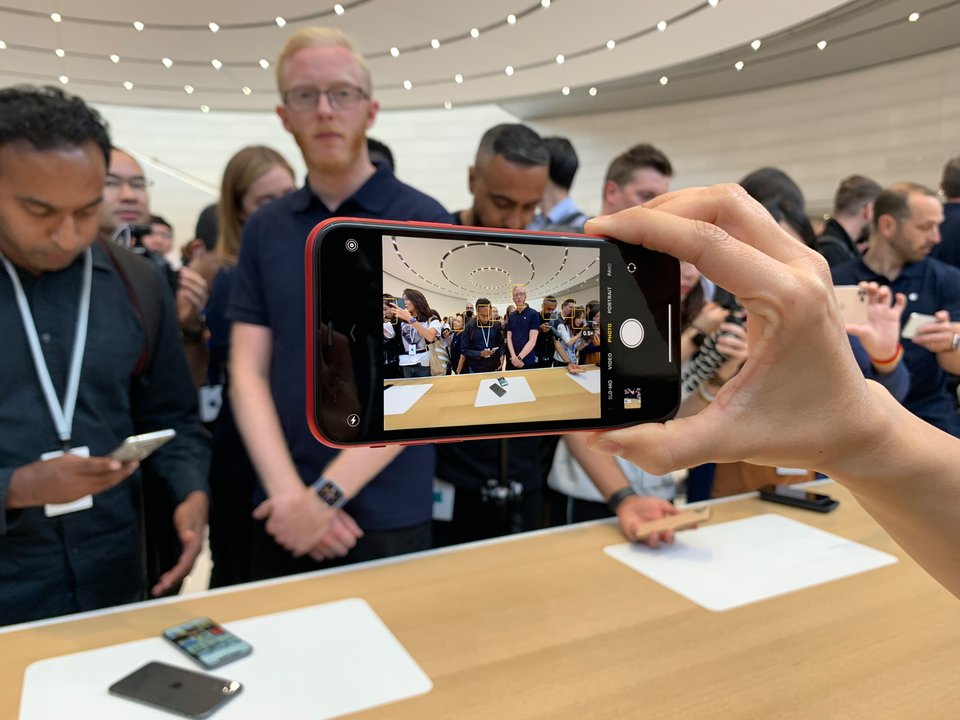 It feels like Apple is positioning the iPhone 11 as the new flagship iPhone and the iPhone 11 Pro and Pro Max as the professional-grade models geared toward power users. And given the iPhone 11's $700 price point and colorful design, there's no doubt that it feels like a successor to the iPhone XR.

That indicates Apple has learned a lot from the iPhone XR's success. For example, Consumer Intelligence Research Partners reported that nearly half of Apple's iPhone sales in the third quarter of 2019 were from the iPhone XR. That's even despite the fact that Apple was widely expected to launch new iPhones following its third quarter.

With the iPhone 11, it feels like Apple is leaning into the characteristics that made the iPhone XR successful: offering important features like a decent camera, an all-screen design, and long battery life at an affordable price point.

Instead of positioning this as a low-cost version of the flagship iPhone, it feels like this is the flagship iPhone. The Pro models, meanwhile, seem to be geared toward people that use their phones for professional photography and need longer battery life and a better OLED screen.

Throughout history, people’s faith and their attachments to religious institutions have transformed, argues Sumit Paul-Choudhury. So what’s…