You'd think we'd eventually run out of the kind of depraved, homicidal maniacs that make this particular article premise possible year after year. And maybe, hopefully, we will one day. But this is not that day. Here is a small sample of this world's many violent maniacs, whose vile actions would give Freddy Krueger pause, turn Jason Voorhees' stomach, and make Michael Myers blush (he's the shy one).

Michigan resident Jason Dalton is obviously a pretty terrible example of a human being, having shot six people to death for seemingly no reason, and badly injuring two others (including a little girl). But as an Uber driver? He was ... fine, actually. Only one of his passengers reported being creeped out by him, which is probably some sort of record.

What the media later dubbed "One Night of Terror" started off normally when Dalton picked up his first ride. The passenger recalled that all seemed fine, until Dalton received a (completely boring) phone call, hung up, and started driving like a man with a death wish, sideswiping a car and speeding into oncoming traffic lanes. So far, still sounds like a relatively normal Uber ride, right? 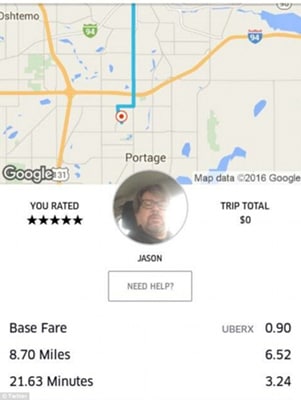 But things turned weird when the passenger confronted him. Dalton reacted with complete calm, denying that he had done anything out of the ordinary. After the passenger managed to escape, Dalton drove to his house to swap cars. And get his gun.

Over the next few hours, Dalton drove around shooting random bystanders and then driving off to pick up passengers. Those who rode with him later said that he was totally normal, chatting with them and sometimes even singing along with the radio. In one case, he shot a woman only after she confirmed that she was not the person he was supposed to pick up. Such was his devotion(?) to his clients. By the time the cops found him, the pendulum had swung back to "strangely calm," and he didn't resist arrest.

When asked why he did all this, Dalton explained that the symbol on his Uber app had changed to that of the Eastern Star (a masonic group his grandmother belonged to). Dalton further claimed that the red driver's icon on his app kept turning black and Devil-like, causing the app to take over his body and make him kill people. He was later deemed competent to stand trial. Hopefully Uber has gotten around to fixing that whole "satanic possession" bug by now.

5 "The Crossbow Cannibal" Killed Someone Right In Front Of A Police Camera, Then Gave It The Finger

PhD student Stephen Griffiths nicknamed himself "The Crossbow Cannibal," and it turns out that was a perfectly serviceable name. If he's accepting constructive feedback, however, we'd like to suggest he add "Candid Camera" into the name -- keep the whole alliteration thing. Because, on top of chasing women with a crossbow, chopping them into pieces, and devouring them, he committed his crimes fully aware that they were being caught on a security camera. We know this because he flipped said camera off.

Anyway, in case you were ever curious about what a serial killer's face looks like during a murder, this image will help you (though we should say "help" is a relative term here): 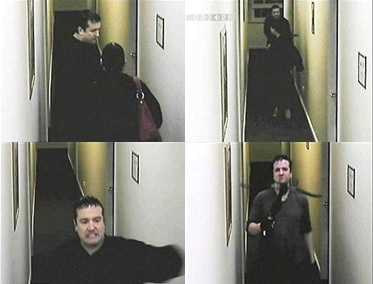 Is there such a thing a too much evidence?(Image: West Yorkshire police)

The cameras were installed in the first place because the police were already suspicious of him after seizing some of his weapons and observing him poring intently over books on human dismemberment. But apparently, they still didn't have enough evidence to do anything but wait for him to strike again. Oh, and we should also mention that his doctoral thesis was called Homicide In An Industrial City: Lethal Violence In Bradford 1847-1899. Because his alternate title, Evidence: All The Evidence You Need To Arrest Me, Good God, What Are You Waiting For? seemed a bit unwieldy.

French couple Michel Fourniret and Monique Olivier's modus operandi was all about family. Olivier would pose as a worried mother and use their infant son as bait to lure victims into the clutches of Fourniret, who "needed to hunt virgins twice a year." Apparently "super obviously a vampire" wasn't a relationship dealbreaker for Olivier, who happily assisted.

Olivier was Fourniret's third wife, after his first marriage ended with his arrest for child molestation and rape charges scuttled the second. Olivier started out as Fourniret's prison pen pal, but their relationship blossomed when she agreed to assist him in his "virgin hunt" if he would help her murder her husband. But with all the brutal killings they carried out over the years (at least nine, probably more), Fourniret never got around to offing Olivier's ex, which we believe constitutes solid grounds for a divorce.

British carpenter John Sweeney was known as "The Canal Killer," due to his penchant for dumping mutilated corpses into bodies of water. But eventually he became "The Sketchbook Killer" because of, well, this stuff: 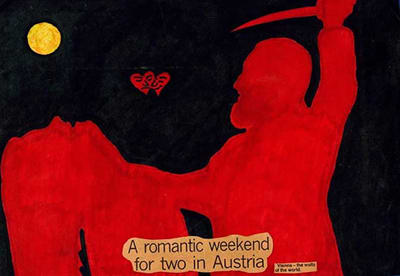 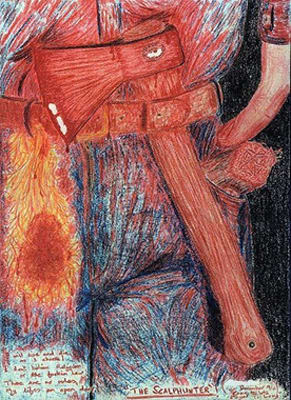 "As you can see, my client is a simple woodsman who happened to get a scalp caught on his pants on the way to church."(Image: John Sweeney)

Don't worry if art is not your thing. We'll decipher it for you: That object on the left is a bloody human scalp. It symbolizes the artist cutting off someone's scalp.

Sweeney was convicted for the murder of two women (and is suspected for three more), including Netherlands resident Melissa Halstead, whose head was never found. How did they know Sweeney was the killer? Well, he also wrote some terrible poetry, with verses like "Poor old Melissa, chopped her up in bits, food to feed the fish, Amsterdam was the pits." Then he drew a headstone with the words "RIP Melissa Halstead." Oh, and Halstead had told her sister that if someone ever murdered her, the culprit would definitely be John Sweeney. The subtle clues ... they're all coming together!

Naturally, it only took, uh, ten years to arrest him, and ten more to convict his ass. He still denied that his creative endeavors had any relationship to his homicides, which must have been hilarious when the prosecution hauled out hundreds of lurid paintings with titles like "Never Die Till I Kill You," "Crimes Of Passion," and "A Wanted Man." Here's one drawing of Sweeney's ex-girlfriend (who narrowly avoided death by ax) as a cockroach about to be squashed under his boot: 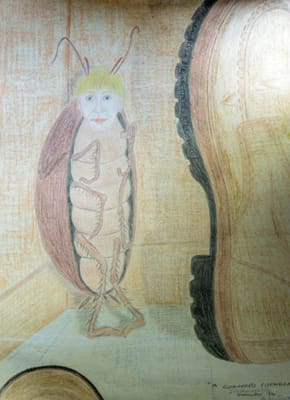 "No, 'Cockroach' was just a fun pet name. And by 'Kill you' I meant … ah, screw it. They have crayons in the prison commissary, right?"(Image: John Sweeney)

2 "The Scorecard Killer" Kept A Cryptic List Of Kills, And We Have No Idea Who Most Of The Victims Were

Randy Kraft was a hardcore conservative back in the 1960s (his former schoolmates described him as somewhere to the "right of Attila the Hun"). Then he suddenly came out of the closet and traded his post in the Air Force for bartending gigs in Orange County gay clubs. It'd be an inspiring story of self-discovery, if it wasn't for the fact that he also started murdering people.

Targeting mostly marines, Kraft would lure in his victims with promises of booze, free accommodation, and/or sex with a woman, at which point he would dope them up and, well, you've read the rest of this article, you can guess what followed. What makes Kraft stand out amongst other serial killers is that he treated murdering less like a hobby and more like a full-time job, complete with photographic documentation and a long "scorecard" of victims, which he dutifully maintained for 11 years. 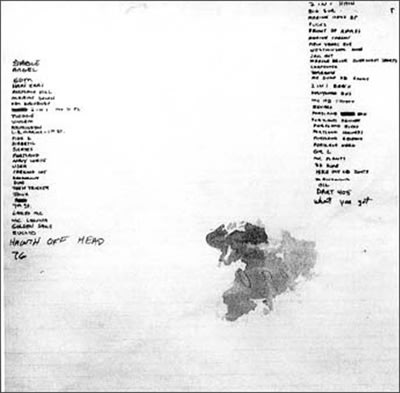 Some entries on Kraft's scorecard simply stated his victim's partial names or initials, but others were more cryptic. "Marine Head BP" referred to a military recruit whom Kraft decapitated in Buena Park. "Twiggie" was a 19-year-old found with a "4-foot-long twig ... stuffed into a body cavity." A few list items start with "2-in-1," suggesting grisly three-ways.

Kraft was eventually caught in 1983, after being pulled over for drunk driving with a half-naked corpse in the passenger seat. Although he was eventually convicted of killing 16 men, the list suggests a total of 67 murders, and he has refused to help identify the dozens of unsolved items. Surprisingly, this murderous psychopath is also a jerk. Who would'a guessed?

Animal rights groups had been on Magnotta's ass since 2010, when he uploaded a video of himself torturing two tabby cats called "1 boy 2 kittens." We're not gonna show it here, but we will show you something almost as disturbing: his audition tape for a modeling reality show.

Authorities began an investigation into his animal cruelty videos on YouTube, but didn't arrest him. After all, it's not like torturing animals is a common precursor to killing humans or anything. In 2012, Magnotta posted a Craigslist ad seeking a partner for some fun bondage, and a Chinese student named Jun Lin got in touch. This being Craigslist, you already know things did not go well. Lin went over to Magnotta's apartment and was never seen alive again. The very next day, a video named "1 Lunatic 1 Ice Pick" (creative titles weren't his forte) was uploaded to a Canadian gore site. It showed Magnotta stabbing Lin, dismembering him, and having sex with his dead body. According to police, an extended version exists also showing some cannibalism, but apparently Magnotta was saving that for the director's cut.

Once again, the cops didn't seem terribly concerned about this gruesome online video business at first. That is, until chunks of Lin's body began showing up all over Canada. Magnotta had mailed Lin's hands and feet to various schools and political party headquarters, and his torso was found in a suitcase behind Magnotta's building. Surveillance footage showed Magnotta coming into his building with Lin, then leaving with mysterious trash cans.

A country-wide warrant was issued for Magnotta, who was off partying in Europe at that point. He was finally found when an internet cafe worker in Berlin saw him reading articles about himself, further proving that nothing good ever comes from Googling yourself. Or using Craigslist. Or YouTube. You know what, let's nuke the entire internet from orbit. It's the only way to be sure.

E. Reid Ross has a couple of books. Nature Is The Worst: 500 Reasons You'll Never Want To Go Outside Again and Canadabis: The Canadian Weed Reader are both available at Amazon and Barnes and Noble. Mike Bedard is a writer who keeps things much lighter over on his Twitter. Follow Zanandi on Twitter, if you dare.

BY MICHELLE STARR 9 OCT. 2019 Humans have been mining diamonds for a long time, but a new stone…