Looking to Past Pandemics to Determine the Future of Theater

Throughout most of Western history, plays typically went on hiatus when plagues hit. But could contemporary designers, or perhaps outdoor settings or spaced-out seats, provide novel solutions?

This past spring, the Berliner Ensemble, the distinguished German theater company founded in 1949 by Bertolt Brecht and his wife, Helene Weigel, gave future audiences a preview of what live theater might look like when the pandemic has passed and playhouses reopen for business. In a photo posted to the company’s social media accounts, gone were 70 percent of the seats in the famously ornate Theater am Schiffbauerdamm, most of them having been plucked from the ground like roots to bring about a sanitary and socially distant experience of live theater in the fall, when the ensemble hopes to open.

The images make for bittersweet viewing: There is the Schiffbauerdamm’s lavish neo-Baroque construction of which Brecht was so fond, replete with statuary, columns, arches and red plush, teeming with the history of the form’s halcyon days. And then there is our present reality, reflected in the theater’s newly prophylactic seating arrangement, a sort of jagged collection of singles and pairs, each at least five feet apart per German government ordinances. To imagine how it will appear filled, most especially to the eventual performer looking out into an audience only to see more floor space than faces, seems anathema to an art form that thrives on the distinct and irreproducible circulation of energy between actors and spectators. But the alternative, of course, is no theater whatsoever. 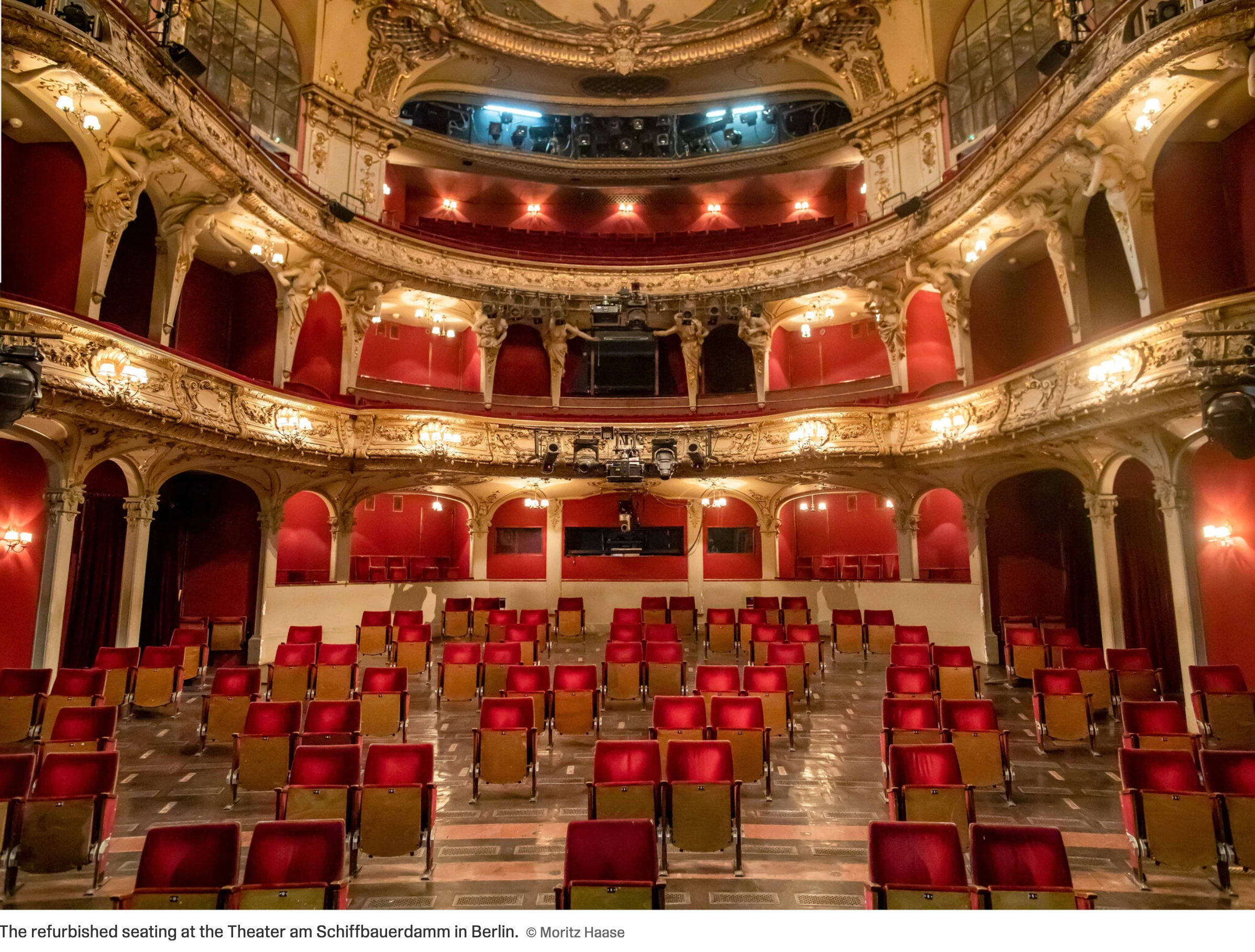 The inhospitality of most contemporary, purpose-built theater architecture to the physically distant imperatives of Covid-19 — a fact of their locations in dense urban areas and the more basic desire for a sense of artistic exchange generated only by closeness — is a question of both public health and architectural convention. “It couldn’t be more ironic,” says Richard Olcott, an architect who designed Stanford University’s Bing Concert Hall, which opened in 2013, among many other buildings. “The whole point of that building is intimacy, and getting everyone as close to each other and the musicians.” Accordingly, theater today, as during various plague outbreaks in the 16th and 17th centuries, and then again during the 1918 outbreak of the Spanish flu, must close its doors and weather considerable financial devastation, felt hardest by those companies operating without government subsidy, which includes most American theaters. The Broadway League, the industry’s national trade association, has said that performances will not resume before January 2021.

Little is documented historically about the ways our earliest thespians navigated the pandemics that afflicted their societies, from the Plague of Athens in Ancient Greece, which surfaced in 430 B.C., with subsequent spikes in 428 and 426, to the Plague of Justinian during the Roman Empire, which began in 541 A.D. and lasted some 200 years. But in the relationship between ancient theater architecture and nature, one can discern in the Greco-Roman school of thought a particular interest in creating the conditions for a salubrious experience of drama, even though the concept of physical distancing was not recognized then, as it is now, as the most surefire means of preventing disease transmission. Instead, open-air theaters were meant to foster a connection between drama and the natural world.

One could infer an association of theater with palliative properties in Epidaurus, the ancient Grecian city where healing sanctuaries — shrines to Asklepios, the healing god and son of Apollo — functioned as de facto hospitals. Near these shrines would have been the sprawling open-air theater thought to have been designed by the architect Polykleitos the Younger and celebrated by the Greek traveler Pausanias for its perfect symmetry and acoustics, the sensation of “virtual pitch” made possible, as a 2007 study by the Georgia Institute of Technology revealed, by its corrugated limestone structure carved into the side of the hill, which acted as a filter for sound waves at certain frequencies. Ancient inscriptions suggest the theater hosted literary, musical and athletic competitions and even mystery plays. As an extant example of a remote, outdoor theater flushed with fresh air, Epidaurus has become something of a touch point for theater producers, designers and historians looking to the past to find a way forward.

“The pandemic has opened our eyes to the possibilities that the architecture that we have received was born of different times and different imperatives,” says the celebrated British stage designer Es Devlin, 48, best known for the “stage sculptures” she’s designed for Beyoncé and Kanye West and the imaginative set designs she’s conceived for theatrical productions of “The Lehman Trilogy,” “Betrayal,” “American Psycho” and countless others. Devlin suggests a number of innovations that would not only orient our theaters toward the dictates of public health, but make them more welcoming and civic-minded, too, such as performance spaces that open up onto streets (the glass and aluminum extension added to London’s National Theater in 2015 is one example she cites), inviting fresh air; or a more comprehensive reimagining of how we use existing, purpose-built theaters, most of which still only open for one show an evening, making them disproportionately reliant on ticket sales. “I think it makes a lot of sense to look back at those original Greek theaters, which were very connected with nature. If you look at Epidaurus, the set design was the forest and the hills beyond the sky, and the biggest lighting effect was the sun going down,” she said.

“It would behoove us now,” Devlin adds, “to take some time while we can’t use the buildings to redirect some of our energy back toward that connection between the theater and the environment, theater and nature, theater and the sky.” After all, a recent study in Japan concluded that one is up to 20 times more likely to contract Covid-19 indoors than outdoors.

In his seminal treatise “De Architectura,” presumed to have been written between 30 and 15 B.C., the Roman architect Vitruvius was concerned with such connections, stressing the importance of constructing theaters in healthful environs, from the degree of “salubrious air” circulating within them to their orientation toward the sun. The fall of the Roman Empire in A.D. 476 led to a significant downturn in drama and the spaces that contained it; for centuries, most performances were medieval liturgical plays that took place in churches, on chariots or in platforms in the street.

But, as the University of Maryland professor of theater history Frank Hildy, 67, suggests, by the time secular theater re-emerged in the 16th century with the English Renaissance, it was Vitruvius’s printed work, published in 1486, that provided a kind of blueprint for a boom in new purpose-built playhouses across Europe, even as some of the qualities to which he’d attributed the splendor of Roman architecture were lost in translation without the benefit of illustrated blueprints. In Vitruvius’s description of the spread-out tripartite structure of the Roman theater — spread outward, rather than upward — Elizabethans interpreted the three-part, vertically stacked galleries that characterize spaces like Shakespeare’s Globe, the circular, open-air structure which was uniquely generative of the specific atmosphere on which live theater thrives. Accordingly, it was preceded by the first of these open-air playhouses: The Theater, designed by James Burbage in 1576, which led to a boom in like-minded architecture throughout England, from the Swan to the Globe, the Hope to the Second Globe.

When plagues struck Europe, though, their theaters did not devise safe, sanitary ways to retain the theatrical experience, but rather accepted that playhouses had to close. During an outbreak of the bubonic plague in the early 17th century, performances in London were canceled when the death toll exceeded 30 people per week. And in his 2009 book on the bard, “William Shakespeare,” William Baker writes that from 1603 to 1613 theater closures amounted to 78 total months on account of plague and infection.

“You don’t see a significant change in the design of the buildings following that, because nobody understood what kind of change would be helpful. The audience itself needs to generate energy as different components play against and feed off each other,” says Hildy. “To accommodate the idea that you should keep people farther apart during a pandemic, which is what we’re trying to do today, doesn’t really work, because there are some fundamental principles involved.” Chief among those principles, he says, is that theater thrives when audiences and performers are as close to one another as possible.

Where strides have been made in the healthfulness of theaters, then, they have concerned things like sanitation, ventilation and fire prevention. The sanitary engineer William Paul Gerhard, writing in 1899 in Popular Science Monthly, called for improvements in sewage, drainage, carpeting and dressing rooms, invoking as a “prolific source of danger” tubercular pathogenic germs being discharged and “inhaled by playgoers,” even as the article fails to mention the imperative of maintaining distance.

As such, a more comprehensive overhaul of the theater architecture — and an embrace of ancient, open-air architectural forms as a source of inspiration — has yet to come, in part because of the financial ramifications of what we might call a socially distant or reduced-capacity theater. Theater revenue streams, especially those of Broadway, rely heavily on ticket sales and tourism, both of which have ground to a halt. But, as Devlin notes, ventures like Sam Mendes’s 1993 production of “Cabaret” at London’s Donmar Warehouse, in which audiences sat in clusters at cabaret tables, or the 2017 lake-stage production of “Carmen” at the Bregenz Festival, which Devlin herself set-designed in concert with the elements, demonstrate theater’s fundamental capacity for elasticity and provocation. 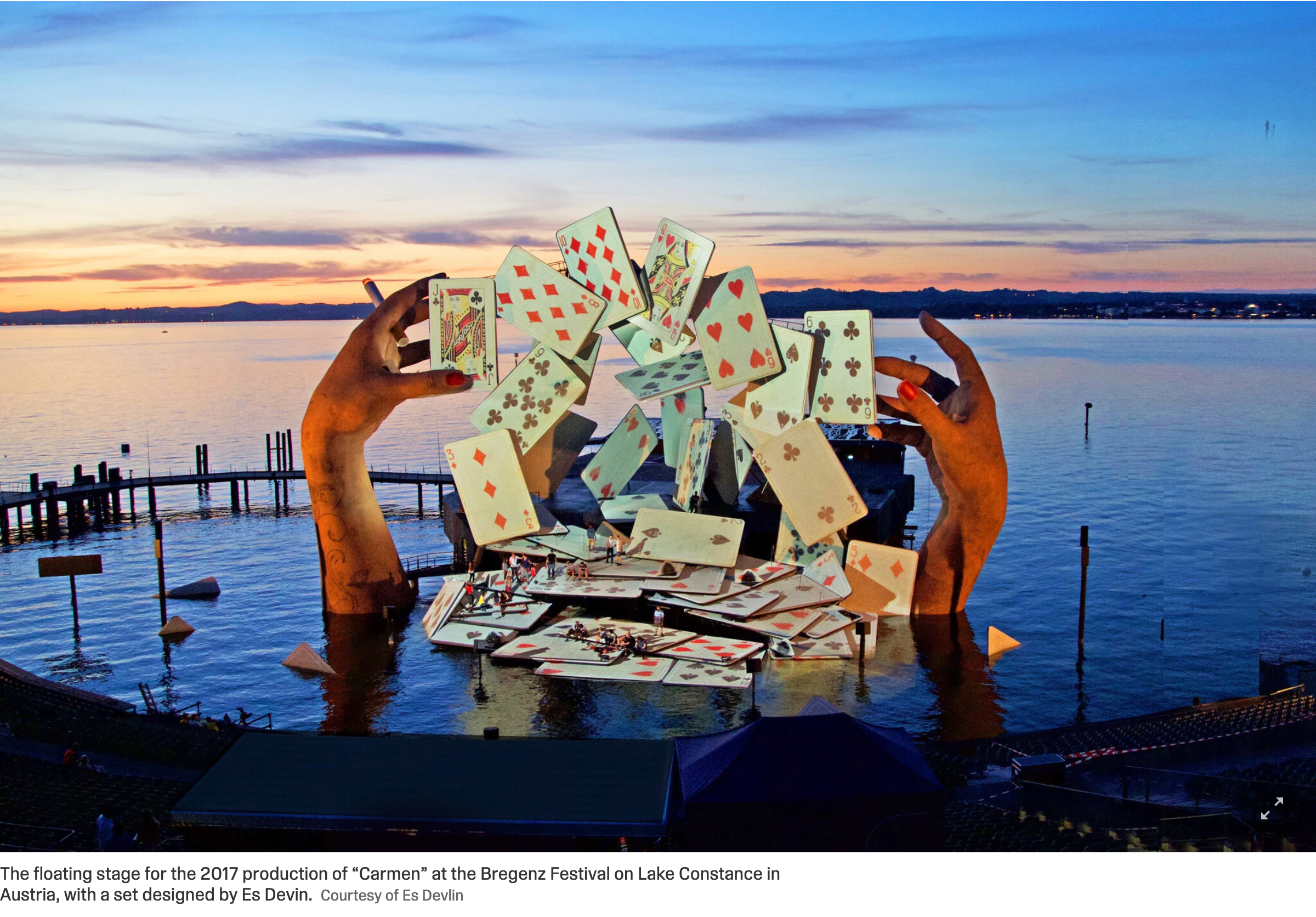 Unlike in some past pandemics, though, we now understand self-isolation as one of, if not the safest means of preventing transmission. This fact puts theater — the art form most dependent on togetherness and proximity — in a potentially intractable bind, at least in the absence of a real reimagining of theater architecture. Outdoor venues, sophisticated ventilation, advanced filtration, no-touch screens, pre-ordered refreshments and radiant heating all provide vital areas for improvement. But live theater remains a scene of mass communion. For this reason, the architect Steve Tompkins, 60, who last year was named the most influential person in British theater by The Stage in its annual list, believes theater must weather this period of arrested development, just as our forerunners did.

“I think there will be other forms: immersive theater with less dense audiences, going back to the medieval model of theater on the move, where actors and audiences are mobile rather than static. Outdoor festivals and open-air theaters and semi-covered spaces will find a resurgence,” Tompkins says. But despite what can be seen as an occasion for improvisation and a kind of time-travel, Tompkins adds, “for myself, socially distant theater is perhaps a contradiction in terms, so I think we will need to ride this out.”

In the meantime, however, the show hobbles on, as it did this summer in the courtyard outside the Theater am Schiffbauerdamm, where the Berliner Ensemble put on free shows for groups of 50 people through the month of June as part of its temporary open-air program. The ensemble formally reopened for its fall season on Sept. 4 and is seen as a litmus test for the theater of the foreseeable future, one performed to small audiences, with unusually large gaps between clusters of people and long overdue sanitary precautions. But it may well be that the past, one of drama performed in the open air, in the kinds of healthful environs Vitruvius envisioned, better exemplifies the way forward.