A ‘murder bag’ or ‘detectives box’ is a kit used by crime scene investigators that contains protective gear and tools to recover evidence. The first steps in the creation of the ‘murder bag’ were made by 19th century medicolegal pioneers who wrote a forensics manual for physicians and demonstrated the usefulness of tools like swabs for evidence collection. But it was not until after a particularly gory murder scene in 1924, that a CSI kit did not become an integral part of investigative protocol. 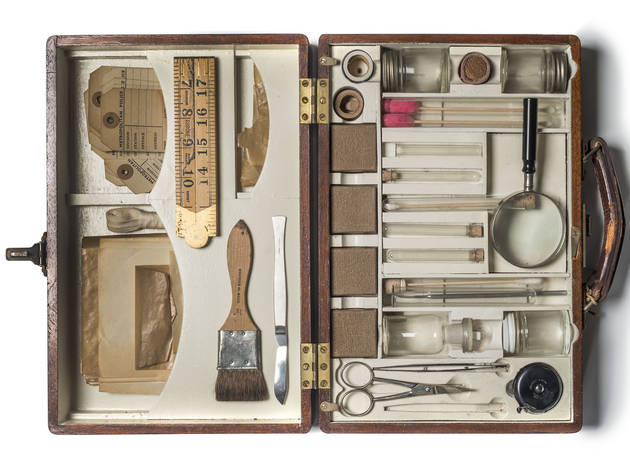 Sarah Mason, from the Wellcome Collection, describes how the idea of the crime scene kit was shaped by Alexandre Lacassagne and Edmund Locard. Alexandre Lacassagne, the Chair of Legal Medicine at the University of Lyon and nicknamed the French Sherlock Holmes, wrote a manual for physicians called to crime scenes titled “Vade-mecum du médecin-expert” (Handbook for the medical expert, 1892). In 1912, French criminologist Edmund Locard demonstrated the usefulness of swabs, a critical part of any crime scene kit today, when he removed evidence from underneath a homicide suspect’s fingernails that proved he was the killer.

Despite these early observations, the ‘detective’s box’ did not become a part of crime scene investigation until famous British pathologist Bernard Spilsbury witnessed police handling decomposing human remains without gloves.

In 1923, 37-year-old Emily Beilby Kaye met Patrick Mahon when he became a client of the London accounting firm where she worked as a typist. Patrick had been in and out of prison for forgery, burglary, and assault. Despite the fact that he was married with children, Patrick started a relationship with Emily.

The couple moved into a beach bungalow in The Crumbles, near Eastbourne, UK, in April of 1924. But their neighbors stopped seeing Emily shortly after, around mid-April.

In the two weeks after Emily went missing, Patrick burned both of the house’s fire places around the clock and made frequent trips to the train station.

He even started to see another woman, named Ethel Duncan, who he invited back to the bungalow for a visit. Ethel told police that Mahon locked up a back bedroom during her visit, but she observed a brown trunk next to a bed before he closed the door. He said the trunk contained valuable books that belonged to a friend and he wanted to lock the door make sure they were safe.

Depending on the reports, the bag was stumbled upon either when Patrick’s wife pulled a claim ticket from his laundry and asked a friend to retrieve it, or when an attendant opened the luggage because it was at the station too long. Either way, constables found blood stained women’s clothing, a knife, and tennis racket monogrammed with E.B.K when it was opened. Mahon was arrested right-away.

Grisly Birth of the Murder Bag

When investigators searched the bungalow on May 2, 1924, they discovered a horror show. The dismembered, disemboweled, and cremated remains of Emily Kaye were hidden throughout the little house. Police found some of Emily’s body parts and internal organs in the brown trunk in the back bedroom, in a hat box, in a biscuit tin, and two-gallon saucepan. Human ash and bone were also in the fire place grates in the front and back sitting rooms.

Pathologist Bernard Spilsbury, best known for his work on the Harvey Crippen and “Brides in the Bath” murder cases, was called to the scene to help with the recovery.

When he arrived, according to Mason, Spilsbury witnessed constables pick up body parts with their bare hands. When he asked one constable why he did not wear gloves, he reportedly said that they never wore them.

Spilsbury called a meeting with the detective superintendent of the Metropolitan Police’s homicide unit. Soon afterward, a policy was instituted that constables and detectives must carry a ‘murder bag’ when they respond to a crime scene. The specialized bag contained protective gear and tools to handle and retrieve evidence such as rubber gloves, tweezers, forceps, a magnifying glass, compass, ruler, and cotton swabs.

The Trial and Testimony

Mahon admitted to killing Emily but said that it the result of an accident caused by a fight she started. Rather than reporting the “accident”, he claimed he panicked and dismembered her body.

In his statement to police, Patrick described in gory detail how he slowly tried to get rid of Emily’s corpse over the next couple of weeks.

“I boiled some of the body in a pot. I burned the head in an ordinary fire. It was finished in three hours. The next day I broke the skull and put the pieces in the dustbin. The thigh bone I burned. It is surprising what a room fire will burn. There was one in the back sitting-room and one in the front sitting-room. You will find some bones there. Her clothes are still there. I used the silk and cloth to wrap pieces of the body in. The night was arrested I was returning to the bungalow to get some more. The blood stains in the trunk will be from pieces of body I put in there till I could carry them away.”

Considering Patrick’s violent past and grisly nature of the scene, police did not believe he killed her by accident. During the trial, it was revealed that his motive for the murder was Emily’s pregnancy and the impending trip she planned to take with him to North Africa. 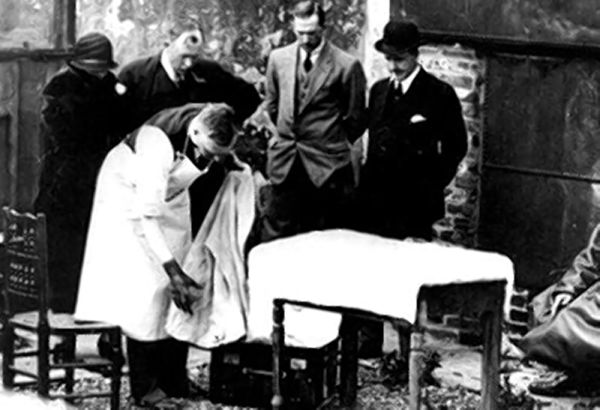 Spilsbury gave the following testimony at Mahon’s trial about the reconstruction of Emily’s body and his finding of her cause of death.

“The ashes recovered from the grates revealed bone fragments to a total of between 900 and 1000 pieces. Some were very small. I fitted the larger pieces accurately together and identified them as human bones corresponding to the bones of both arms and the right leg. These bones and the remains found in the trunk and hat box all correspond to parts of a single human body. I am of the opinion that this woman died as a result of violence inflicted to the head or neck, or both.”

Patrick Mahon was found guilty of murdering Emily Kaye and was sentenced to hang on 3 September 1924 at the gallows at Wadsworth Prison.

Since the 1924 Crumbles Murder, the murder bag has become a vital part of crime scene investigation and its contents have evolved with advances in forensic science. According to the National Institutes of Justice, a crime scene investigation kit shoul include a digital camera, photography scales, notebooks, a latent fingerprint kit, bodily fluid collection kit, evidence bags and seals, footprint casting materials, flashlights, personal protection equipment (i.e. goggles, gloves), and syringes.

Why Do We Roll Our Eyes? By Ashley Hamer Ah, the eye roll: the first line of defense for…