The Psychology of the Joker from ‘The Dark Knight’ (2008)

The Joker is a villain that both fascinates and terrifies us. His origin has remained relatively mysterious, sparking questions about how a “psycho killer” is created. Using real methods and theory, clinical expert Dr. Andrea Letamendi examines several iconic portrayals of the Clown Prince of Crime. Given the raised concerns causing tension to surround the new film, Joker (2019), considerations are given to the science behind behavioral threat assessment, case study, and occurrences of real events in an effort to responsibly inform the discourse.

The author wishes to note to readers that this collection of psychological profiles includes some references and descriptions of both real and fictional portrayals of mass violence, intimate partner abuse, and suicide. Just like the Joker, these conceptualizations are fictional and are not meant to diagnose any real person. This series is not intended as a substitute for the medical or mental health advice of psychiatrists or other clinical professionals. 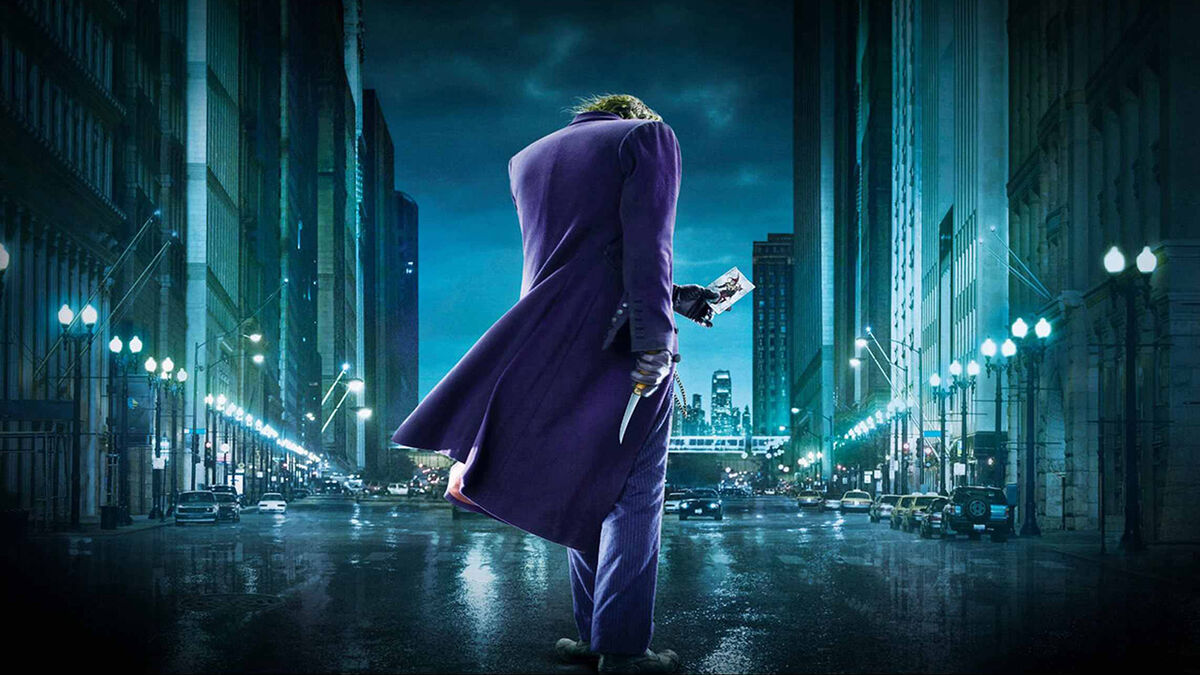 In The Dark Knight (2008), Heath Ledger’s Joker embodies and intensifies the villain’s philosophies of anarchy. Like other portrayals of the Joker, Ledger’s is homicidal, hostile, and unhinged. This Joker, however, is hyper-focused on the destruction of a civil society. He is driven by the symbology of disorder, the ideology of chaos; not so much the process or the exactness of getting there. Whereas Jack Nicholson’s Joker from Batman (1989) sought to disrupt and reinvent authority, Ledger’s Joker pursues a complete dismantling of the establishment. Mark Hamill’s Batman: The Animated Series’ Joker comingled violence with pleasure, but Ledger’s disengages with emotion in favor of intellectualism. He is a moral philosopher, a provocateur, and an empiricist. In fact, he is motivated to prove that the elimination of the state will result in a freer, fairer society. This non-recognition of order makes Ledger’s portrayal more frightening than other Joker characterizations.

Nolan imagined a Joker that would be ominously threatening in a post-9/11 sociopolitical landscape. A terrorist. An enemy who appears to have no rules can be especially frightening because they are unpredictable, unable to be reasoned with, and unable to be understood. Nicholson’s and Hamill’s Jokers both wanted something. Notoriety. Hierarchy. Power. Intimacy. Excitement. Ledger’s Joker seeks bleakness. Though he refers to himself as an “agent of chaos,” it doesn’t matter to him how he functions in the mayhem, as long as the “unjust” hierarchies in the system are dissolved.

“DO YOU KNOW HOW I GOT THESE SCARS?” 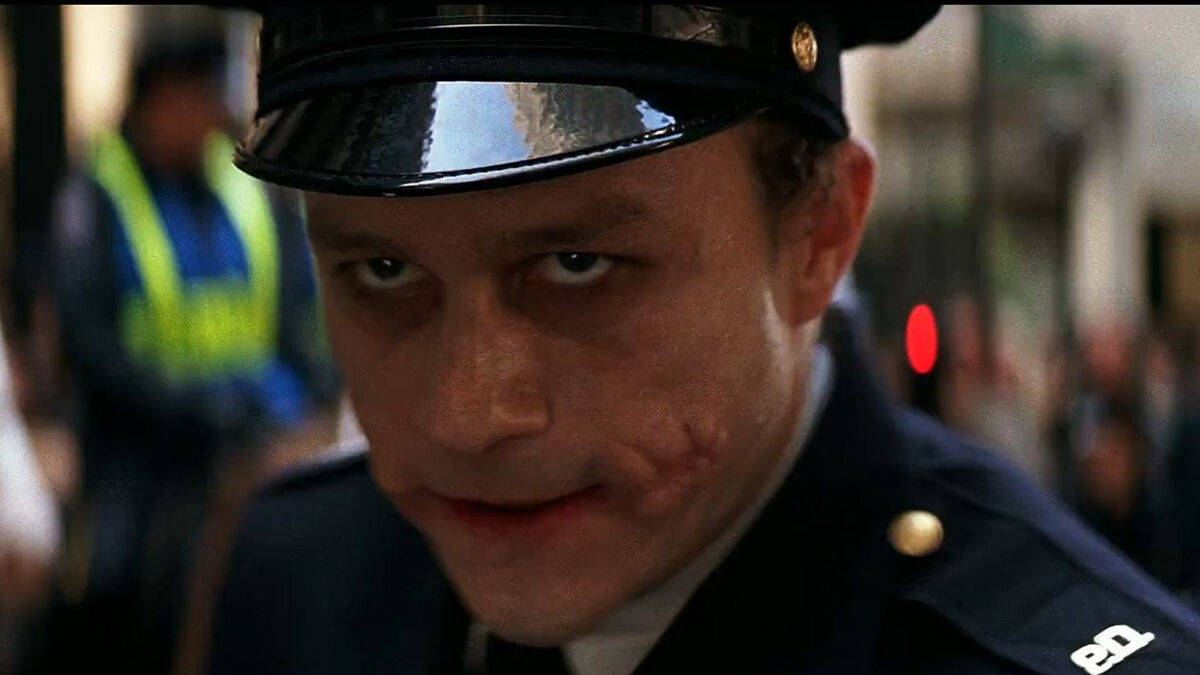 In his most intense moments with his adversaries, the Joker narrates a “story” about his facial scars. Each time he tells it, the story is different – in one version, the disfigurement is a result of severe child abuse. In another, the scars are self-inflicted. He manifests a variety of histories as a tool; a mechanism to instill terror in those he targets. He knows he must create a horrific, trauma-filled narrative to instill fear—it helps him to remain unpredictable and antagonistic. In doing so, his self-reports become unreliable, and it becomes difficult for authorities (law enforcement, psychologists, criminologists), to accurately “profile” him. But this self-description also helps him affix to his radical beliefs about the social order. If he is everyone, he is no one. This is a true departure from previous Jokers who craved uniqueness and made grand gestures to be seen as important, exceptional, special. 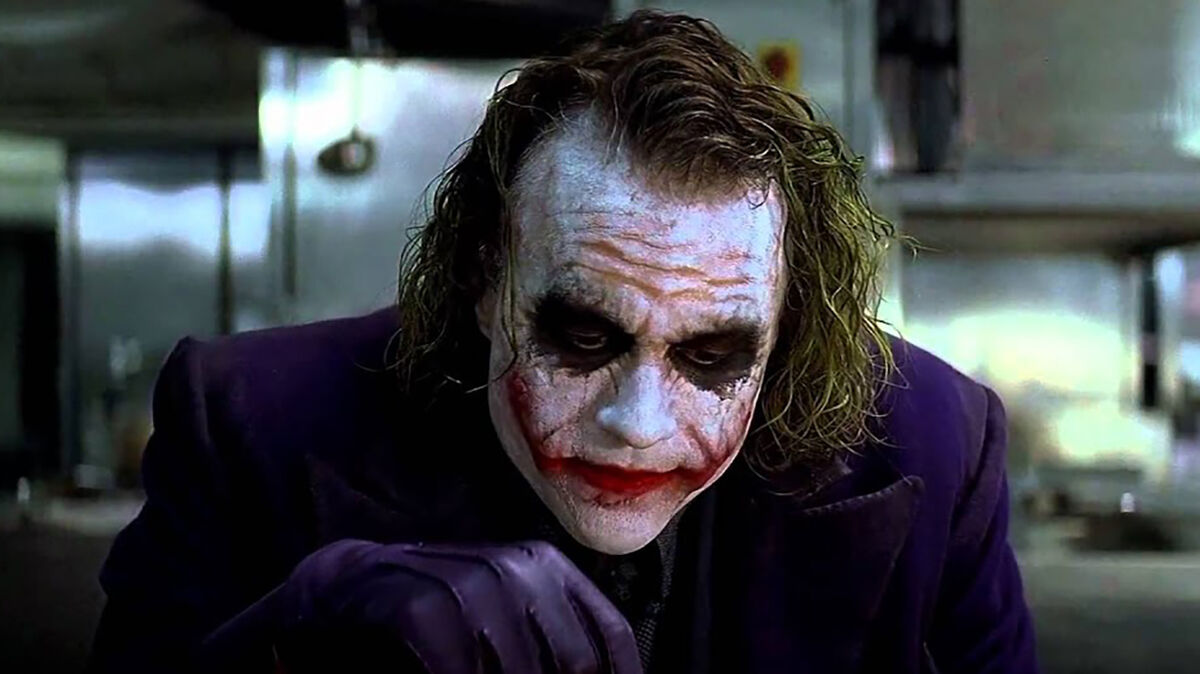 In parallel to the film’s theme of chaos, TDK’s Joker is visually disorganized and unsettling. His purple suit is dull and dusty. His makeup is sloppy and smeared. His visible facial scars are covered with jaggedly drawn lipstick in the shape of a crooked smile. His mutterings and lip-smacking behaviors give off cues of confusion and lunacy. But he is not incoherent or disjointed. In fact, despite the Joker’s disheveled and “mad” appearance, he is lucid, attentive and composed. He is an extremist, but describes his philosophies with clarity and rationality.

The robbery sequence at the Gotham National Bank gives us a sense of the Joker’s surprisingly planful and calm demeaner amidst a succession of high-risk, hazardous interactions. He may even be under-activated emotionally.

Recall the scene in which the Joker exits Gotham General Hospital, detonating an assemblage of bombs. He awkwardly shuffles away, his back to the buildings, as the destruction culminates. In fact, he momentarily turns his gaze toward the fires to ensure the last giant blast ignites, but when the final blow bursts, he reflexively turns away from the destruction again as he steadily heads toward his escape. Satisfied with his message, he moves on. The Joker isn’t actually interestedin watching the world burn. Nicholson’s Joker would have staged a show to collect the honor; Hamill’s would addictively hop on the nearest roller-coaster to ramp up his euphoria. Yes, he is frightful, but Ledger’s Joker isn’t an impulsive, senseless maniac with an impaired sense of reality.

As Malcolm Gladwell asserted, “Arousal leaves us mind-blind.” Arousal can drive behavior in many different ways. For instance, when we are over-stimulated with fear, we react with fight, flight, or freeze behaviors. At times, our high arousal states prevent us from using our “higher level” functions like problem-solving, decision-making and reasoning. But what happens when we are under-stimulated? 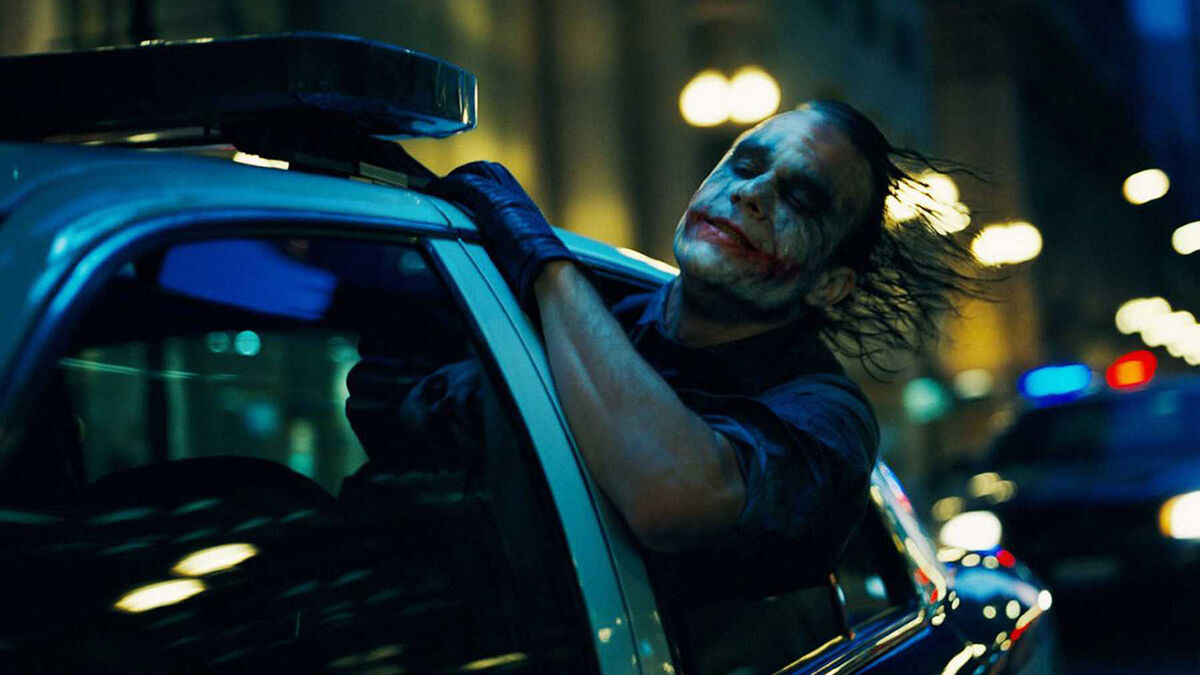 “Low arousal theory” is a psychological concept that explains how some individuals deal with their states of abnormally low arousal. Persons with attention-deficit hyperactivity disorder (ADHD), for example, are said to have lower-than-typical arousal states –their inability or difficulty to sustain attention on any single task may be indicative of a search for more stimulating environments. Their brain is simply looking for something more interesting to attend to! More extreme versions of this phenomenon are problematic because persons with low arousal states seek self-stimulation through excessiveactivity. So, people with relatively low levels of emotional arousal may be more likely to engage in behaviors like aggression and even violence in order to raise their levels to a “normal” state. (This could possibly explain why those with low arousal states often lack empathy and emotional reactivity to other people who suffer).

Ledger’s Joker is likely under-stimulated, leading to both the interest in causing mayhem (attention-sustaining) as well as the capacity to follow through with violence (low reactivity to suffering).

One scene in TDK is particularly telling: After breaking out of his interrogation cell, the Joker steals a cop car to make his way across town. All around him are signs of mayhem and disaster, but his affect is tranquil. He is not rageful, explosive, or hysterical. With the sirens blaring, and the car swerving, Joker holds his head outside the window to feel the rushed air against his face. His response is satisfaction, perhaps even happiness.

THE BATMAN AS A TEST 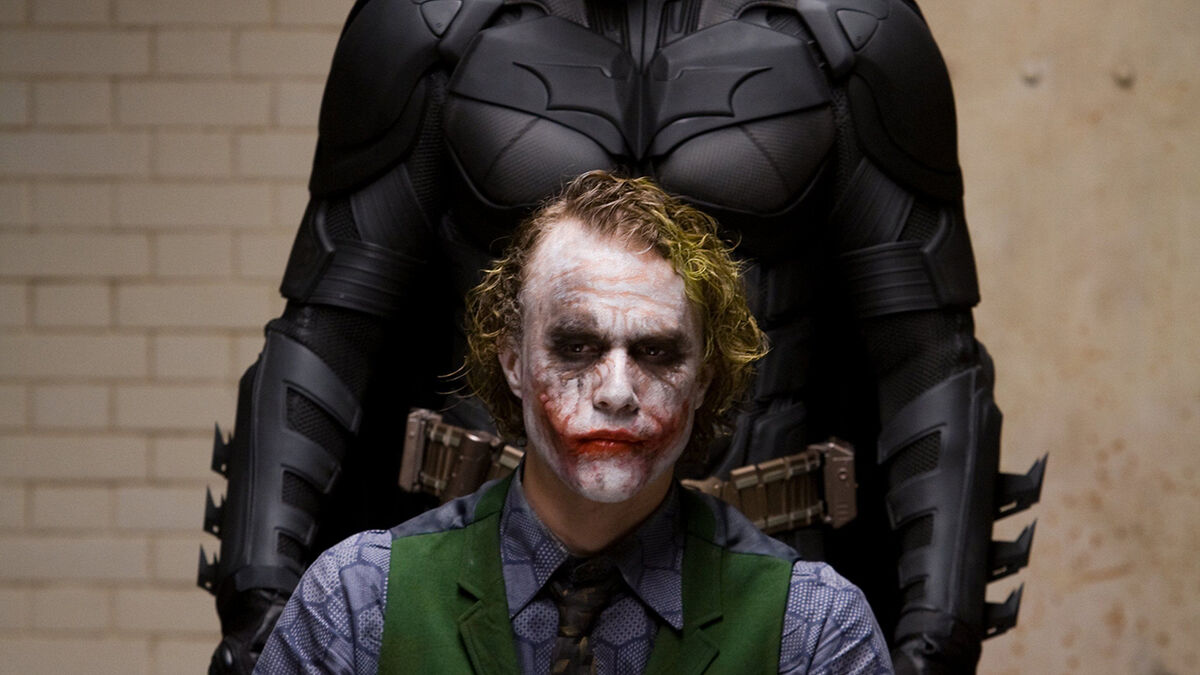 As an empiricist, TDK’s Joker attempts to “test” his theory that people are fundamentally and similarly moral-less, and that the constructed hierarchies of society only serve to oppress the underserved and hide the natural tendencies of this human immorality. He wants to prove that moral codes are superficial layers of conformity, and that people only “do good” to reap the benefits of the social establishment. He doesn’t believe in altruism. While being interrogated in the Gotham Police Department, the Joker candidly reveals his perspectives on the social order. “The only sensible way to live in this world is without rules,” the Joker asserts to Batman. “You’ll see…I’ll show you. When the chips are down, these civilized people, they’ll eat each other.” Again, though his appearance is jarring and his behavior extreme, Ledger’s Joker isn’t completely disconnected from reality. He has the capacity for moral reasoning, which is the social-cognitive process by which a person judges their own and the actions of others as “bad” or “good.” The Joker does not have difficulty understanding and predicting the behavior and beliefs of others – he simply believes they’re faulty.

Not only does he know right from wrong, he specifically engages in the wrong to prove his point.

What’s truly frightening is his endgame – the Joker wants to prove that humanity is inherently sick. He’s motivated to prove that “madness is like gravity…all it takes is a little push.” The interrogation scene reveals Joker’s high emotional intelligence. He understands Batman’s vulnerability. At times, he is able to get under Batman’s skin. He admits that he does not want to kill Batman because he needs him as part of his social experiments. In fact, the Joker wants to harness Batman’s rage and anger, his capacity for force, intimidation, and violence – and ultimately guide him toward anarchistic endpoints. 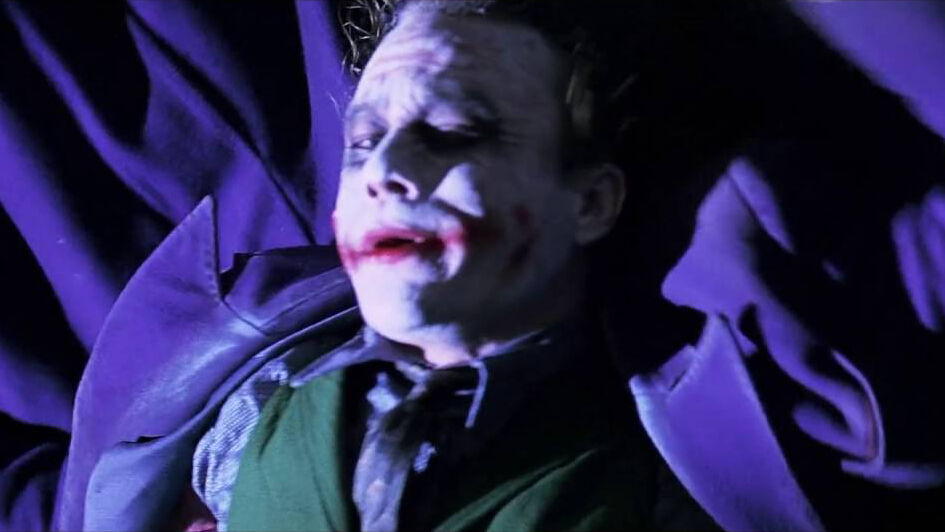 At the end of the film, Joker admits that Batman is “incorruptible,” but gleefully explains he proved his ideology through the abasement of Harvey Dent. Dent, a morally sound person, was the most admired, most hopeful and effectual figure in Gotham City, and perhaps the most reflective of a hierarchical order that might have the potential to be harmonious. Due to a few tragic and traumatic forces triggered by the Joker, Dent was driven to madness, and Two-Face was born. Joker was able to prove that by simply leveraging the evils of society, he could create monsters.