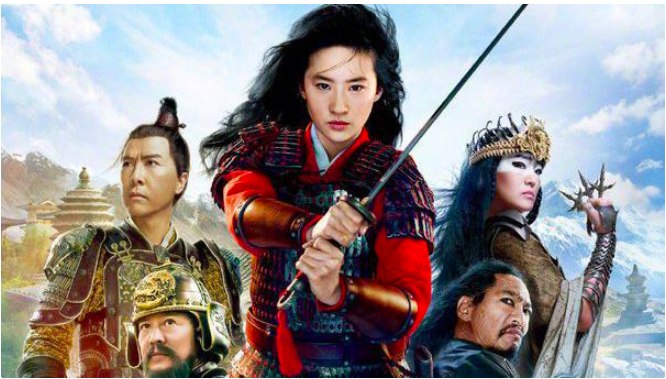 More so than most big-budget blockbusters, it really does lose something without the big screen. The movie is often flat, especially in terms of character interaction, leaving the action, locations and spectacle as the primary entertainment. The core hook of the movie is that it is a loose remake of not just the “Mulan” legend but the 1998 animated feature, and that it’s Disney spending $200 million to offer a sprawling, big-scale action epic. However, it lacks the spitfire energy and courage of its title hero, and the visual imagination of recent blockbusters domestic and foreign. It is so concerned with being respectful to the theoretical Chinese audiences that it comes off as patronizing and often bloodless.

Considering that the original toon is a human-centric action drama, one with a fiery young woman taking up arms to protect her family and her country, the notion of a live-action remake made sense when it was first announced back in 2015. The “original” Mulan toon packs a remarkable amount of incident, story, character and emotions into a standard 75 minute running time. Like, for example, The Lion King, Beauty and the Beast and Aladdin , things aren’t just allowed to happen in this 115-minute remake, but instead characters stop the movie dead in its tracks to spell out what’s happening and why. That the film works is mostly a testament to the primal source material.

Guess you already know the basic plot, one which involves Mulan (Liu Yifei) stealthily taking her father’s place in a military draft and pretending to be a man as the new recruits prepare to ward off bloodthirsty invaders. This is a straightforward retelling, with little in the way of fantasy or magic. Even the witch Xian Lang (Gong Li) doesn’t use her powers for much beyond shape-shifting and murder. This is a PG-13 war movie with onscreen combat and battlefield death.

The ingredients are there for a top-flight action epic, including some shrewd casting. Jason Scott Lee relishes the chance to play a baddie, and it’s always fun watching Donnie Yen do his thing. But everyone, save for maybe Lee, is buttoned-down and muted, as if Disney was afraid that any spontaneity or explicit passion would offend Chinese moviegoers (or Asian American moviegoers). But China embraced the aggressively weird/pulpy likes of Aquaman and Venom, while turning The Mermaid, Monster Hunter and the animated Ne Zha into mega-hits. Heck, at least some of the appeal of Michael Bay’s Transformers movies lay in how comparatively goofy and over-the-top weird they were compared to other blockbuster franchises at the time. Liu Yifei never gets to cut loose, and the movie never really does either. The action, well-staged and competent, never goes “full Zhang Yimou” and thus can’t compare with the genuine article.

For much of its running time, Mulan seems determined to earn plaudits for what’s not in it as opposed to what is. Yes, it’s a big-budget period-piece action movie with a “strong female lead” that happens to involve an all-Asian cast. It’s also excessively respectful, including its share of frankly condescending platitudes, going out of its way to avoid “problematic” content. I’m generally a huge Niki Caro fan, and this movie certainly shows she can make a well-staged and excessively competent mega-budget movie. However, maybe an Asian director would have been more willing to take their foot off the brakes without worrying about causing offense to Asian demographics. It gets the job done, but sans any flourish.

In terms of a binary “yes/no” grade, Mulan is worth seeing and is mostly entertaining in a surface-level fashion. But there is a splashier, more passionate and more challenging picture trapped beneath the veneer of respectability, to the point where it lacks even the energy and emotion of the 1998 toon. You won’t miss the songs or the talking dragon, but you will miss the clockwork plotting and watching Mulan go from novice to warrior, since this movie essentially begins with its hero already able to kick ass. The moments of narrative invention and dramatic stakes from the toon are sanded down and drawn out here, again presumably out of fear of causing offense. But in the end Mulan is more concerned with being “good” than with being “good.” I’m not saying the movie needed more flying monsters, bloodier violence or rainbow-colored costumes, but it surely wouldn’t have hurt.

By Christian Jarrett Address the real reasons you procrastinate and you’re more likely to start achieving your goals.…

By Assad Abderemane Will more people start walking with their therapists? Photo: eyecrave/Getty Images If you’ve ever…