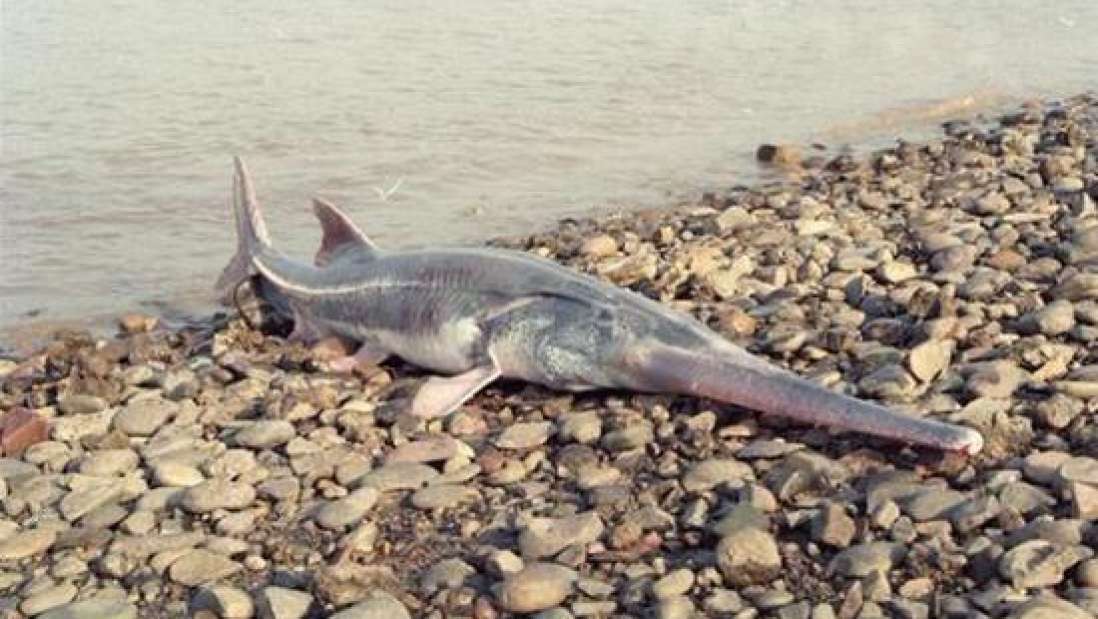 Experts in China have declared the extinction of the giant Chinese paddlefish, one of the world’s largest freshwater fish. Once a resident of the Yangtze River, it hasn’t been seen since 2003, and it’s thought it died out sometime between 2005 and 2010.

The Yangtze River is the longest river in Asia, and the third-longest in the world. However, due to various stressors – dams, overfishing, river ports, and pollution – the paddlefish is the third Yangzte-dwelling species to go extinct in recent years, following the Yangtze River dolphin, or baiji, in 2006, and the Chinese shad in 2015.

“The mega river ecosystem of the Yangtze River was once home to diverse aquatic megafauna but is increasingly affected by various anthropogenic stressors that have resulted in continuous loss of biodiversity,” the authors of the study confirming the extinction, published in Science of the Total Environment, wrote.

The Chinese paddlefish (Psephurus gladius) was one of two extant members of a lineage that goes back 75 million years. Due to various aspects of the unusual fish, the Chinese have many nicknames for it. Thanks to its size – 3.6 meters (11.8 feet) long and weighing 250 kilograms (551 pounds), though unsubstantiated claims from the 1950s describe one as large as 7 meters (22 feet) – it’s called the “king of freshwater fish”. Due to its long protruding snout, it is also called the Chinese swordfish.

It was first declared “critically endangered” by the IUCN in 1996, and its increasing rarity helped give it the name the “panda of the Yangtze River”.

The paper noted it had been thought “functionally extinct” – not enough breeding pairs to survive – since 1993, and was last seen alive in 2003. IUCN experts have said there is no image evidence of the species since 2009.

“We respect the evaluation model and experts from the IUCN,” said co-author Wei Qiwei from the Chinese Academy of Fishery Sciences, reports the South China Morning Post, “although we accept this result with a heavy heart.”

It is another blow for the struggling 6,300-kilometer (3,915-mile) river ecosystem. It houses over 4,000 aquatic species, but with the increase in river pollution, traffic, and overfishing many other species already listed as critically endangered, like the finless porpoise and Chinese sturgeon, are in danger of disappearing.

In response to this loss, Beijing has announced a 10-year commercial fishing ban (the first ever) on the Yangtze starting this month, and coming into full effect early next year. However, researchers argue it is the two dams built on the Yangtze that were the nails in the coffin of the already rapidly declining fish populations.

Giant paddlefish are migratory fish, which means they need to swim upstream to breed and lay eggs, something the Three Gorges Dam, in particular, has scuppered. After the dam was erected in 2003, fishers noticed the fish trying to find new hatching grounds downriver, and a drastic drop in numbers of the once-common "king". Not long after that, fishing ceased in the area.

The Chinse government hopes that the ban will allow the dwindling fish stocks and declining biodiversity of the river to replenish, and has offered to retrain fishers in the meantime.

“The fishing ban is a key measure to effectively curb the decline of the river’s ecosystem and any further drop in biodiversity,” Yu Zhenkang, vice-minister of agriculture and rural affairs, said in the announcement.

What Do Blind People See? By Anne Marie Helmenstine, Ph.D. alle12 / Getty Images It's common for a sighted…