Archaeologists on a dig in Ecuador recently uncovered an ancient burial ritual in which infants were laid to rest while wearing helmets made from the skulls of other dead children. Even the most hardcore Scandinavian metal bands wouldn't put something like that on their album covers. Scientists, on the other hand, don't give a damn about the gnarliness of their discoveries. Their gruesome finds go directly from the dig site into a scholarly paper with a boring name like "Unique Infant Mortuary Ritual at Salango, Ecuador, 100 BC," instead of something more fitting, like "Death Baby: Skull Inception." 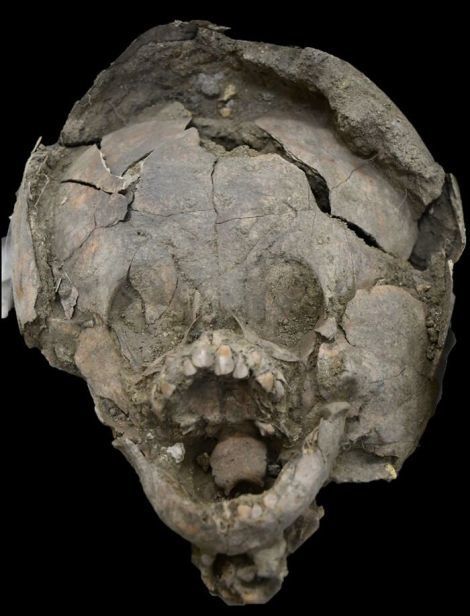 Between 2014 and 2016, they found a total of 11 infants who had been buried with "mortuary headgear" -- which is the blandest possible way to describe a dead child wearing the skull of another dead child like a football helmet. Researchers don't know why this ancient Ecuadorian tribe would do something so goddamn metal, but they have their theories: the Guangala people thought infants had wild souls, so perhaps they thought adorning infants with other skulls protected them after death. But of course, that means these kids showed up to the afterlife wearing the heads of other kids who were already there. Awkward!

Probably the worst part of this already horrible story is this sentence: "cranial vaults were still fleshed when placed on the infants." Still fleshed. Sorry, but you're going to be haunted by those words for the rest of your life. Still fleshed. Still Fleshed. STILL FLESHED.

Top 10 most popular GIFs of 2019, according to Giphy BY ANDY MOSER GIFs are an internet language of…