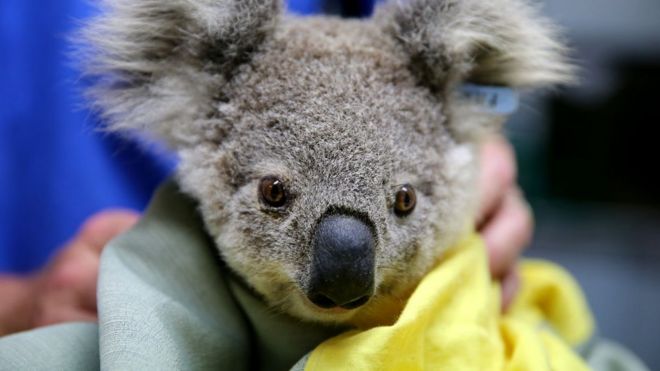 Koalas will be extinct in the Australian state of New South Wales (NSW) by 2050 unless there is urgent action, an inquiry has found.

The once-thriving marsupial has been ravaged by habitat loss, disease and climatic events in recent years.

About 5,000 koalas are thought to have died in devastating recent bushfires, the report to state parliament said.

It urged lawmakers to ensure that remaining populations did not perish in rapidly diminishing habitats.

The inquiry, by a cross-party committee, found pre-bushfire estimates that koalas numbered 36,000 in NSW were now outdated.

In the past year, blazes which scorched more than five million hectares statewide had affected 24% of koala habitats, it said.

The logging and fracturing of other koala areas has also been detrimental to their survival, according to the year-long investigation.

The committee said climate change posed an ongoing threat by exacerbating bushfires and drought, and by reducing the quality of the animal's eucalyptus leaf diet.

"At every turn we were handed evidence that showed our current laws are inadequate and facilitating the clearing of core koala habitat," said chairwoman Cate Faehrmann.

"The strategies and policies currently in place to protect the koala aren't working."

The committee made 42 recommendations, including establishing new national parks in identified areas and reducing land clearing.

The state government welcomed the report but did not immediately confirm which recommendations it would adopt.

"Koalas are an iconic Australian animal recognised the world over and a national treasure which we will do everything we can to protect for future generations," state Environment Minster Matt Kean.

Koalas are also found in Queensland, South Australia, Victoria and the Australian Capital Territory but their numbers are on the decline nationally, according to conservation groups.

Last year, the Australian Koala Foundation estimated there were "no more than 80,000" left in Australia - though others say it is difficult to know for sure.

Their principal threats - habitat loss, diseases such as chlamydia, and the impacts of climate change - are a concern nationwide.

Why Do Smells Trigger Memories? By Everyday Einstein Sabrina Stierwalt Your sense of smell may be a better memory…

How accurate are our first impressions? By William Park We appraise people in a snapshot – and those judgements are…