What a U.S. Exit from the WHO Means for COVID-19 and Global Health 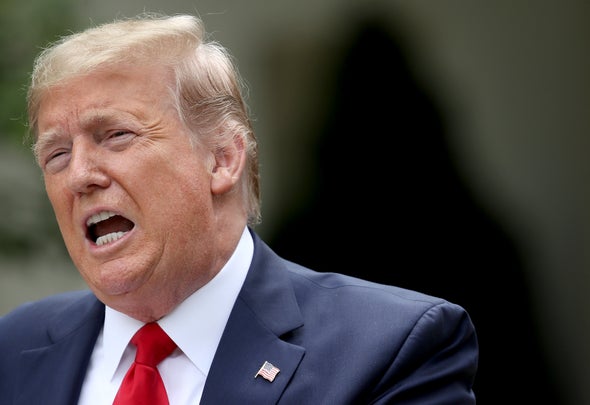 As President Trump terminates the U.S.’s relationship with the agency, experts foresee incoherence, inefficiency and a resurgence of deadly diseases

US President Donald Trump has announced that he is “terminating” the country’s relationship with the World Health Organization (WHO), and that the US will redirect funds intended for the agency to other global health projects.

Because the United States became a member of the WHO through a joint resolution in 1948, Trump may need Congressional approval to exit the agency, says Jennifer Kates, the director of global health & HIV policy at the Kaiser Family Foundation in Washington, D.C. But she adds that previous presidents were able to withdraw from treaties without Congress stepping in. “This is murky legal territory,” she says.

Trump's announcement follows a steady ramping up of blame and accusations hurled at the WHO that culminated last week in a sharply worded letter to the agency's director-general Tedros Adhanom Ghebreyesus. In it, Trump threatened to make permanent the US freeze on WHO funding that began in April, unless the organization “can actually demonstrate independence from China” within 30 days. He also said that he would reconsider the United States' membership in the organization.

Now, experts in health policy are contending with repercussions that could range from a resurgence of polio and malaria, to barriers in the flow of information on COVID-19. Scientific partnerships around the world would also be damaged, and the United States could lose influence over global health initiatives, including those to distribute drugs and vaccines for the new coronavirus as they become available, say researchers. “This will hurt,” says Kelley Lee, a global health-policy researcher at Simon Fraser University in Burnaby, Canada.

Proposals for new US-led initiatives for pandemic preparedness abroad do little to quell researchers’ concerns. Some say these efforts might even add incoherence to the world's response to COVID-19, and global health more generally, if they're not connected to a fully-funded WHO. “It’s surreal to even be having this conversation, since it’s so hard to get one’s head around the massive implications,” says Rebecca Katz, director of the Center for Global Health Science and Security at Georgetown University in Washington DC.

The rift is poorly timed, given the need for international coordination and cooperation to contend with the coronavirus. “In this pandemic, people have said we’re building the plane while flying,” Katz says. “This proposal is like removing the windows while the plane is mid-air.”

Trump’s letter, which he tweeted on 18 May, alleges that the WHO intentionally ignored reports that COVID-19 was spreading between people in Wuhan, China, in December. “I cannot allow American taxpayer dollars to continue to finance an organization that, in its present state, is so clearly not serving America’s interests,” he wrote. A few of Trump’s points were immediately debunked. For example, he claimed that the medical journal The Lancet had published on the new coronavirus in December. The next day, the journal issued a statement calling the claim factually incorrect because their first reports on COVID-19 were published on 24 January. The journal also refuted other allegations in the letter, concluding that the claims are “damaging to efforts to strengthen international collaboration to control this pandemic.”

Tedros has reiterated his commitment to a comprehensive and independent evaluation of the WHO's response to COVID-19, and an assessment of the organization's operations in the first part of 2020 is already public. But when reporters asked Tedros about additional, immediate investigations in response to Trump's allegations at a WHO press briefing, he said, “Right now, the most important thing is fighting the fire, saving lives.”

Trump does not need Congressional approval to withhold funds from the WHO, and global health researchers say the gap left by the US is a big deal. Last year, the US government gave the WHO roughly US$450 million. Nearly 75% of that was voluntary, and the other quarter was mandatory — a sort of membership fee expected from the 194 member countries, adjusted by the size of their economies and populations. The United States is the biggest donor, representing about 15% of the WHO budget. So far this year, it has paid about one-quarter — $34 million — of its membership dues, according to a WHO spokesperson. Voluntary funds are more complicated because a large portion were paid last year, however the spokesperson says that the freeze has put a hold on new agreements, meaning that the full-blown effects of the decision will be felt in 2021.

The US government provides 27% of the WHO’s budget for polio eradication; 19% of its budget for tackling tuberculosis, HIV, malaria and vaccine-preventable diseases such as measles; and 23% of its budget for emergency health operations. If these initiatives shrink, researchers say, death and suffering will surge. David Heymann, an epidemiologist at the London School of Hygiene and Tropical Medicine, says this will also amount to squandered investment for the United States, particularly for polio. Gains won through vaccination campaigns that cost hundreds of millions of dollars would be lost, he says.

Trump says that the US government will continue to fund global health through aid groups and its own agencies, instead of the WHO. In fact, proposed legislation suggests that the US government may be considering alternative ways to fund health overseas. Last Friday, Devex, an online platform focused on global development, reported that the US State Department is circulating a proposal for a $2.5 billion initiative that would oversee national and international pandemic responses, called the President’s Response to Outbreaks (PRO). And late last week, a proposed bill for a 'Global Health Security and Diplomacy Act of 2020' was introduced to the Senate. The bill, obtained by Nature, would authorize $3 billion for an international initiative to contain epidemics at home and abroad, to be overseen by a presidential appointee from the US State Department.

Amanda Glassman, a senior fellow at the Center for Global Development, a think tank based in Washington, DC. says that she and her colleagues welcome a US effort dedicated to fighting pandemics worldwide. "But it has to collaborate with the WHO, and it should come with increased obligations to the WHO," she adds. Those requests aren't assured in the proposed legislation, and if the US rolls out parallel efforts, Glassman and others don't expect them to be very effective because it takes years to build partnerships with countries. Lee agrees. “You can’t just show up in Afghanistan and start vaccinating people.”

Furthermore, the WHO works in several countries where there is little other international presence, adds Glassman. For example, during the ongoing Ebola outbreak in the northeastern Democratic Republic of the Congo, the US government relied largely on the WHO because of ongoing violence that kept away US agencies and most international humanitarian groups. Marcia Poole, a WHO spokesperson, says: “There are certain areas where we are the provider of last resort, and US funding supports these operations.”

Even in countries where the United States has long run programmes to tackle HIV, malaria and other health issues, the WHO still coordinates efforts. Without such organization, Glassman says, “we’d see a lot more incoherence in global health”, which would end up wasting some of the $11 billion that the US spends on global-health programmes each year.

A rift between the WHO and researchers at US agencies could also weaken long-standing collaborations. Scientists from the US Centers for Disease Control and Prevention and National Institutes of Health often rotate through the WHO’s headquarters in Geneva, Switzerland. Around 180 epidemiologists, health-policy specialists and other staff members at the WHO are from the United States, and dozens of other Americans work at the organization as visiting scholars and interns. Most of their jobs aren’t directly tied to US funding, but they could be affected as the relationship between the United States and the WHO is strained, says Lee. There could also be impacts on about 80 official WHO collaborating centres in the United States.

More than the money, researchers worry about the loss of collaboration. “The US relies on multilaterals to work in countries where diplomatic ties are almost non-existent,” says Suerie Moon, a global-health researcher at the Graduate Institute of International and Development Studies in Geneva. That includes China; US scientists were permitted to tour the country in mid-February as part of a WHO mission to learn from its COVID-19 response.

US epidemiologists also rely on information obtained through their WHO colleagues around the world. Glassman points out that this is especially important to US security interests as the pandemic escalates in Latin America. “We need something like the WHO to manage relationships and keep information flowing, whether that’s genomic sequences or standards of care,” she says.

The WHO will survive a US funding freeze over the short term, say researchers, because other donors will help to compensate for the financial gap during the pandemic. For example, Chinese President Xi Jinping pledged $2 billion to the coronavirus response. Still, Trump’s move will sting for both the WHO and the United States, says Lee. And over time, the United States would lose its influence abroad. Even if Trump does not revoke US membership, a failure to contribute voluntary funds means that the country will have less influence on what the agency does. And if the United States pays nothing at all or terminates its relationship with the WHO, it will lose its voting rights. Currently, only three countries — South Sudan, Venezuela and the Central African Republic — are in this category.

With that loss, the United States will relinquish its ability to shape health agendas around the world, says Lee. Ironically, that is exactly what the Trump administration is complaining about. “If the US pulls out and leaves a vacuum, it will be filled by other countries, like China,” she says. “You’ll see a self-fulfilling prophecy.”

Should You Skip Breakfast If You’re Trying to Lose Weight? Breakfast is the most important meal of the…