Donald Trump's immigration ban: who is affected and what will the impact be?

Donald Trump's executive order is likely to set out immigration restrictions which are unprecedented in US history. Here's what we know
By Rozina Sabur 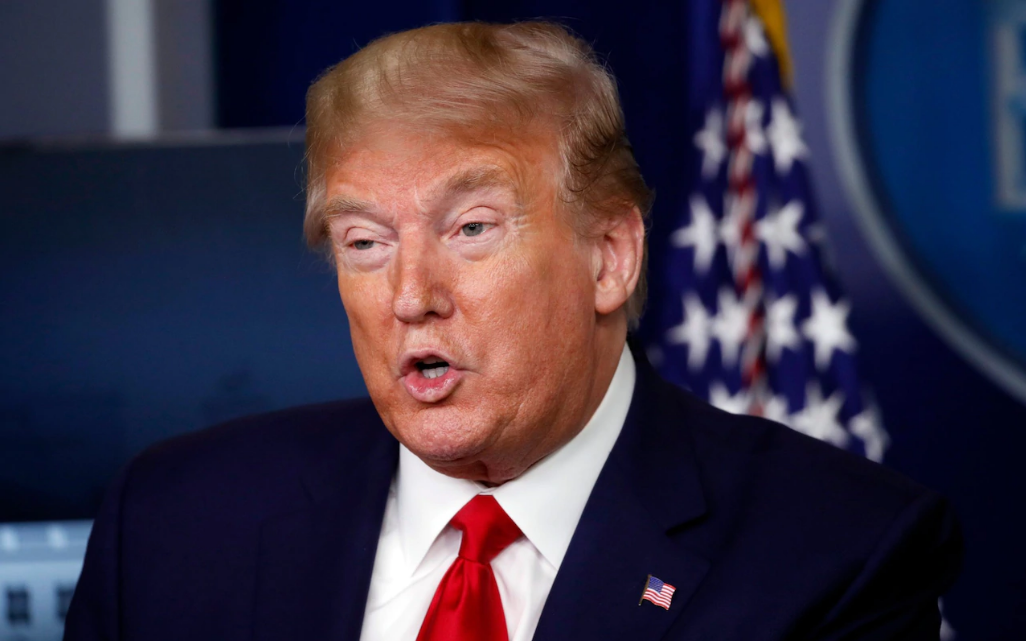 Donald Trump announced that he plans to suspend immigration into the US to protect American jobs and prevent the spread of the "invisible enemy" of the coronavirus pandemic.

"In light of the attack from the Invisible Enemy, as well as the need to protect the jobs of our GREAT American Citizens, I will be signing an Executive Order to temporarily suspend immigration into the United States," the US president said in a tweet.

Mr Trump later clarified at a White House briefing on Tuesday night that the order will apply to foreigners seeking a "green card", which refers to permanent residency status, for a 60-day period.

“By pausing immigration we will help put unemployed Americans first in line for jobs as America reopens. So important,” Mr Trump said. “It would be wrong and unjust for Americans laid off by the virus to be replaced with new immigrant labour flown in from abroad."

Mr Trump, who had staked his upcoming re-election on the strength of the US economy, had been pressing to swiftly end the shutdown, which has left at least 22 million people jobless nationwide, a level of unemployment not seen since the Great Depression of the 1930s.

The president has already used the pandemic to enact a string of changes to the way migrants are processed on the US border with Mexico, and he is expected to tout his strong record on immigration during the presidential campaign.

Here is what we know so far about Mr Trump's new immigration control announcement.

What is Trump doing?

An executive order is being drafted that would suspend nearly all immigration into the US. Mr Trump said he could sign the order as early as Wednesday. He added that the 60-day suspension for green card applications could be extended further depending on the state of the US economy. He also hinted that he was considering further orders on other forms of immigration to the US.

What is the current situation and how will it change?

The full details surrounding the plan, such as the legal basis for Mr Trump's executive order, are still unclear but White House officials have privately suggested the executive order will not make substantial changes to current US policy. Mr Trump has already used the threat of coronavirus to tighten America's borders and underscore the importance of immigration controls.

The US State Department, which is responsible for issuing visas overseas, has already shut down almost all kinds of visa processing because of the coronavirus outbreak. Interviews for visa applications, citizenship ceremonies and the US refugee resettlement programme have all been paused or postponed.

The Trump administration has also curbed both legal and illegal immigration on America's southern border. Early this month the administration announced it had begun immediately turning away migrants and asylum seekers as well as rapidly deporting people who illegally cross the border to their home countries. It is likely Mr Trump will attempt to keep these tighter controls in place for some time.

Are there any exceptions?

Mr Trump said there would be exceptions to his 60-day order but did not spell out what these might be. However he did confirm that farm workers would not be impacted by the change. This means the hundreds of thousands of people who enter the country under seasonal work visas will most likely not be affected under any potential new executive orders. The coronavirus pandemic has put additional strain on the US food supply and migrants make up roughly a tenth of the workforce on the country's farms.

Healthcare workers are also likely to be exempt from the new restrictions. It is also worth noting that the executive order is not likely to affect legal immigrants already in the country or those applying to renew their visas.

While the ban does not affect non-immigrant visas, the Trump administration has already imposed travel restrictions from several countries, including bans on air travel from China and much of Europe. These are likely to remain in place for some time and officials have said they are weighing up the idea of imposing further travel bans even after the US economy reopens.

Just how big a deal is this?

The executive order is not as expansive as Mr Trump's Monday night initially suggested, but it will still affect a significant number of people.

Some 580,000 green cards were issued last year, and many people seeking them have family members in America.

There had been fears people seeking visas to work or study in America temporarily would be impacted by the changes, including Britons, but Mr Trump said they would not be impacted. Exact details of who would be hit and what exemptions will be in place remained unclear last night, with a text of the executive order yet to be published. It was also not clear whether people whose applications for green cards were already in the system would be impacted.

Mr Trump said it was the US government’s “solemn duty” to protect American workers, adding that the initial “pause” would last for 60 days, though it could be extended depending on the economic situation at the time.

Michael Clemens, an immigration expert and economist, said there was some doubt over whether the move would help the US economy. "In fact, economic evidence shows the opposite. In the Great Depression, the United States banned and deported most immigrants from Mexico. Economist Giovanni Peri and co-authors have shown that this act made native unemployment worse in the Depression," he said. "This is because immigrants are the backbone of many industries that massively employ Americans. A few Americans took jobs opened up ... but more Americans lost their jobs when the businesses that depended on immigrants folded."

How have people reacted to the announcement? 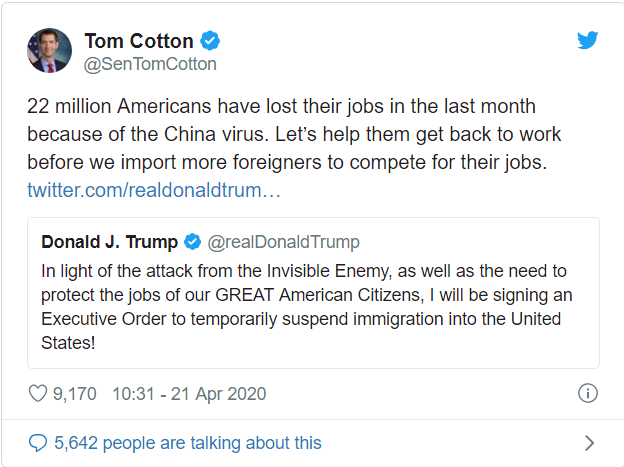 Roy Beck, president of NumbersUSA, a group advocating lower immigration levels, also said Mr Trump's action made sense. "With tens of millions of Americans who want to work full time not able to, most immigration makes no sense today, and to allow it to continue at its current level at this time would show a callous disregard for those enduring deep economic suffering," he said.

However the announcement has been opposed by the president's critics. Joanne Lin, from Amnesty International USA, said: "We are one country and there is no way we could address the spread of COVID-19 without the unending efforts of immigrants providing healthcare and home aid, staffing grocery stores, and producing food, whose work has been deemed essential while they are simultaneously struggle to access to care, support, and services.

"If President Trump want to limit the spread and the deaths occurring under his leadership, now is the time to look to health experts, and not point fingers at immigrants.”

Will there be legal challenges?

Almost certainly. All of Mr Trump's major immigration changes - such as his infamous Muslim travel ban - have been challenged in the courts. However, until we know more about the legal basis for the president's executive order, it is hard to know what form the challenges will take.

According to experts, there are two ways Mr Trump could make the move legally.

Speaking to the Washington Post, Alex Nowrasteh, the director of immigration studies at the libertarian think tank the Cato Institute, said Title 42 of the US Code permits the president to halt immigration for health reasons, while a 2018 Supreme Court decision upholding his travel ban gives him legal precedent.

“The president has been opposed to legal immigration for his entire administration,” he told the newspaper. “This is an opportunity to close it down entirely, and this is about as legitimate as you can get in terms of a broad justification for doing so.”

The only official comment from the White House so far has come from Kayleigh McEnany, Mr Trump's new press secretary. In a statement, Ms McEnany said: "President Trump is committed to protecting the health and economic well-being of American citizens as we face unprecedented times. As President Trump has said, 'Decades of record immigration have produced lower wages and higher unemployment for our citizens, especially for African-American and Latino workers.' At a time when Americans are looking to get back to work, action is necessary."

What will the long term impact be?

If Mr Trump's executive order is in place for some time, it could have long term impacts on the numbers of foreign-born workers trying to relocate to the US. As the New York Times notes, the number of visas issued to foreigners looking to move to the US fell by about 25 percent, to 462,422 in the 2019 fiscal year from 617,752 in 2016.

Speaking to the Washington Post, Greg Siskind, an immigration lawyer, also warned that Mr Trump’s plans could derail efforts to restart the economy by alienating foreign students, who can prove extremely lucrative for America's universities, as well as foreign investors.

The Reason Anxious People Often Have Allergies There might be a hidden link between seasonal sniffles and mood disorders.…