There might be a hidden link between seasonal sniffles and mood disorders.
BY OLGA KHAZAN 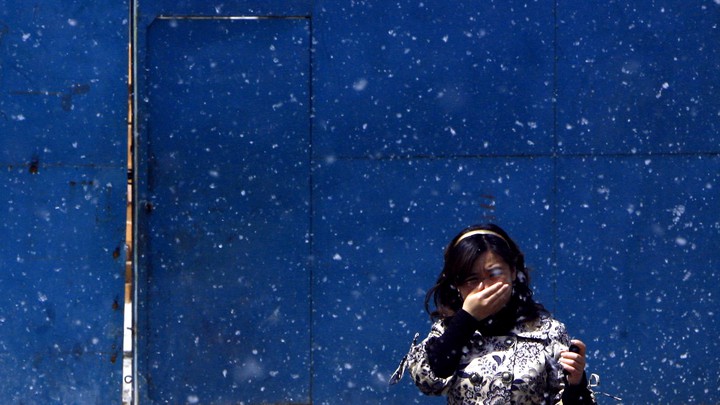 A few years ago, Maya Nanda began noticing a strange pattern among her patients. A pediatric allergist at Cincinnati Children’s Hospital Medical Center at the time, Nanda treated children who had reactions to everything from pollen to pets, and she realized that kids with severe allergies also seemed to have higher rates of anxiety and depression. These young patients seemed anxious when they were discussing their symptoms, and they would often say they felt worried too. When one patient who had asthma complained of shortness of breath, Nanda discovered he was actually having a panic attack.

In 2016, Nanda and her colleagues published a study that found that among 7-year-olds, allergies were indeed associated with depression, anxiety, and symptoms such as being withdrawn. Kids with hay fever had a threefold risk of depression and anxiety. Recently, more evidence has supported this link—and not just in children. A study of German adults that came out in April also found that generalized anxiety was associated with seasonal allergies.

If further research bolsters this relationship between allergies and mental health, it could provide a fascinating glimpse into how our bodies might influence our minds, and possibly vice versa. Two seemingly unconnected diseases, each affecting millions of Americans, could turn out to be not so different after all.

The most recent paper had notable limitations. Nanda, now at Children’s Mercy in Kansas City, Missouri, points out that the study’s authors didn’t adjust for factors such as socioeconomic status, the subjects had an average age of 61, and the data were based on the self-reporting of allergies. Moreover, some studies have identified no link between allergies and anxiety, leading some researchers to think the studies that have found one simply have similar methodological issues. (The authors of the recent paper did not respond to requests for comment.)

But at this point, several different papers have determined that people with allergies are more likely to be anxious. In 2013, a team of researchers found that not only were allergies associated with an increased prevalence of anxiety and other mood disorders in adults, but people who had been treated for their allergies were less likely to have mood or anxiety disorders than those whose allergies went untreated. A small 2017 study found that children with a food allergy were significantly more likely to have anxiety. Other studies have even identified a link between pollen allergies and an increased risk of suicide—a potential explanation for why suicides seem to rise in the spring.

“There is good circumstantial evidence that’s growing that a number of mental illnesses are associated with immune dysfunction,” says Sandro Galea, a physician and epidemiologist at the Boston University School of Public Health.

If the link is in fact real, allergies could be causing anxiety and other mood disorders in a few different ways. For one, it’s stressful to be sick, and people with allergies frequently feel like they have a bad cold. The experience of straining to breathe, or of coughing and wheezing, could simply make people feel anxious.

Then there are biological explanations. Allergies trigger the release of the stress hormone cortisol, which can interfere with a feel-good brain chemical called serotonin. It’s not clear how the cortisol does this, Nanda says; it might inhibit the production of serotonin or make it fail to bind with its receptors properly. But when something goes wrong with serotonin, the theory goes, depression or anxiety might set in. Allergies also cause inflammatory chemicals called cytokines to collect in the nose and sinuses. From there, these cytokines can leak into the blood, where they might affect the central nervous system and the way the brain functions.

Perhaps there is even an evolutionary reason the allergy-prone would be anxious. It would make sense, for example, “that if you are an allergic person, you have a certain amount of anxiety to avoid your allergens,” Nanda told me.

It’s possible the allergies-anxiety relationship works both ways, but more evidence suggests that allergies cause mood disturbances, rather than the other way around, says Ahmad R. Sedaghat, an associate professor of otolaryngology at the University of Cincinnati. He suggests yet another possible cause: Our bodies might produce a dampened mood when we’re sick in order to keep us indoors and resting so we can recuperate.

“Evolutionarily, all animals have this reaction, called ‘sickness behavior,’ when they’re sick. It’s meant to conserve energy,” Sedaghat told me. “The problem is if you have persistent inflammation of the sinuses, what happens over time is that the inflammation essentially builds on itself, making the anxiety and depression worse, which makes it easier for the inflammation to cause more anxiety and depression, and you fall into a vicious cycle where you can’t break out.”

More studies need to be done to determine how, exactly, allergies might influence mental health. In the meantime, several researchers told me, patients who suffer from both allergies and anxiety could benefit from understanding that the two might be connected. Often, treating allergies can make someone’s depression and anxiety symptoms improve as well. “If you have allergies and anxiety,” says William Yao, an assistant professor of otorhinolaryngology at the University of Texas Health Science Center in Houston, “and you ignore your allergy symptoms, it might be challenging to treat the anxiety.”

Why do my allergies change as I age? By Sara Chodosh This child and adult probably have very different…