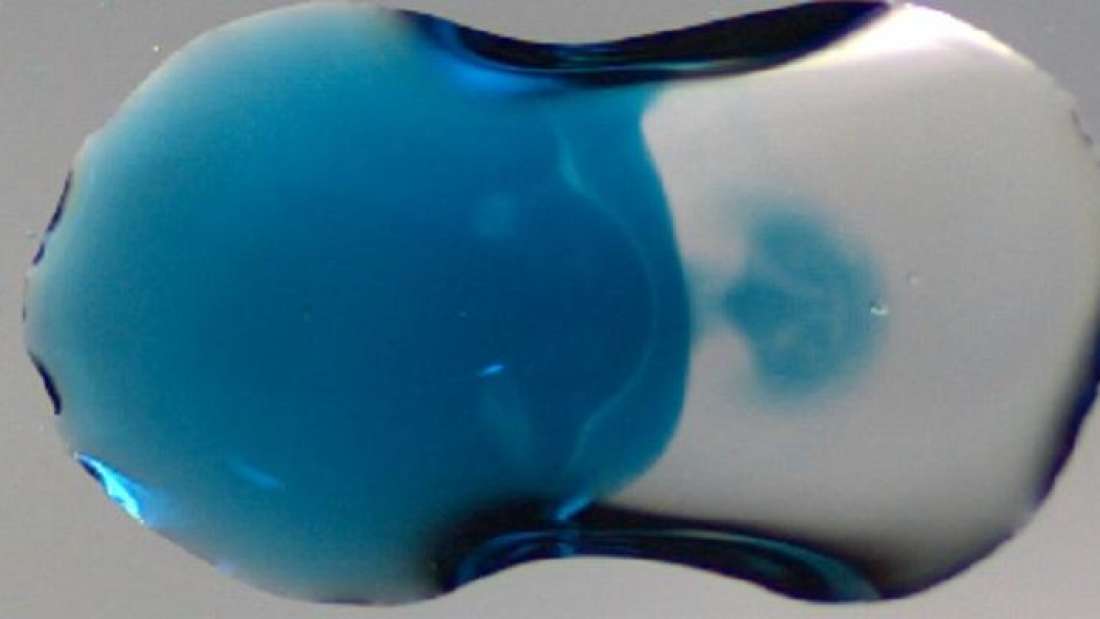 UNDERSTANDING HOW DROPLETS INTERACT WITH EACH OTHER COULD HELP NEW APPLICATIONS IN 3D PRINTING, WHERE CHEMICALS ARE DEPOSITED IN LAYERS TO BUILD AN OBJECT. UNIVERSITY OF LEEDS

When the Spice Girls wrote their hit love song 2 Become 1, they probably didn’t have fluid dynamics on their minds. However, the title is the perfect caption for the moment when two liquid droplets come together to form one mass, featured in a study published in Physical Review Fluids. New imaging techniques, which captured this interaction, can give scientists an insight into the super-fast world of droplet dynamics, aiding new applications for 3D printing.

Using two cameras operating at up to 25,000 frames a second, scientists were able to study the interactions between two droplets. University of Leeds

Two synchronized cameras, shooting up to 25,000 frames a second, recorded different angles of the droplet interaction. As one dyed droplet was dripped from a pump, landing next to a clear droplet sitting on a slide, both a side-on and underneath view allowed researchers to study both surface and internal changes to the droplets.

“In the past, there have been instances when two droplets impact and you were left wondering whether they have mixed or has one droplet just passed over the other,” Dr Alfonso Castrejón-Pita, an associate professor and co-author of the study, based at the University of Oxford, said in a statement. “Having two cameras record the droplet interaction from different viewpoints answers that question.”

In this footage, the side-view camera shows the blue droplet sitting on top of the clear droplet, where the surface tension between the two is preventing them from mixing. From the images captured underneath the slide, a more dynamic picture is seen. As one droplet is dropped onto another, in under 15 milliseconds a surface jet is created.

A side-view of the droplets revealed that the blue droplet just sits on top of the other. University of Leeds

“We were able to expose the internal flows, whilst imaging at a sufficient speed to capture the fast dynamics,” Dr Mark Wilson, an associate professor at Leeds and lead supervisor of the project, said.

Surface jets formed in under 15 milliseconds, and could be observed underneath the droplets using a set-up of a camera and mirror. University of Leeds

Understanding the intricacies of droplet dynamics provides a better assessment of how droplets mix, which the researchers argue is important for the future of 3D printing.

“The chemistry behind emerging 3D-printing technologies involves having chemicals deposited onto a surface,” Thomas Sykes, a PhD researcher at the University of Leeds and lead author of the paper, said in a statement. “We often need those chemicals to be positioned in a highly specific way, for example we may want the droplets to lie side by side or for one droplet to rest on another. On other occasions we want them to mix completely, to produce a desired reaction to 3D print more complex structures.”

“The imaging techniques developed [in this study] have opened up a new window on droplet technology,” Dr Wilson concluded.