How the Cowboy Saddled Up and Rode Into American History 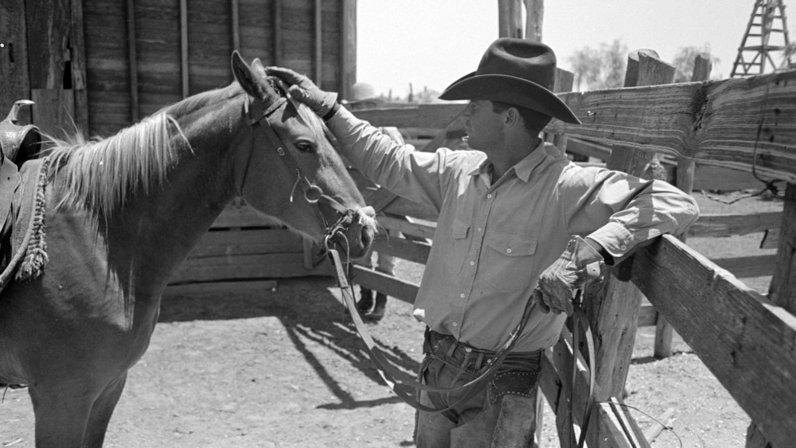 The whole cowboy image we know today has roots that extend a long way from the American West. LIBRARY OF CONGRESS

Whether it's John Wayne or Lil Nas X, the cowboy holds a sacred place in the pantheon of American heroes. But the cowboy that we know didn't spring fully formed from the dust and tumbleweeds of the Wild West. The original cowboy, in fact, had nothing to do with the Wild West.

It all began in Europe with three central elements: Man, cow and horse. 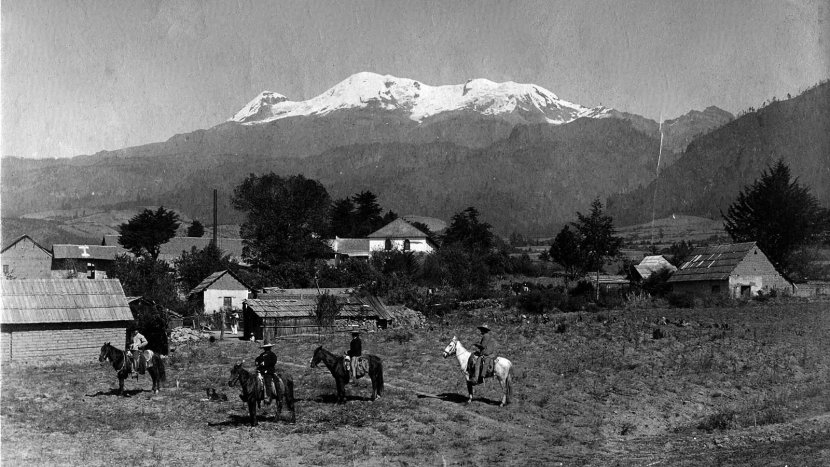 Mexican cowboys, or vaqueros, are the direct predecessors to the American cowboy. These vaqueros were photographed on the range in Iztaccihuatl in Mexico. PHOTO BY ABEL BRIQUET/BUYENLARGE/GETTY IMAGES

In Spain, for centuries, the horse was king. "The Spanish culture ... endowed horsemanship with high status," Richard W. Slatta writes in the introduction of "Cowboys of the Americas," his 1990 social history of cowboys in the Western Hemisphere. "Official portraits of Spanish kings depicted them astride pawing, rearing horses."

The Spanish used their horses in a burgeoning livestock economy (which included cattle and sheep) to complement farming in the 15th century. And when the Spanish made their voyages to the New World in the late 15th century, they took with them horses and cattle. Eventually, from Hispaniola (the island now claimed by the Dominican Republic and Haiti), the men, the horses and the cattle made their way to Florida and parts of what is now Mexico.

The cattle multiplied, and the need for horsemen to track them down and keep them in line — cows were needed then more for their hides than their meat — grew. So ranchers trained natives, who came up with all sorts of new cow-handling techniques. And the vaquero was born.

A vaquero — the word comes from the Spanish word for cow: vaca — is the direct predecessor to the American cowboy.

From Russell Freedman's "In the Days of the Vaquero: America's First True Cowboys:"

Vaqueros were herding cattle on the Mexican plains nearly five hundred years ago. Often they rode barefoot. They wore what clothes they had at hand. In the eyes of their Spanish masters, they were nothing more than poor Indian laborers on horseback. But they were the first of their kind, and they invented the cowboy trade as we know it today.

Other cowboys proliferated throughout Central and South America. The llanero in Venezuela. The charro in parts of Mexico. The huaso in Chile. The gaucho in Argentina and Uruguay. They all can trace their ancestors to the vaquero.

America, too, would soon have its own version of a horseman and cattle herder. 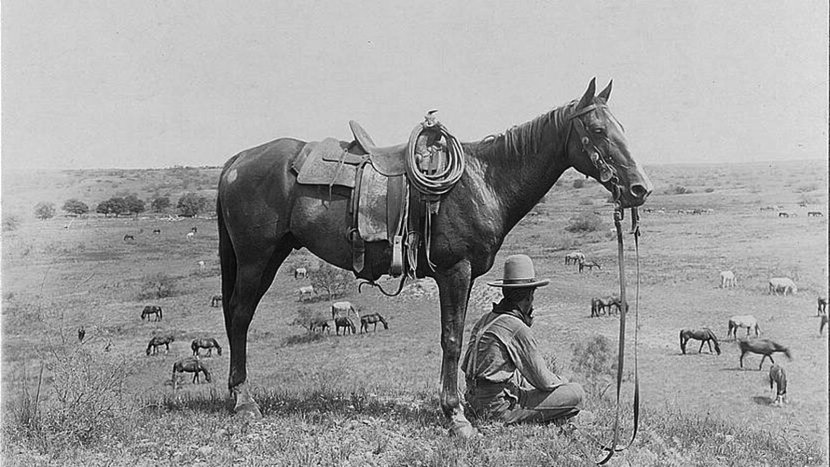 American cowboys modified their saddles to include horns, introduced sun-blocking hats and leg-protecting chaps.LIBRARY OF CONGRESS

As they learned to rope and ride and throw lariats, as they modified their saddles to include a horn to anchor a rope to, as they introduced sun-blocking hats and leg-protecting chaps, vaqueros moved into what is now Texas. And their influence was felt even farther west. In 1832, King Kamehameha III sent for some vaqueros to help with wild cattle in Hawaii. The Hawaiian cowboy became known as a paniolo, said to be a Hawaii-fied version of the word the vaquero spoke, español.

Eventually, an American counterpart formed and spread throughout the West. Cowboys had other names: cowhands, cow punchers, cowpokes, cattlemen, buckaroos and drovers (officially, those who move cattle from one place to another on a cattle drive). But the work was the same. Long days. Nights on the plains. A lot of dust. Some danger from rustlers and natives. And when they weren't working the herds, they were branding cattle, fixing fences, caring for their horses and performing other hard labor around ranches.

They weren't necessarily gamblers and gunfighters (like, say, Wild Bill Hickok), or gunslinging lawmen (like Wyatt Earp or his showy buddy, Doc Holliday), or deadeye sharpshooters (Annie Oakley), or all-out showmen (like Buffalo Bill Cody), though all those legends have legit claims to a spot in the Wild West Hall of Fame. And, in a way, all those types have become known as cowboys.

"The cowboy of the American West, a dashing figure in popular novels and films, was in reality a poorly paid laborer engaged in difficult, dirty, often monotonous work," Slatta wrote in The Cowboy Encyclopedia. "The Cowboy's work year centered on two big events, the roundup and the long drive. Roundups were held in the spring and often also in the fall. After cowboys had herded cattle to a central location, they branded newborn calves, castrated and dehorned older animals, and, in the spring, chose the cattle to be taken to market."

At one time, tens of thousands of cowboys worked ranches throughout the West. By the end of the American Civil War, an estimated 25 percent of those were Black cowboys, many of them former slaves. But the cowboys' heyday didn't last long. The invention of barbed wire (in the late 1800s) helped pen cattle in and the expansion of railroads made long cattle drives less necessary.

In contemporary retellings, especially in Hollywood westerns, cowboys (most of the time) are honest, hard-working, of strong moral character and of few words. They're almost always white, too. And they all know how to use a gun.

It's not a particularly accurate image. But, like the cowboy himself, it is an enduring one. 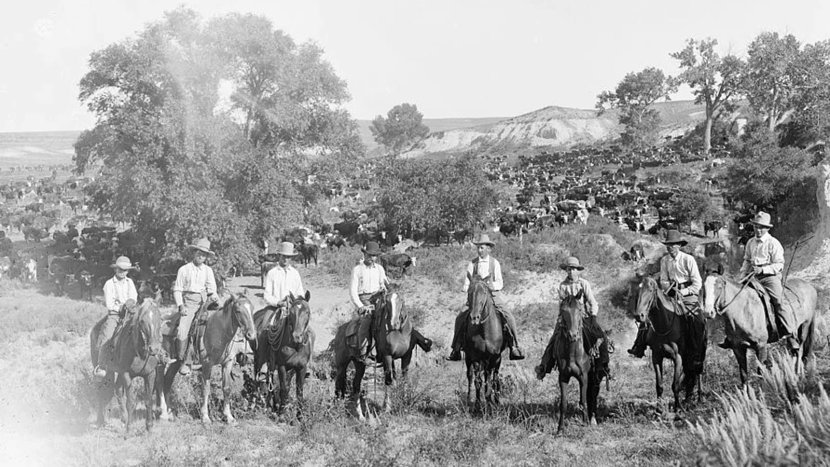 Much of the cowboy's work centered on two big events: the roundup and the long drive. LIBRARY OF CONGRESS

Another predecessor to the familiar Wild West cowboy is the Florida cowboy, who used long whips and dogs in his work. (Cattle roamed through the sandy scrub brush of Florida not long after they were introduced to the New World.) When famed Old West painter, sculptor and writer Frederic Remington went to Florida to report on the cowboys — whom he compared unkindly to the Western cowboys — he dubbed them "crackers," ostensibly for the sound of their whips.

Is it rude to block people on social media? BY KATE KERSHNER If you're asking yourself if it's rude…