Maybe not to have the word “man” in their word anymore! 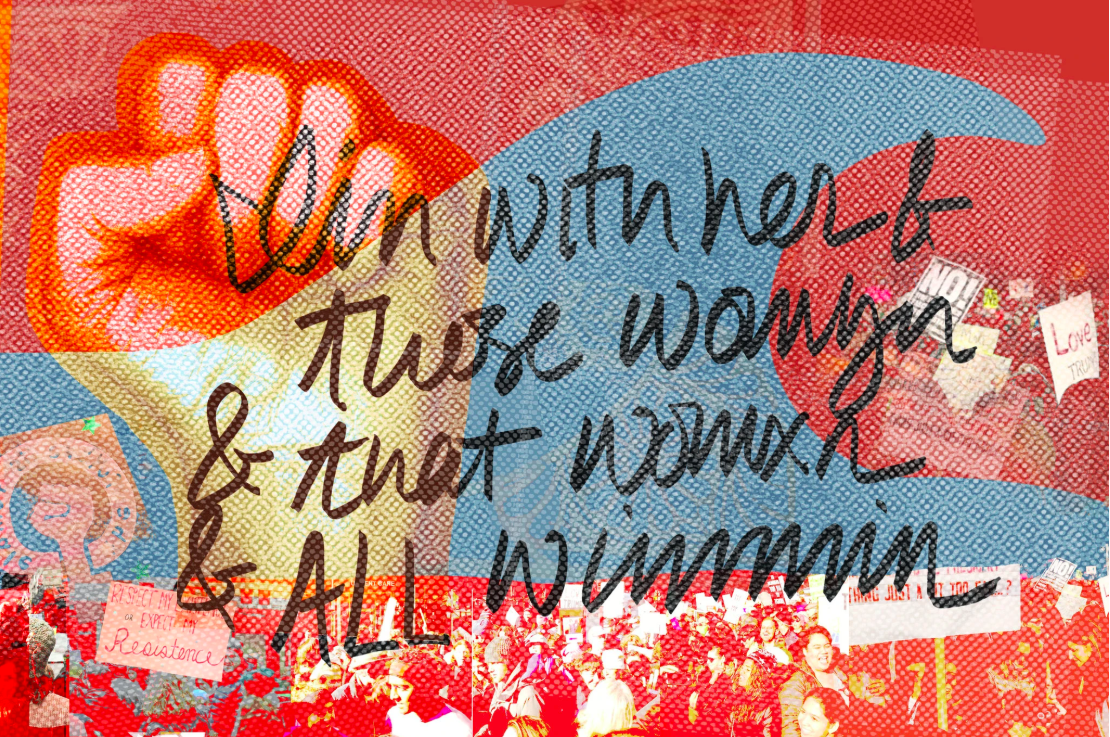 “Our organizing group is superdiverse, and one of the core organizers, who is a nonbinary person, proposed that we use the word ‘womxn’ to make sure that everyone felt included,” said Elizabeth Hunter-Keller, the communications chair for what became known as the Womxn’s March Seattle. Ebony Miranda, the organizer who proposed using “womxn,” said her understanding of the word was: “women and those affected by misogyny, or women-related issues.”

Ms. Hunter-Keller said: “There were a lot of, for the most part, white women, who wondered why we had to use the ‘x’ and asked us about it. But when we talked to them online, most were totally understanding.”

After Ms. Gottesdiener graduated, she printed the design on T-shirts that popped up on Instagram, at rallies and in stores like Urban Outfitters. Ms. Gottesdiener, who makes popular artwork “based in the spiritual, feminist and mystical,” more recently created a new design based around the word “womxn.”

She has joined a long list of females who have felt dissatisfied with their gender’s identifying word and have experimented with the alternatives. According to Keridwen Luis, a professor of sociology at Harvard University, feminists have tinkered with “woman” and “women” for decades to address a recurring annoyance.

“If you go back to the logical root of the word, it’s that ‘men’ is the default,” Ms. Luis said. “And in many cases in English, we’ve just reverted to using the masculine as the default for a lot of things. Waiter and waitress. Actor and actress. It used to be that poet was a masculine term and therefore if you were a woman poet, you have to be a poetess, which sounds really Victorian and like you spend a lot of time on a fainting couch. Fortunately that has dropped out of use.”

“Wimmin,” after the Old English original, was one of the first alternative words to show up in the 1900s. Then “womyn” popped up and gained steam in the 1970s along with the occasional “wombyn.” To some, “womyn” seemed to include everyone, and still does. To others, like the organizers of the Michigan Womyn’s Music Festival, the feminist answer to Woodstock, it was only for “womyn-born-womyn,” Ms. Luis said.

While hard to pronounce, “womxn” was perhaps the most inclusive word yet, using an “x” to tinker with the word’s literal approach to gender in a similar way as “Latinx,” which has become an ungendered alternative to words like “Latino” and “Latina.”

But even “womxn” has its haters. In October, a London museum and library called Wellcome Collection sent out a tweet that included the word. In response, hundreds of followers, including many women, tweeted back with complaints. “I’ll be a womxn when men become mxn,” one user tweeted angrily. The Wellcome Collection said at first that it had used the word to show that its space welcomes diverse perspectives, but subsequently issued an apology.

It’s common for people to get upset about change when it comes to language, because speakers often get attached to the words they use, said Lera Boroditsky, an associate professor of cognitive science at the University of California, San Diego. When she studied speakers whose native languages used gendered nouns (Spanish, French, German and Russian are examples), she found that this influenced the way people thought about the world, even if they weren’t aware of it.

“My native German-speaking research assistant was skeptical about the idea,” Dr. Boroditsky said. “She didn’t think that grammatical gender would change the way people thought. Then we started talking about the word ‘giraffe,’ which is masculine in my native Russian but feminine in German. I said, ‘It makes sense for ‘giraffe’ to be masculine, they’re so tall.’ Then she started arguing, ‘You can’t think of a giraffe as masculine, they have such long eyelashes!’”

Dr. Boroditsky wasn’t surprised at the many experimental modifications to “women.” “It could be that a lot of people have never parsed out that ‘women’ equals ‘wo’ plus ‘man,’ but it also could also be that many people don’t notice it,” she said.

But many feminists have noticed. Megan Conway and Aliya Cutler remedially named their Beacon, N.Y., business and community space Wyld Womyn. “There was a sense of inclusivity to it,” Ms. Cutler said. “To us, that term includes all cis and trans women and any other person who identifies as a woman.”

Nisha Moodley, a women’s leadership coach in Mill Valley, Calif., started incorporating “womxn” on social media and event invitations to make it clear that trans women were included in the women’s events she hosts. “The fact that there was an alternative spelling made me aware that some women have been feeling excluded,” she said.

Eli Erlick, a transgender organizer and Ph.D. student in feminist studies at the University of California, Santa Cruz, began using “womxn” on social media in the past few months, even though her feelings about the term are complicated. “We are fighting for womanhood, just to be recognized in the first place,” she said. “But I embrace ‘womxn,’ It allows us to define ourselves outside of the context of being men, but also to recognize that there are different ways to be a woman.”

For now, though, there are only a couple of ways to type it without tripping spell-checkers. According to Peter Sokolowski, Merriam-Webster’s editor at large, “womyn” was entered into the company’s abridged dictionary in 2002.

“There is certainly a lot of evidence that ‘womxn’ is being discussed and used, but it’s still a relatively new term,” Mr. Sokolowski said. “We’ll be watching it.”

Why were so many prehistoric animals so big? BY KAREN KIRKPATRICK The Diplodocus longus could grow up to 92…