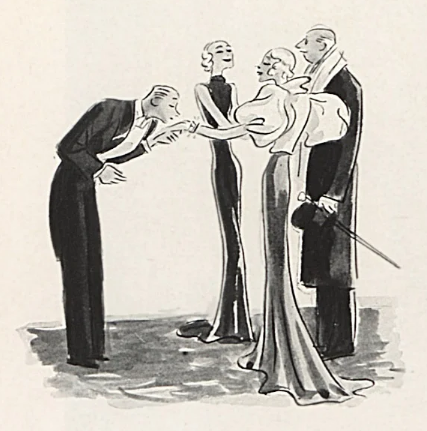 Among the many questions I receive on Facebook and Twitter about etiquette, one is from a correspondent who wants to know what is the latest thinking concerning men’s manners toward women? What, he wonders, is the status in this modern age of “Ladies First”? Is it still relevant? Or hopelessly outdated and chauvinistic? At this blossoming point in the summer season of social give-and-take, it’s a good question.

As a reminder, here are some of the traditional “Ladies First” points that men have been taught over the years: When men wore hats, they took them off in your presence. He stood up when you entered and exited the room or arrived or left the dining table whether at home or a restaurant. He held your chair for you. He paid for dinner. It’s ladies first though any doorway. He shakes your hand only when you offer it first, same for a kiss on the cheek. Whether you are a friend, a date, or a business associate, he is ten minutes early when meeting you so you are not left standing or waiting alone. On public transportation, a gentleman gives his seat to you. Later, before it was entirely forgotten, it was revised that one volunteers ones seat to any lady burdened with packages, older, or more pregnant than you.

Of course, there are two sides to any story, including this one.

Case number 1: A young fashion-world executive who describes herself as a “post-feminist” recently went on a first date with an investment banker. The restaurant was his choice. The meal was good, the conversation fine, and when the bill came to the table, placed equal distance between them, he reached for it, read it and said, “Okay, your share with tip is $119.” Right or wrong, the lady was angry. He had invited her and so she expected him to pay. Like thwarted intentions and undelivered communications, nothing can cause greater upset than unfulfilled expectations.

Case number 2: Two elegantly dressed men and one elegantly dressed woman in a midtown New York City office building’s elevator. Elevator arrives to the ground floor, and the man nearest the door steps aside so the lady can exit first. The second man also waits. She sails briskly through the door without acknowledging the courtesy. The second man asks the first, “Why do we even bother?” The first fellow answers, “I don’t know, man. I just do these things for my mother. If she saw me, she’d like it.”

Like you probably, I prefer to think that the people I associate with have warm hearts and warm hearts generate good manners. But it’s a rough-and-tumble world out there, and good manners seem to have been an early casualty. We see what happens when the media finds any act of courtesy between the sexes: It’s like spotting an animal in the wild, it is so rare, and the good news goes viral whether it’s Prince William holding an umbrella over the Duchess of Cambridge at a film premiere on a rainy night or Brad Pitt opening a car door for Angelina Jolie in Malta (or heralding it an act of chivalry when Russell Brand doesn’t seek everything he could get under California law in his divorce from Katy Perry.)

On subways, buses, elevators, and in other situations where we encounter others we do not know, many men will not follow the “Ladies First” rule because they have been told it might come across as chauvinistic, that just because you are female, he thinks you need his help. In the more personal situations—like dating—“Ladies First” is still recommended. From the get-go, how he behaves toward you now indicates how you will be treated in the future.

“I expect a man to be kind and respectful,” says Samantha Boardman, M.D. “As long as my arms are working I am happy to open doors for myself, but I appreciate the gesture whenever anyone opens or holds a door for me—it’s evidence of civility and decency.” Vogue’s Style Editor at Large, Elisabeth von Thurn und Taxis, agrees. Men’s good manners “shouldn’t be about earning a smile or a thank-you,” she says. “I think no matter what the woman’s reaction is, good manners will be registered somewhere.” But, when in doubt, just do it says the Southern-raised gentleman designer and recent CFDA award winner for menswear Billy Reid. “Manners do not go unnoticed,” he observes. On a first date, the man should “take the guess work out of it and pay. Pick her up at her door and walk her back to her door after.” So, when it comes to the bill in this day and age, are men really expected to pay? Yes, and especially if they did the asking. “A man should pay within his own financial reason,” says von Thurn und Taxis. “Go to places you can afford. Cook dinner at home. Or take her out on a picnic. It’s the gesture that counts, not the amount of money spent.”

Some of my favorite guidance I found on “Ladies First” is in Vogue’s Book of Etiquette and Good Manners, published in 1969, at the height of the women’s movement. “A man is still expected to show a certain deference toward a woman, whether she be the president of a large corporation, a skeet-shooting champion, or the most average citizen,” wrote Vogue. “Most women have more intuitive social sense than men; tact comes more naturally to them. It is these qualities, so necessary to pleasant living, that men salute when they treat a woman with deference, not her traditional dependence and helplessness, both of which are almost nonexistent today.”

So the consensus is “yes” to “Ladies First,” but keep in mind, it is about courtesy and kindness, respect and admiration, not some fusty set of rules that either overtly or covertly implies a woman is a weaker species. But you already know that, don’t you?