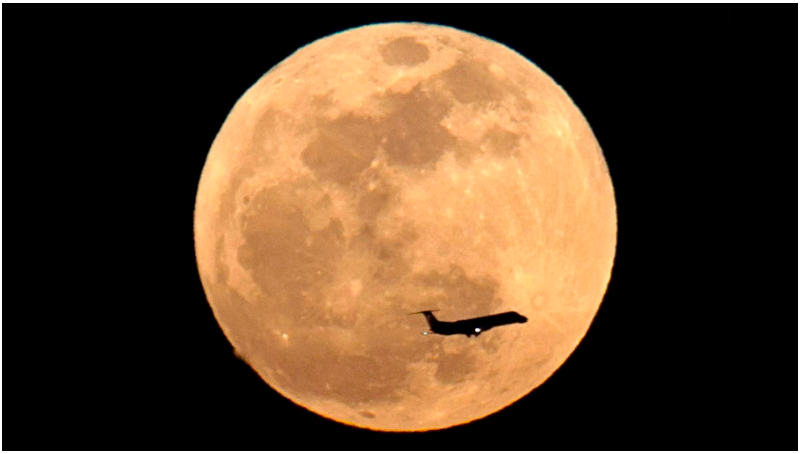 A jet on the approach to Los Angeles International Airport crosses in front of the 'Super Moon,' an event that occurs when the full moon reaches the part of its path that is closest to Earth. What would happen if there was no moon?
DAVID HUME KENNERLY/GETTY IMAGES

It's easy to think of the moon as our affable neighbor who keeps to himself. We like him well enough, but if he moved, our main concern wouldn't be that he had left — it would be the fear of someone taking his place.

Let's keep in mind that the moon is partly made from the foundation of our own planet. It happened when Earth was a molten lava infant at just 30 million years old. A giant impactor hit Earth, taking some of its mantle with it when it ricocheted off into space. This impactor merged with the hot mantle to form the moon. A billion years ago, the moon stopped being geologically active [source: Lunar and Planetary Institute]. But that's not to say that the moon is doing nothing for us. Take a look at a few things that we would miss if our moon decamped to another neighborhood — or never moved to our 'hood in the first place.

Perhaps the most obvious fallout of an absent moon would be the tidal changes. If the moon wasn't affecting our oceans, the tides would be about a third the size they are now; the sun would "take over" tidal changes, but it just doesn't have the same pull as the moon [source: Masters]. The moon also affects the altitude of the ocean; the gravitational pull of the moon causes a "bulge" of water around the middle of the earth. In other words, the poles have less water than the equator [source: ScienceLine]. If the moon didn't exist, the bulge of water would disperse, rushing to the shallower poles.

The moon is also helping to slow down Earth's rotation. In fact, the moon is slowing us down a tiny bit every single day. (If you can divide "microseconds per year" into daily increments, that is.) If we had no moon to slow our roll, we'd be spinning ourselves six-hour days. While that might sound intriguing, keep in mind that it would lead to all sorts of consequences. There would be increased wind and storms for one, but it would also probably have affected how life evolved on our planet. With only a few short hours of daylight and darkness, who knows what plants and animals could have developed — or lost out.

And then there's the matter of our axis. The moon stabilizes us to keep that nifty 23 degree tilt that makes for mild seasons and environments. Without the moon, we might be careening from upright to sideways. With a near-zero degree tilt we'd barely see a few minutes of sun or — like Uranus, with its 97-degree tilt — we might find ourselves in 42 continuous years of sunlight, followed by 42 years darkness. And make no bones about it – it would be pretty darn dark without the light of the moon beside us.

Author's Note: What If We Had No Moon?

The moon is keeping us at a decent pace and tilt, as well as keeping us properly watered. But remember that the moon isn't just a hunk of rock. Countless tales, metaphors, meanings and art have come from our relationship with the mysterious glowing orb.

Posted Nov 11, 2019 Here are a few things to never do or say to someone with anxiety. Even…