How to Escape a Sinking Car 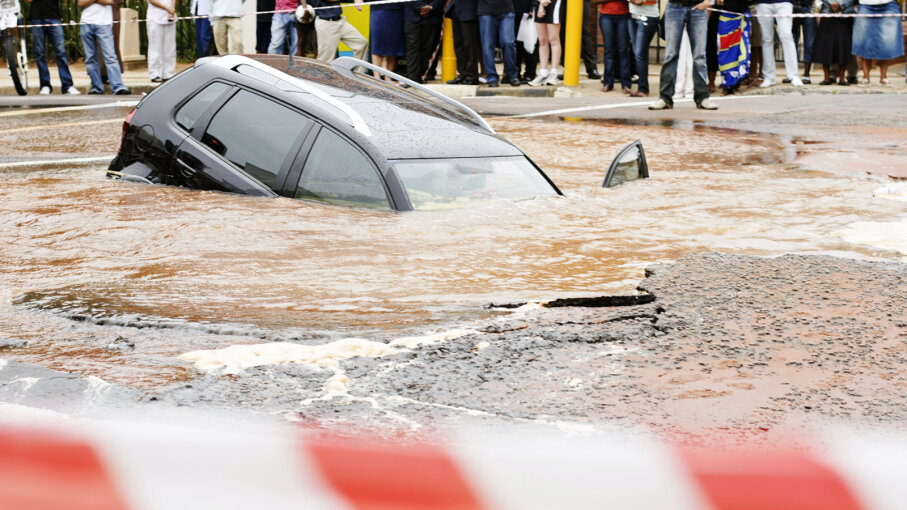 *Knowing how to use car escape tools could be the difference between life and death in an emergency. *(Image: © RAPIDEYE/GETTY IMAGES)

Have you ever considered would happen if you were trapped in your car? What if you ran off the road into a body of water and started to sink? Would you know what to do? Would you be able to break a window to escape?

Those questions are at the heart of a study from AAA. The report actually looks at the different types of glass in a car, and how that glass can affect your chances of escape if you had to break a window to get out.

The Type of Glass Matters

You might not even know it, but the glass for your car's windshield might be different from the glass in the windows. Some might be tempered glass, and some might be laminated glass. Laminated glass is designed not to break — even in a crash — to decrease the odds that someone in the car will be ejected.

That matters, because if you need to get out in an emergency, you might not be able to, even using car escape tools designed to help you. The AAA study showed that most car escape tools were effective at breaking tempered glass, but not laminated glass. In fact, none of the tools tested in the study were able to completely break through laminated glass — a few were effective at spiderwebbing the glass only.

What's worse is an increasing number of new vehicles have switched from using tempered side glass windows to laminated side glass windows (as many as one in three 2018 vehicles), in response to federal safety standards. And AAA's research indicates that consumers may not be aware of the change.

Just because the study shows car escape tools aren't always effective doesn't mean you shouldn't have one in your car. On the contrary. "AAA recommends a spring loaded-style tool, as we found that some of the hammer tools we tested broke when impacting the glass," Greg Brannon, AAA's director of automotive engineering and industry relation, says an email. "Keep in mind that any tool you select will only be effective for breaking tempered glass."

These tools are also especially useful in case your seat belt release doesn't work. Some car escape tools, like those made by resqme, incorporate blades that let you quickly and safely slice your seat belt, rather than fumbling with a buckle that may not open.

"We always recommend people who buy the resqme test it on a notepad to make sure the inner spring-loaded mechanism works," Benjamin Duprat, digital media analyst for resqme, says via email. "When pressing the head of the tool against the notepad, they should hear a little 'click' and they will observe a little hole from the blade on the surface."

You can also test the tool on a soft piece of wood, according to AAA, and you'll know the tool works if it leaves an indent mark. Duprat also suggests consumers watch online tutorials to familiarize themselves with the tool before they might actually need to use it.

So How Do You Escape a Sinking Car?
Now for the scary part. If you get into an accident where you must escape your car, especially if it's sinking in water, what do you do? Duprat reiterates that survival depends on having a plan in place — first.

That means knowing ahead of time what type of glass your car's driver side window has. If it's laminated, know you will need to escape through another window if it won't roll down. If your car has all laminated glass, it is critical get a window rolled down as quickly as possible, AAA's Brannon explains.

Both AAA and resqme recommend the S-U-R-E method as an easy way to remember what to do in the event of such an emergency:

Unbuckle your seat belt (or cut it if it's jammed)

Roll down or break windows

Don't call 911 until after you've escaped. You have about 30 seconds to a minute until water rises to the bottom of the passenger windows, so time is of the essence.

It's scary to think that you might need to prepare for an incident that traps you in your car, but experts agree that it's better to acknowledge the possibility. If you have a tool within easy reach and you have some idea what to do, you'll save crucial seconds that could make the difference between escaping from your car, or not.

Most cars that have primarily laminated glass also have at least one window made of tempered glass. According to AAA, each of a car's windows should have a sticker in the bottom corner that indicates the glass type. If you can't find it, contact your vehicle's manufacturer and ask.

Next year's iPhone to be similar to iPhone 4, report claims By STAN SCHROEDER The 2020 iPhone might look…

Woman Mistakes Wasabi For Avocado, Ends Up in Hospital With Heart Dysfunction By DAVID NIELD As strange medical cases…