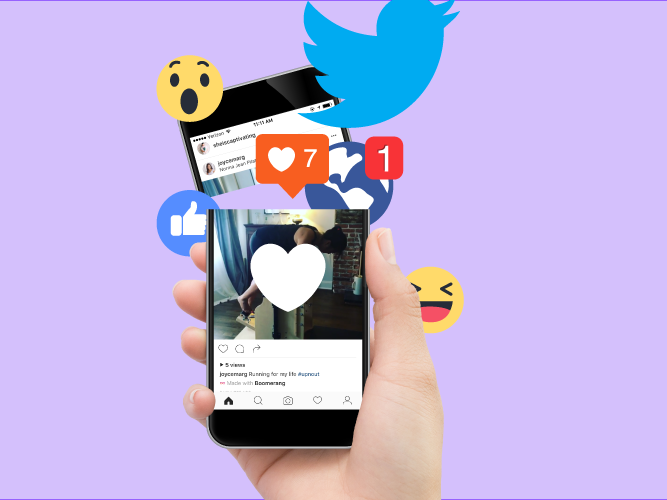 Thinking of going on a social media cleanse? Here's what you need to know.

"Social media cleanse"—a fancy term for deleting social media—has become something of a buzz-phrase in our increasingly plugged-in society. In December 2015, Ed Sheeran took an indefinite hiatus from Instagram after growing tired of "seeing the world through a screen." (He's since returned to the site.) In June 2016, Demi Lovato, who has a historically tumultuous relationship with the Twitterverse, stepped away from social media for 24 hours so she wouldn't "have to see what some of y'all say." Chrissy Teigen, Taylor Swift, Justin Bieber, and a handful of other celebs have all followed suit—seeking respite from the realm of mirror selfies, nonstop notifications, and internet trolls, if only for a mere 24 hours.

In a world where we #DoItForTheGram and take more food porn photos than we know what to do with, it's no surprise many of us have glamorized the idea of taking a break from the digital and getting back to our pre-technology roots. (I know I have.) But every time I step away from Twitter, or remove Instagram from my phone, or temporarily deactivate my Facebook account, the same questions arise: Is deleting social actually doing anything for my mental health? Are all those Snapchat stories, Instagram double-taps, and Facebook updates impacting my life that much? Or am I just making these periodical forays into the land of no social media for naught?

I combed the recesses of my brain for similar questions and posed them to a couple experts. Their consensus: Social media is associated with some bad stuff, but it's associated with a bunch of good stuff, too. If you're feeling fine about your technology habits, there's no need to guilt yourself into a social media cleanse. But if your affinity for Facebook, Instagram, Twitter, or Snapchat is causing you a ton of stress or is getting in the way of your life, then taking a break might be helpful. Here, six potential mental health benefits of a temporary social media cleanse.

A Bank of America-commissioned survey of 1,000 U.S. adults found that 71 percent of Americans sleep with or next to their smartphones. (Let's be real: I'm one of that 71 percent, and you probably are, too.)

But this can take a toll on your sleeping habits. According to the National Sleep Foundation, that blue light your phone screen emits can interfere with your body's production of melatonin—the hormone responsible for helping you get to sleep. Looking into that blue-lit social media void right before you settle in for some shut-eye can disrupt your ability to fall asleep. (You're not doing yourself any favors when you try to assuage your insomnia by checking Instagram or scrolling through your Facebook feed, either.) Needless to say, separating yourself from social media might lead you to spend less time on your phone—which might help you get to sleep faster.

2. It can force you to reprioritize in-person interactions.

Andreas Kaplan, a Europe Business School professor specializing in social media, tells SELF that excessive Facebook use is linked to things like social isolation, loneliness, and depression. And Jacqueline Nesi, a clinical psychology Ph.D. candidate at the University of North Carolina, backs that up. "Social media can be a great tool for keeping in touch with friends and family," she tells SELF. "But excessively using social media—at the expense of in-person interactions with friends or family—can negatively impact relationships and well-being."

According to research, excessive social media and technology use is associated with a lot of bad stuff—like high anxiety, low quality of life, and depression. But experts warn these results are only correlational—meaning relationships exist between usage and this bad stuff, but that doesn't necessarily mean that technology and social media cause the bad the stuff.

Still, Jacob Barkley, Ph.D. and psychology professor at Kent State University, tells SELF taking a break from technology could help some people mitigate their anxiety. For one thing, it could lessen the obligations some people associate with constant communication. Responding to new texts, emails, and Facebook messages nonstop can become stressful, and getting away from that—even for just a day—can feel great. (Barkley suggests setting up an automatic email reply to give people a heads up that you're on hiatus, so you don't have to worry about missing any urgent messages.)

4. It can help curb your FOMO.

Another huge plus of getting off social media? Avoiding the oh-so daunting FOMO, or fear of missing out. "When you're linked up to this huge network through this one device, [you can] feel that where you are isn't where it's at," Andrew Lepp, Ph.D. and professor researching media use and behavior at Kent State University, tells SELF. "It's almost natural to think that among all these other places there must be one that's more interesting than where you are right now." This, he says, drives the anxiety associated with cell phone use—and it also leads people to compulsively check their devices. "I always find that a bit ironic because they could be having a really nice time if they'd just put the device down," Barkley says.

But obviously, FOMO goes both ways. For some people, actively avoiding social media can create a FOMO all its own—for example, worrying that you'll miss a friend's big life announcement on Instagram or forget to wish someone a happy birthday because you missed a Facebook reminder.

5. It might inspire you to get a little more exercise.

Getting out from behind a screen might inspire you to get on your feet a little more. And exercise is associated with a bunch of great things, including decreased anxiety.

6. It can help you remember all that other stuff you like to do.

The logic is simple: If you stop dedicating time to one thing, you free up for time for other things. Lepp says he and his family go tech-free every Sunday—spending their time hiking or enjoying a nice meal together, instead. You might prefer to spend your time painting, going to the park, hanging out with friends, volunteering, working out, cooking, or doing a whole range of other things. The social media-free world is your metaphorical oyster; do with it what you will.

A final reminder: There's no need to give up technology altogether if you don't want to.

This list of potential benefits is just that—a list of potential benefits. It's not a point-by-point thesis urging you to sacrifice your social media accounts to the technology-free gods. If you feel good about your level of social media use, keep doing your thing. If you don't, then you might consider changing things up—but even then, you don't have to drop everything. You could take a break from social media once a week, or delete some apps from your phone, or take a trip somewhere isolated.

You have plenty of options. And the most important thing is that you do what makes the most sense to you.

Fertility rate: 'Jaw-dropping' global crash in children being born By James Gallagher The world is ill-prepared for the global…

Did coronavirus arrive in Spain over a year ago? Alejandro Garcia/EPA The novel coronavirus – SARS-CoV-2 – may have been…