Coronavirus: Eight charts on how it has shaken economies 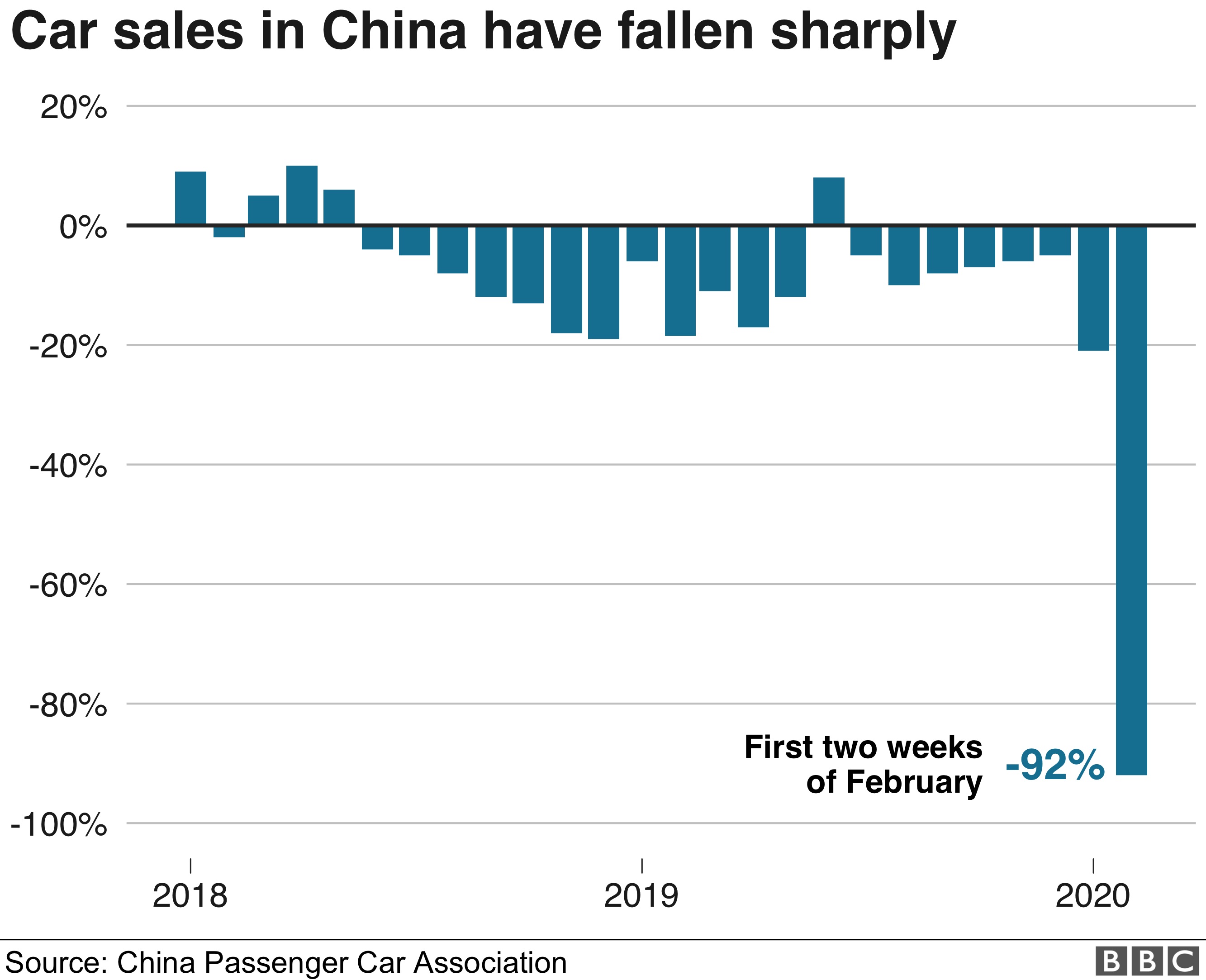 The coronavirus outbreak, has infected tens of thousands of people. Its spread has left businesses around the world counting costs.

Here are eight key maps and charts to help you understand the impact seen on different economies and industries so far.

If the economy is growing, that generally means more wealth and more new jobs.

It's measured by looking at the percentage change in gross domestic product, or the value of goods and services produced, typically over three months or a year.

The world's economy could grow at its slowest rate since 2009 this year due to the coronavirus outbreak, according to the Organisation for Economic Cooperation and Development (OECD). 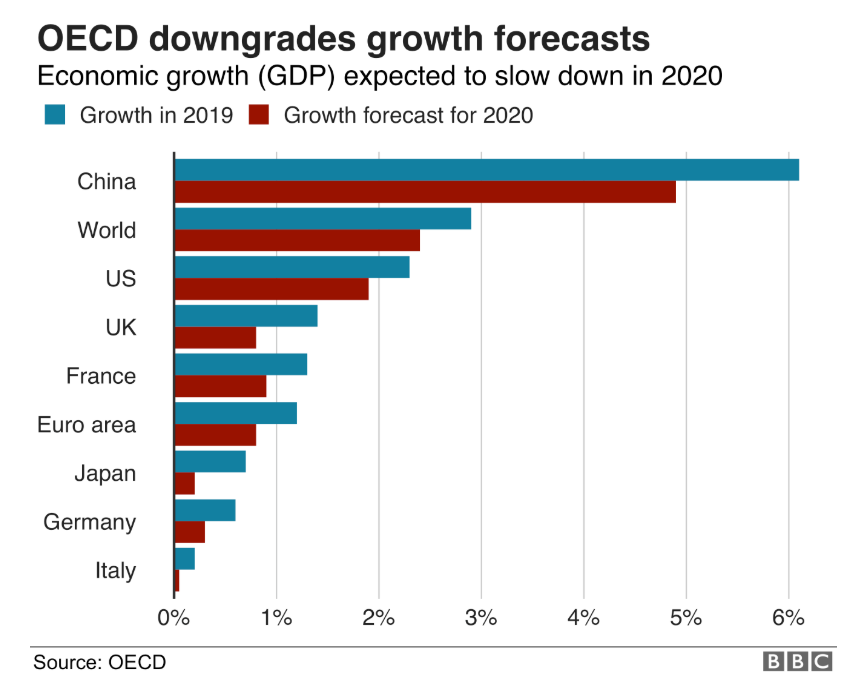 It also said that a "longer lasting and more intensive" outbreak could halve growth to 1.5% in 2020 as factories suspend their activity and workers stay at home to try to contain the virus.

Investors have been worried about the impact of the coronavirus as it spreads outside of China.

Big shifts in stock markets, where shares in companies are bought and sold, can affect investments in some types of pension or individual savings accounts (Isas).

The last week of February saw the worst performance for major stock markets since the 2008 financial crisis. 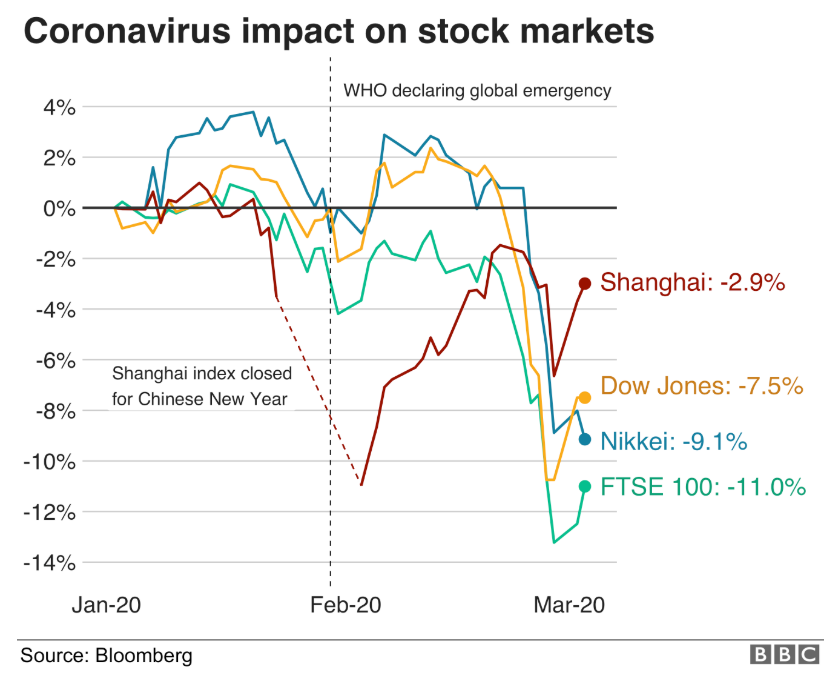 European and US stock markets have seen a slight uptick since then as it's hoped that countries will intervene to protect economies from the coronavirus outbreak.

The US central bank, for example, slashed interest rates in response to mounting concerns. That should, in theory, make borrowing cheaper and encourage spending to boost the economy.

China makes up a third of manufacturing globally, and is the world's largest exporter of goods.

But activity has decreased in the so-called "workshop of the world" as factories pause their operations to try to contain the spread of Covid-19. 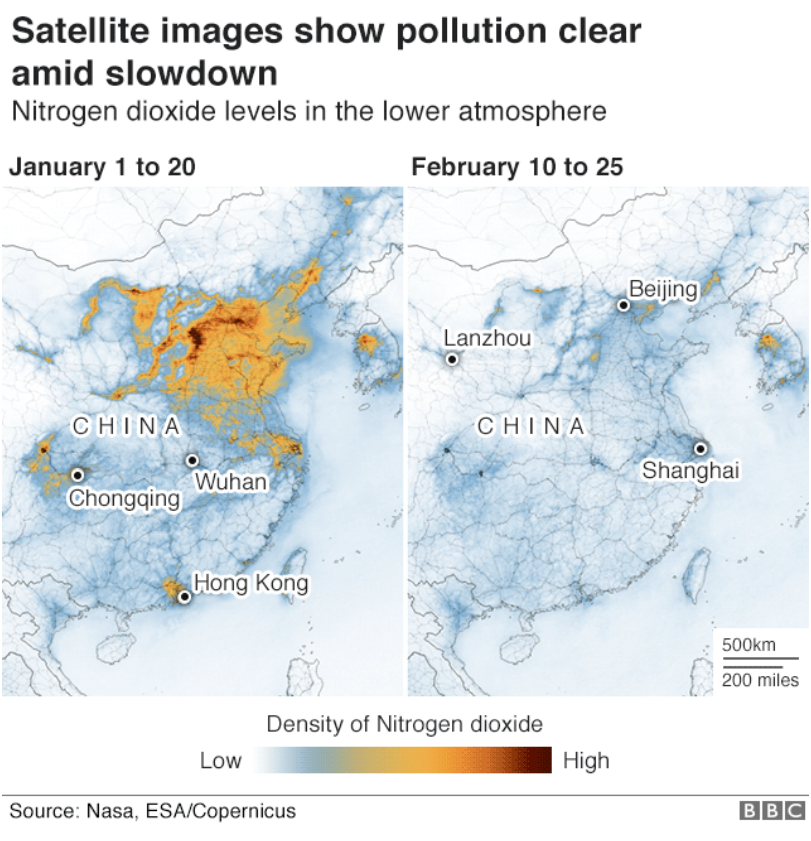 Nasa said pollution-monitoring satellites had detected a significant drop in nitrogen dioxide over the country. Evidence suggests that's "at least partly" due to the economic slowdown caused by the outbreak.

Restrictions have affected the supply chains of big companies such as Diageo, JCB and Nissan, who rely on China's production and its 300 million migrant workers. Jaguar Land Rover even said it had flown car parts in suitcases as some factories run out of parts for vehicles.

Fear of the coronavirus outbreak means that some people are choosing to avoid activities that might expose them to the risk of infection, such as going out shopping.

Restaurants, car dealerships and shops have all reported a fall in customer demand. 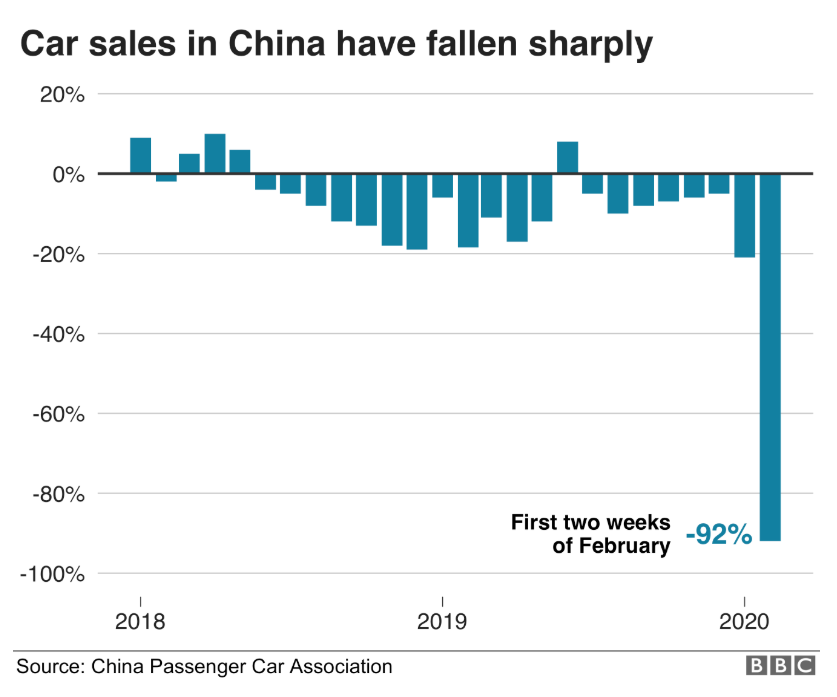 Chinese car sales, for example, dropped by 92% during the first half of February. More carmakers, like Tesla or Geely, are now selling cars online as customers stay away from showrooms.

Shipments of smartphones are also expected to take a big hit in the first half of 2020, before seeing a recovery later on. 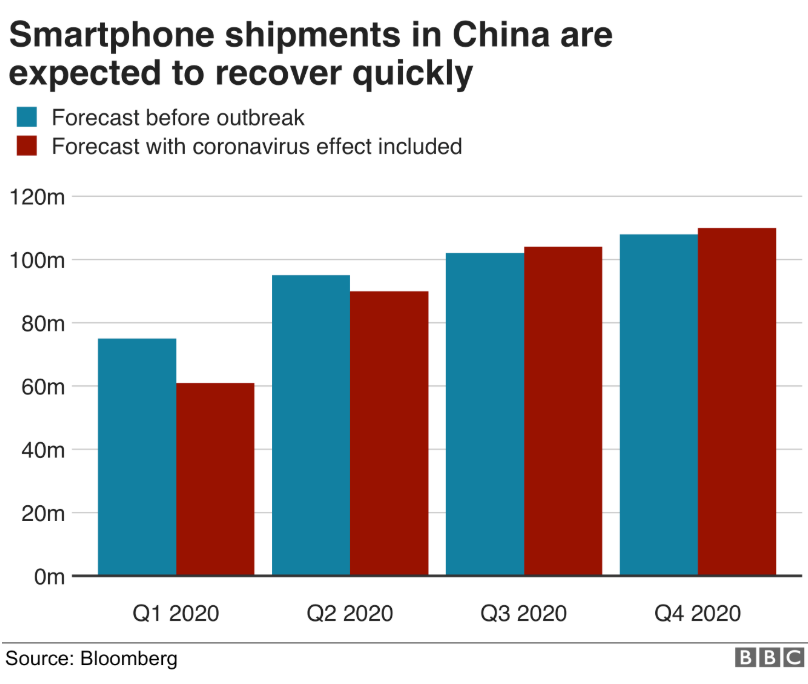 Apple was one tech giant who said sales had been affected by low customer demand.

The number of cases diagnosed is increasing around the world every day. Many countries have introduced travel restrictions to try to contain the virus's spread. 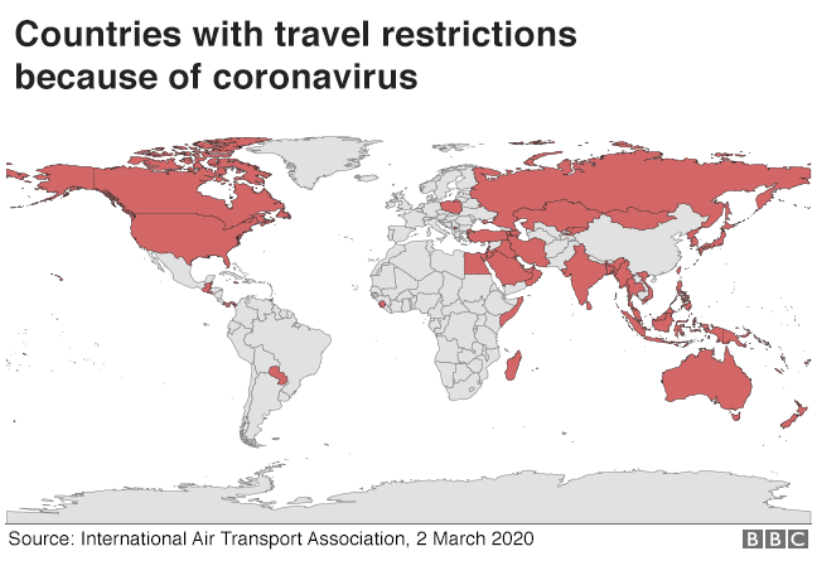 For example, the UK government advises against all travel to the Hubei province in China, where the virus originated. It's also issued special travel advice for Italy, which was the first European country to report a major surge in cases.

The travel industry has been massively impacted, with airlines cutting flights and tourists cancelling business trips and holidays. 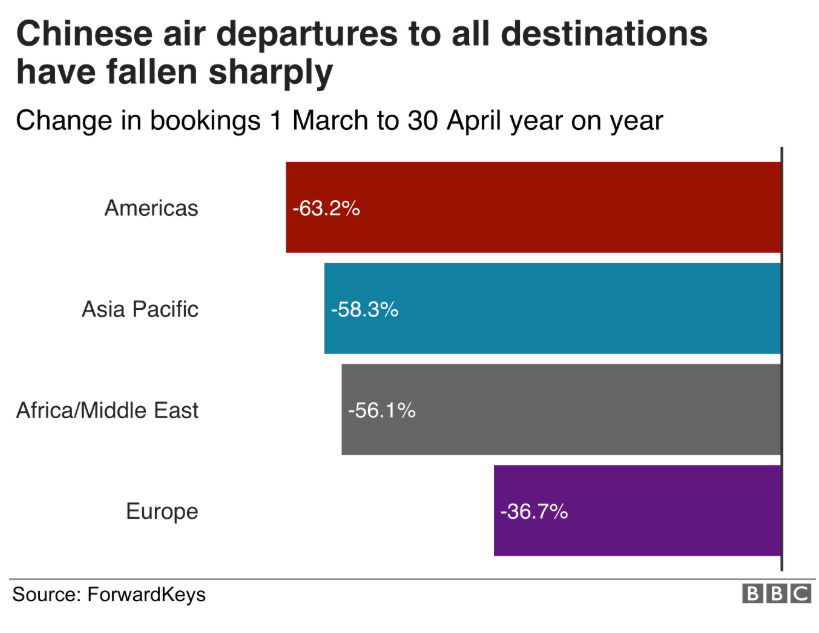 Data from analytics firm ForwardKeys shows international flights booked from China are behind by 55.9% in comparison with the same period in 2019.

UK travel industry experts have expressed concerns about Chinese tourists being kept at home. There were 415,000 visits from China to the UK in the 12 months to September 2019, according to VisitBritain. Chinese travellers also spend three times more on an average visit to the UK at £1,680 each.

As more large-scale events are cancelled and the number of flight cancellations increases, there are fears the industry could take a bigger hit.

It can be hard to find positives when people's jobs are affected, or - as in the case of the coronavirus outbreak - lives are being lost.

But in purely business terms, there are some bright spots. Consumer goods giant Reckitt Benckiser, for example, has seen a boost in sales for its Dettol and Lysol products.

The disinfectant is seen as providing protection against the spread of the disease, although its effectiveness has not yet been scientifically proven. 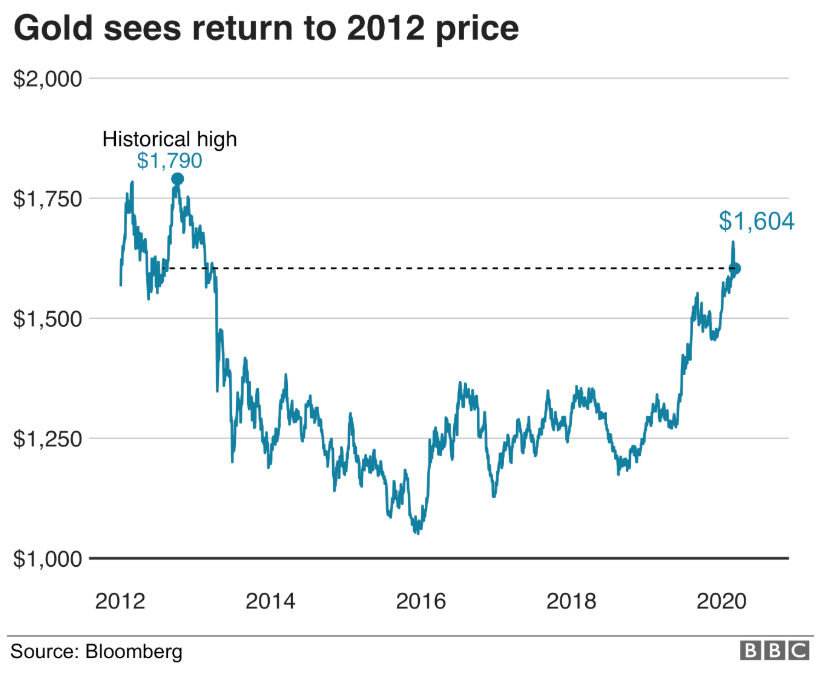 The price of gold - which is often considered a "safe haven" in times of uncertainty - has also increased. Its spot price hit a seven-year high of $1,682.35 per ounce in February.

Investors are looking to it amid fears the coronavirus spread outside of China will further hit the global economy and demand.

By Live Science Staff A Chinese woman holds her protective-mask-wearing dog in Beijing, China, on Feb. 7, 2020 in…

How the humble S-bend made modern toilets possible By Tim Harford "Gentility of speech is at an end," thundered…