5 Steps to Help You Overcome Nightmares 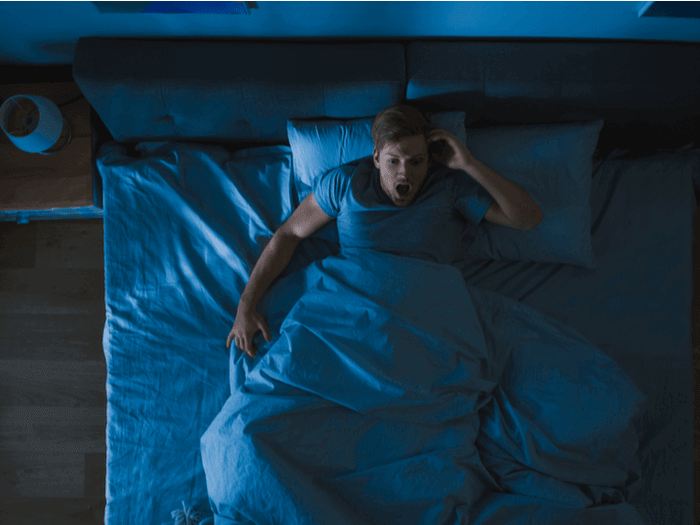 Falling, being chased, teeth falling out … nightmares can seriously ruin a good night’s sleep. But there are ways to beat them and get back to restful nights.

THE QUICK AND DIRTY

You’re being chased by a monster. It always seems to be just two steps behind. You run and run, your whole body on fire with fear, and you can’t shake your pursuer. Your teeth start rattling and falling out. Then, somehow you’re on stage, under a spotlight, and you realize you’re not wearing pants and everyone in the audience is staring at you.

Hopefully, you haven’t experienced any of those events in real life. But I wouldn’t be surprised to hear you’ve gone through at least one of these common themes in dreamland and woken up in a cold sweat with your heart pounding.

What are nightmares and who has them more often?

Nightmares are mysterious. Folklore from around the world has attributed nightmares to be demons, the souls of dead people who were wronged in life, and spirits with all sorts of malicious intent. Nowadays, although we haven’t fully solved the mystery of why nightmares exist and how they come about, we know that they're intense mental activity that happens mostly during rapid eye movement (REM) sleep. Usually, we experience nightmares as very vivid dreams that are terrifying or upsetting. And, naturally, they can disrupt our sleep and affect our mood.

Most of us are lucky and only have nightmares once in a while. But for about 2-5 percent of the population, they happen often or even nightly. Nightmares are much more common among girls and women than their male counterparts. Those who struggle with alcohol or drug addiction are also more likely to have frequent nightmares. People who have posttraumatic stress disorder (PTSD) or have experienced childhood abuse are also more at risk, and most have frequent nightmares.

But for some people, there seems to be no particular reason for persistent nightmares—instead, they have something called nightmare disorder. This is a disorder where you not only frequently have vivid and disturbing dreams, but also suffer major distress or impairment during the day such as anxiety, concentration problems, tiredness, and worry about going to sleep.

There is good news! Whether you have Nightmare Disorder, PTSD, or just more nightmares than you’d like, there are things you can do to decrease nightmares and regain a good relationship with sleep. Here’s what to do:

If you often have nightmares, you might be afraid of going to sleep. Who could blame you? That moment when our head hits the pillow might be relaxing and sweet for some, but for you, it’s like stepping into a horror movie—you don’t know when you’ll round a corner and see your worst, well, nightmare. So, perhaps you try to procrastinate about bedtime, keeping yourself awake as much as possible by watching yet another movie.

This will backfire and cause more nightmares. Depriving yourself of sleep leads to less rapid eye movement (REM) sleep, which is the stage of sleep where most dreaming happens. When the brain is deprived of REM, it brings REM back with a vengeance later in the night or on the next night. This is called a REM rebound effect—the brain gets into REM faster, stays there longer, and creates more intense dreams.

Perhaps you try to procrastinate about bedtime, keeping yourself awake as much as possible by watching yet another movie. This will backfire and cause more nightmares.

Something similar happens if you keep an irregular schedule, such as having a rotating shift job, or having a very different lifestyle on weekdays versus weekends. Your brain’s internal clock gets confused, and it can save up “REM propensity” that drives you straight into intense nightmares when you try to catch up on lost sleep.

So, even if it’s scary to go to bed, try your best to keep a steady sleep-wake schedule. Give yourself ample opportunity to sleep. It will be worth it once you establish a pattern.

2. Decrease alcohol intake and review your psychiatric and sleep medications with your doctor

Alcohol may seem very tempting for “quieting the mind,” since it makes you drowsy and might help you to pass out. However, it actually disrupts your sleep, keeping you in lighter stages and preventing you from entering the healing and restorative deep sleep stages.

Alcohol also tamps down on REM—drinking a lot is just like REM-depriving yourself. That leads to REM rebound and more opportunity for intense nightmares the next time you go to sleep. If someone frequently drinks, withdrawal from alcohol when they try to cut down on drinking also leads to more nightmares.

Alcohol disrupts your sleep, keeping you in lighter stages and preventing you from entering the healing and restorative deep sleep stages.

3. Wake up fully and be ready for a quick reality check

You’ve set yourself up with a regular sleep schedule, you’ve cut down on alcohol consumption, and you've checked with your doctor about your medications. You may still have nightmares, especially if they’re related to a traumatic event or if you’ve been having frequent nightmares for a long time. What should you do when they happen?

The first thing to do when you wake from a nightmare is to make sure you wake up all the way. Because the veil between awake and asleep can be thin, your brain might easily pass back and forth between the two in the middle of the night. If you don't wake fully, you could go right back to the nightmare you were having. This will reinforce the nightmare, making it seem more at home in your brain.

Don’t worry about disrupting your sleep by turning on the lights or getting out of bed. Simply waking up, even several times per night, is okay for your overall sleep health. It's also a much better alternative to keeping nightmares around. Pinch yourself, get out of bed, drink some water, give your partner or pet a cuddle—whatever you need to do to wake up fully and ground yourself in reality—before lying back down and closing your eyes.

4. Rewrite the ending and rehearse the new script

One of the most widely used and evidence-based treatments for nightmares, whether they’re caused by PTSD or not, is imagery rehearsal therapy (IRT). This therapy has a very simple premise—having nightmares is a learned behavior for the brain, which means it's possible to unlearn.

In other words, your brain has gotten into the habit of creating nightmares, and the more it does so, the easier it is for it to keep going. It’s like driving a car on a muddy road that has deep ruts in it—the more you drive in the ruts, the deeper the ruts get, and the harder it is to get out of those ruts.

Nightmaring is a learned behavior for the brain, which means it's possible to unlearn.

Imagery rehearsal therapy’s goal is to help steer the car out of those ruts. In other words, you want to give your brain an alternative path that leads not to the nightmare, but another story. You can give your brain that alternative story by making it up and then telling it and retelling it to yourself.

Take a recurrent nightmare, or a recurrent theme, and write about it in as much detail as you can. This can be hard to do, but don’t flinch away—you’ve got to put your brain in the scene before you can change it. Take one element of the nightmare you’ve written about and change it. You can make the monster evaporate into thin air, make a magical escape door, arm yourself with a magic wand you can use to wave anything away, give yourself the power to snap your fingers and freeze the scene … use your imagination! After all, this dream is playing in your mind, and you're the boss here.

During the daylight hours, give yourself uninterrupted time to rehearse the dream and the alternate ending in your mind. Do this every day, picturing it with as much vivid detail as possible. With a few days' or weeks' practice, you may have fewer nightmares, or they might at least be less scary.

5. Seek treatment for PTSD and other mental health needs

Taking care of your sleep health means taking care of your whole health. Nightmares often happen due to having PTSD or another psychiatric condition, and successfully treating those conditions can often decrease nightmares. Not only that, but treating PTSD will improve your daytime too, allowing you to have less anxiety, better relationships, and the room to be yourself fully.

There are excellent, evidence-based treatments for PTSD, such as cognitive processing therapy, which uses an evidence-based, step-by-step approach to help you learn about how PTSD has impacted you, pinpoint the “stuck points” that keep you mired, and learn strategies for finding balance.

But if you’re not yet able to start working directly on PTSD, that doesn’t mean you have to wait to tackle nightmares. Research has shown that for people with PTSD-related nightmares, a few sessions of imagery rehearsal therapy can decrease nightmares even without directly targeting PTSD symptoms. In fact, just improving the nightmares could take PTSD down a notch overall.

Go ahead and take care of yourself both during the day and the night. Your brain is always working hard, and sometimes it needs a little extra help to relax at night instead of playing horror movies. Remember that nightmares are not totally outside of your control—you can use the above strategies to set yourself up for sweet dreams instead.

Kanye West declares he will run for US president in 2020 Rapper uses Independence Day to make announcement, but…