A History of the Palace of Versailles, Jewel of the Sun King 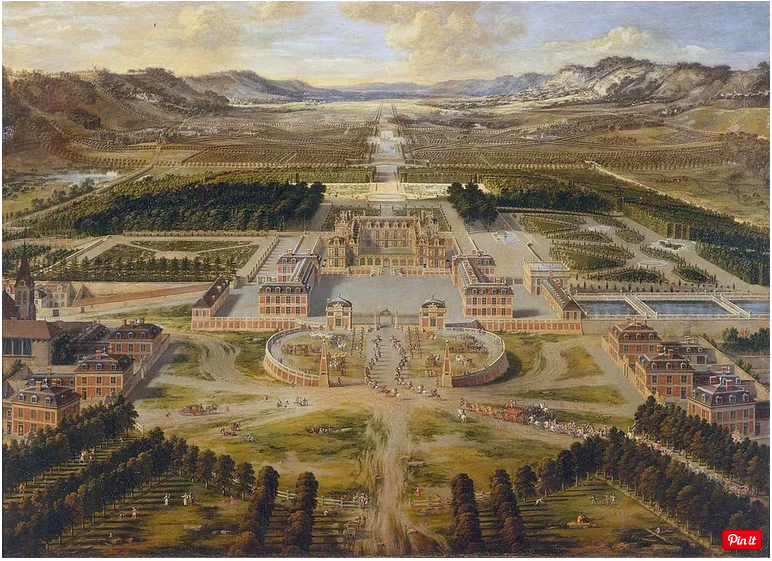 Beginning as a humble hunting lodge, the Palace of Versailles grew to encompass the permanent residence of the French monarchy and the seat of political power in France. The royal family was forcibly removed from the palace at the onset of the French Revolution, though subsequent political leaders, including Napoleon and the Bourbon kings, spent time in the palace before it was transformed into a public museum.

The Palace of Versailles was originally constructed in 1624 as a simple, two-story hunting lodge. King Louis XIV, the Sun King, spent nearly 50 years expanding the palace, and in1682, he moved both the royal residence and French seat of government to Versailles.
The French central government remained in Versailles until the beginning of the French Revolution, when Marie-Antoinette and King Louis XVI were forced from the estate.
In 1837, the estate was refurbished and inaugurated as a museum. Today, more than 10 million people visit the Palace of Versailles annually.

Though the main function of the contemporary Palace of Versailles is as a museum, it also plays host to important political and social events throughout the year, including presidential addresses, state dinners, and concerts.

In 1624, King Louis XIII ordered the construction of a simple, two-story hunting lodge in dense woodlands about 12 miles outside of Paris. By 1634, the simple lodge had been replaced by a more regal stone and brick chateau, though it still maintained its purpose as a hunting lodge until King Louis XIV took the throne.

Louis XIII died in 1643, leaving the monarchy in the hands of the four-year-old Louis XIV. When he came of age, Louis began work on the family hunting lodge, ordered the addition of kitchens, stables, gardens, and residential apartments. By 1677, Louis XIV had begun to lay the foundation for a more permanent move, and in 1682, he transferred both the royal residence and the French government to Versailles. 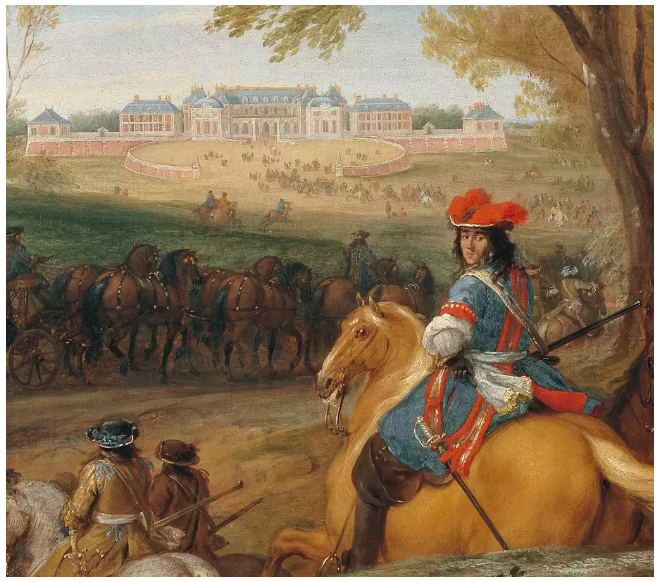 King Louis XIV, pictured here arriving at Versailles, commissioned most of the expansion on Versailles during his 72-year reign.
(Iamge: adoc-photos / Getty Images)

By removing government from Paris, Louis XIV solidified his omnipotent power as a monarch. From this point forward, all gatherings of nobility, courtiers, and government officials happened under the watchful eye of the Sun King in his Palace of Versailles.

King Louis XIV’s 72-year reign, the longest of any European monarch, afforded him the ability to spend more than 50 years adding to and renovating the chateau at Versailles, where he died at the age of 76. Below are the elements of the Palace of Versailles that were added during the reign of King Louis XIV.

Built as the private residence for the king within the Palace of Versailles, the king's apartments featured gold and marble detailing as well as Greek and Roman artwork intended to represent the king’s divinity. In 1701, King Louis XIV moved his bedchamber to the centermost point of the royal apartments, making his room the focal point of the palace. He died in this room in 1715. 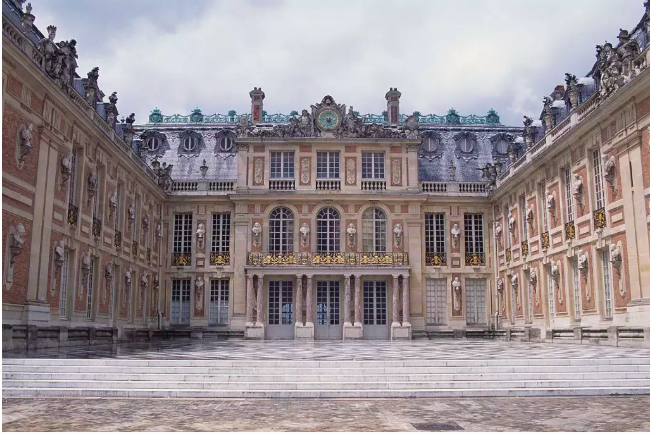 King Louis XIV moved his bedchamber, making it the focal point of the palace both inside and out. Pictured here is the outside of the king’s bedchamber, flanked by two wings of the Palace of Versailles.
(Image: Jacques Morell / Getty Images)

The first queen to reside in these apartments was Maria Theresa, wife of King Louis XIV, but she died in 1683 soon after arriving in Versailles. The apartments were later dramatically altered first by King Louis XIV, who annexed several rooms in the palace to create his royal bedchamber, and later by Marie-Antoinette.

The Hall of Mirrors is the central gallery of the Palace of Versailles, named for 17 ornate arches fitted with 21 mirrors each. These mirrors reflect the 17 arched windows that look out onto the dramatic gardens of Versailles. The Hall of Mirrors represents the enormous wealth of the French monarchy, as mirrors were among the most expensive belongings during the 17th century. The hall was originally constructed of two lateral enclosed wings, linked by an open-air terrace, in the style of an Italian baroque villa. However, the temperamental French climate made the terrace impractical, so it was swiftly replaced by the enclosed Hall of Mirrors. 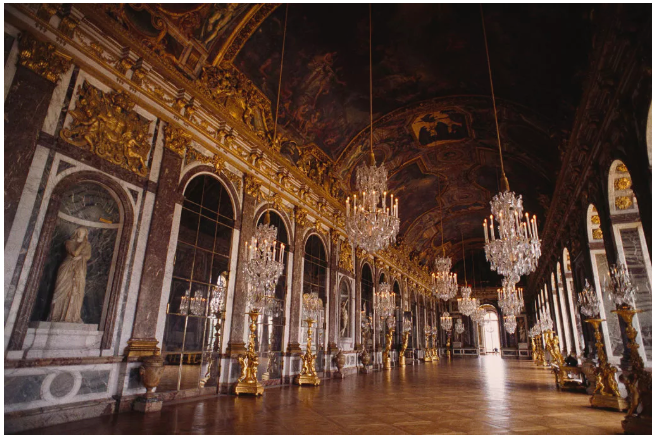 The royal stables are two symmetrical structures built directly across from the palace, indicating the importance of horses at the time. The great stables housed the horses used by the king, the royal family, and the military, while the small stables housed coach horses and the coaches themselves. 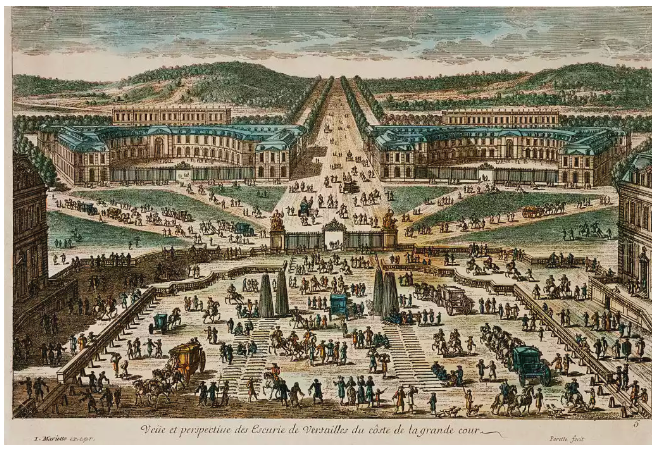 The Grand and Small Stables, named for purpose rather than size, are visible on the left and right sides of this illustration.
(Image: Hulton Deutsch / Getty Images)

The King’s State Apartments were rooms used for ceremonial purposes and social gatherings. Though they were all built in the Italian baroque style, each bears the name of a different Greek god or goddess: Hercules, Venus, Diana, Mars, Mercury, and Apollo. The only exception is the Hall of Plenty, where visitors could find refreshments. The final room to be added to these apartments, the Hercules Room, served as a religious chapel until 1710, when the Royal Chapel was added.

The final structure of the Palace of Versailles commissioned by Louis XIV was the Royal Chapel. Biblical illustrations and statues line the walls, drawing the worshipers’ eyes toward the altar, which features a relief depicting the death and resurrection of Jesus Christ. 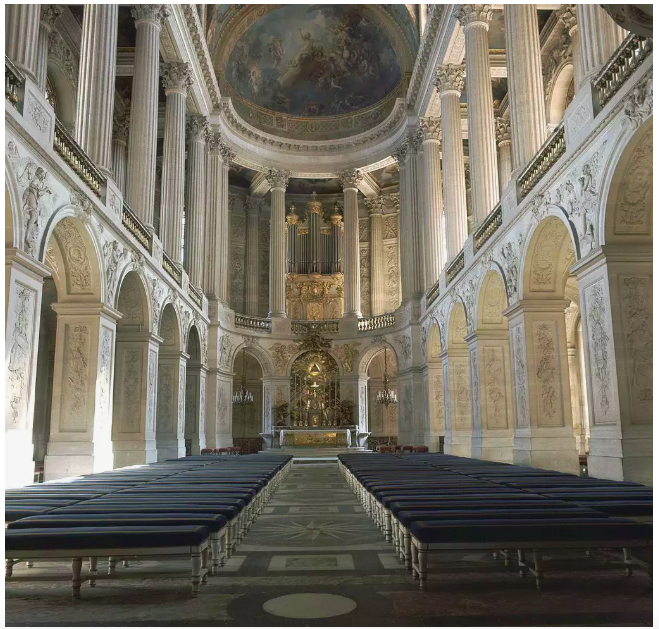 The Grand Trianon was built as a summer residence where the royal family could take refuge from the ever-expanding court at Versailles. 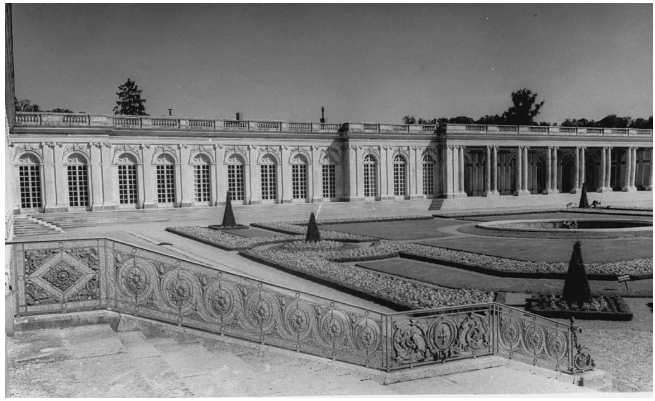 The Grand Trianon is only a single story to emphasize the connection with the gardens.
(Image: Hans Wild / Getty Images)

The Gardens of Versailles include a promenade that faces east to west, following the path of the sun in honor of the Sun King. A network of paths open to pavilions, fountains, statues, and an orangery. Because the expansive gardens could be overwhelming, Louis XIV would often lead tours of the area, showing courtiers and friends where to stop and what to admire. 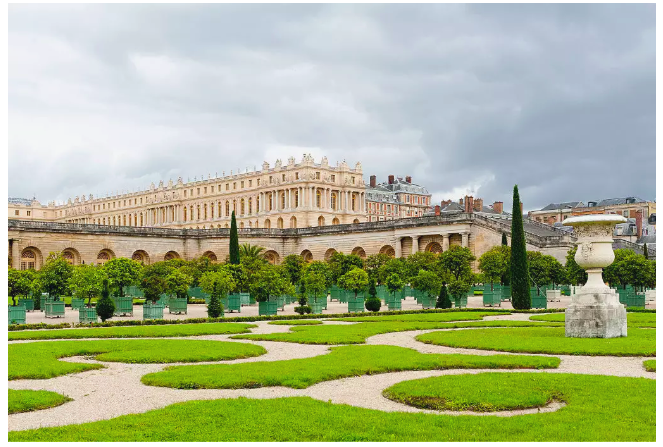 Continued Construction and Governance in Versailles 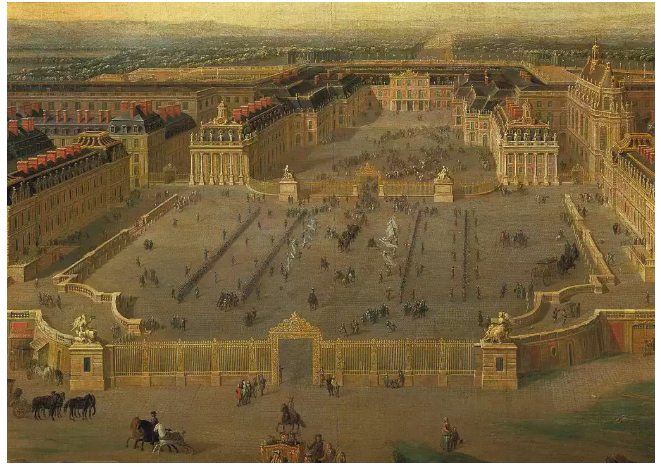 "View of the Chateau of Versailles seen from the Place d’armes in 1722” by Pierre-Denis Martin. (Image: Adoc-photos / Getty Images)

King Louis XV, great-grandson of Louis XIV, assumed the French throne at the age of five. Known as commonly as Louis the Beloved, the king was a strong proponent of Enlightenment ideas, including science and the arts. The additions he made to the Palace of Versailles reflect these interests.

The King’s and Queen’s Private Apartments (1738)

Allowing for more privacy and comfort, the King’s and Queen’s Private Apartments were truncated versions of the original royal apartments, featuring low ceilings and undecorated walls.

The Royal Opera is constructed in an ovular shape, ensuring that all in attendance can see the stage. Additionally, the wooden structure gives the acoustics a soft but clearly audible violin-like sound. The Royal Opera is the largest surviving court opera house. 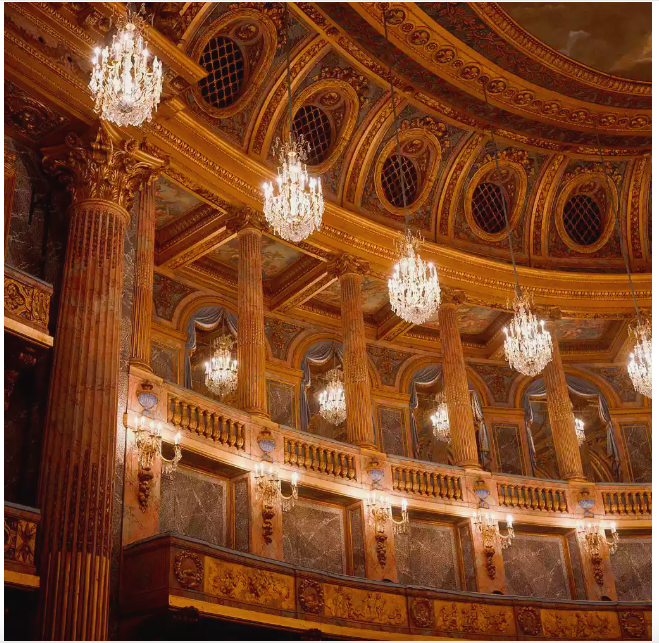 The wooden elements in the Royal Opera give the acoustics a violin-like sound.
(Image: Paul Almasy / Getty Images)

Petite trianon was commissioned by Louis XV for his mistress, Madame de Pompadour, who did not live to see it completed. It was later gifted by Louis XVI to Marie-Antoinette. 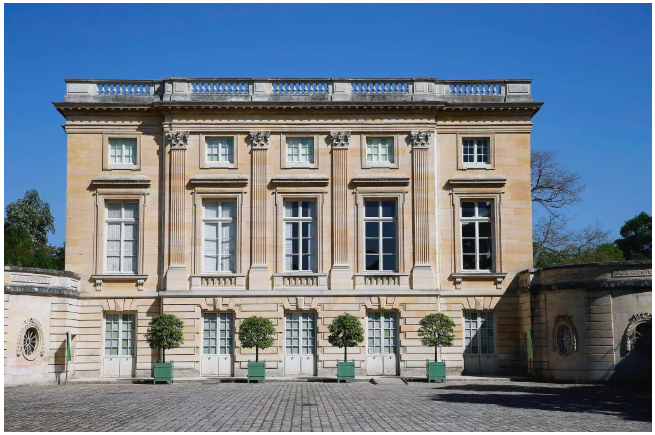 Louis XVI ascended to the throne after the death of his grandfather in 1774, though the new king had little interest in governance. Patronage to Versailles by courtiers dropped off quickly, fueling the flames of the budding revolution. In 1789, Marie-Antoinette was in the Petite Trianon when she learned of the mob storming Versailles. Both Marie-Antoinette and King Louis XVI were removed from Versailles and guillotined in the subsequent years.

Marie-Antoinette altered the appearance of the queen’s apartments several times during her reign. Most notably, she ordered the construction of a rustic village, The Hamlet of Versailles, complete with a functioning farm and Norman-style cottages. 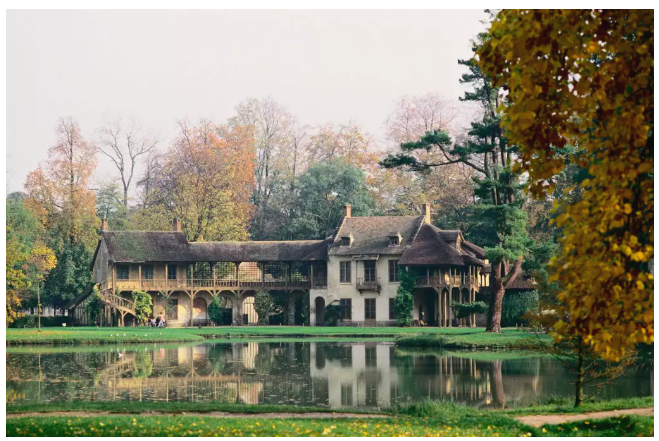 Marie-Antoinette’s Hamlet featured Norman-style cottages, including one for her exclusive use.
(Image: Heritage Images / Getty Images)

After King Louis XVI was guillotined, the Palace of Versailles was forgotten for almost a decade. Most of the furniture was either stolen or sold at auction, though many of the paintings were preserved and brought to the Louvre.

In 1804, Napoleon Bonaparte was coronated as the first emperor of France, and he immediately began the process of moving the government back to Versailles. His time at Versailles was short, however. After his defeat at the Battle of Waterloo in 1815, Napoleon was removed from power.

After Napoleon, Versailles was relatively forgotten. It wasn’t until the Revolution of 1830 and the July Monarchy that Versailles received significant attention. Louis-Philippe commissioned the creation of a museum at Versailles to unite the people of France. On his order, the prince’s apartments were destroyed, replaced by portrait galleries. Below are the additions made by Louis-Philippe to the Palace of Versailles.

A portrait gallery made from the demolition of some of the royal apartments, the Gallery of Great Battles features 30 paintings that depict centuries of military success in France, beginning with Clovis and ending with Napoleon. It is considered to be the most important addition by Louis-Philippe to the Palace of Versailles. 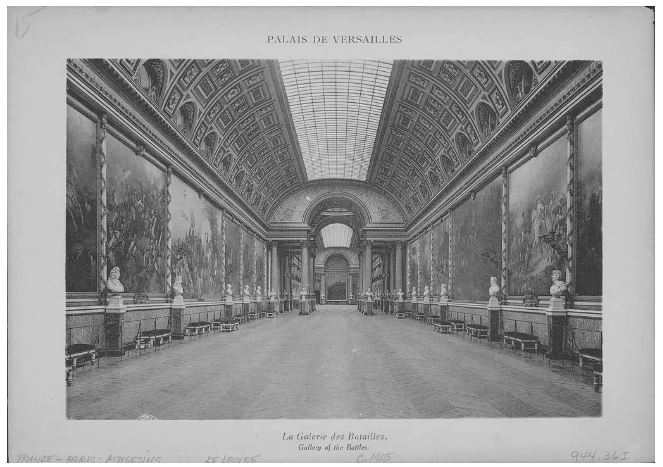 The Crusades Rooms were created with the sole intention of appeasing the nobility of France. Paintings depicting France’s involvement in the Crusades, including the arrival of troops in Constantinople, hang from the walls, and the entrance is marked by the Rhodes Door, a 16th century cedar gift from Sultan Mahmud II of the Ottoman Empire.

The famous painting “The Coronation of Napoleon,” which hangs in the Louvre, inspired the Coronation Room. Napoleon never spent much time at Versailles, but much of the museum is dedicated to Napoleonic art, owing to Louis-Philippe’s nostalgia for the Napoleonic era.

The Congress Chamber was constructed to house the new National Assembly and Congress, a reminder of the governmental power once held at Versailles. In a contemporary context, it is used for addresses by the president and to adopt amendments to the constitution. 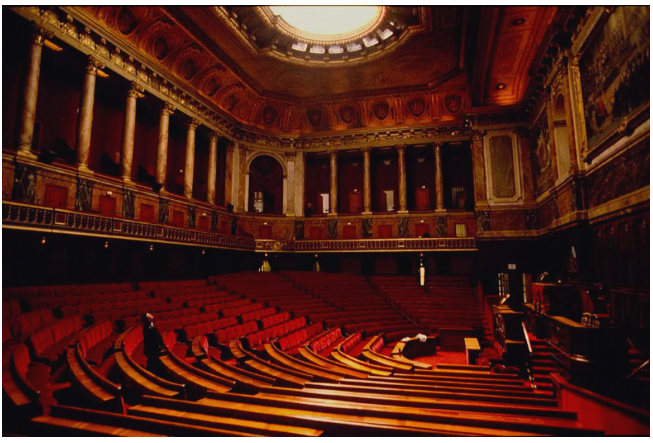 Renovations in the 20th century by Pierre de Nolhac and Gerald Van der Kemp sought to revive the estate. They dismantled many of the galleries established by Louis-Philippe, rebuilding the royal apartments in their place, and used historical records to design and decorate the estate in the styles of the monarchs who had once resided there.

As one of the most frequented attractions in the world, millions of tourists come to the Palace of Versailles annually to see the 120 galleries, 120 residential rooms, and nearly 2,000 acres of gardens. Over the centuries, much of the art and furniture that was stolen or auctioned off has been returned to the palace.

Versailles today is used to house symbolic meetings of Congress, state dinners, concerts, and other political and social gatherings.

Sign of the times: Can hugging machines solve the touch crisis? By MOLLY HANSON As the American loneliness epidemic…