The Life of Gertrude Bell, English Explorer in Iraq

Gertrude Bell (July 14, 1868 – July 12, 1926) was a British writer, politician, and archaeologist whose knowledge and travels in the Middle East made her a valuable and influential person in British administration of the region. Unlike many of her countrymen, she was regarded with considerable respect by the locals in Iraq, Jordan, and other countries. 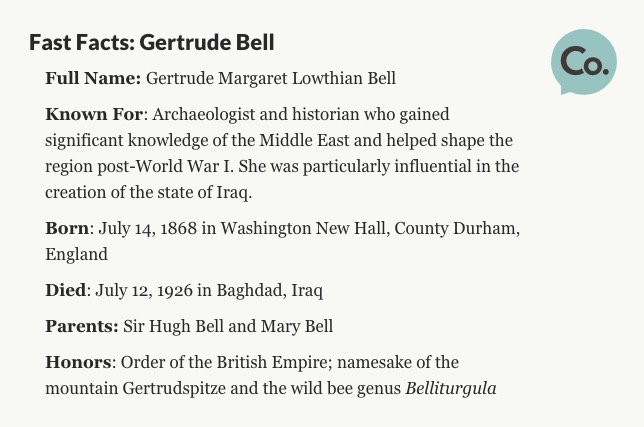 Gertrude Bell was born in Washington, England, in the northeastern county of Durham. Her father was Sir Hugh Bell, a baronet who was a sheriff and a justice of the peace before joining the family manufacturing firm, Bell Brothers, and gaining a reputation for being a progressive and caring boss. Her mother, Mary Shield Bell, died giving birth to a son, Maurice, when Bell was only three years old. Sir Hugh remarried four years later to Florence Olliffe. Bell’s family was wealthy and influential; her grandfather was ironmaster and politician Sir Isaac Lowthian Bell.

A playwright and children’s author, her stepmother was a major influence on Bell's early life. She taught Bell etiquette and decorum, but also encouraged her intellectual curiosity and social responsibility. Bell was well-educated, first attending Queen’s College, then Lady Margaret Hall at Oxford University. Despite the limitations placed on female students, Bell graduated with first-class honors in just two years, becoming one of the first two Oxford women to achieve those honors with a modern history degree (the other was her classmate Alice Greenwood).

After completing her degree, in 1892, Bell began her travels, first heading to Persia to visit her uncle, Sir Frank Lascelles, who was a minister at the embassy there. Only two years later, she published her first book, Persian Pictures, describing these travels. For Bell, this was only the beginning of over a decade of extensive travel.

Bell quickly became a bonafide adventurer, going mountaineering in Switzerland and developing fluency in several languages, including French, German, Persian, and Arabic (plus proficiency in Italian and Turkish). She developed a passion for archaeology and continued her interest in modern history and peoples. In 1899, she returned to the Middle East, visiting Palestine and Syria and stopping in the historic cities of Jerusalem and Damascus. In the course of her travels, she began to become acquainted with the people living in the region.

In addition to simply traveling, Bell continued some of her more daring expeditions. She climbed Mont Blanc, the highest peak in the Alps, and even had one peak, the Gertrudspitze, named after her in 1901. She also spent considerable time in the Arabian Peninsula over the course of more than a decade. 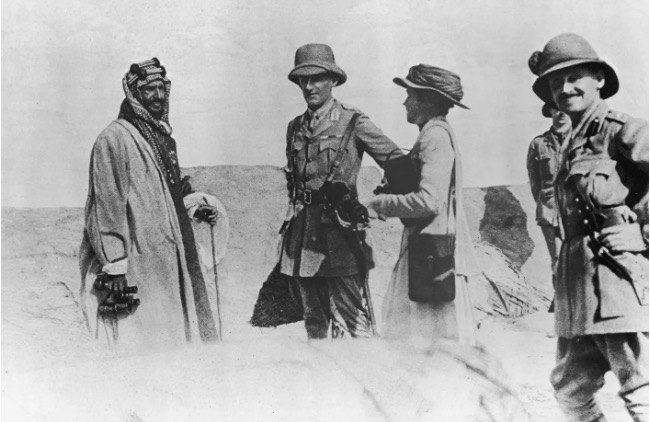 Bell never married or had any children, and only had a few known romantic attachments. After meeting the administrator Sir Frank Swettenham on a visit to Singapore, she kept up a correspondence with him, despite their 18-year age gap. They had a brief affair in 1904 after his return to England. More significantly, she exchanged passionate love letters from 1913 until 1915 with Lieutenant Colonel Charles Doughty-Wylie, an army officer who was already married. Their affair remained unconsummated, and after his death in action in 1915, she had no other known romances.

Archaeologist in the Middle East

In 1907, Bell began working with archaeologist and scholar Sir William M. Ramsay. They worked on excavations in modern-day Turkey, as well as the discovery of a field of ancient ruins in the north of Syria. Two years later, she shifted her focus to Mesopotamia, visiting and studying the ruins of ancient cities. In 1913, she became only the second foreign woman to journey to Ha’li, a notoriously unstable and dangerous city in Saudi Arabia.

When World War I broke out, Bell tried to obtain a posting in the Middle East but was denied; instead, she volunteered with the Red Cross. However, British intelligence was soon in need of her expertise in the region to get soldiers through the desert. During her expeditions, she forged close relationships with locals and tribe leaders. Starting from there, Bell gained remarkable influence in shaping British policy in the area.

Bell became the sole female political officer in the British forces and was sent to areas where her expertise was needed. During this time, she also witnessed the horrors of the Armenian genocide and wrote about it in her reports of the time. 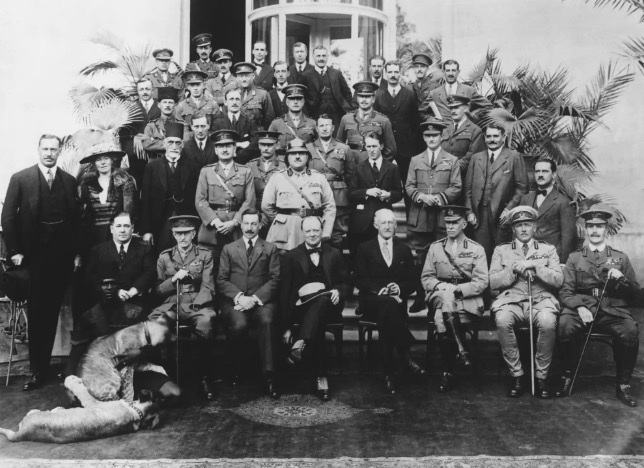 The delegates of the Mespot Commission at the Cairo Conference. The group was set up by Colonial Secretary Winston Churchill to discuss the future of Arab nations. Gertrude Bell on the left, second row. Corbis Historical / Getty Images

After British forces captured Baghdad in 1917, Bell was given the title of Oriental Secretary and ordered to assist in the restructuring of the area that had previously been the Ottoman Empire. In particular, her focus was the new creation of Iraq. In her report, “Self Determination in Mesopotamia,” she laid out her ideas about how the new leadership should work, based on her experience in the region and with its people. Unfortunately, the British commissioner, Arnold Wilson, believed that the Arab government needed to be overseen by British officials who would hold the final power, and many of Bell’s recommendations were not implemented.

Bell continued on as Oriental Secretary, which in practice meant liaising between the various different factions and interests. At the Cairo Conference of 1921, she was critical in discussions on Iraqi leadership. She advocated for Faisal bin Hussein to be named the first King of Iraq, and when he was installed in the post, she advised him on a wide variety of political matters and supervised the selection of his cabinet and other positions. She gained the moniker "al-Khatun" among the Arab population, signifying a “Lady of the Court” who observes to serve the state.

Bell also participated in the drawing of borders in the Middle East; her reports from that time proved to be prescient, as she remarked on the likelihood that none of the possible borders and divisions would satisfy all factions and keep long-term peace. Her close relationship with King Faisal also resulted in the founding of the Iraqi Archaeological Museum and an Iraq base of the British School of Archaeology. Bell personally brought artifacts from her own collection and supervised excavations as well. Over the next few years, she remained a key part of the new Iraqi administration.

Bell’s workload, combined with the desert heat and a slew of illnesses, took its toll on her health. She suffered from recurrent bronchitis and began losing weight rapidly. In 1925, she returned to England only to face a new set of problems. Her family’s wealth, made mostly in industry, was in rapid decline, thanks to the combined effects of industrial worker strikes and economic depression across Europe. She became ill with pleurisy and, almost immediately after, her brother Hugh died of typhoid fever.

On the morning of July 12, 1926, her maid discovered her dead, apparently of an overdose of sleeping pills. It was unclear if the overdose was accidental or not. She was buried at the British cemetery in the Bab al-Sharji district in Baghdad. In the tributes following her death, she was praised for both her achievements and her personality by her British colleagues, and she was posthumously awarded the Order of the British Empire. Among the Arabic communities she worked with, it was noted that “she was one of the few representatives of His Majesty's Government remembered by the Arabs with anything resembling affection.”

Why Does Your Cat Eat Grass? Many of us spend our lives in loyal servitude to them, but cats…