The perceived attractiveness of larger eyes has led to a growing trend (especially in Asia) of women using cosmetics and contact lenses with larger limbal rings in an attempt to create the illusion of larger eyes. Many have even done this permanently through cosmetic surgery.

There seems to be two separate reasons which attempt to address the question. The first is that larger eyes (along with fuller lips, bigger breasts and smaller chins) are a sign of higher levels of estrogen. Women that have higher levels of estrogen will be more successful and have an easier time conceiving than women with lower levels. This means that women with larger eyes will be seen as a better ‘mate’.

The second reason is that large eyes are a neotenous feature. 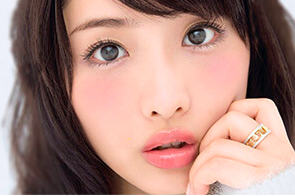 Since human eyes do not grow in size during its development relative to the rest of the body, the size of the eye relative to the face decreases as we grow. This means that babies have larger eyes compared to older children and adults. As a consequence, people who have large eyes are often perceived to be younger than they really are. Since perceived youth of a mate is also a sign of fertility, men tend to prefer women with neotenous features, like large eyes.

However, this isn’t saying that men want to mate with babies and small children – that would be incredibly maladaptive because they are not fecund (fertile). So, then, why do males usually prefer women who, in essence, look like babies?

It’s thanks to something that happens in evolution called Fisherian runaway selection. Fisherian selection suggests that, when one sex prefers mates with certain genetic traits, then, through the process of sexual selection, the other sex will come to possess the trait in increasingly exaggerated forms.

Large Asian eyesThe process is called “runaway” because over time, it would cause the development of greater preference and more pronounced traits, until the costs of producing the trait balance the reproductive benefit of possessing it. The peacock’s tail is a perfect example of this. Its tail requires a great deal of energy to grow and maintain, it reduces the bird’s agility, and increases the animal’s visibility to predators. Yet, it has evolved which indicates that peacocks with longer tails have some advantage.

This same process occurs with men’s preference for women with neotenous features.