Why were so many prehistoric animals so big? 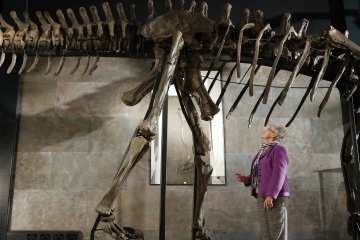 The Diplodocus longus could grow up to 92 feet in length but weighed only about 15 tons.

The reason why so many prehistoric animals — mastodons, mammoths (whose name means "huge") and many dinosaurs — were so big is something of a mystery. For a long time, environmental factors such as higher oxygen content in the air and greater land masses (i.e., more space) were thought to contribute to their large size. Cope's Rule, which says that as animals evolve over time they get larger, was another generally accepted explanation. People thought that prehistoric animals evolved during the thousands of years between mass extinctions, growing larger as time passed. When the next mass extinction occurred, the huge animals were wiped out and new, smaller animals took their place, growing larger until the next extinction.

Cope's Rule also explained why we don't have enormous land animals today, at least by prehistoric standards. It has been 66 million years since the last mass extinction -- the Cretaceous mass extinction, which wiped out the dinosaurs. That's not long enough in evolutionary terms and under Cope's Rule for creatures to become enormous.

More recent fossil studies, however, have cast doubt on both theories. These studies show that dinosaurs of various sizes existed at the same time. And in some cases, they grew smaller rather than larger over time.

Based on this evidence, a newer explanation has emerged for why there were so many huge dinosaurs. It points to the physiology of their bones and lungs, which were similar to those of birds. The largest dinosaur, the long-necked Supersaurus, is thought to have weighed 45 tons, about as much as seven African elephants. They had air pockets in their bones, which lightened their weight and kept them from collapsing as they grew larger. They also had very efficient lungs, so their respiration and heat exchange could better support the larger size. The fact that they laid eggs and could reproduce relatively quickly may have given the bigger animals a reproductive advantage as well.

Enormous animals were not only the province of prehistory, though, and the fact that the Supersaurus was a land animal keeps it from being the largest animal ever to live on our planet. In fact, the largest animal we know of lives today. The blue whale makes the 45-ton Supersaurus seem like a weakling. Blue whales are estimated to be 89 to 98 feet long (it's difficult to measure such a huge creature under water) and can weigh up to 150 tons. Their water-logged existence, which increases their buoyancy, makes it possible for them to weigh three times what the Supersaurus weighed without their bodies collapsing.

You Should Salt Your Summer Beverages By A.A. Newton One of summer's greatest pleasures is sipping an icy,…

By Breena Kerr Maybe not to have the word “man” in their word anymore! Margaret Riegel “Our organizing group…