Research shows that a molecule in the peppers activates your cells’ touch receptors, making them feel like they’ve been rapidly vibrated 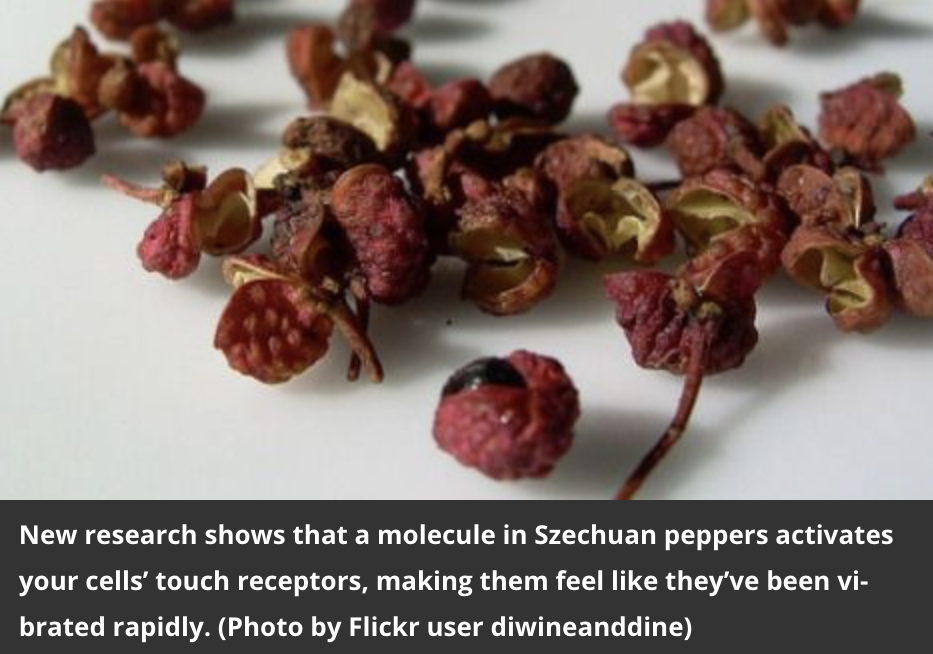 If, in the midst of a Szechuan pepper-heavy meal, you have the presence of mind to ignore the searing hot pain that fills your mouth, you might notice a more subtle effect of eating the hot peppers: a tingling, numbing sensation that envelops your lips and tongue.

What’s behind this strange phenomenon, scientifically known as paresthesia? Scientists believe that it has something to do with a molecule called hydroxy-alpha-sanshool, naturally present in the peppers.

Research has shown that the molecule interacts with our cell’s receptors differently than capsaicin, the active ingredient in the world’s hottest chili peppers. Capsaicin produces a pure burning sensation by binding to the same sorts of receptors present in our cells that are activated when we’re burned by excessive heat, but the Szechuan peppers’ active chemical appears to act on separate receptors as well, perhaps accounting for the distinctive tingling that can persist for minutes after the burn has gone away.

Now, in a study that required some uncommonly compliant volunteers—they let their lips get brushed with ground Szechuan pepper—researchers found that the peppers produce the tingle by exciting tactile sensors in our lips and mouth. In other words, it seems that apart from tasting the peppers’ spiciness, we feel it too, as though our lips are being physically touched by the chemicals present in the Szechuans.

As part of the study, published today in the Proceedings of the Royal Society B, a group of neuroscientists from University College London gathered 28 people and subjected them to ground Szechuans and small metal vibrating tools. Initially, they ground up the peppers, mixed them with ethanol and water, and brushed them onto the lips of the participants, who reported the level of tingling they felt.

Then, to try figuring the exact frequency of the tingling—a concept that becomes a bit more intuitive if you think of the tingling, or numbness, as the lips being vibrated quickly—they held a small vibrating tool up to the volunteers’ fingers. They could control how fast or slow the tool vibrated, and were asked to set it so that it matched the same feeling as the tingling on their lips. After the Szechuan tingling had time to die down, the vibrating tools were placed on their lips in the same spot, and again the participants could control the vibrating to make it resemble the pepper numbness as closely as possible.

When they looked at the records of the tool’s frequency, they found that the participants consistently set it to vibrate at 50 hertz (another way of saying 50 cycles per second). This consistency across people was telling—specific classes of tactile receptors in our cells are each activated by different frequencies (when touched, they pass along an electric current through nerve fibers, ultimately signaling to the brain that physical contact has occurred), so it supported the idea that touch receptors were involved. Which class of receptor, though, is activated by Szechuan peppers?

The scientists say that frequency of the Szechuan’s numbing sensation fell within the range of vibration typically conveyed by a highly-sensitive type of tactile receptor called Meissner receptors, which cover around 10-80 hertz. Previous work has shown that in human nerve cells cultured in petri dishes, the sanshool molecule caused fibers associated with Meissner receptors to fire, passing along a burst of electricity.

This experiment showed that in the real world, the Szechuans’ active ingredient seems to do the same thing, triggering activity in this set of receptors and causing them to pass along tactile stimuli towards the brain, thereby making our lips feel numb, as though they’ve been vibrated quickly. It’s a strange idea, but not unlike the feeling of spiciness: When you eat the pepper, you’re not actually being burned, but your heat-sensitive receptors are being activated, making it seem that way. In the same way, if you’re daring enough to bite into a Szechuan, the touch receptors in your lips and mouth will be stimulated, and as a result, they’ll go numb in a few minutes.

Why do we wake up before the alarm goes off? One of life’s great irritants is waking up…