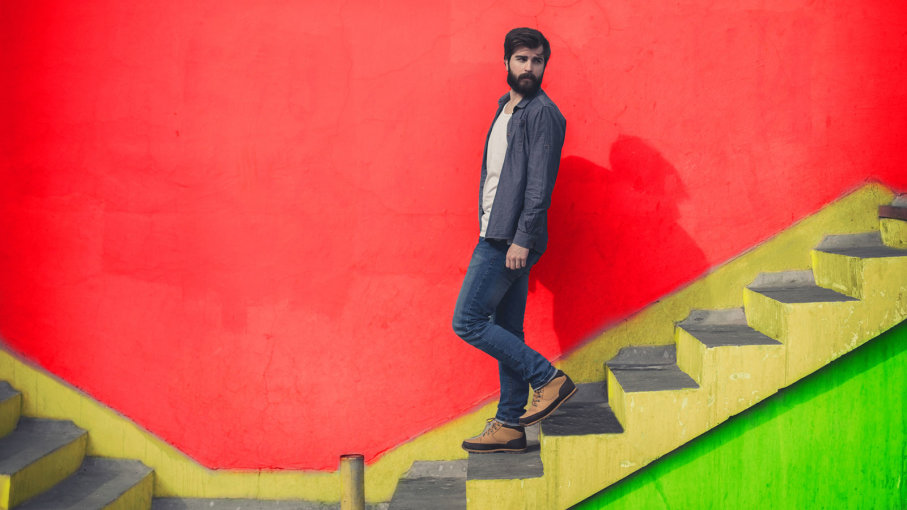 Why are we so attuned to other people's noises but not our own? DOMOYEGA/GETTY IMAGES

You're walking down a deserted street and suddenly you hear footsteps. Someone might be following you, you think. Because, although the street is quiet, your own footsteps would never register with you — just those of a stranger's. So why is it we can't hear the noises we make ourselves?

Scientists have long known that we are capable of tuning out our own personal noises, but were previously in the dark about how the brain accomplishes this feat, exactly. The results of a new study, published in the journal Nature, aims to amp up our understanding of this phenomenon by focusing on footsteps.

"We wanted to understand how the individual cells in our brains — our neurons — work together to make that happen," lead researcher Dr. David Schneider, an assistant professor with the Center for Neural Science at New York University (NYU), explains in an email. "To do that, we studied mouse brains. And we built an augmented reality system so that when mice ran, we could experimentally control the sounds they heard. We could give them a couple of days with their walking making one sound, then we could unexpectedly switch the sound."

Research was conducted at Duke University's School of Medicine. The scientists soon discovered that when the mice expected their walking to sound a particular way, the neurons in the auditory cortex (one of the main hearing centers of the brain) stopped responding to the noise.

"It was almost like they were wearing special headphones that could filter out the sound of their own movements," Schneider explains. "In contrast, when we played an unexpected sound, neurons in their auditory cortex had large responses."

The scientists soon realized that, as the mice were becoming familiar with the sounds of their own walking, there were some important connections being changed between the auditory cortex and the motor cortex, which is the part of the brain responsible for moving.

"The connections strengthen onto inhibitory neurons in the auditory cortex that are active when the mouse heard the footstep sound," Schneider says. "The end result was that every time the mouse walked, a group of inhibitory neurons were active to create a photo-negative of the sound the mouse expected, which could cancel out the expected sound when it was heard."

The experience isn't limited to footsteps, either. "The heavy breather rarely knows that they're a heavy breather, because it doesn't sound as loud to them! And I think the same is true of keystrokes," Schneider adds. "Sure I can hear my own keystrokes when I'm typing, but I don't usually get annoyed by them. But if someone sitting next to me is typing heavily it drives me batty."

For any creature accustomed to being hunted, like mice, this ability to filter out one's own innocuous noises and focus on the more potentially dangerous ones is critical. This is also the same phenomenon at play when we sing, speak or play music.

"We usually have an idea in our head for what sound we'd like to produce. When I sit down at the piano and strike the keys for example, I know what music I want it to make. But when we're practicing, we often get it wrong," Schneider says. "The mechanism that we've described in this paper — the ability to ignore the expected consequences of our movement — gives us the extra-cool ability to detect when we've got it wrong. So if I play the piano just right, I hear it, sure, but my auditory cortex is pretty silent. But when I play it wrong, I get a much larger response."

As a result, Schneider says, the brain is able to interpret that response as, "Hey, that didn't sound right, maybe I should move my fingers a little different next time."

"And that allows us to learn from our mistakes," he says, noting that they're still trying to figure out exactly how such error signals are employed by the brain when learning language and music skills.

The researchers hope to use this information to shed light on a couple of different areas next. For example, it's possible that the same brain circuits involved in ignoring and/or detecting sounds malfunction in patients with diseases like schizophrenia.

"People suffering from schizophrenia often vividly experience phantom voices that aren't actually there," Schneider says. "It's been suggested that these hallucinations may be due to altered connectivity between motor and hearing centers of the brain, and we think the brain circuitry we've identified might be involved. So we'd like to study mice who have similar genetic mutations to those that are associated with schizophrenia in humans."

Cats Do Have Facial Expressions, We're Just Bad at Reading Them, Study Shows KARIN BRULLIARD, THE WASHINGTON POST We…