American Mukbang: Why We Love to Watch People Eat 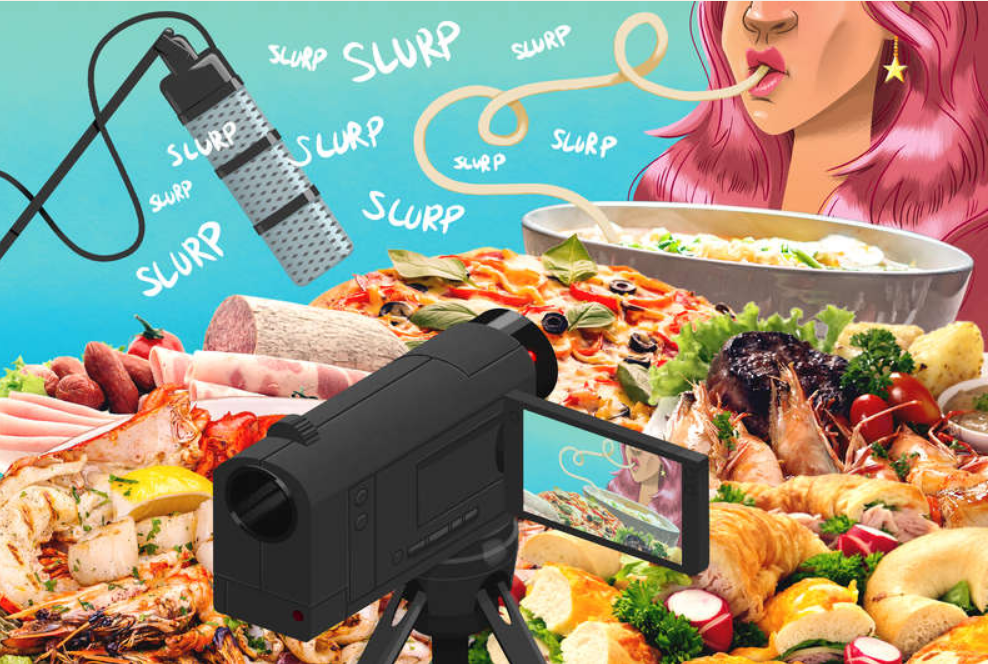 Bethany Gaskin, aka Blove, sits in front of the screen with a wide smile on her face, casually chatting with her audience as she indulges in a fresh Cajun seafood boil. You can hear the cracking sound of the hard shell crab legs breaking as Blove extracts the delectable, juicy crab meat. Her loyal fanbase of over one million viewers loves watching her eat, but they also enjoy her funny running commentary.

Within recent years, food obsessives have turned to a new video genre taking over YouTube. It’s launched personalities with hundreds of thousands, even millions of followers. This is mukbang.

The word mukbang is a mash-up of the Korean words “muk-ja” (let’s eat) and “bang-song” (broadcast). If you’re unfamiliar with the video genre, it’s (often) live footage of a host eating copious amounts of food in front of a camera while interacting with their audience. The trend originated in South Korea, where the videos became popular via live stream channels like Afreeca TV and Twitch.

It was virtually unheard of in the United States until 2015, when Fine Brothers Entertainment uploaded their video of popular YouTube stars reacting to the Korean eating shows. As a result, the term skyrocketed on Google searches with people wanting to learn more about mukbang.

American YouTube content creators took notice and started doing their own spin on the trend. Mukbang went viral and a new crop of content creators started their own channels. Bethany Gaskin, who runs Bloveslife and Bloves ASMR Eating Her Way, has garnered over 2 million subscribers for her YouTube channels with her lively chats. She often hosts celebrity guests over a sprawling seafood boil -- a popular choice of food in the American mukbang community.

While the trend originates from South Korea, the American iterations have some significant differences. Unlike Korean muckbangers, Americans do not typically livestream. Koreans plan their streams around dinnertime hours so viewers can feel like they are sharing a meal with a friend. And yet Americans tend to be more conversational in their videos, even though their performances are pre-recorded. This conversational aspect gives the audience a deeper connection with the host beyond the food.

Another difference is that Korean mukangers tend to eat traditional Korean dishes. In contrast, American mukbangers eat a wider variety of foods, from rare tropical fruit to ramen to smoked alligator, often based on theme challenges.

But why are millions of people so drawn to watching perfect strangers eat in the first place? It’s a combination of sensory, psychological, social, emotional, environmental -- even neurological factors, says Rachel Herz, a neuroscientist and adjunct professor at Brown University Alpert Medical School as well as the author of Why You Eat What You Eat. Her specialty is analyzing how food triggers our senses and develops our behavior when it comes to what we like to eat.

A big part of that neurological factor is the ASMR (autonomous sensory-motor response) mukbang videos can elicit. ASMR is commonly described as a brain-tingling feeling, and people find it very relaxing. The familiar sounds of eating (slurping, chewing) and the imagery of mukbang videos supposedly trigger ASMR for many viewers.

“The sound has a huge impact [and] is an extremely [important] aspect of it because you are not getting the sensory piece part of the experience yourself,” says Herz.

This genre has proven to be very lucrative for content creators, often earning them sponsorships from popular food chains and restaurants in exchange for the exposure. According to NPR, Korean mukbang hosts reportedly can earn up to $10,000 per month and that standard is quickly traveling to America, with brands like DoorDash and Popeye’s Chicken sponsoring the most popular YouTubers. Kim Thai, for example, has been earning upwards of $100,000 a year.

The trend has not come without its criticism, however, with many saying that mukbang triggers those with eating disorders, and that vulnerable viewers could potentially develop unhealthy eating habits from watching. YouTuber Nicholas Perry has received criticism from viewers over abusive behavior and raised concerns over his mental health. He later revealed in a podcast interview that he left mukbang to focus on a vegan lifestyle and minimize the health concerns that came from his extreme eating.

For YouTubers, chasing mukbang stardom means taking on a high-calorie diet, which can cause health problems. Registered dietician and wellness YouTuber Abbey Sharp has been very critical about the mukbang wave. In a viral video she condemns the negative side effects.

She points out that Korean-style mukbang is focused much more on the companionship of sharing a meal. In her video she says, “what I do have a problem with is that Americans have appropriated this concept of mukbang to no longer be about companionship, but rather to these over-the-top, sensationalized eating challenges,” which in a clinical setting would constitute disordered eating.

Sharp doesn’t like the “restrict, binge, repent, repeat” cycle of American mukbang. And she’s concerned that because many mukbangers look thin (and even, in some cases, produce wellness content in other videos), this reinforces double standards for eating behaviors for thin people versus fat people. “We cannot judge a book by its cover when it comes to their health and wellness.”

Herz has a more nuanced take. "It can work in both ways. Someone with a binge eating disorder may [feel triggered] to start gorging on something. But at the same time, the vicarious experience of watching could resolve that urge for them to binge," she explained to Thrillist. “It would depend on the person and how these triggers affect them.”

Food culture in the United States is complicated, to say the least. It seems like half of us are devoted to a healthy lifestyle with exercise and a nutrient-dense diet, while the other half of us are caught up in patterns of overconsumption, particularly of highly-processed, low-nutrient foods. Americans love food and we consume a lot of it. As our habits change and we spend more and more of our social engagement on social media, it’s only a matter of time before it affects our behavior around food. Despite the criticism, American mukbang continues to thrive on the Internet and it doesn’t look like it’s slowing down anytime soon.

How Parenting Affects a Child's Development From encouraging schoolwork and sports to modeling values as a child grows (remember,…