Why Are All The Vampires Dating Teenagers?

Yes, if you're a male member of the undead population, the hottest thing going is apparently a teen (maybe early 20s) girl. But are we really supposed to accept that a 241-year-old vampire like Angel wants nothing more in the world than 16-year-old Buffy Summers? And before you say, "Oh, but he became a vampire when he was 26," when has it been OK for a 26-year-old to stalk a 16-year-old?

Damon Salvatore, roughly 160 years old, is going to enjoy domestic bliss with Elena, who's a tenth his age? Edward Cullen, the 17-year-old with over 100 years of experience, finds Bella Swan his intellectual equal? What possible common ground could these couples have, really? They can't go to a park or enjoy dinner together, and sooner or later their relationship is going to literally and metaphorically suck. 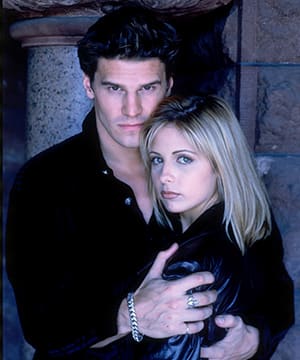 Imagine being middle-aged and dating someone too young to remember 9/11, except instead it's everything since the French Revolution.
(Image: 20th Television)

Why don't vampires find a working-class single mom with tons of life experience and be like, "Wow, I truly respect you. Become my bride of the night." Why don't they find a doctor or graduate student with a breadth of knowledge and think, "This one! She's probably super interesting to talk to!" Granted, if a vampire was turned early in life, it's reasonable for them to want a partner who appears somewhat similar in age. But that doesn't mean they need to do their shopping in high schools like a proud van owner. One Vampire Diaries actor even described his character's much younger love interest as "the ultimate case of cradle robbing."

Even if they insist on nurturing these gross relationships, why, dear god why, would they volunteer to go to high school forever? You already need a fake ID; just bump it a few years and accept the compliment when somebody says you look young. There are even other ways to creep! Edward Cullen mentions playing piano and listening to music during the many sleepless nights he doesn't spend stalking Bella. Why doesn't every vampire play half a dozen instruments? All vampires should at least play guitar. Even if they don't care about bettering themselves, they could join a band, which has always helped old perverts attract teenage fans. And why on Earth wouldn't they find a nice female vampire with similar interests who could truly be their peer and settle down? Why in the world wouldn't Eric like Pam? 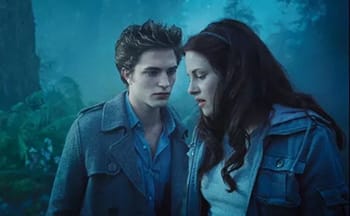 Though, like many senior citizens, we suppose vampires could just be looking for a teen to set up their computers.
(Image: Summit Entertainment)

Of course, it's not really about what a vampire could possibly see in a teenybopper; it's why the writers invented the whole "old man in a young body dates teen girl" trope in the first place. Obviously, females are the target audience of vampire fare, as the monsters "have always represented a certain psychosexual allure that has appealed to women." This is probably because it's flattering to fantasize that a powerful, dark, mysterious older man finds you (and only you) attractive, interesting, irresistible, and possibly delicious. It almost sounds like a variation on the "daddy" fantasy -- wise, protective, jealous, handsome, and definitely not your age. But historically, vampires in literature and folklore were meant to caution virtuous young women about the dangers of sexuality and "otherness." Yeah, that one backfired spectacularly.

A Canadian Company Has Created An Incredible Invisibility Shield By Alfredo Carpineti THE TECH APPLIED TO A SHIELD.(Image:…