By Kat Eschner
A new study adds weight to a growing body of evidence that a virus may be causing acute flaccid myelitis. 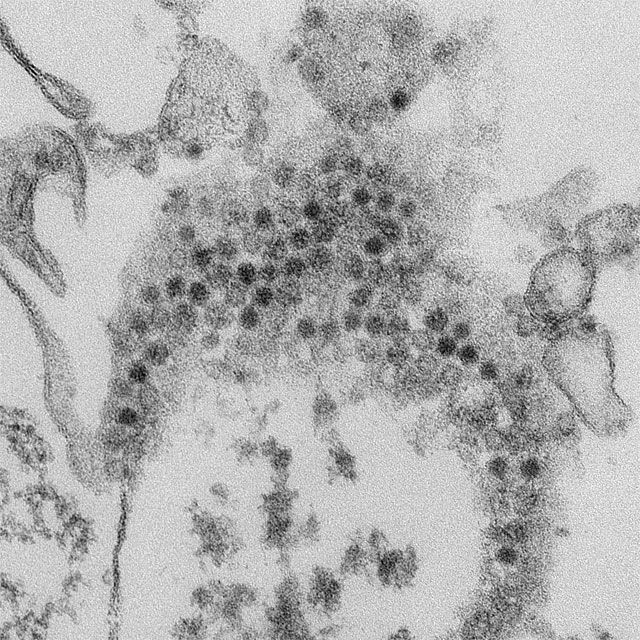 EV-D68 viral particles seen under a microscope. Researchers think this virus in particular, and one similar, could be at the root cause of the mysterious polio-like illness affecting kids.Cynthia S. Goldsmith and Yiting Zhang, CDC

Acute flaccid myelitis has been called "the new polio." Like that disease, it mainly strikes children and can cause debilitating paralysis when it infects the nervous system. But polio–which researchers know is caused by an enterovirus called poliomyelitis–is on the verge of being eradicated around the globe. AFM, however, could be on the rise, with 22 confirmed cases so far this year. And until recently, researchers were still mystified as to what was causing the paralysis.

However, we may be one step closer to pinning AFM down. A new study out this week in the journal Nature Medicine adds weight to a growing body of evidence that a virus may be causing the condition. If so, this could lead the way to a potential vaccine and a test to diagnose it.

"Enterovirus seems to be the cause of most if not all cases of AFM," Ryan Schubert, study author and UCSF neurologist, told Popular Science. The virus most often linked with AFM is called EV-D68 and another, EV-D71, seems to be connected as well. These viruses aren't new. They were first identified decades ago and have probably been causing flu-like symptoms in people for hundreds of years. But their connection to AFM cases suggests that these two strains have developed new abilities to infect the nervous system, Schubert said in a press release.

Previous research also pointed to this connection, finding EV-D68 and EV-D71 in the spinal fluid of several kids who were confirmed to have AFM. This work also found that AFM cases were more common during D68 and D71 outbreaks. "We've had some clear epidemiologic links since 2014," says Sarah Hopkins, a neurologist at the Children's Hospital of Philadelphia who was not involved with the study.

What’s held researchers back from confirming the causal connection between the two viruses and AFM is lack of evidence of them in AFM patients. The enteroviruses were found in the spinal fluid in four of the 590 confirmed cases—far from proof. Other hypotheses suggested that AFM was caused by something else entirely, such as a yet-to-be-identified virus or an autoimmune reaction.

This new study, which found antibodies to EV-D68 and EV-D71 in the spinal fluid of the majority of AFM patients it examined, moves scientists closer to definitively declaring these two specific enteroviruses as causing AFM.

To get these results, Schubert’s team took spinal fluid samples from 42 children with AFM and a further 58 children who had other neurologic diseases. They first searched for genetic evidence of the viruses in the spinal fluid using a gene sequencing technology called VirScan, but didn’t find it. When they started looking at the antibodies present in the spinal fluid, however, they found antibodies (proteins that the body produces in response to a specific pathogen) for enteroviruses in about 70 percent of the kids who had AFM, compared to just seven percent of those who had other neurologic diseases.

What else do we need?

To be certain, says Hopkins, researchers will need to look at a larger subset of affected children and look more in-depth at the antibodies present in each one. If a stronger link can be established, researchers will start trying to develop a vaccine (like Jonas Salk did with polio) and a clinical test to better diagnose the disease.

Time is of the essence: Even though it’s relatively rare overall, AFM becomes more prevalent in the late summer and fall, hitting much more heavily in even-numbered years. Last year, 2018, more than 200 cases were recorded in the United States—and it’s possible as many or more will be recorded next year, 2020.

If your child is displaying flu-like symptoms, has a fever, or has an upper respiratory infection, you don't need to worry about AFM yet, says Hopkins. After all, in the majority of people who get infected with enteroviruses, even children, their body fights off the infection and it never enters the nervous system at all.The thing to watch out for in a sick child are signs of unusual physical weakness or lack of body control. Hopkins says you don't need to wait until these signs become crystal clear: "When you're questioning whether there's [physical] weakness, that's the time to go to the emergency room."

By Jess Romeo October 17, 2019 DNA from tooth enamel helped scientists trace where humans grew up and how…