Despite virus, IOC unwavering on Olympics starting in July 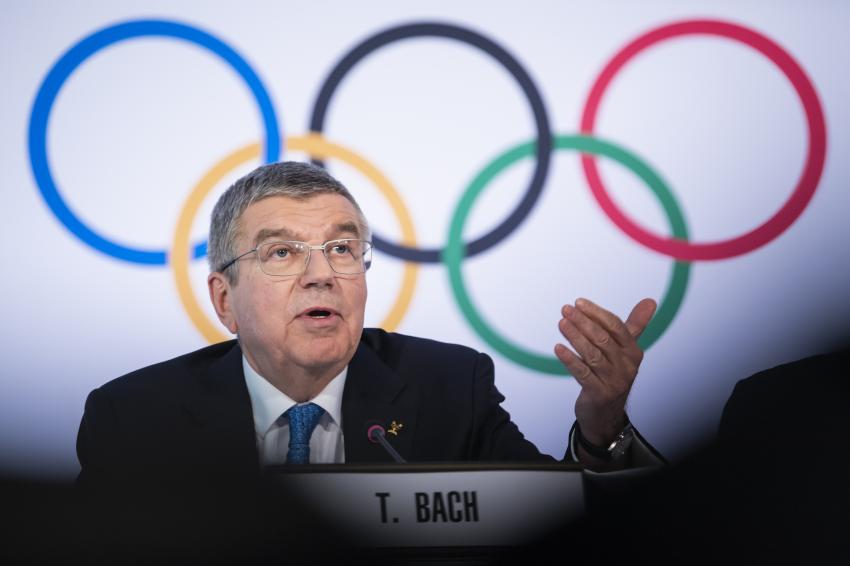 LAUSANNE, Switzerland
Despite worldwide concern and speculation about whether the fast-spreading virus outbreak will affect the Tokyo Olympics, the IOC’s leadership is not joining in the debate.

“Neither the word cancellation nor the word postponement was even mentioned,” International Olympic Committee president Thomas Bach told a news conference Wednesday about the second day of executive board meeting in Lausanne, Switzerland.

Bach sought to project calm assurance after holding a conference call with local organizers. In Tokyo, officials then briefed local media, some of whom wore protective masks.

Asked how he could be so confident the July 24-Aug. 9 Olympics will go ahead as scheduled, Bach replied: “Because we talk to the experts.”

“We are a sports organization and we follow the advice of the World Health Organization,” Bach said, referring to the United Nations agency based around 60 kilometers (40 miles) away in Geneva.

The coronavirus that emerged in China late last year had infected more than 90,000 people globally by Wednesday and caused over 3,100 deaths. Serious outbreaks have been experienced in Iran and Italy.

Federal authorities in the IOC’s home country Switzerland, which shares a border with Italy, have banned public gatherings of 1,000 people until mid-March to help contain the virus spreading.

Around 100 people were in a conference room at IOC headquarters to hear Bach use broadly similar answers to bat away virus questions from different angles.

“I will not add fuel to the flame of speculation,” Bach said when asked about deadline for deciding whether to postpone the Tokyo Games.

Asked if the WHO declaring a pandemic would change the IOC’s position, Bach said: “I will not take part in any way of such kind of mere speculations.”

Bach said he took confidence from having met the WHO’s director general and other leading officials last Friday. A task force of officials from the WHO, IOC and Japanese sports and public officials has also been working together for around three weeks.

The virus has affected qualifying competitions for many of the 33 sports on Tokyo’s medal program, which some postponed, venues changed, and travel issues for athletes from China and elsewhere.

“This is challenging, yes,” Bach acknowledged, “but I must also say I’m pretty proud of the Olympic movement, for the great solidarity and flexibility everybody has shown so far.”

Bach, who won a gold medal in fencing at the 1976 Montreal Olympics, was also asked if he had experienced a period as stressful as this in his 50 years as an athlete and sports official.

“Many,” he said, citing concerns of nuclear war with North Korea before the 2018 Winter Games in Pyeongchang, South Korea, and the zika virus before the 2016 Rio de Janeiro Olympics. He also noted boycotts at each Summer Games from 1976 to 1984 and the terrorist attack at the 1972 Munich Olympics.

Olympic torch relay to start as scheduled on March 26

Toshiro Muto, center left, CEO of the Tokyo 2020 Organizing Committee, talks to reporters as he is joined by the committee's president, Yoshiro Mori, center right, during a news conference in Tokyo on Wednesday. Photo: AP/Jae C Hong

TOKYO
Organizers of the Tokyo Olympics on Wednesday postponed announcing any measure that might limit crowds for the torch relay, which begins on March 26 in Fukushima Prefecture located 250 kilometers northeast of Tokyo.

Organizing committee President Yoshiro Mori and CEO Toshiro Muto talked by a teleconference call with the IOC executive board in Lausanne, Switzerland. They said they did not talk about postponing or cancelling the Olympics.

"There were no such talks at all," Muto said, speaking to more than 100 reporters at the committee headquarters.

In a statement, organizers said they "will take all necessary and appropriate measures to prevent the spread of infection among runners, spectators, and operational staff" during the relay.

The torch relay is promoted by Toyota and Coca-Cola, two key Olympic sponsors. The statement said organizers would consult with local governments "and partner companies" about the possibility of limiting the number of runners and fans as the torch moves around the country.

Muto said organizers hoped to decide about a week before each leg of the torch relay - it runs for almost four months all over Japan - on the need for "restricting the entrance of spectators to the celebration venue or asking visitors along the route to cooperate to prevent the spread of infection."

Any change to the July 24 opening date would have to be approved by international broadcasters. Tokyo is spending about $12.6 billion to organize the Olympics, although a national government audit says it's twice that.

"I don't know, I am not God," Mori replied when asked when a final decision would have to be made on the Olympics. 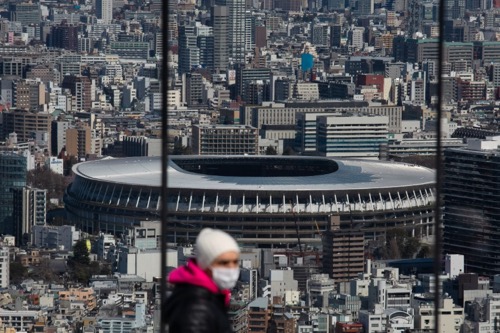 The new National Stadium, the venue for the opening and closing ceremonies for the Tokyo 2020 Olympics, is seen from Shibuya Sky observation deck in Tokyo. Photo: AP/Jae C Hong

Japanese Olympic Minister Seiko Hashimoto suggested in the Diet this week that the Tokyo Games could be postponed by a few months from the planned July 24 opening and still meet a contract agreement with the International Olympic Committee.

It's not that clear cut and seems unlikely.

The IOC has said repeatedly the Olympics will open as planned in just under five months despite a virus outbreak that started in China and has spread to at least 70 countries.

More than 3,100 deaths have been reported including 12 in Japan, which has closed schools, called off mass gatherings, and canceled several Olympic test events. Preseason baseball in being played in empty stadiums, the soccer J-League is suspended until at least March 18, and a major spring sumo tournament won't allow fans.

The 81-page "Home City Contract" signed in 2013 by the IOC, the city of Tokyo, and the Japanese Olympic Committee, gives the IOC wide latitude to terminate.

Hashimoto said: "The IOC has the right to cancel the games only if they are not held during 2020. This can be interpreted to mean the games can be postponed as long as they are held during the calendar year."

Under a section titled "Termination," the IOC has the right to terminate for many reasons: state of war, civil disorder, boycott, and others. It also says the IOC can terminate if it has "reasonable grounds to believe, in its sole discretion, that the safety of participants in the games would be seriously threatened or jeopardized for any reason whatsoever."

The same section says the IOC can terminate if "the games are not celebrated during the year 2020." The contract says the IOC has to give local organizers, the city, and the national Olympic committee 60 days notice to terminate.

The section also says the city, local organizers. and the national Olympic committee "waive any claim and right to any form of indemnity, damages or other compensation."

The modern Olympics have been canceled only three times, all during wartime.

The IOC gets 73% of its $5.7 billion income in a four-year Olympic cycle from selling broadcast rights. About half of that TV income is from American network NBC.

NBC parent company Comcast said that because of insurance and the way contracts are written, the network won't suffer losses if the Olympics are canceled. But Comcast CEO Brian Roberts said the company would miss out on ad-driven profit, which was $250 million for the 2016 Rio Olympics.

The IOC says it's relying heavily on the World Health Organization for advice.

Dr Ali Khan, the dean of the College of Public Health at the University of Nebraska, in an email to AP said the virus outbreak "is a fluid and evolving situation, which makes predictions especially foolhardy. However, it is hard to imagine the outbreak will be fully resolved by the end of May."

Two former IOC vice presidents, Richard Pound of Canada and Kevan Gosper of Australia, have suggested a decision about Tokyo must be made by late May. That would leave two months to line up more than 15,000 Olympic and Paralympic athletes, organize catering and television broadcasts - not to mention the fate of thousands of tourists, hotel reservations, flights, and ad campaigns.

Tokyo has also suspended training until at least May for 80,000 unpaid volunteers.

"From what we know from numerous other mass-gathering events including sporting events, it is very easy to spread diseases worldwide from such events from meningitis to Zika," Dr Khan said. "Besides welcoming athletes and spectators with their tiny microbes, there is and may be ongoing disease in Japan."

Why sanitizer works, but hand washing works better An expert guide to the great hand sanitizer debate. By Sara…