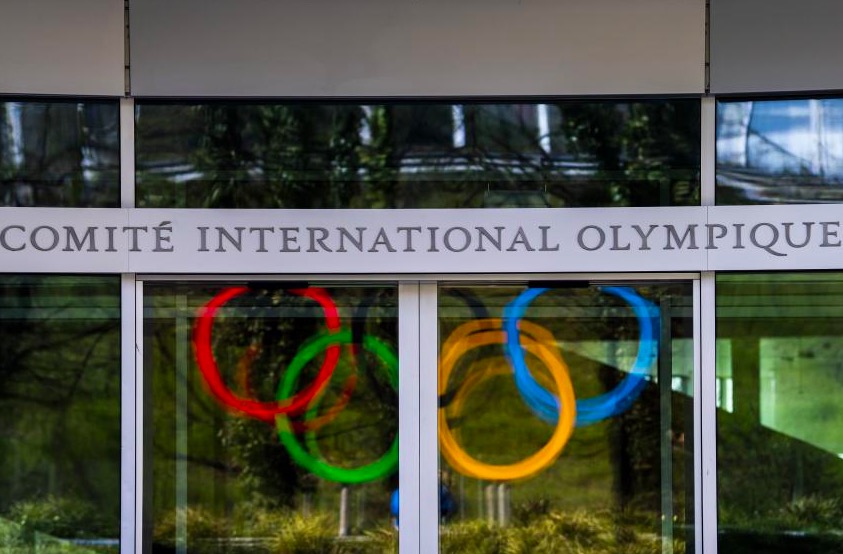 The Olympic Rings are displayed at the entrance of the IOC in Lausanne, Switzerland, Tuesday. Photo: Keystone via AP

Tokyo Olympics in 2021 will be beacon of hope, says IOC

TOKYO —— The IOC announced a first-of-its-kind postponement of the Summer Olympics on Tuesday, bowing to the realities of a coronavirus pandemic that is shutting down daily life around the globe and making planning for a massive worldwide gathering in July a virtual impossibility.

The International Olympic Committee said the Tokyo Games “must be rescheduled to a date beyond 2020, but not later than summer 2021, to safeguard the health of the athletes, everybody involved in the Olympic Games and the international community.”

“The leaders agreed that the Olympic Games in Tokyo could stand as a beacon of hope,” the IOC said in a statement released after IOC chief Thomas Bach held a teleconference with Japanese Prime Minister Shinzo Abe on Tuesday night.

Abe said that he requested a postponement “taking into consideration the current circumstances” and to secure an environment in which athletes can perform at their best and crowds can be safe and secure.

He added that he hoped to reschedule the Olympics as a proof of human victory over the coronavirus pandemic. 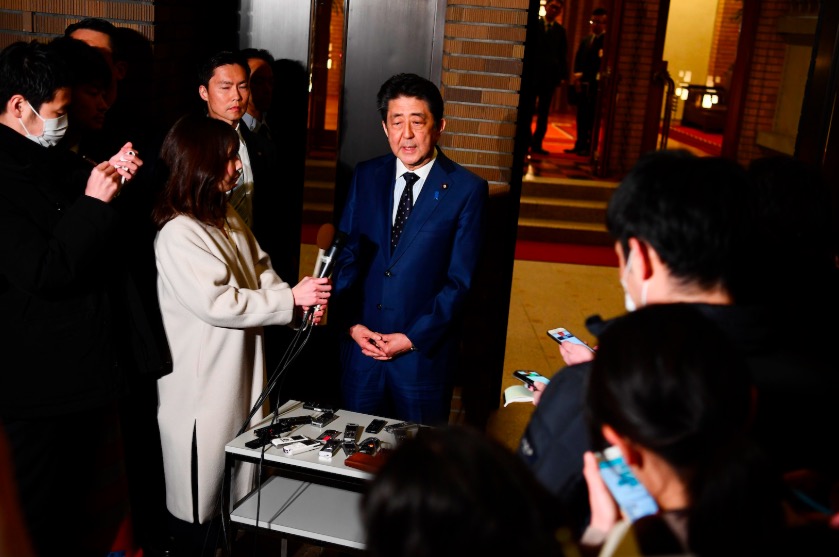 It was an announcement seen as all but a certainty as pressure mounted from nervous athletes, sports organizations and national Olympic committees — all forced to deal with training and qualifying schedules, to say nothing of international anti-doping protocols, that have been ruptured beyond repair.

“To all the athletes: take a breath, regroup, take care of yourself and your families. Your time will come,” she wrote on Twitter.

IOC President Thomas Bach and Japanese Prime Minister Shinzo Abe spoke via phone Tuesday morning, and they, along with a handful of executives from the IOC and Japan’s organizing committee, agreed to make the call to delay games that have been reported to cost upward of $28 billion to stage.

Other Olympics — 1916, 1940 and 1944 — have been canceled because of war, but none have ever been postponed for any reason, let alone a renegade virus that has accounted for more than 375,000 cases worldwide, with numbers growing exponentially. The Tokyo Games would still be called the 2020 Olympics, even though they will be held in 2021 — the first time the games will be held in an odd-numbered year since the modern era began in 1896.

The decision offers a sense of relief for the 11,000 or so potential Olympians from more than 200 countries, who no longer have to press forward with training under near-impossible conditions, unsure of when, exactly, they need to be ready — and for what.

“Thankful to finally have some clarity regarding The Olympic Games. A huge decision but I think the right one for sure,” British sprinter Adam Gemili said on Twitter. "Time to regain, look after each other during this difficult period and go again when the time is right!"

One reason the IOC took longer to make the decision was because it wanted to figure out logistics. It will be a daunting challenge. Many of the arenas, stadiums and hotels are under contract for a games held from July 24 to August 9. Remaking those arrangements is doable, but will come at a cost. There are also considerations beyond the price tag. Among them: The $1 billion-plus the IOC was to receive from NBC, the millions in smaller athlete endorsement contracts that are now in limbo, the budgets of the individual national Olympic committees, to name a few.

There’s also the matter of the international sports schedule. Nearly all 33 sports on the Olympic program have key events, including world championships, on the docket for 2021. Perhaps the best example of what a disruption this can cause would come from track. Famous Hayward Field at University of Oregon was rebuild and expanded at the cost of $200 million to hold next year’s world championships. Now that event will likely be postponed.

“There are a lot of pieces of a huge and very difficult jigsaw puzzle," Bach said.

But for weeks, it was becoming increasingly clear that pressing on with a July 24 starting date was no longer a choice.

Just about every sport across the globe has suspended play in the wake of the pandemic. The worldwide economy is faltering and people are increasingly being told it's not safe to congregate in large groups or, in some cases, even to leave their homes. Gyms are closed across America. Holding Olympic trials in a matter of months was becoming untenable.

Olympic committees in Canada and Australia were saying they either would not, or could not, send a team to Tokyo in July. World Athletics and the three biggest sports in the United States — swimming, track and gymnastics — were calling for a postponement.

As recently as Sunday, the IOC was saying it would take up to four weeks to reach a decision. Four weeks ended up being two days.

The decision came only a few hours after local organizers said the torch relay would start as planned on Thursday. It was expected to start in northeastern Fukushima prefecture, but with no torch, no torchbearers and no public.

The flame will be stored and displayed in Fukushima. Like everything else in the Olympic world, its next move will be determined at a later date.

"I'm thrilled for the athletes,’ Bob Bowman, who used to coach Michael Phelps and now works with other Olympic hopefuls, told The Associated Press. “That’s what this is all about at the end of the day, and really the world that gets to share in their journey and be a part of it. Now we can have a real Olympics that is healthy and fair.”

LONDON —— Delaying the Olympics is likely to cost insurers much less than cancelling the Tokyo Games altogether, with a chance that some of those involved may not have policies specifically covering a postponement, industry sources say.

The Tokyo Olympics were postponed on Tuesday to 2021, the first such delay in the modern Games' 124-year history, as the coronavirus crisis forced the delay to one of the last international sporting events still standing this year.

Jefferies analysts have estimated the insured cost of the Games at $2 billion, including TV rights and sponsorship, plus$600 million for hospitality.

The International Olympic Committee (IOC) takes out around$800 million of protection for each Summer Games, which covers most of the roughly $1 billion investment it makes in each host city.

After the postponement, the IOC, local organizers, sponsors and hospitality and travel providers are among organizations who may look to recoup some money from insurers for the delay.

But this process is likely to be complicated.

"Cancellation insurance usually includes postponement as standard," said Tim Thornhill, sales director, entertainment and sport, at Lloyd's of London broker Tysers, who also said this might not always be the case.

Tokyo 2020 organizing committee chief executive Toshiro Muto said on Tuesday it was not clear who would pay the extra costs arising from the postponement.

The cost of postponing the Games was not discussed by IOC chief Thomas Bach and Japanese prime minister Shinzo Abe on Tuesday, Bach said, adding: "this is about protecting lives".

Leigh Ann Rossi, Chief Operating Officer of Sports and Entertainment at insurance broker BWD, said that for those organizations whose policies do cover the costs of postponement,"a claim would be less...than for a full cancellation."

Rossi said it was difficult for insurers to determine an exact pay-out on such cover until after a postponed event finally takes place.

Insurance industry sources said the pay-outs would be smaller because companies would still be able to make money out of the Olympics when it finally happens.

Few sponsors have given details of their insurance. Comcast Corp has insurance if the Olympics don't proceed, Chief Executive Officer Brian Roberts said at a conference earlier this month.

Comcast's NBCUniversal has sold more than $1.25 billion in national advertising for the games, a new record for any broadcaster.

Insurance losses are likely to be borne by Lloyd's of London, a commercial insurance marketplace home to dozens of specialist insurers, industry sources say.

Lloyd's has asked its members to detail their potential losses from the coronavirus pandemic, and is due to report the aggregate 2019 results of its syndicate members on Thursday.

Reinsurers such as Munich Re and Swiss Re share part of the burden of large losses with insurers in return for part of the premium.

Munich Re has a $500 million exposure to the Tokyo Olympics, one source said. Munich Re declined to comment.

TOKYO —— The Olympic torch relay was postponed Tuesday because the Tokyo Games themselves were pushed back to 2021.

Organizers had planned to go ahead with the relay, starting Thursday, despite the spreading coronavirus pandemic. But shortly after the International Olympic Committee officially postponed the games, the president of the organizing committee said the relay would not go ahead.

“For the time being, the flame will be stored and displayed in Fukushima,” Yoshiro Mori said.

The relay was expected to start in northeastern Fukushima prefecture with no torch, no torchbearers and no public.

The flame arrived from Greece on March 12.

Does Hot Water Freeze Faster Than Cold Water? By Zidbits One commonly repeated factoid says that if you have…