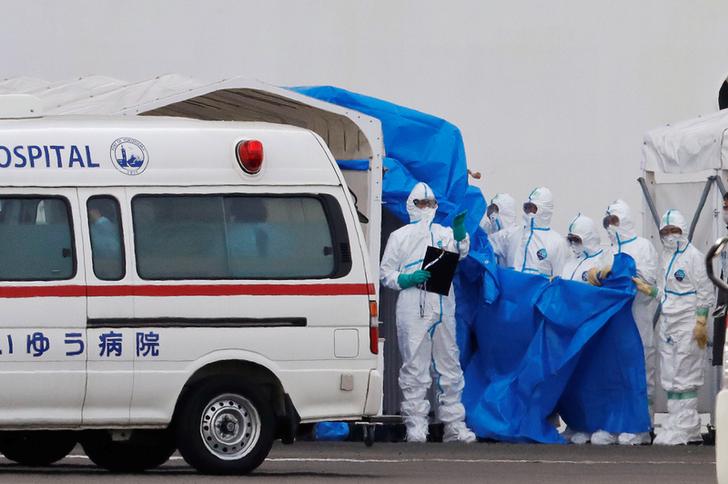 Workers wearing protective gear prepare to transfer passengers who tested positive for coronavirus from the cruise ship Diamond Princess to an ambulance bound for the hospital, at Daikoku Pier Cruise Terminal in Yokohama, on Friday. Photo: REUTERS/Kim Kyung-Hoon

Coronavirus cases on cruise ship in Yokohama jump to 61

Another 41 people quarantined on a cruise liner off Japan tested positive for coronavirus on Friday, bringing the total confirmed cases to 61, with thousands of passengers confined to cabins as testing continues.

The cruise ship, Diamond Princess, and the roughly 3,700 people aboard have been under two-week quarantine since arriving back at the port of Yokohama, just south of Tokyo, on Monday after a man who disembarked in Hong Kong was diagnosed with the virus.

The 61 cases came from a sample of 273 people who had been tested because they were either showing symptoms or had been in close contact with those who did, according to the health ministry.

Health Minister Katsunobu Kato told a news conference 21 of the newly found 41 cases were Japanese. Further tests would be conducted if additional passengers on board the ship developed symptoms, he said.

Video footage showed blue and white hoardings put up in the vessel as passengers diagnosed with the virus were being moved out to medical facilities.

The new patients would be transported to hospitals in Tokyo and neighbouring towns, the health ministry said.

The rise in the number of infections has worsened the mood for passengers stuck on the cruise, who were only allowed onto open decks briefly for fresh air.

"A bit more anxious today after announcements of more positives," one passenger, a 43-year-old Hong Kong resident on the ship with his family, told Reuters.

"I expected about that number. But it's still a shock to hear it. There must be more who were without symptoms at the last screening who will develop symptoms," said the man, who declined to be identified.

Ashley Rhodes-Courter, an American whose parents are on the ship, said she hoped U.S. officials would be able to help her parents leave.

"They are all breathing circulated contaminated air so they could be getting everyone infected," Rhodes-Courter said.

Experts say the virus can be transmitted via droplets from an infected person exhaling, coughing or sneezing, and can also spread via contaminated surfaces.

Transport Minister Kazuyoshi Akaba told reporters Japan had asked another cruise ship, the Westerdam, not to make port calls in the country. Prime Minister Shinzo Abe had said earlier that non-Japanese passengers on the ship would be denied entry.

Three planes last week brought a total of 565 evacuees back to Japan, a handful of whom were confirmed to have the virus.

The new ship cases take the total number of coronavirus infections in Japan to more than 80, according to Reuters calculations.

Health Minister Kato said Japan is not including the cruise ship cases in its national count, which stands at 21 patients.

"Whenever I see the table of the number of patients infected around the world, the top line is always of course China, and now in the past few days, the second country is Japan," Tsunoda said. "It looks really bad."

Anatomy and Structure of Viruses By Regina Bailey CDC / Dr. F. A. Murphy Scientists have long sought to uncover…