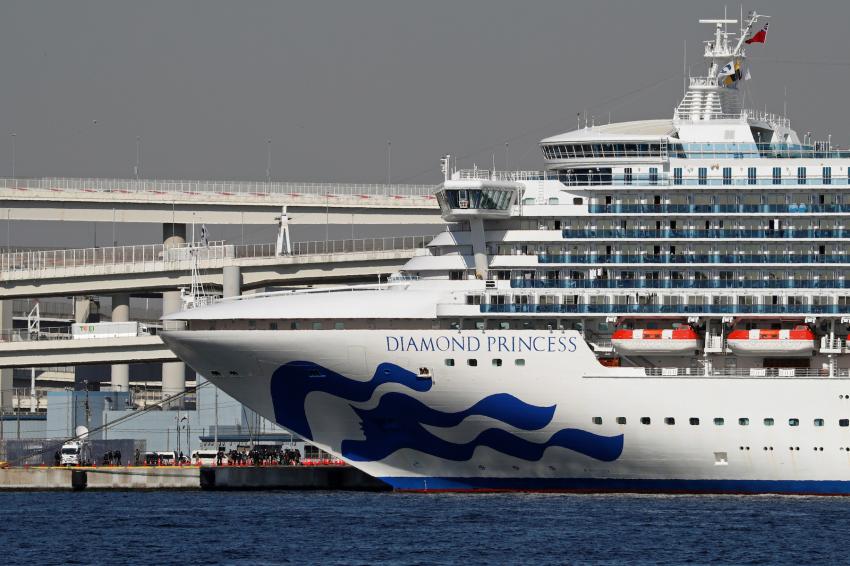 The cruise ship Diamond Princess, where dozens of passengers were tested positive for coronavirus, is seen at Daikoku Pier Cruise Terminal in Yokohama, on Monday. Photo: REUTERS/Kim Kyung-Hoon

66 more people confirmed with coronavirus on cruise ship in Yokohama

An additional 66 people on a cruise ship quarantined in Yokohama have tested positive for a new coronavirus, the operator of the ship said Monday, bringing the number of confirmed cases in Japan -- including some 130 on the vessel -- to more than 150.

Of the 66, 45 are Japanese, 11 are Americans, four are Australians, three are Filipinos and there is one each from Canada, Britain and Ukraine, U.S. company Princess Cruise Lines Ltd, operator of the Diamond Princess, said in a statement.

In an effort to prevent the spread of the deadly pneumonia-causing virus in Japan, the health ministry said it is considering testing all of the approximately 3,600 passengers and crew members aboard the ship when the two-week isolation period ends on Feb 19.

Once their results are clear, they will be able to leave the vessel.

"We need to properly address the unease and concerns of our citizens," said health minister Katsunobu Kato.

The Ministry of Health, Labor and Welfare had previously said it might be possible for people to disembark from Feb 19.

The ship has been kept in quarantine since a passenger, who disembarked in Hong Kong, was found to be infected with the virus.

With the death toll in the virus outbreak topping 900 in mainland China, Japan plans to send a fifth flight to Wuhan, a central China city at the center of the outbreak, as early as this weekend to bring home the few remaining Japanese there and in the rest of Hubei Province, Foreign Minister Toshimitsu Motegi said.

The charter plane is set to fly this weekend at the earliest and would be the last for the foreseeable future, Motegi told journalists in Tokyo.

Japan has brought back a total of 763 Japanese and their non-Japanese family members in four chartered planes since late January.

The overall number of confirmed cases in Japan includes 10 people who evacuated from Wuhan on government-chartered flights.

The World Health Organization has not added the number of infected on the Diamond Princess to Japan's total, Kato has said. In the WHO's situation report dated Sunday, 64 earlier confirmed cases were instead counted as being on an "international conveyance."

The Japanese government has provided medication for around 750 of the around 1,850 passengers aboard the Diamond Princess and is working to supply the rest.

The ship departed Yokohama on Jan. 20 and returned on Feb 3 after visiting Kagoshima, Hong Kong, Vietnam, Taiwan and Okinawa. Those confirmed as infected upon arrival have been hospitalized in Japan.

On Monday, Princess Cruise Lines said it will fully refund all passengers who were unable to disembark in Yokohama due to the virus outbreak.

The refund will include the cost of the cruise, hotel accommodation prior to and following the cruise, onshore excursions and services used aboard the ship.

Passengers who were transported to medical facilities after testing positive for the virus, or hospitalized for other reasons, will also be refunded.

The company will additionally cover all costs incurred by those quarantined aboard the ship since last Tuesday, when passengers were originally scheduled to disembark at Yokohama.

The Ministry of Land, Infrastructure, Transport and Tourism said that 13 of 14 foreign cruise lines scheduled to dock in Japan in February have cancelled their tours.

The remaining cruise ship, the U.S.-operated Ocean Dream, is set to dock at Yokohama on Saturday and Kobe on Sunday. 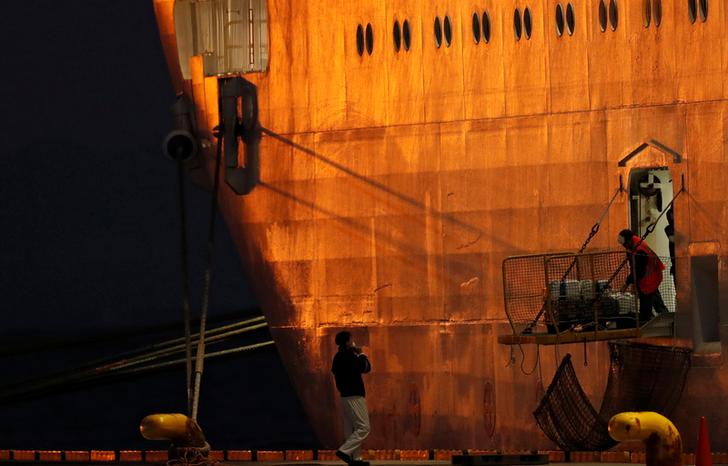 Today 06:40 am JST 19 Comments
By Elaine Lies and David Dolan

Some cruise ship passengers savored lavish meals; others watched movies or were glued to the live Academy Awards broadcast. The lucky few whose turn it was to get fresh air paced the decks, reveling in a glimpse of blue sky.

Nearly a week into quarantine on the Diamond Princess, tied up at the quay in Yokohama, boredom warred with anxiety as the hours ticked by and 66 more people tested positive for coronavirus, bringing the total cases on the ship to 136.

Health authorities have said the quarantine will stretch to Feb 19 unless something unexpected happens, meaning deliverance is still more than a week away for the nearly 3,700 crew and passengers, ranging in age from children to octogenarians.

For some, the quarantine could be even longer. A World Health Organization statement on Sunday said the period could be extended "as appropriate" for close contacts of newly confirmed cases.

Many passengers appear to be trying to put on a brave face, flooding social media with photos of food, a young boy and his father snuggling in bed, and shipboard TV broadcasts of a magician - also under quarantine - performing tricks with red silk scarves.

"Princess stepping up its game with food service," wrote passenger Matthew Smith under a photo of plates of food - including heaps of smoked salmon and large pieces of chocolate cake. "You might have to drag me off the ship when the quarantine ends."

Others watched the Oscars, which were broadcast live on Monday morning. Informal ballots were distributed to passengers beforehand, which one person hailed as "Important Mail Delivery!!!"

Aun Na Tan said it had been many years since she had viewed the ceremony live.

"Normally it was on during our work time, but now we have plenty of time," she said.

A 43-year-old Hong Kong resident quarantined with his wife, child and other family members did the same. He declined to give his name.

"We were rooting for 'Parasite'," he told Reuters, referring to the South Korean film that took Best Picture and two other awards. "We are doing origami; the ship is making instructional videos. We are doing some exercise."

Getting off the ship was a relief, even for some who left for the hospital.

"We are in a much more pleasant setting than we were on the ship," said Clyde Smith, 80, from his hospital room in western Tokyo, where he was evacuated after he and his wife tested positive.

"We're doing great, and right now I am looking at Mt Fuji" from the window of the hospital room, said his wife Renee, also 80.

The biggest regrets for the couple, from Atlanta in the United States: having to leave their grandsons, 25 and 23, in the cabin they had shared on the ship, not bringing more changes of clothes and being stuck with Japanese hospital fare.

"I would really love a Big Mac and french fries," Renee said. "I'm getting tired of miso soup."

The Smiths say they aren't worried about their health, as they've shown no symptoms, despite having the coronavirus.

"We’ve had a good life, if things don't work to our advantage on this one - so we feel good about life in general," Clyde said. Asked if this experience would put the two retirees– who have visited all seven continents – from further travels, Renee declared, "Oh, heavens no. This is a little bump in the road."

Back onboard the Diamond Princess, small groups are allowed out on deck every other day but must wear masks and stay well away from other people.

"We're out in the bay, docked, so it's kind of nice," passenger Adam Waltz said in a video showing him and a companion walking briskly under Monday's blue sky, sun flashing off the ocean.

But others were less sanguine. One passenger, with the Twitter name Da, said he or she had talked to younger passengers worried about financial repercussions, such as losing jobs, due to the enforced time off.

"There's going to be a shipboard announcement, but I can see ambulances and trucks lining up," Da wrote. "Now we're just waiting for more news from the Health Ministry."

Cruise ship officials said they would expand the entertainment on offer to help passengers pass the time.

To slow an epidemic, focus on handwashing Improving the rate of handwashing at just 10 major airports could significantly…

9 Ways to Sleep Smarter These tips can help you improve your sleep for the better! By Michael J…