Depth of Field: Visual Poetry in the Chicken Sandwich War

This one paradoxical photo captures the essence of unmet fried-food desires.

The lone figure in the image seems to be trapped in some bizarro universe where talk of the Popeyes fried-chicken sandwich is pure mythology. 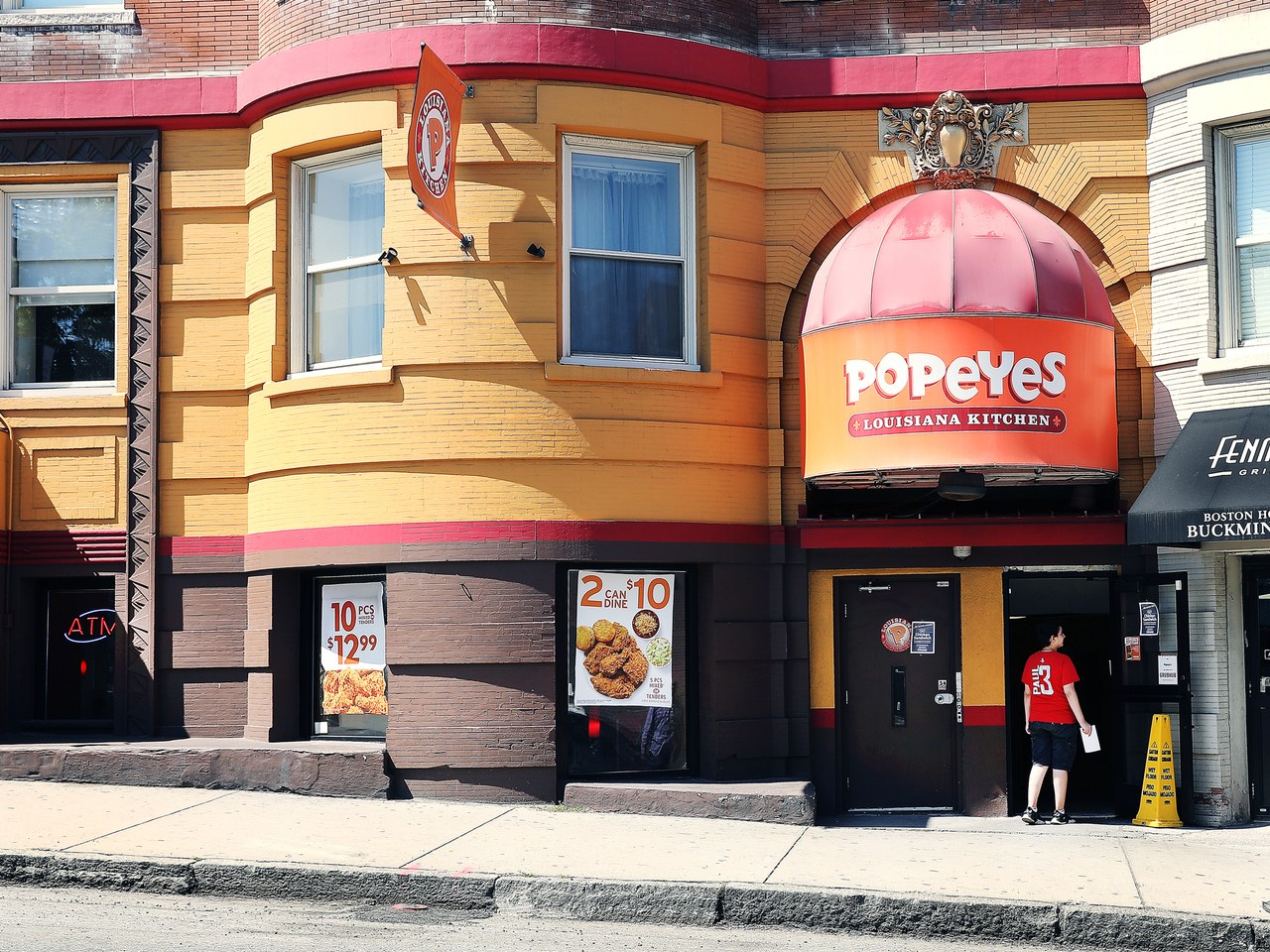 Just over two weeks ago, on August 12, Popeyes—the iconic fast-food chain known for its savory take on Southern cuisine—debuted its own version of a fried-chicken sandwich. The public announcement, made via Twitter in the reliably unfunny brand-speak many companies use on social media now, detailed its ingredients: a crispy buttermilk-battered chicken breast, topped with mayonnaise and pickles, and served on a brioche bun (as later publicized, there was a spicy option also available). The tweet sent the nation into a fit of delirium. Family members, friends, colleagues, people whom I didn’t even know but overheard talking on sweaty Brooklyn streets—everyone, it seemed, was eager to luxuriate in the bliss that was Popeyes’ latest creation.

The fried-chicken sandwich was just the latest in an escalating trend among fast-casual purveyors: Boutique restaurants including Danny Chang’s Fuku and fast-food chains such as Shake Shack are cornering the market with their own spins on the golden bird. In its totality, fried chicken is an odd compression of American history, capitalist self-interest, communal identity, pop art, and food nirvana. It occupies rarefied air among other classic American fare. Apple pie, meatloaf, Caesar salad, the hamburger—all a bit overrated in my estimation.

Of course, fast-food behemoths—particularly KFC, Wendy’s, and Chick-fil-A—have long served fried-chicken sandwiches as go-to menu items, each with signature and secret ingredients. Chick-fil-A, which perhaps has the most collectively beloved iteration (despite the company’s previous donations to anti-LGBTQ causes; or maybe because of it—we live in strangely regressive times), had the most franchise IP to lose. Very predictably, they responded, cresting on the tide of publicity that Popeyes was riding, with a tweet. Followed by Wendy’s and then by Shake Shack. Identity politics is a messy business in America. This was never going to end well.

Like a fair share of American stories, this one ends in tragedy. After two weeks of people scrambling to Popeyes—unimaginably long lines snaked around corners and stalled drive-thrus; one North Carolina teen even went about registering people to vote as they waited to order food, of which Barack Obama approved—the chain announced it had run out of sandwiches. “You ate ’em all,” a video announced. When I ventured into my local Popeyes late last week, in Bed-Stuy, I was greeted by a message, inscribed in black sharpie, on a cardboard sign: “We are all out of chicken sandwiches.”

Photographer Pat Greenhouse’s image outside a Popeyes on Brookline Avenue, near Fenway Park in Boston, seizes a comparable sentiment. The photo feels eerily sad in its capture: ghosts haunt the page. The lone figure in the image seems to be trapped in some bizarro universe where talk of the Popeyes fried-chicken sandwich is pure mythology. The street is naked of movement. Looking at Greenhouse’s shot, it is an image that challenges chronology. It seems to come to us, gazing at its flat, plain colors, from a distant time even though it’s here with us now. The paradox of the photo—perhaps of all notable photography, images that stir and transfix us—is that it wants to give us what we yearn for, even though it can’t.

How the Socratic Method Works and Why Is It Used in Law School By Michelle Fabio Updated July 15,…