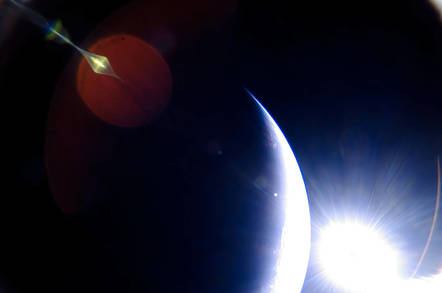 An image taken of Earth by the cameras on LightSail 2 on 7 July. Image credit: The Planetary Society

A small cube sat has become the first spacecraft in Earth’s orbit to fly using only the power of sunlight shining down on its solar sail, after it was successfully deployed on Tuesday.

The Planetary Society, a nonprofit focused on space exploration and currently led by Bill Nye (yes, the Science Guy), announced it had successfully unfurled the shimmering silver sail attached to the LightSail 2 spacecraft. The 32 meter square sail, held by on four cobalt-alloy booms, is now accelerating powered by nothing but the sun's emissions.

Here’s a short animation of what it looks like in space, since the team of controllers haven’t managed to retrieve any real photos of the sail from the camera aboard on LightSail 2 yet. But they did confirm that they successfully kicked the spacecraft in solar sailing mode and that the momentum wheel, used to steer it to fly high enough to deploy its sails, had spun up.

The sail works by collecting photons emitted from the Sun; these particles bounce off its reflective surface and impart a little momentum. As tons of photons strike the sail, they apply force (not much - about the same as a paperclip on your hand), but since there's no friction in space this will propel the spacecraft forward at ever-faster speeds. Lasers have also been postulated to add extra force to the sails.

LightSail 2 was shuttled into space on SpaceX’s Falcon Heavy rocket a month ago. The crowdfunded spacecraft had a predecessor, LightSail 1. The first version looked pretty much identical to the second one, but didn’t come with momentum wheel or a mini DVD containing a list of the names of Planetary Society members, people who contributed to the LightSail Kickstarter campaign, and images from its “Selfies to Space” project.

You can track the nifty cube sat sailing across our skies and even check its battery level here.

Stargazers hoping to spot LightSail 2 will need a telescope and you'll have around a year to spot it. After that the spacecraft's atmospheric friction will lead to it falling back to Earth, destroying itself in the process.

What Percentage of the Human Brain Is Used? Debunking the 10% Myth by Alane Lim Updated August 04, 2019…