There’s nothing more disturbing than being followed by a stranger while on your own. Sadly, so many women out there have experienced the feeling at least once in their lifetimes. And the fear sticks to you. Gallup’s annual crime survey showed that 45% of women in the US do not feel safe walking alone at night, compared with 27% of men.

This Twitter thread reveals just how united women are when it comes to protecting each other on the streets. When one girl wrote on Twitter “If a girl suddenly acts as if she knows you in public and acts like you’re friends, go along w it she could be in danger,” it immediately resonated with others.

More women joined the thread and shared their own stories of being followed and saved, or protecting someone else. It all reveals just how important it is to keep an eye on what’s going on around you and stepping in when your gut is telling you to.

@mxrixm_nk: If a girl suddenly acts as if she knows you in public and acts like you're friends, go along w it she could be in danger.

Others quickly started sharing their own terrifying stories 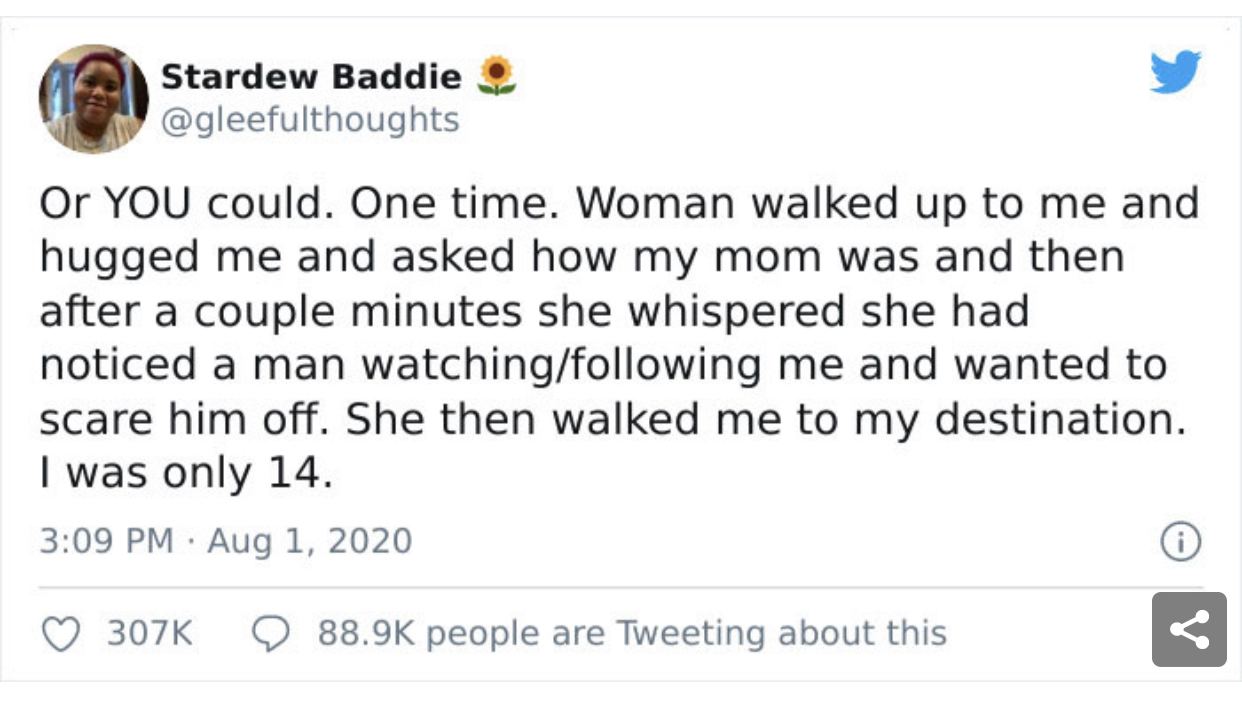 Stardew Baddie (@gleefulthoughts): Or YOU could. One time. Woman walked up to me and hugged me and asked how my mom was and then after a couple minutes she whispered she had noticed a man watching/following me and wanted to scare him off. She then walked me to my destination. I was only 14.

Every one of us can become a better bystander against harassment—especially when it happens in public spaces like public transport, streets, and metros. Claire Tatyzo, who runs intervention workshops, suggests “instead of giving yourself reasons to avoid intervening, think about the reasons you should do something.” 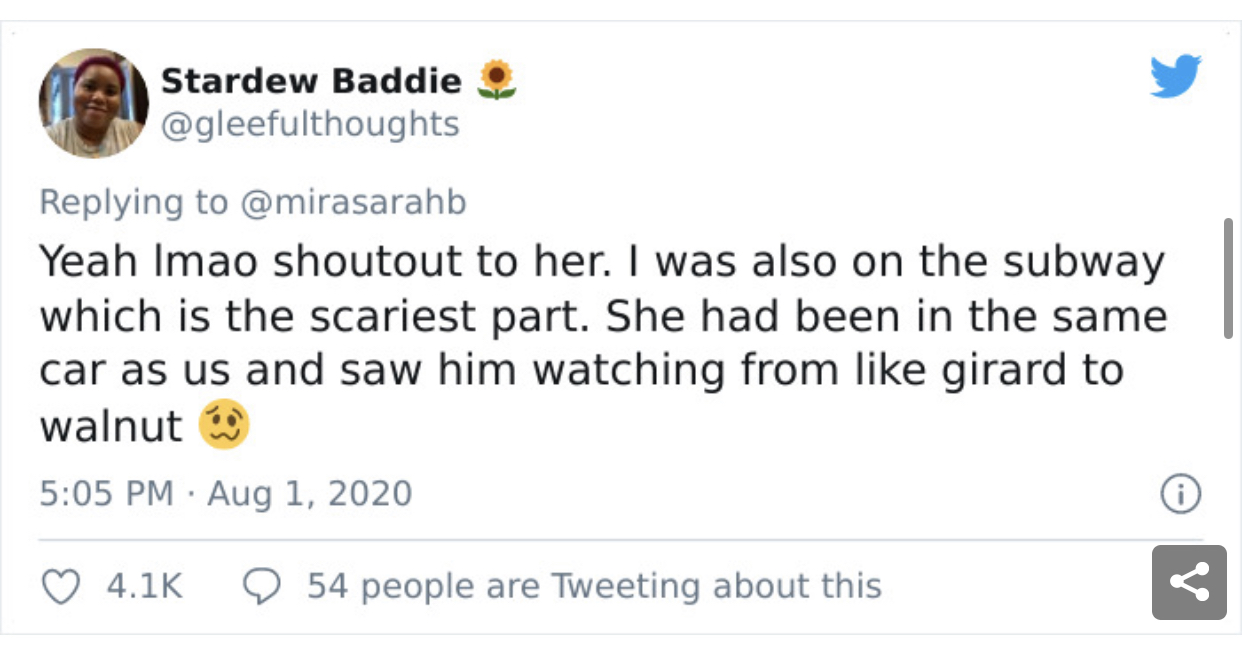 Stardew Baddie (@gleefulthoughts) replying to Sarahfina (@mirasarahb): Yeah lmao shoutout to her. I was also on the subway which is the scariest part. She had been in the same car as us and saw him watching from like girard to walnut. 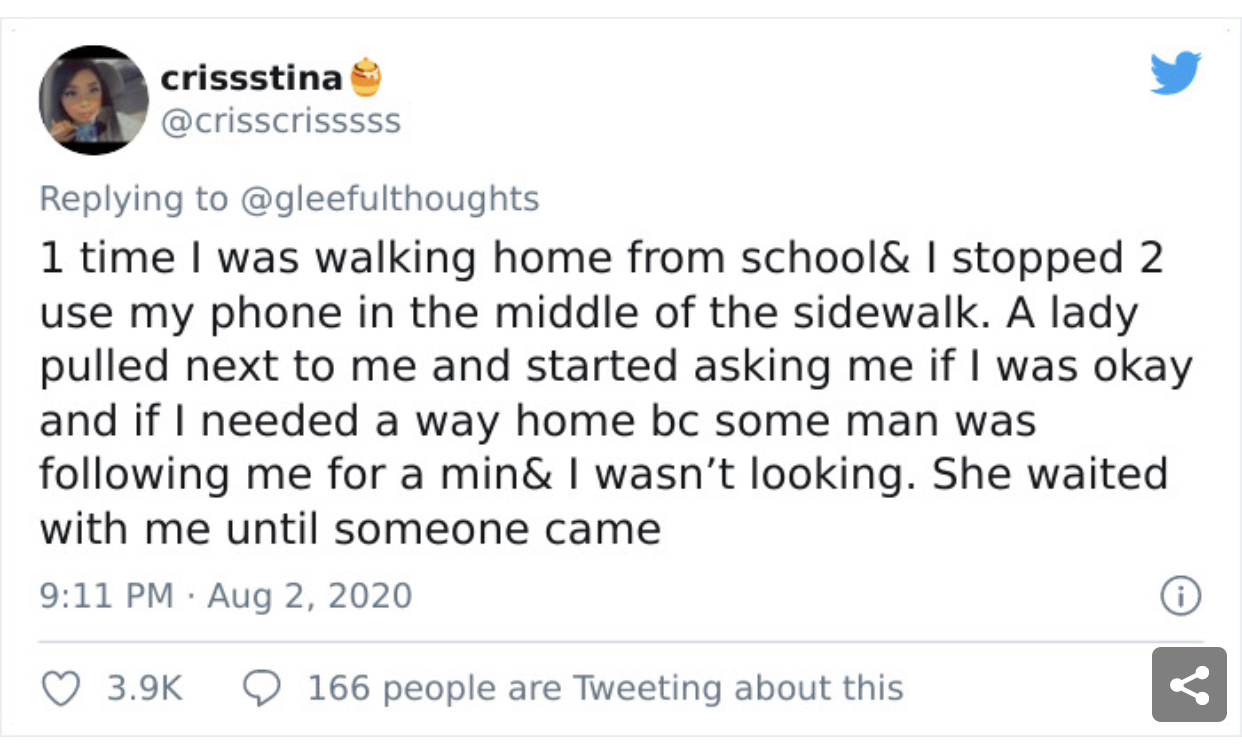 crissstina (@crisscrisssss): 1 time I was walking home from school& I stopped 2 use my phone in the middle of the sidewalk. A lady pulled next to me and started asking me if I was okay and if I needed a way home bc some man was following me for a min& I wasnt looking. She waited with me until someone came. 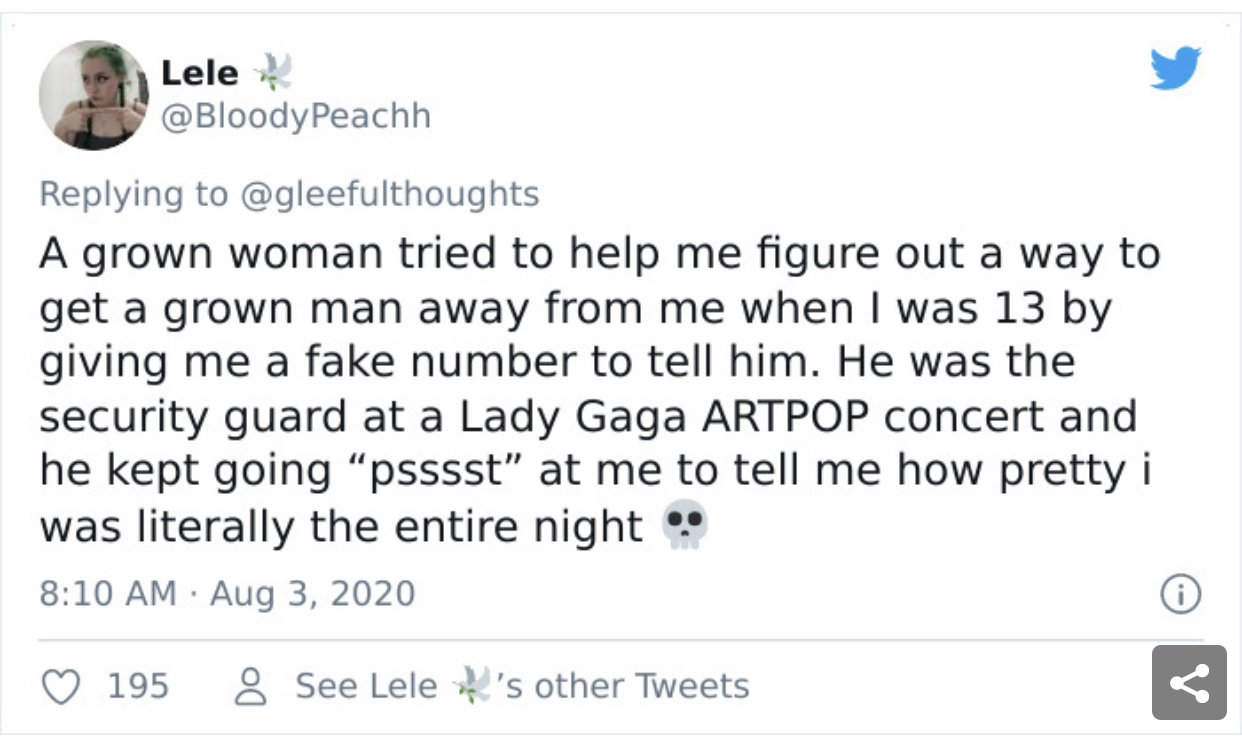 Lele (@Bloody Peach): A grown woman tried to help me figure out a way to get a grown man away from me when I was 13 by giving me a fake number to tell him. He was the security guard at a Lady Gaga ARTPOP concert and he kept going"psssst"at me to tell me how pretty i was literally the entire night.

Here some practical pieces of advice on how to do so. First, if you witness someone harassing a woman with an improper line, joke, or acting poorly in general, call them out. “That’s not ok” or “it’s not funny” would be enough to make the harasser think twice before doing it again.

Second, employ the “old friend” method that has been discussed in the thread. According to ABC, one man in one of Tatyzo’s workshops saw a woman being harassed at a bus stop. He went up to her, pretending to know her, and said, “Hey, Sally,” which created an opening for her to leave. Another way is to interrupt other passersby and tell them that you’re lost.

And third, if you ever feel like someone may be in a problematic situation, often trusting your gut should be fine—simply check on them. Ask them if they’re okay, and if needed, ask again. Asking and double-checking is never too much, and it can literally change the whole situation. 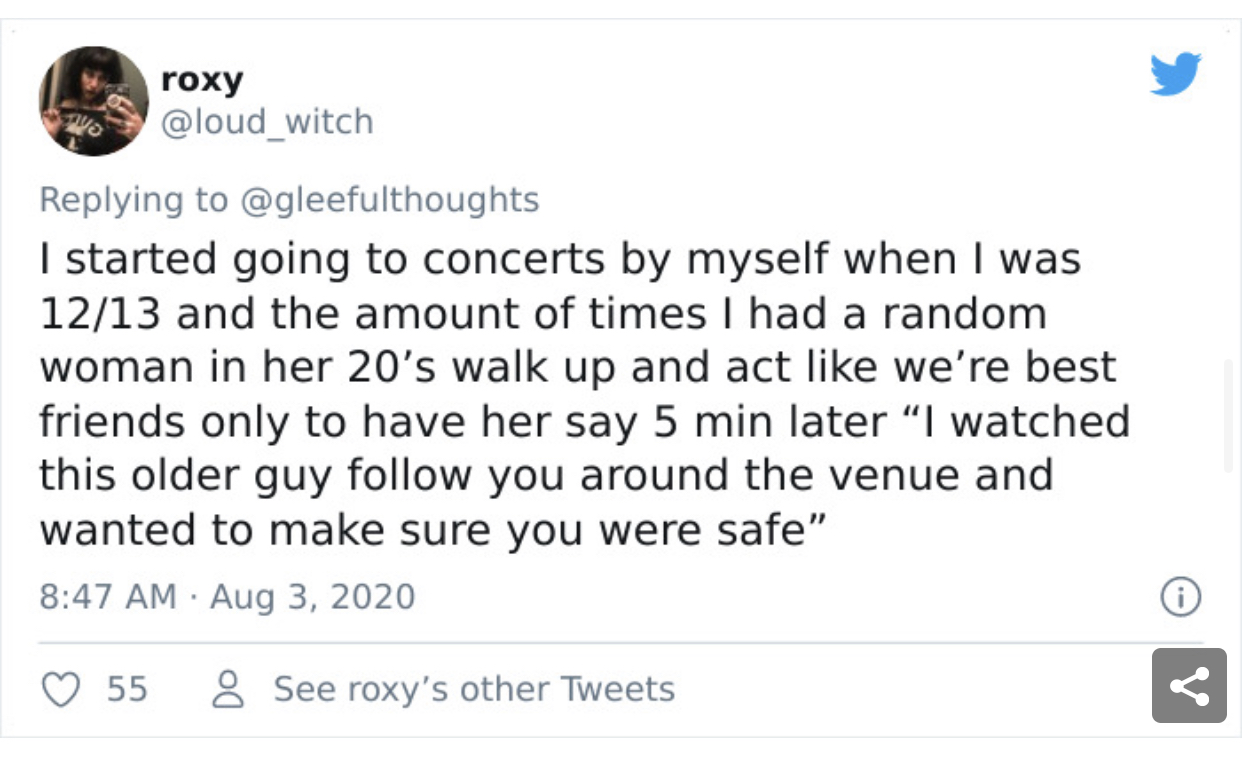 roxy (@loud witch): I started going to concerts by myself when I was 12/13 and the amount of times I had a random woman in her 20's walk up and act like we're best friends only to have her say 5 min later"I watched this older guy follow you around the venue and wanted to make sure you were safe" 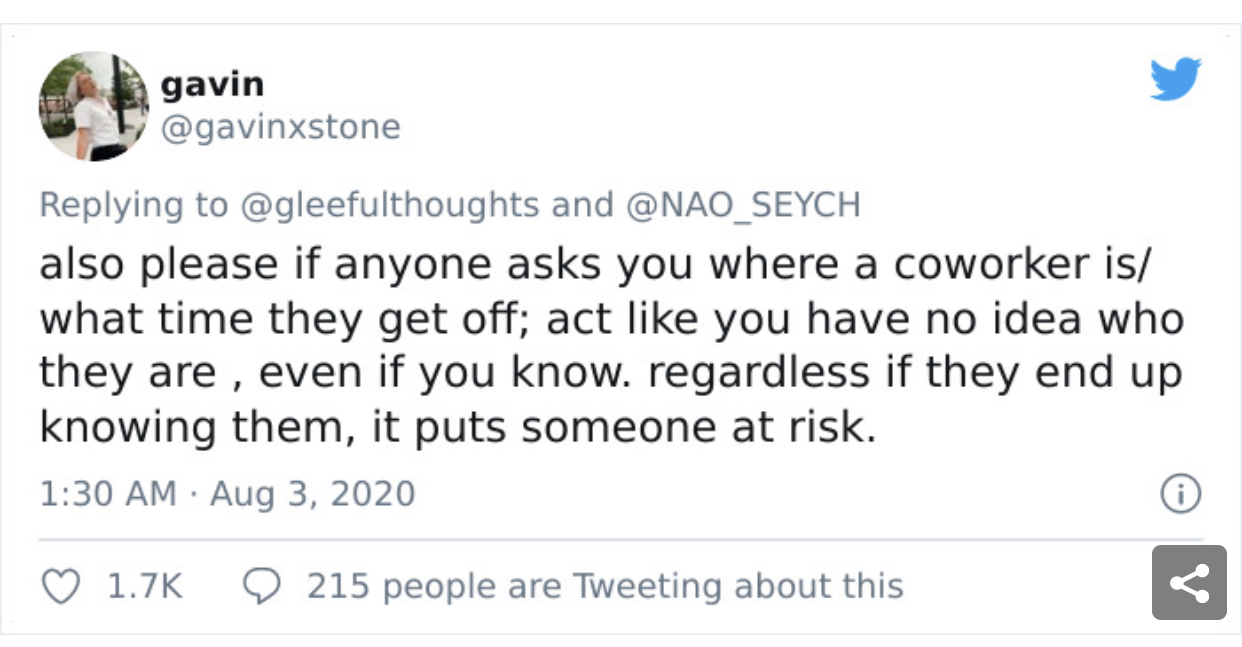 gavin (@gavinxstone): also please if anyone asks you where a coworker is/what time they get off; act like you have no idea who they are, even if you know. regardless if they end up knowing them, it puts someone at risk. 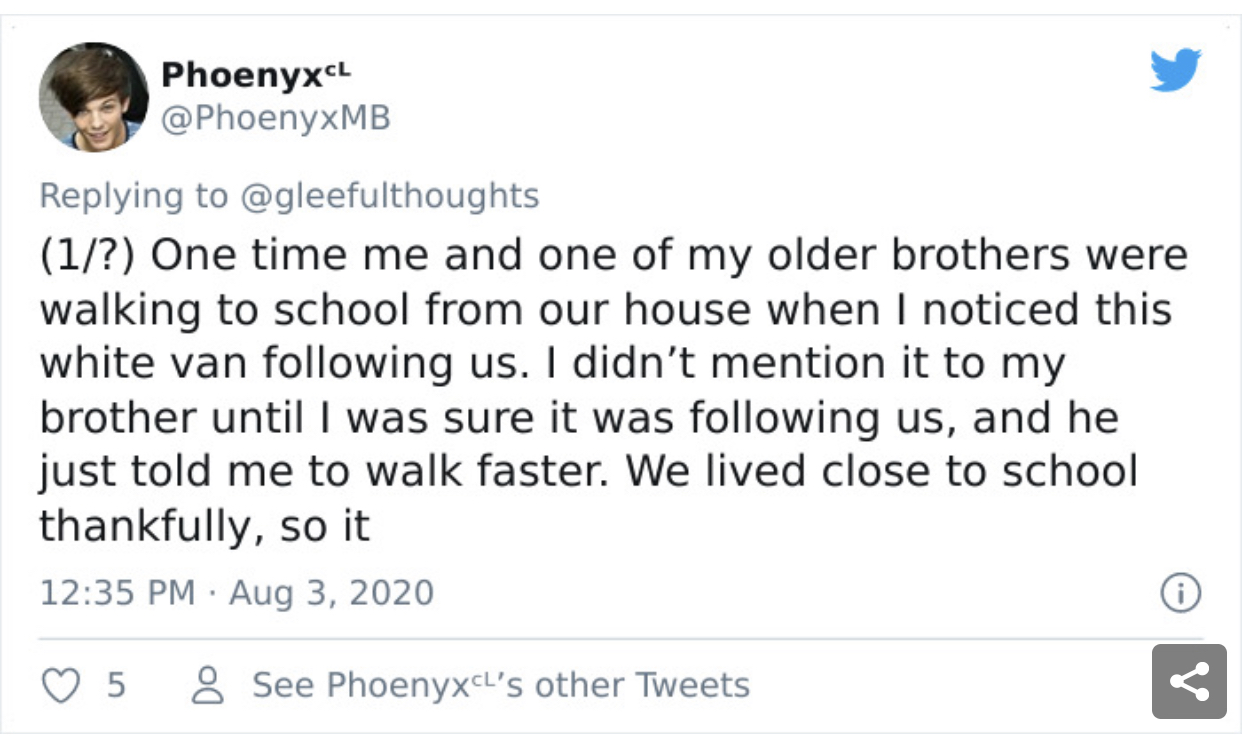 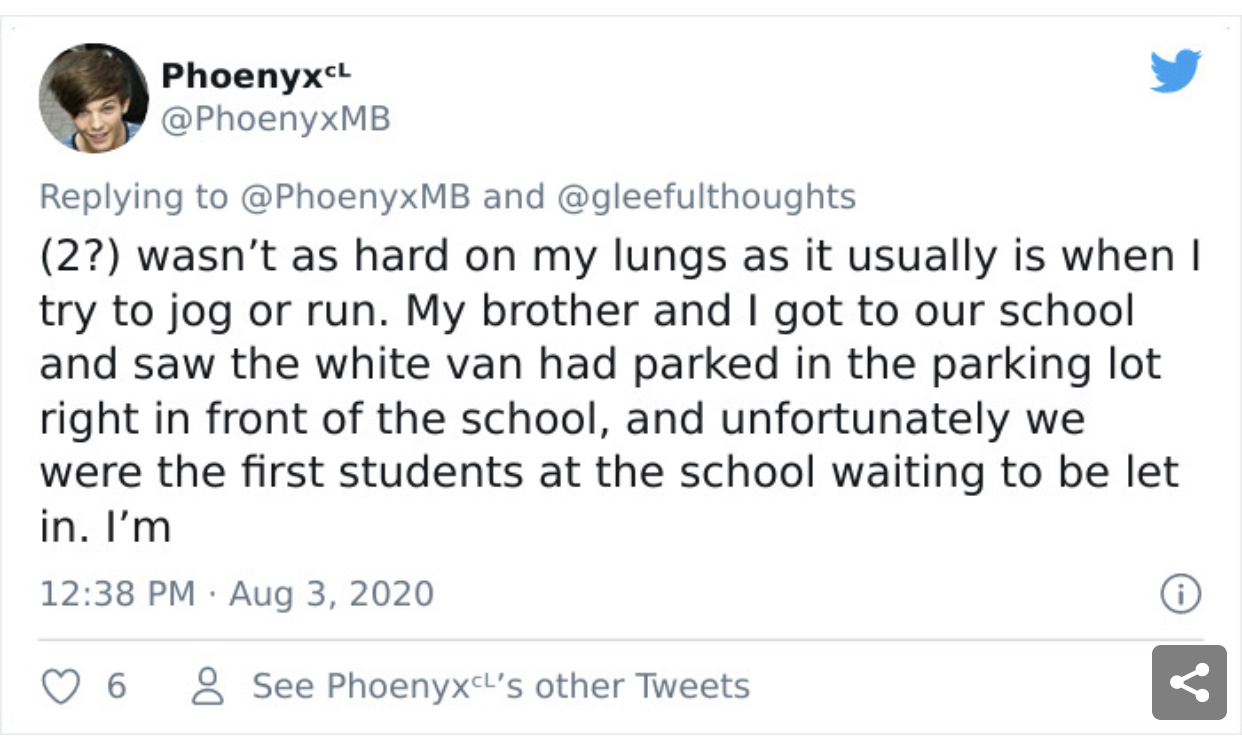 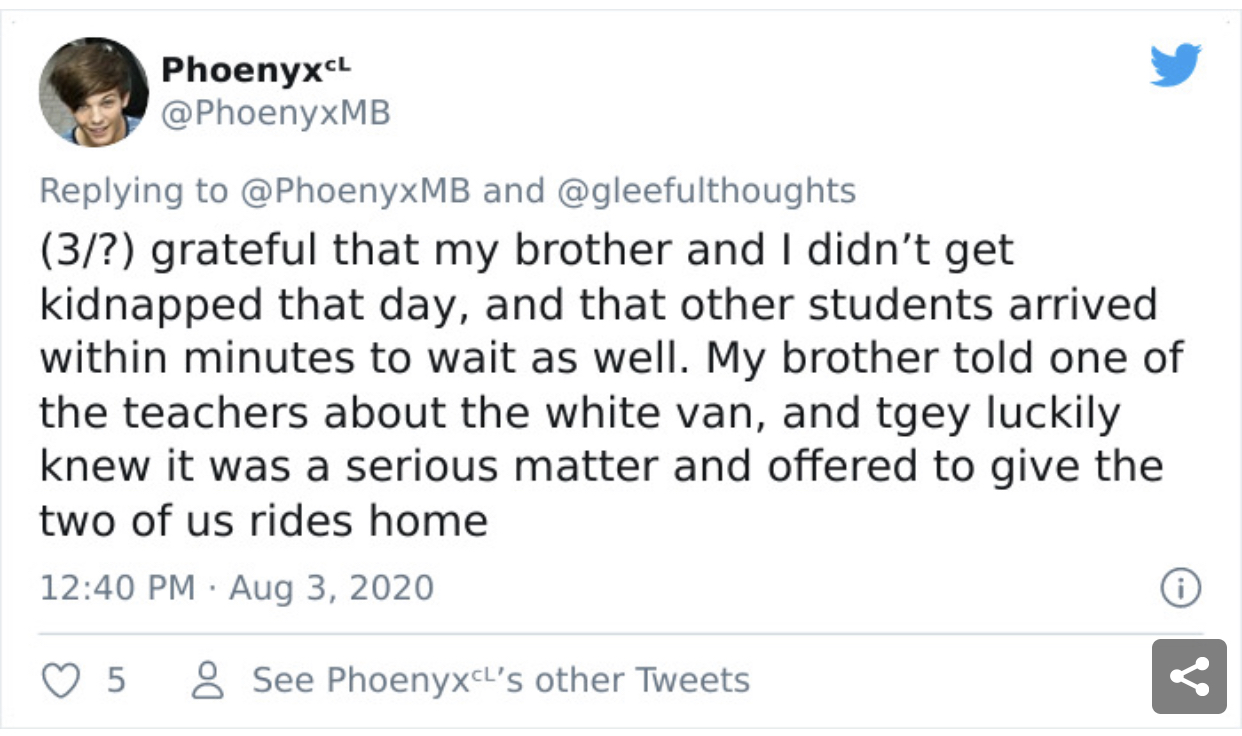 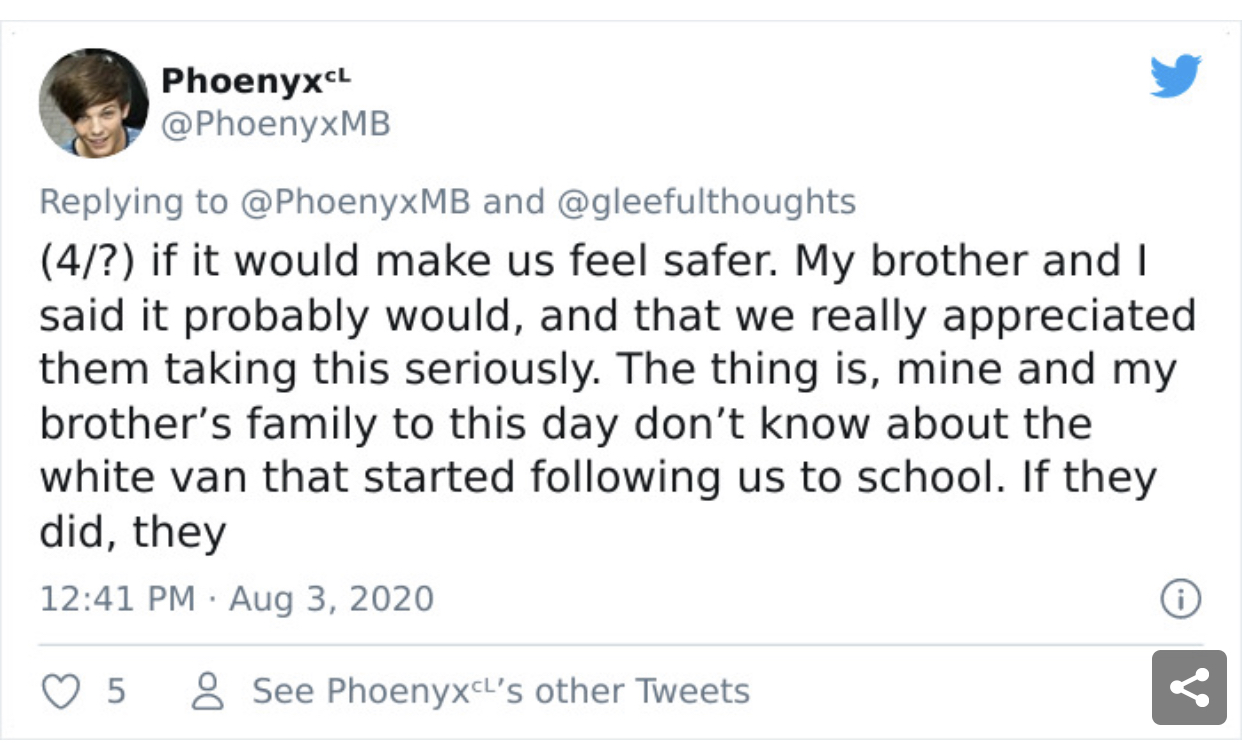 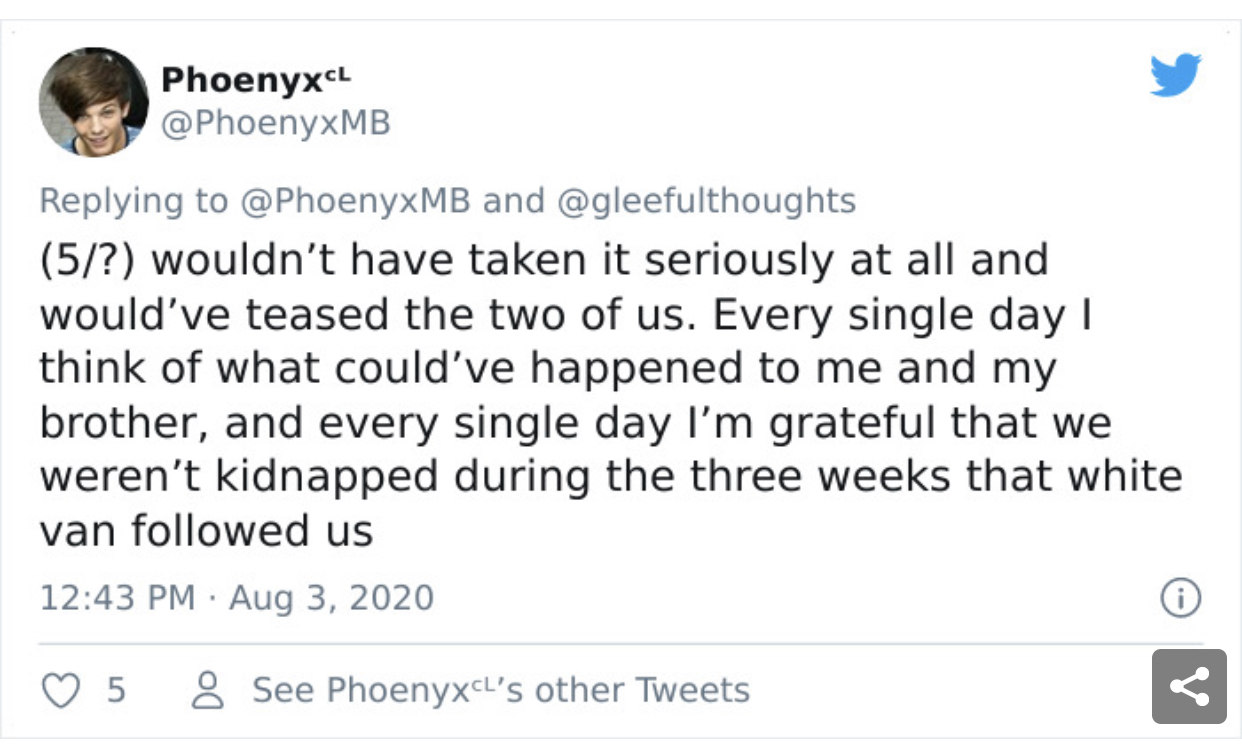 Phoenyxcl (@Phoenyxmb): One time me and one of my older brothers were walking to school from our house when I noticed this white van following us. I didn't mention it to my brother until I was sure it was following us, and he just told me to walk faster. We lived close to school thankfully, so it wasn't as hard on my lungs as it usually is when I try to jog or run. My brother and I got to our school and saw the white van had parked in the parking lot right in front of the school, and unfortunately we were the first students at the school waiting to be let in. I‘m grateful that my brother and I didn't get kidnapped that day, and that other students arrived within minutes to wait as well. My brother told one of the teachers about the white van, and tgey luckily knew it was a serious matter and offered to give the two of us rides home if it would make us feel safer. My brother and said it probably would, and that we really appreciated them taking this seriously. The thing is, mine and my brother's family to this day don't know about the white van that started following us to school. If they did, they wouldn't have taken it seriously at all and would've teased the two of us. Every single day I think of what could've happened to me and my brother, and every single day I'm grateful that we weren't kidnapped during the three weeks that white van followed us. 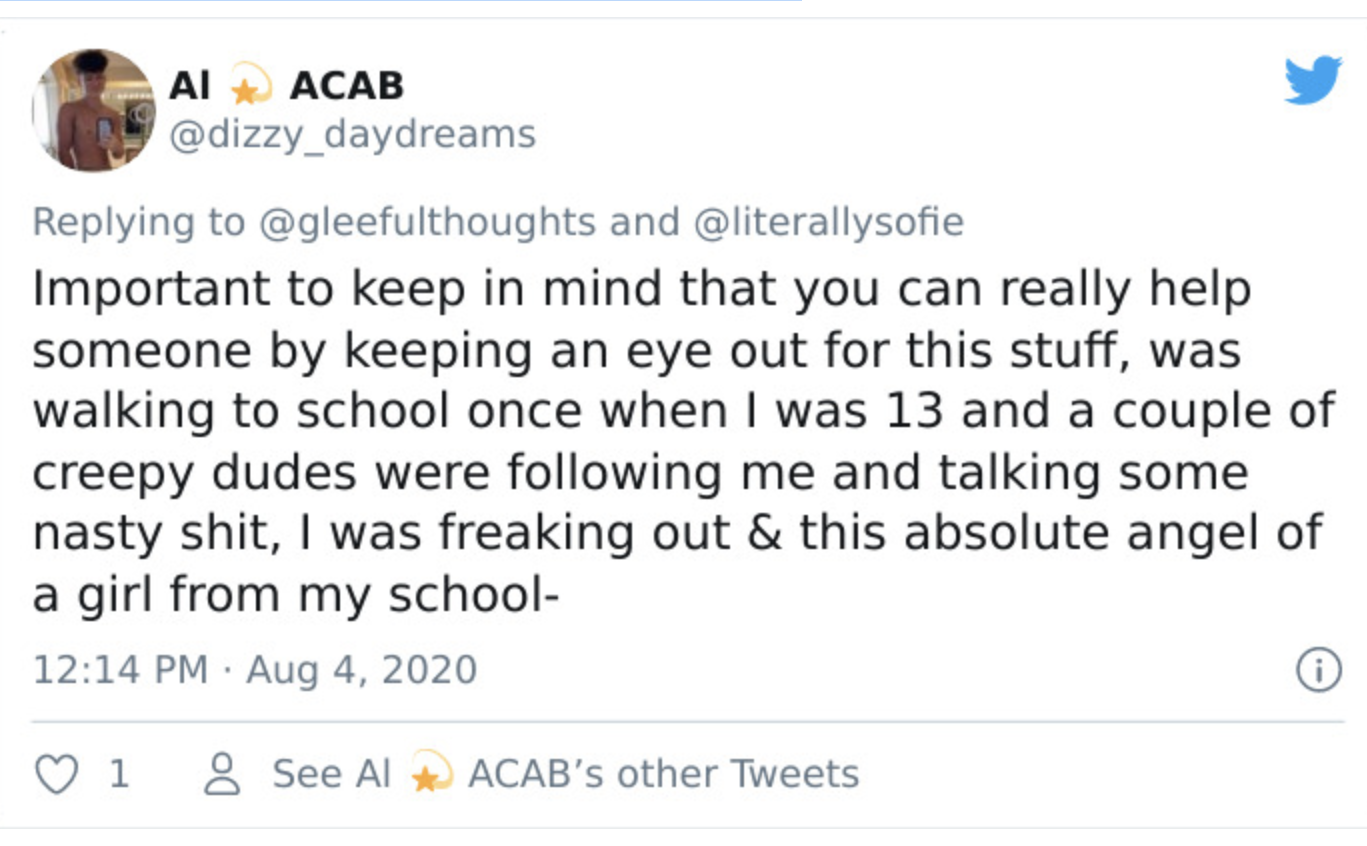 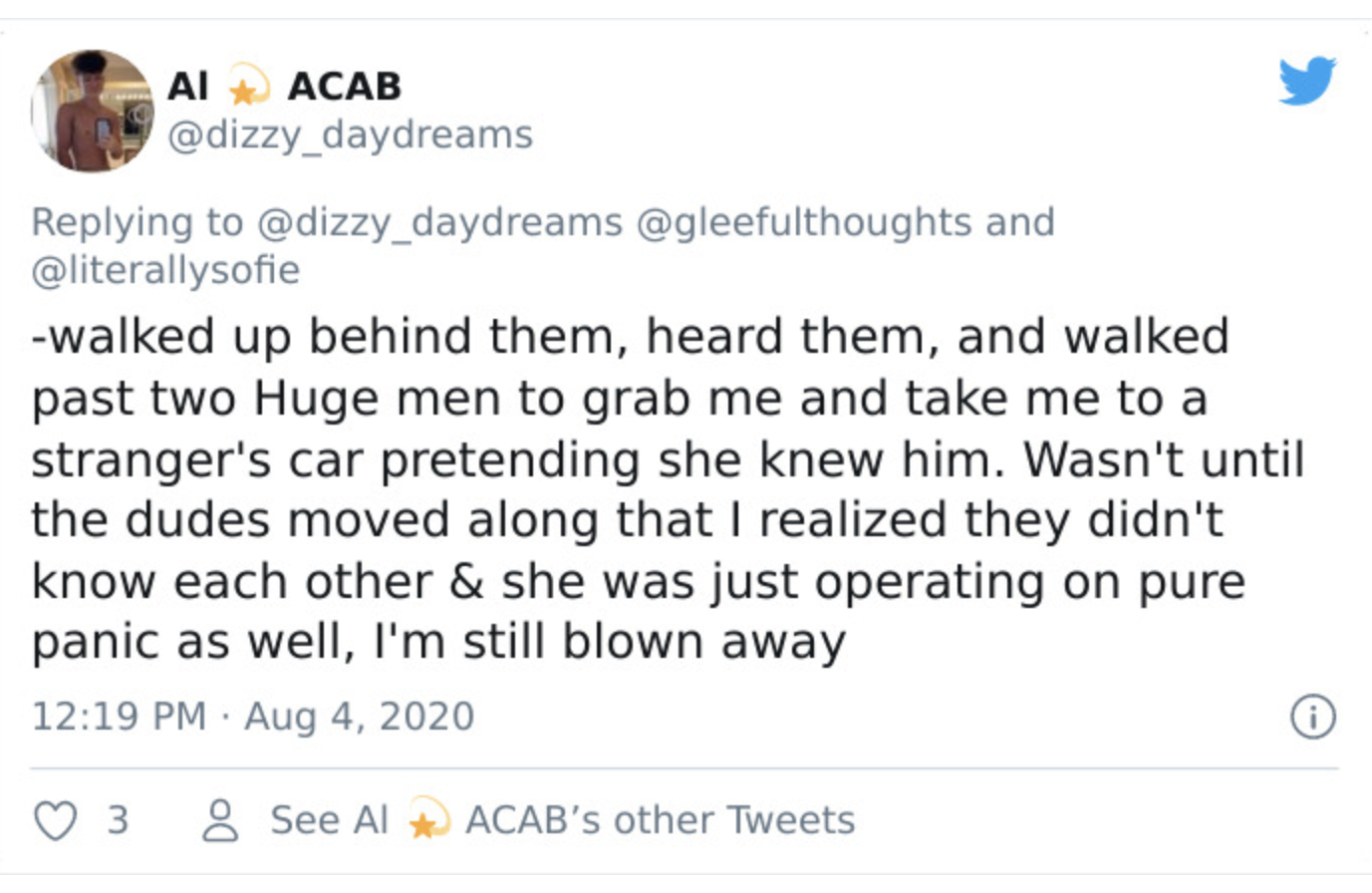 Al ACAB (@dizzy daydreams): Important to keep in mind that you can really help someone by keeping an eye out for this stuff, was walking to school once when I was 13 and a couple of creepy dudes were following me and talking some nasty shit, I was freaking out this absolute angel of a girl from my school walked up behind them, heard them, and walked past two Huge men to grab me and take me to a strangers car pretending she knew him. Wasn't until the dudes moved along that I realized they didn't know each other she was just operating on pure panic as well, I'm still blown away. 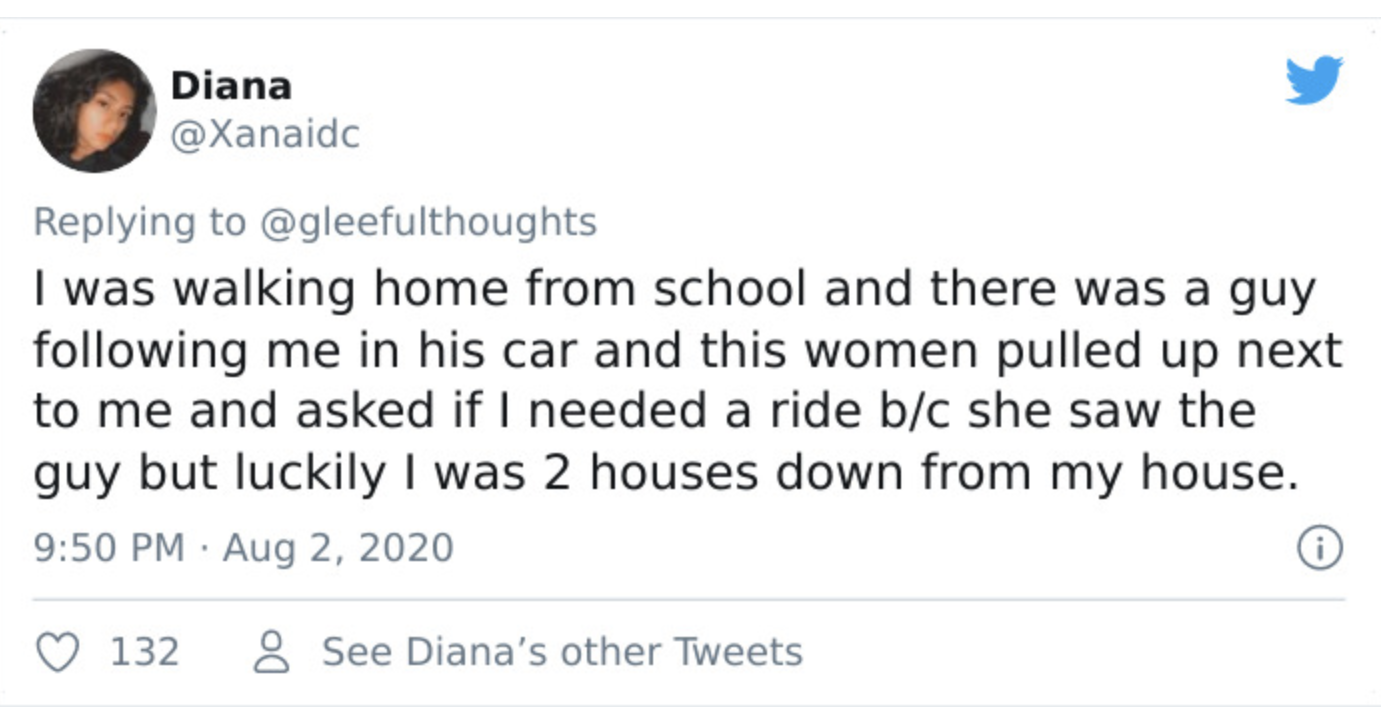 Diana (@Xanaidc): I was walking home from school and there was a guy following me in his car and this women pulled up next to me and asked if I needed a ride b/c she saw the guy but luckily I was 2 houses down from my house. 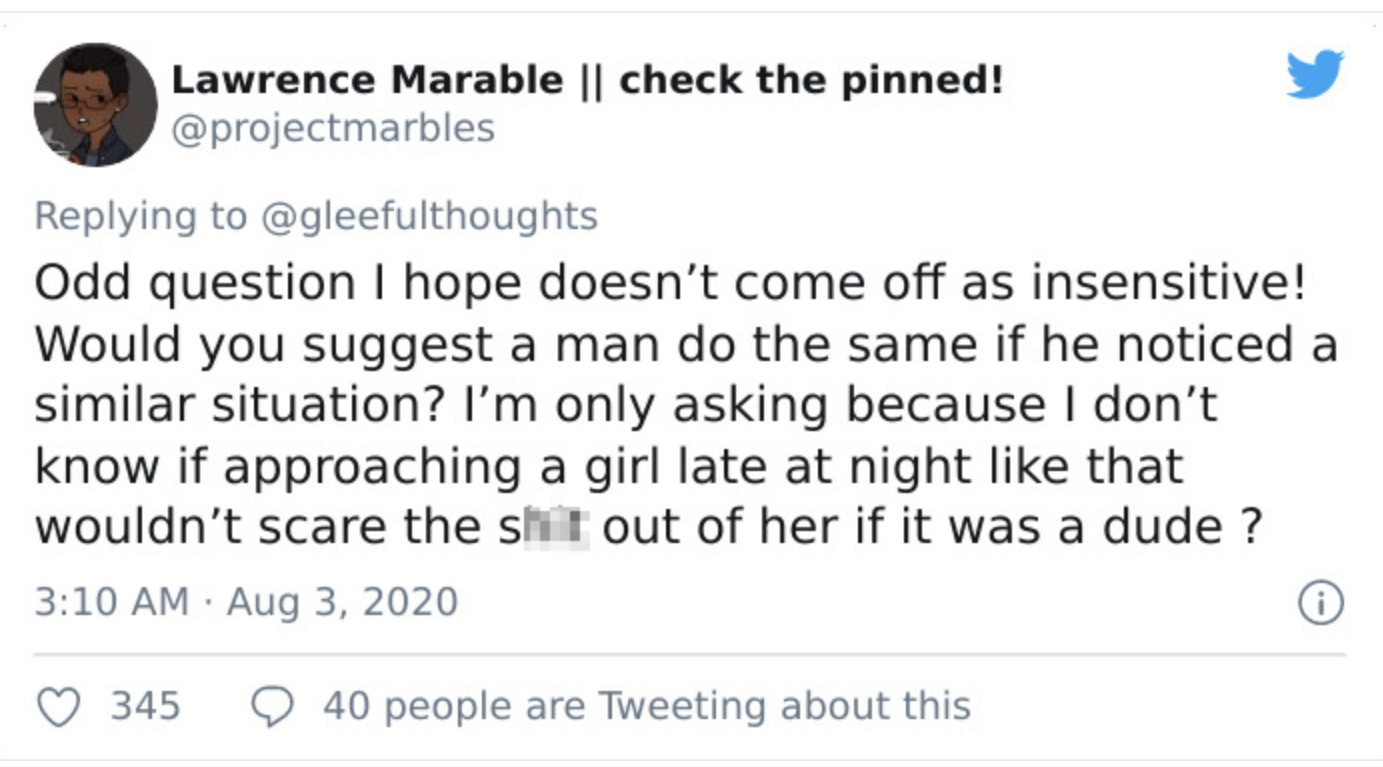 Lawrence Marable ll check the pinned! (@projectmarbles): Odd question I hope doesn't come off as insensitive! Would you suggest a man do the same if he noticed a similar situation? I'm only asking because I don't know if approaching a girl late at night like that wouldn't scare the shit out of her if it was a dude? 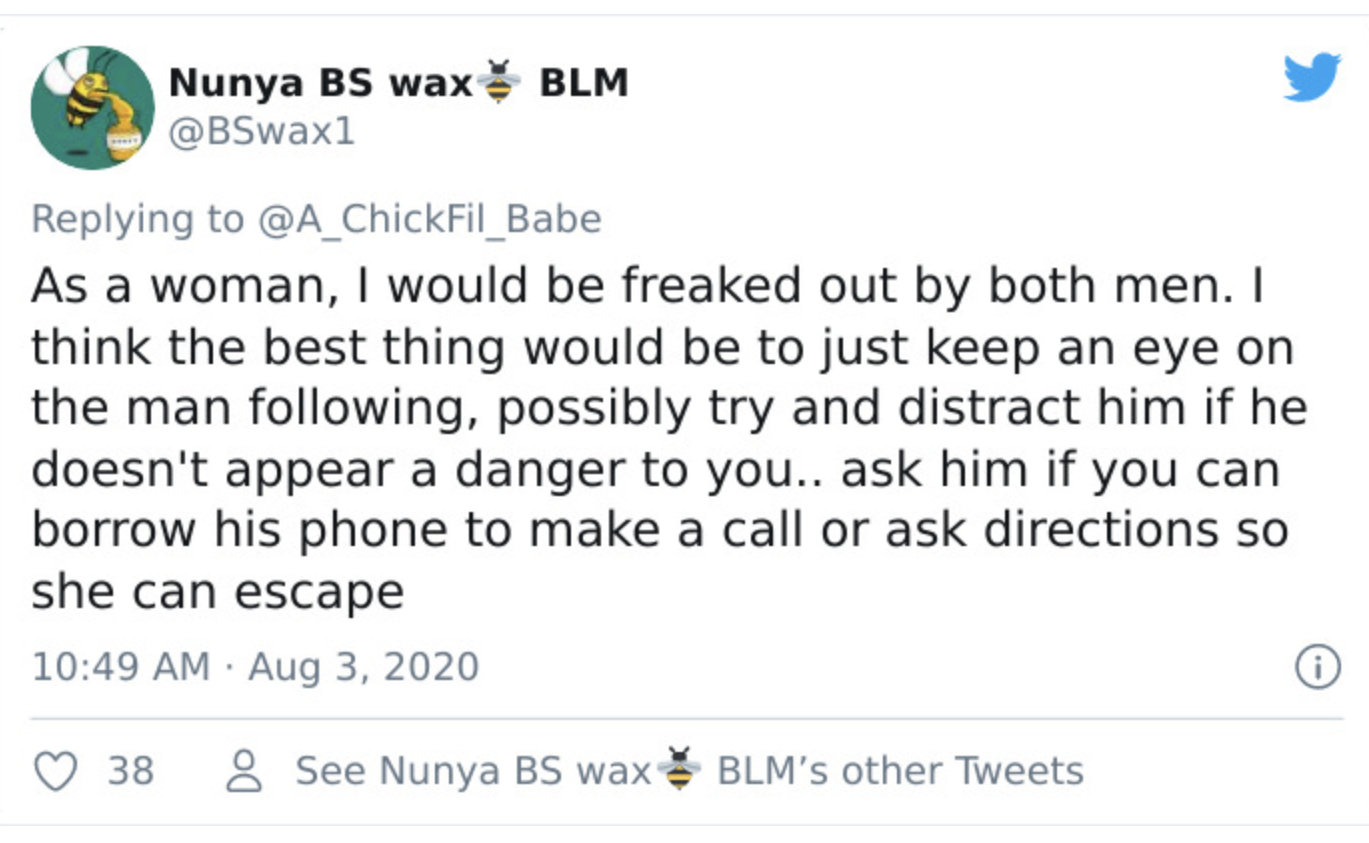 Nunya BS wax BLM (@BSwax1): As a woman, I would be freaked out by both men. I think the best thing would be to just keep an eye on the man following, possibly try and distract him if he doesn't appear a danger to you.. ask him if you can borrow his phone to make a call or ask directions so she can escape.