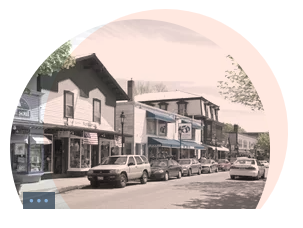 There's an often-overlooked money-saving strategy for people who like change or tend toward the adventurous, and it involves relocating to a small town.

Everyone knows New York, Washington D.C., San Francisco, and Los Angeles carry a high cost of living. Rent in those cities is among the highest in the nation, and homeownership is out of reach for many.

The Downside of Large-City Living

You don't need to live in a major metropolitan area along one of the coasts to experience the budget-busting impact of high costs. Inland cities like Chicago, Atlanta, and Denver also have relatively high costs of living as compared to many small towns dotted across the nation's landscape.

Major cities offer many career benefits, which offer the potential to earn a higher income, but this benefit depends on your industry.

If you're a software engineer, model, dancer, journalist, or programmer, living in a major city might give you the best chance at career success. On the other hand, if you're a construction worker with a stay-at-home spouse, a small town might just be the budget-saving strategy that you need.

Small towns have plenty of great perks of their own to offer, and you may find they're a lot more affordable than a crowded city. Here are some of the reasons why small towns are great, budget-friendly places to live:

You might also find that, in addition to these benefits, small-town living reduces the amount of stress in your life. Smaller towns have less noise and business, and you'll probably have a very short commute to work. Other benefits, such as greater job security, may only exist for people in certain fields, but small-town companies often have stronger ties with their employees and turnover is less than in the "big city."

Heading From behind the Coronavirus Mask, an Unseen Smile Can Still Be Heard Emotion researcher Ursula Hess explains why…