You’ve probably heard the phrase on television, seen it in a magazine ad or even contained within the title of a James Bond movie. Of course, we’re talking about the phrase, “A diamond is forever“. But where did this phrase originate? More importantly, is it true? Does a diamond really last forever?

Origin Of The Phrase

Until the late 1800s, diamonds were incredibly scarce with the total world production hovering around a few pounds per year. At the time, diamonds were mainly found in the jungles of Brazil and in a few key riverbeds in India in quantities not really suitable for large scale mining operations. All of this would change in 1867 when massive deposits of diamonds were discovered in South Africa. The world’s diamond production increased more than tenfold in the following decade.

Due to their rarity at the time, diamonds were incredibly valuable.carat, color, clarity, cut If these newly discovered diamond mines led to the mass production flooding the market, then the price of a diamond would drop significantly due to supply and demand. So the largest mining company at the time strictly controlled the distribution, and in 1947, devised a way to keep people from reselling the diamonds they already had; tie it in to institution of marriage, matrimony, and love.

At the time, the general public believed diamonds were a luxury for the ultra-wealthy. Most women would rather have their future husbands spending money on a new family car, down payment for a house or appliances for their household — anything but jewelry. An advertising agency contracted by De Beers (N.W. Ayer & Son) embarked on a massive campaign to change that image. They went about convincing people that if you were getting married, you had to have a diamond engagement ring. They were so successful that their manufactured tradition still persists to this day.

Coined by Frances Gerety, the slogan “A diamond is forever” meant that their diamonds represented your eternal love and affection for your significant other. They became the embodiment of a person’s commitment to one another which helped to keep people from reselling them. And so, the engagement ring which had been falling out of popularity due to the great depression saw a renewed vigor. By 1951, 80% of brides in America had a diamond engagement ring and that percentage has stayed somewhat consistent ever since.

So Does A Diamond Actually Last Forever?

The short answer is “yes”. On timescales that humans are familiar with, a diamond will last practically forever.Diamond degrades into Graphite Diamonds are an allotrope of carbon and their atoms are aligned in a cubic lattice which is called a diamond cubic. This configuration is considered “metastable”. A diamond’s molecular structure is incredibly robust and unless the diamond gets really, really hot, it will retain its structure indefinitely. 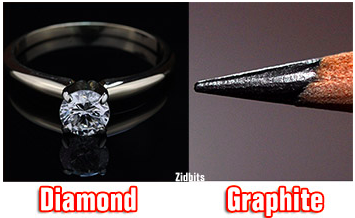 The long answer is a bit more tricky. On timescales that are beyond our comprehension, things play out a bit differently for diamonds. Eventually, all things degrade and decay due to entropy. Diamonds are not immune to this process as they eventually degrade into graphite. That’s right, diamonds decay into the same substance that is in the middle of your #2 pencil. Think of the process like a huge block of ice in the center of a freezer where the temperature is only one billionth of a degree above freezing. While the block of ice would melt eventually, it would take an unimaginably long time. A small diamond, like the kind found in an standard size engagement ring, would take billions of years or more to totally convert itself into graphite. While diamonds don’t technically last forever, they will outlast us, our planet and perhaps most of the universe.