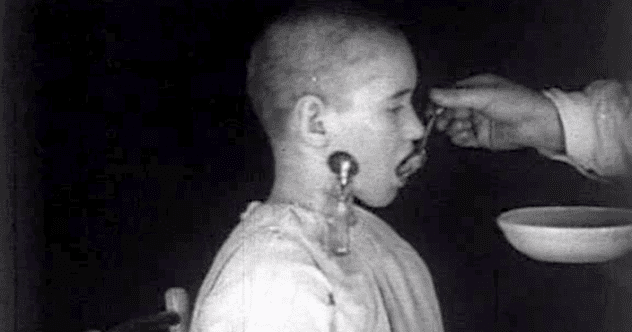 The mad Russian scientist’s mind control experiments on helpless victims is as classic a horror trope as they come. Those mad scientists do not usually get the Nobel Prize though. Ivan Pavlov is the exception that proves the rule.

Though Pavlov is most famous for conditioning dogs, that is not where his experiments were destined to end. A pupil of Pavlov, Nikolai Krasnogorsky, extended his experiments to humans. Acquiring subjects from the local orphanage, he had a group of young children he could easily manipulate without the burden of getting any clearance from their parents.

Repeating the set-up from his mentor’s famous dog experiments would have been impossible. Human beings are less willing than dogs to eat on cue. Bound with leather straps and metal head gear, the children’s mouths were locked open. Devices hooked inside the mouth measured their pooled saliva. An electronic pad hit their wrist whenever food was about to be distributed. The kids were force-fed both cookies and foul food. Their reactions to the different samples were recorded.

Though highly unethical, the research furthered the scientific understanding of conditioning on humans. Unlike Pavlov’s dogs, humans were less susceptible to slight changes in the stimuli. Through their suffering Kransngorsky’s children laid the groundwork for the modern theory of cognitive behavioral therapy. 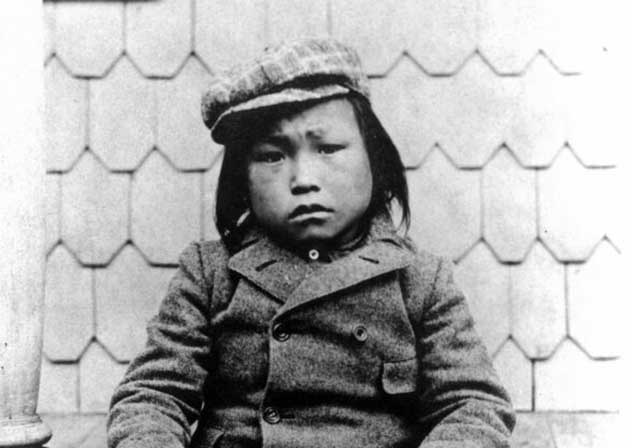 Robert Peary is best known today for his excursions to the North Pole in 1909. By that time, Peary and his crew had already spent years researching the Arctic. In September 1897, he sailed to New York accompanied, likely unwillingly, by six Eskimos from Greenland. The American Museum of Natural History was scheduled to perform physicals on them. Among the six were Minik, a 7-year-old boy, and his father, Qisuk.

Living as an attraction, visitors gawked at Minik and Qisuk in the Arctic exhibit. Unaccustomed to the germs in New York, four, including Qisuk, promptly died. Another left for the Arctic shortly after. Hundreds of miles from home, Minik Wallace was left alone. The museum threw Qisuk a funeral. Minik watched as his father was put to rest in the museum’s garden. In reality, the museum just buried a log wrapped with fur. Qisuk’s real body, along with the three other Eskimos, were dissected and bleached at Bellevue Hospital. Just a few feet away from Minik’s own exhibit, his father’s corpse was put on display.

This was Peary’s common practice. He robbed Eskimo graves for their bones and property. The Museum would buy it. For years, Minik campaigned for the return of his father’s body. His requests were refused until Minik finally got Peary to listen by threatening to reveal that Peary had fathered two Eskimo children. Peary let Minik return to the Arctic.

Minik’s return was bitter sweet. He relearned his native language and married a fellow Eskimo. However, as the only country he ever truly knew, he longed for the United States and returned. In 1916, working as a lumberjack in Pittsburg, N.H. Minik died in the Spanish Flu epidemic. He was 28. 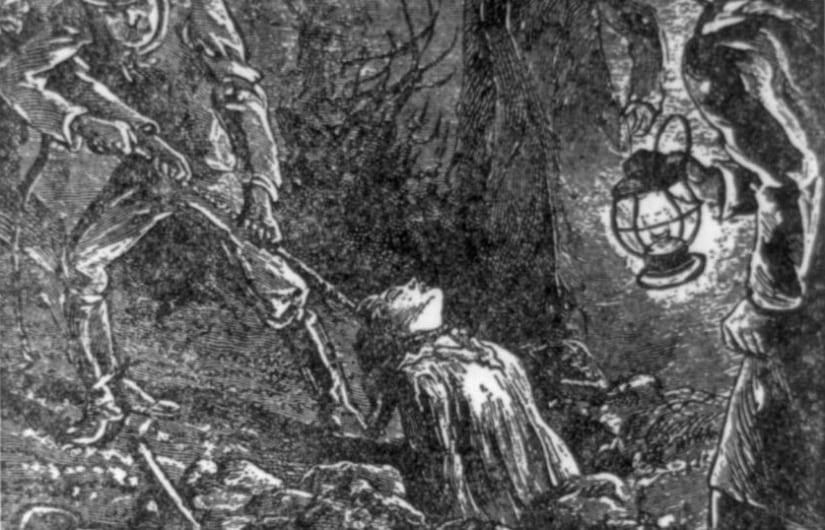 As a onetime Ohio congressman, John Scott Harrison’s own tenure in politics was very successful, which explains why so many people attended his funeral on May 25, 1878. During the ceremony, mourners noticed that somebody had robbed the nearby grave of Augustus Devin. Worried that John Harrison might have the same fate, his sons placed three large stones bound with cement on the casket. It took 16 men to lift the stones. As a further precaution, a guard was hired to stand watch for a month.

Curious as to the fate of Mr Devin and suspicious of the nearby medical school’s need for corpses to study, a search warrant was obtained for the Medical College of Ohio. Their search uncovered multiple macabre finds including a box of mangled body parts and the splayed corpse of a six month old baby. But more revolting still was a masked naked corpse hanging from a rope. They removed the mask revealing the face of John Scott Harrison. His body had been robbed less than 24 hours after his burial . . . despite all of the precautions.

But what of Augustus Devin? He was later discovered pickling in a barrel at the University of Michigan.

2、The Serial Killer in the London Blitz 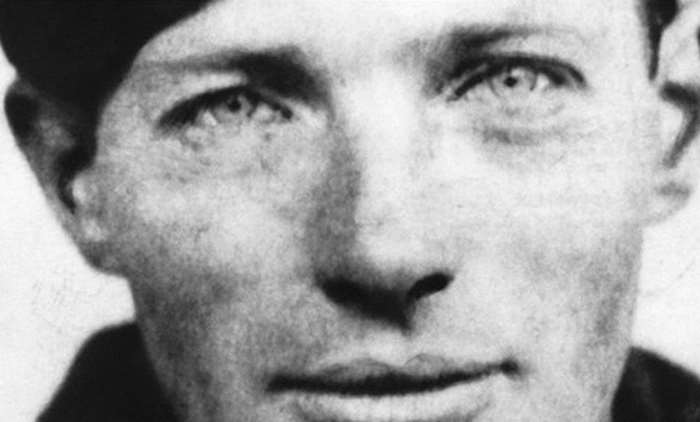 The London Blitz was a time when England boldly stood against the steady march of Nazism. Daily life in bomb-rattled London was a constant struggle. Gordon Frederick Cummins only made it worse.

In the cover of compulsory darkness, Gordon Frederick Cummins terrorized London in a six-day spree of murder and assault. A total of seven women were attacked. Four of them died. Cummins, who had enlisted in the Royal Air Force, was stationed at the Aircraft Reception Centre in northern London. Mainly attacking prostitutes, the city became his hunting ground for a week.

His first victim Evelyn Hamilton was sexually assaulted, robbed, strangled, and discarded in a gutter. Barely twenty-four hours later, Evelyn Oately’s slashed body was discovered. Next to her disfigured corpse was a can opener used in the attack. A fingerprint on the can opener’s handle was recovered. The next day, Margaret Florence Lowe’s body was found with her organs ripped out of her abdomen. And then, for the fourth day in a row, police found another dead prostitute, Doris Jouannet.

To become a horror cliché, Cummins waited a day to attack on Friday the 13th. Unlike Jason Voorhees, Cummins did not kill anyone that night. 32-year-old Mary Haywood was saved when a night porter shone his flashlight on Cummins in the middle of an attack. During the scuffle, Cummins left his service respirator behind as he fled. The police traced the serial number back to Cummins. Matching Cummins’ prints to the one on the can opener, Cummins was sentenced to death. The newly dubbed “Blackout Ripper” was executed on the 25th of June, 1942. 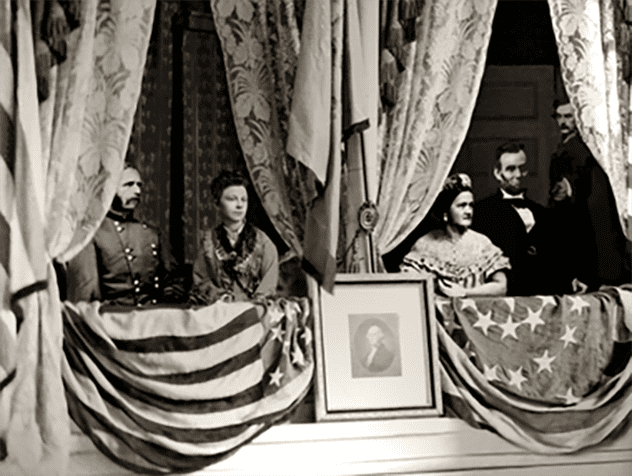 The Lincoln assassination was one of the saddest events in United States history. High-ranking members of the American government including Vice President Andrew Johnson and Secretary of State William Seward were targeted that night by Booth’s co-conspirators. One unintended victim intended was not: Clara Harris. A tangential involvement with the Lincoln assassination led to her death too.

Clara Harris was not even supposed to be at Ford’s Theatre that April night in 1865. She and her then beau major Henry Rathbone attended at First Lady Mary Todd Lincoln’s request. Following the recent victory of the Civil War, the theatre-goers were in a celebratory mood. But, as history well knows, the celebration was cut short when John Wilkes Booth barged into the president’s box and shot him in the head. Trying to apprehend the assassin, Rathbone grabbed Boothe’s arm but Booth stabbed him. With the bloody dagger still in hand, Booth escaped.

Years later, Clara Harris and Henry Rathbone married. Unable to part with her blood-stained dress, Clara had preserved it behind a walled off closet. She believed it might summon Lincoln’s ghost. Spirits talked to Rathbone too. Guilt driven for not stopping the tragedy, Rathbone heard voices in the walls. They blamed him for Lincoln’s death and ordered him to avenge the fallen president. With a murder straight out of The Shining, Rathbone recreated the assassination on Christmas Eve in 1883. He shot Clara and stabbed himself with a knife. Clara died. He then attempted to attack his children before groundskeepers could pull him off. Henry spent the rest of his life in an asylum.

NATE YUNGMAN Normal history is already barbaric enough. Behind the wars, disease, and murders that everyone knows, are tales…