12 stunning images from past Mars missions 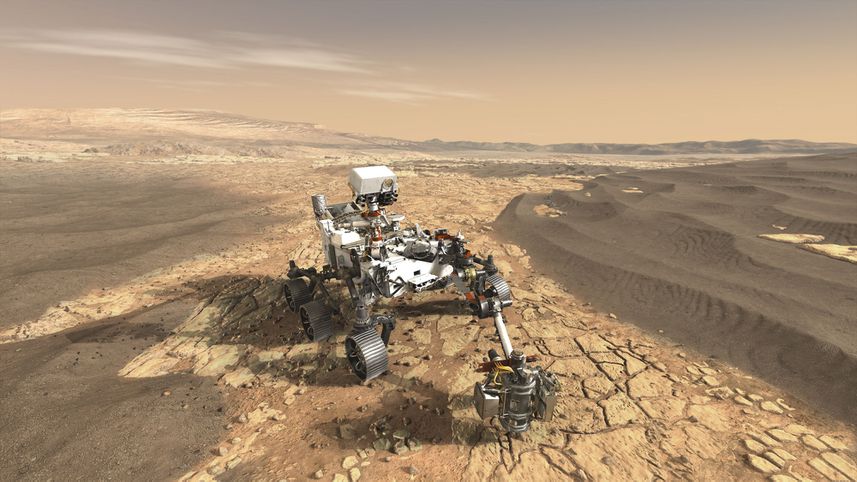 An artist’s rendering of Perseverance on Mars

Nestled in the nose cone of the Atlas V rocket, NASA’s Perseverance will take to space this week. The newest Mars rover has roughly the same dimensions as Curiosity—somewhere between the size of a golf cart and a small Jeep, and it weighs 2,260 pounds.

Perseverance aims to land on February 18, 2021, in Mars’ Jezero Crater. The structure once held an ancient lake, making it a prime location to search for traces of life. If all goes to plan, the rover will spend at least two Earth years exploring the red planet, collecting data all the while.

With 23 cameras and seven scientific instruments, Perseverance will conduct science on Mars with unprecedented complexity. NASA technology has come a long way—as we look forward to what Perseverance might accomplish, let’s look back on what we’ve already achieved on Mars. 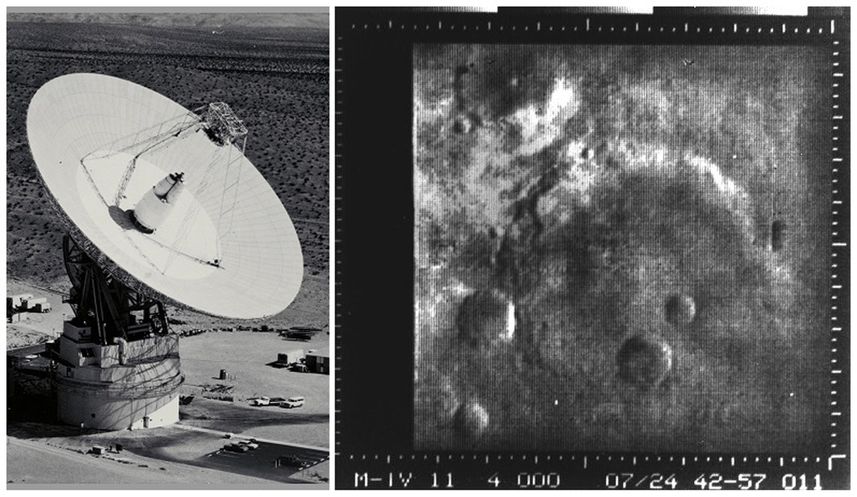 NASA’s 10-part Mariner program (1962-1973) aimed to look at the surfaces Mars, Venus, and Mercury. Mariner 4 became the first successful Mars flyby in 1964. It took 22 photos of the red planet, each of which took 10 hours to relay back to Earth!

July 20, 1976 marks the first time an operational spacecraft landed on Mars and completed its mission. (The first operational spacecraft to land on Mars was the Soviet Union’s Mars 3 that stopped transmitting after 14.5 seconds.) Viking 1 was a stationary lander, and operated for 2,307 earth days taking photos that helped us better understand the planet’s surface and atmosphere. 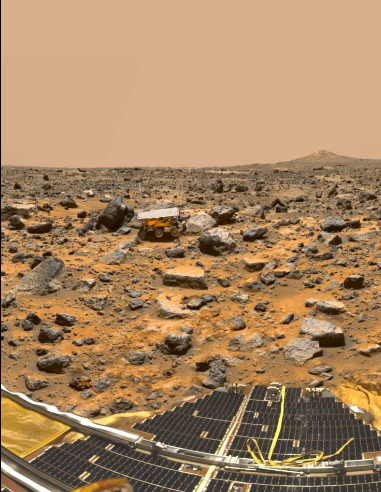 Landing on July 4, 1997, Sojourner accompanied the Pathfinder lander to Mars and became the first wheeled vehicle to rove another planet. Though its mission was only designed to last a week, Sojourner operated for 83 earth days and collected more than 17,000 images and 15 chemical analyses.

Opportunity, also known as MER-B and “Oppy,” landed in January, 2004 and operated until June, 2018—it’s the rover that has both operated the longest and driven the furthest. This picture is a mosaic of panoramic images by the rover and depicts where Opportunity’s heat shield hit the Martian ground. 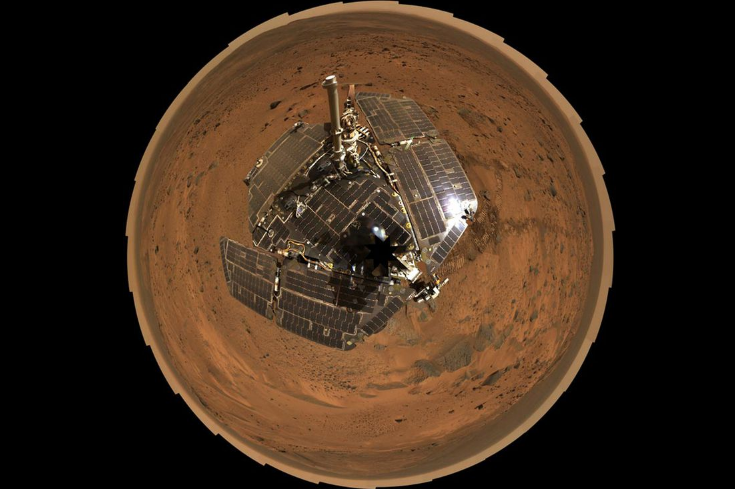 Hundreds of frames came together to make this enormous panorama image. Spirit, also known as MER-A, is Opportunity’s twin and also landed in January, 2004. It took this 360-degree, panoramic selfie in 2005 while perched on the summit of "Husband Hill" inside Mars' Gusev Crater. 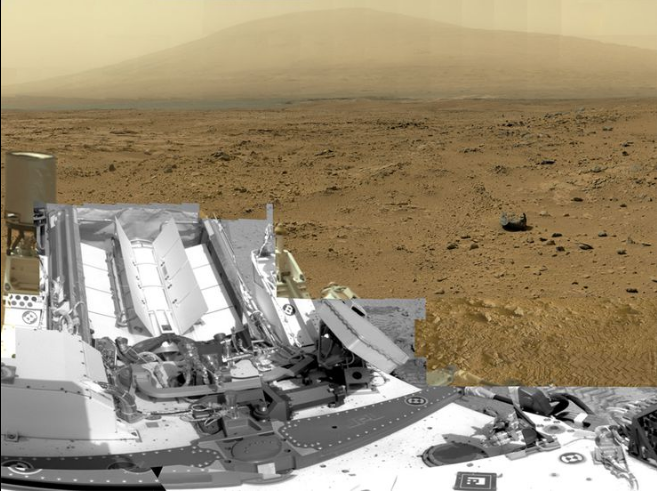 This 360-degree view of the “Rocknest” site—where the rover took samples of windblown dust and sand—was borne out of almost 1.3 billion pixels from almost 900 images taken in 2012. Curiosity has been in operation for almost eight Earth years now, and is the only functioning rover on Mars today. 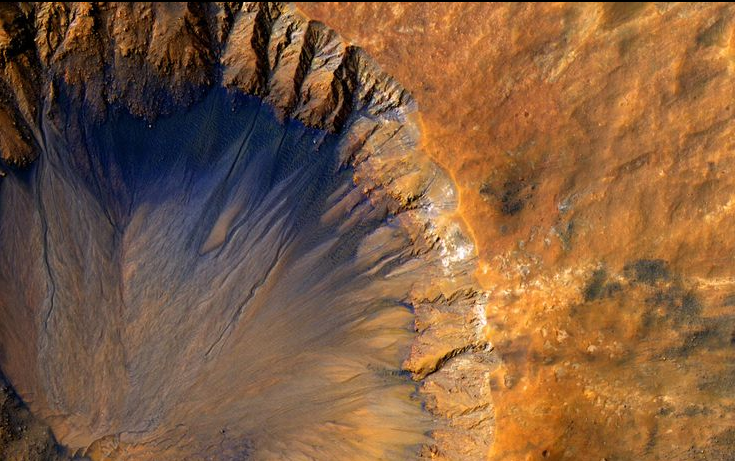 The Mars Reconnaissance Orbiter (MRO) has been in Mars’ orbit since March, 2006. It’s equipped with three cameras, two spectrometers, and a radar device that together capture an estimated 5,000 images per year. This one, snapped in 2015, shows a 1-kilometer wide crater in the Sirenum Fossae region of Mars. While NASA has not estimated an exact age of this crater, they do say that it must be quite new, at least on a geological scale. 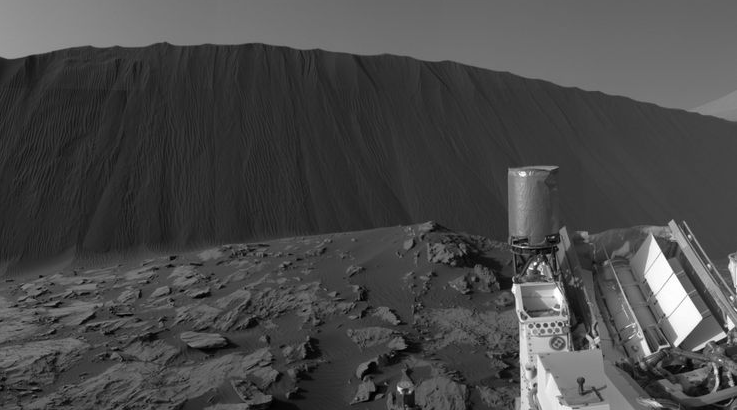 This is the downwind side of the “Namib Dune,” which stands at about 13 feet high. The site is part of the Bagnold Dunes, a band of dark sand dunes along the northwestern flank of Mars' Mount Sharp. Under the relentless Martian winds, these dunes migrate about a meter per Earth year and were snapped by Curiosity in 2015.

16 years of data collected by three different spacecraft (Mars Global Surveyor, Mars Odyssey, Mars Reconnaissance Orbiter) went into the making of this image, which maps out Mars’ gravity in incredible detail. By analyzing the gravitational pulls of the sun and Mars’ two moons, scientists could see tides shift in the Martian crust and mantle—confirming that Mars has a liquid outer core of molten rock.

Located on Mount Sharp inside Gale Crater lies “Squid Cove,” a rock formation with suspicious patterns of cracks. Scientists think these fractures are the result of 3 billion-year-old dried mud. If they’re right, these mud cracks are evidence of ancient Martian lakes that eventually dried up. 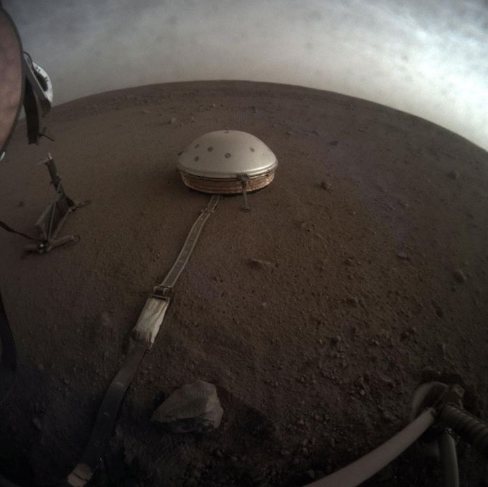 InSight is NASA’s youngest lander—it touched down on Mars near its equator in November, 2018. Its objective is to learn what lies beneath Mars’ surface by measuring seismic vibrations. In this image, taken in 2019, we see drifting clouds over Martian land during sunset.