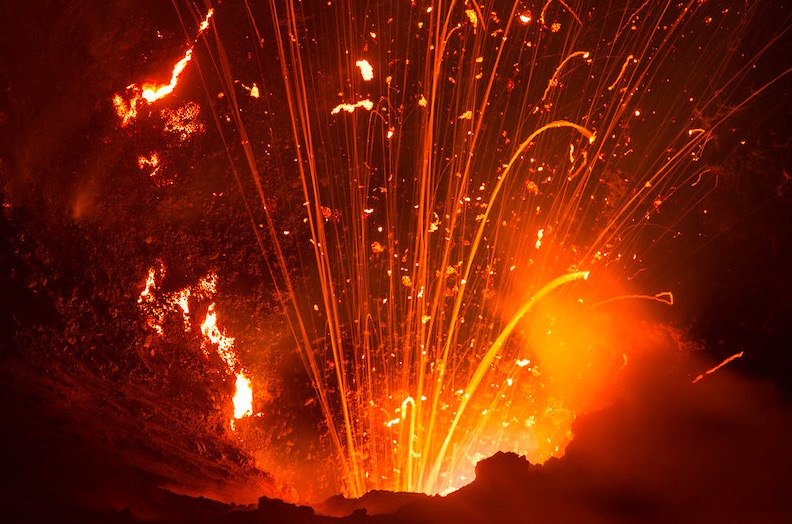 An international team of subsurface explorers from the University of Adelaide in Australia and the University of Aberdeen in Scotland have uncovered a previously undescribed 'Jurassic World' of around 100 ancient volcanoes buried deep within the Cooper-Eromanga Basins of central Australia.

The Cooper-Eromanga Basins in the north-eastern corner of South Australia and south-western corner of Queensland is Australia's largest onshore oil and gas producing region of Australia. But, despite about 60 years of petroleum exploration and production, this ancient Jurassic volcanic underground landscape has gone largely unnoticed.

Published in the journal Gondwana Research, the researchers used advanced subsurface imaging techniques, analogous to medical CT scanning, to identify the plethora of volcanic craters and lava flows, and the deeper magma chambers that fed them. They've called the volcanic region the Warnie Volcanic Province, with a nod to Australian cricket legend Shane Warne.

The volcanoes developed in the Jurassic period, between 180 and 160 million years ago, and have been subsequently buried beneath hundreds of meters of sedimentary -- or layered -- rocks.

The Cooper-Eromanga Basins are now a dry and barren landscape but in Jurassic times, the researchers say, would have been a landscape of craters and fissures, spewing hot ash and lava into the air, and surrounded by networks of river channels, evolving into large lakes and coal-swamps.

"While the majority of Earth's volcanic activity occurs at the boundaries of tectonic plates, or under the Earth's oceans, this ancient Jurassic world developed deep within the interior of the Australian continent," says co-author Associate Professor Simon Holford, from the University of Adelaide's Australian School of Petroleum.

"Its discovery raises the prospect that more undiscovered volcanic worlds reside beneath the poorly explored surface of Australia."

The research was carried out by Jonathon Hardman, then a PhD student at the University of Aberdeen, as part of the Natural Environment Research Council Centre for Doctoral Training in Oil and Gas.

The researchers say that Jurassic-aged sedimentary rocks bearing oil, gas and water have been economically important for Australia, but this latest discovery suggests a lot more volcanic activity in the Jurassic period than previously supposed.

"The Cooper-Eromanga Basins have been substantially explored since the first gas discovery in 1963," says co-author Associate Professor Nick Schofield, from the University of Aberdeen's Department of Geology and Petroleum Geology.

"This has led to a massive amount of available data from underneath the ground but, despite this, the volcanics have never been properly understood in this region until now. It changes how we understand processes that have operated in Earth's past."

The researchers have named their discovery the Warnie Volcanic Province after one of the drill holes that penetrated Jurassic volcanic rocks (Warnie East-1), itself named after a nearby waterhole), but also in recognition of the explosive talent of former Australian cricketer Shane Warne.

"We wrote much of the paper during a visit to Adelaide by the Aberdeen researchers, when a fair chunk was discussed and written at Adelaide Oval during an England vs Cricket Australia XI match in November 2017. Inspired by the cricket, we thought Warnie a good name for this once fiery region," says Associate Professor Holford.