Nurses are the coronavirus heroes. These photos show their life now 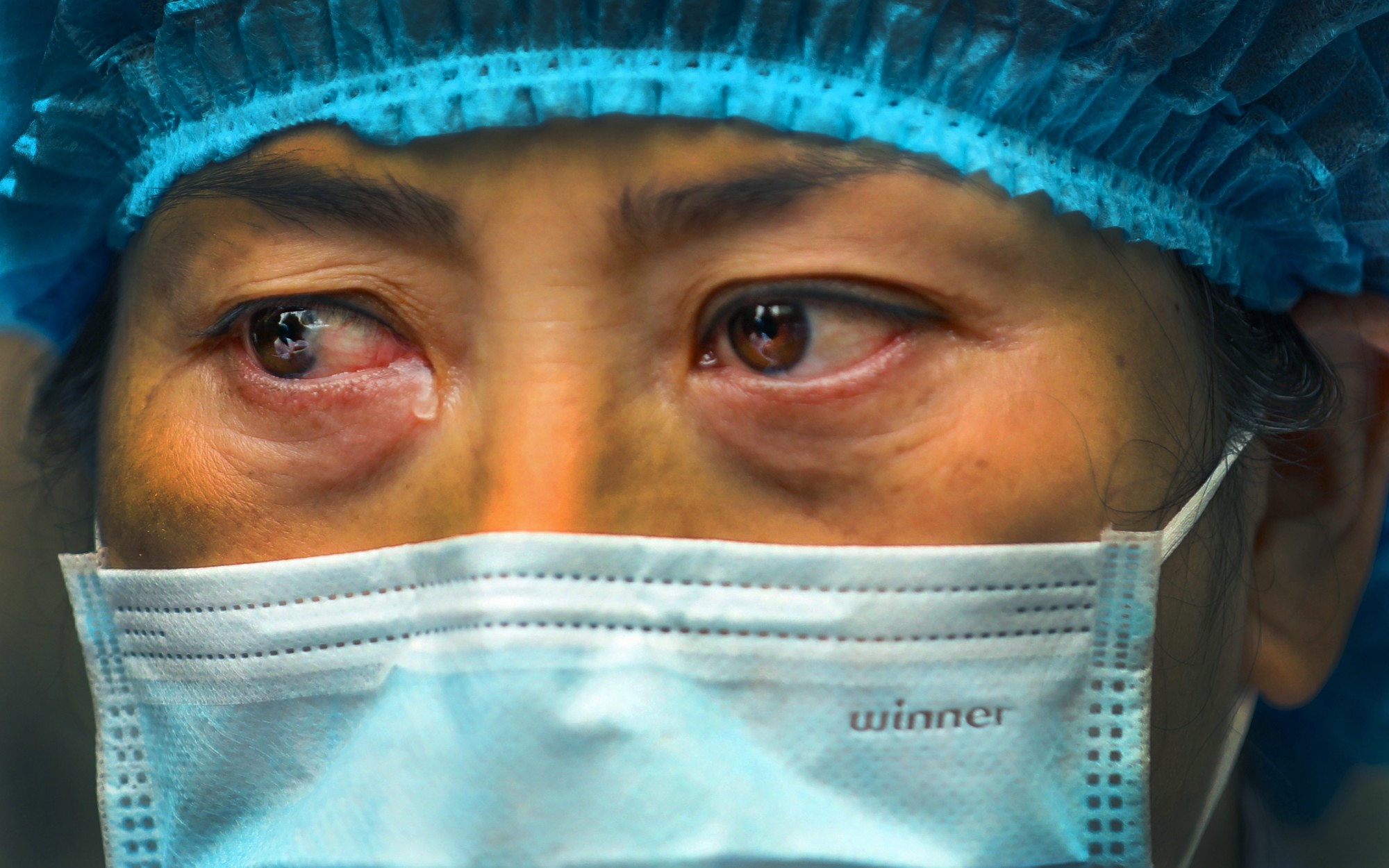 CHINA: A nurse sheds a tear while discussing the situation at Jinyintan Hospital in Wuhan in central China’s Hubei province, where the coronavirus outbreak began, on Feb. 13.(Barcroft Media / Getty Images)

The coronavirus is taking a serious toll on the doctors and nurses risking their lives while treating infected patients.

Moving in and out of negative-pressure rooms, putting on protective equipment and taking it off again, nurses are caring for patients who are severely ill and sometimes dying. They spend the greatest amount of time with the patients.

These nurses draw blood, obtain samples, provide oxygen, and devotedly tend to their patients’ needs. When a patient is placed in intensive care, it’s the nurses who do the mundane and the heroic to help the patient recover or die with a little more comfort.

Nurses are the underappreciated heroes of this crisis. Though they are usually the coolest of head in the room, they are now feeling the tremendous pressure of their situation.

Here we take a closer look at some of the brave men and women who are on the front lines battling this virus. 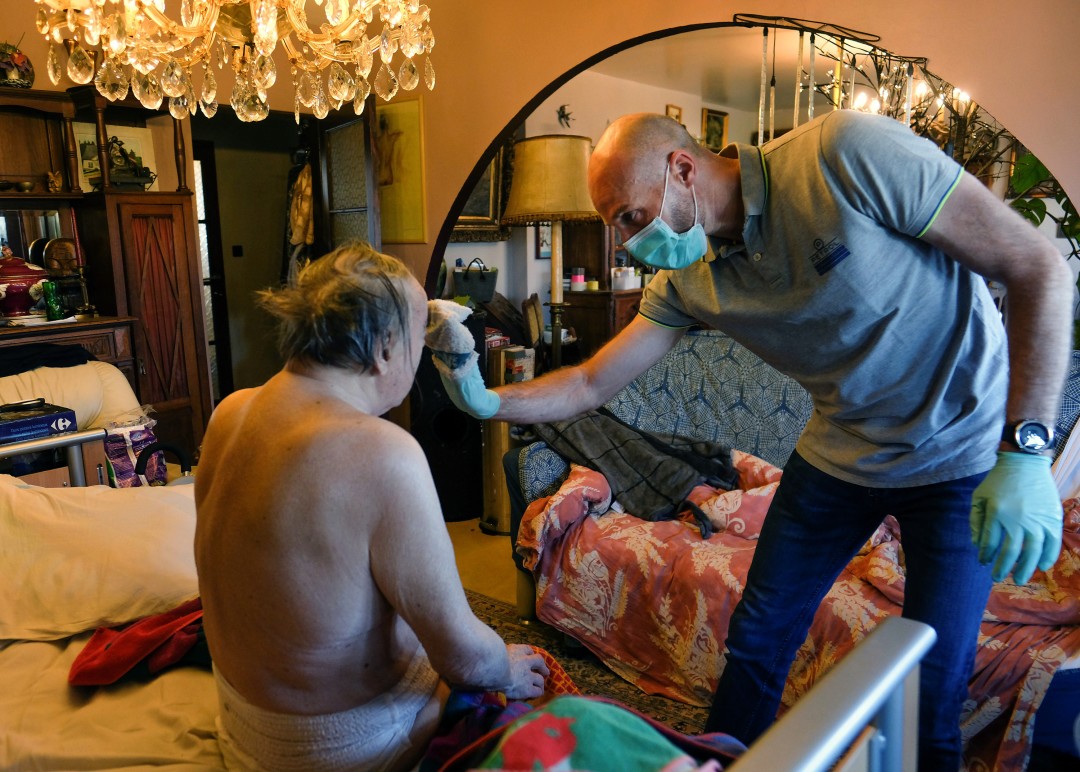 BELGIUM: Home nurse Christophe wipes the face of one of his patients in the city of Ciney on April 6. Christophe said he has received a box of 50 face masks from the Belgian government and no other personal protection equipment.(Oliver Hoslet / EPA/Shutterstock) 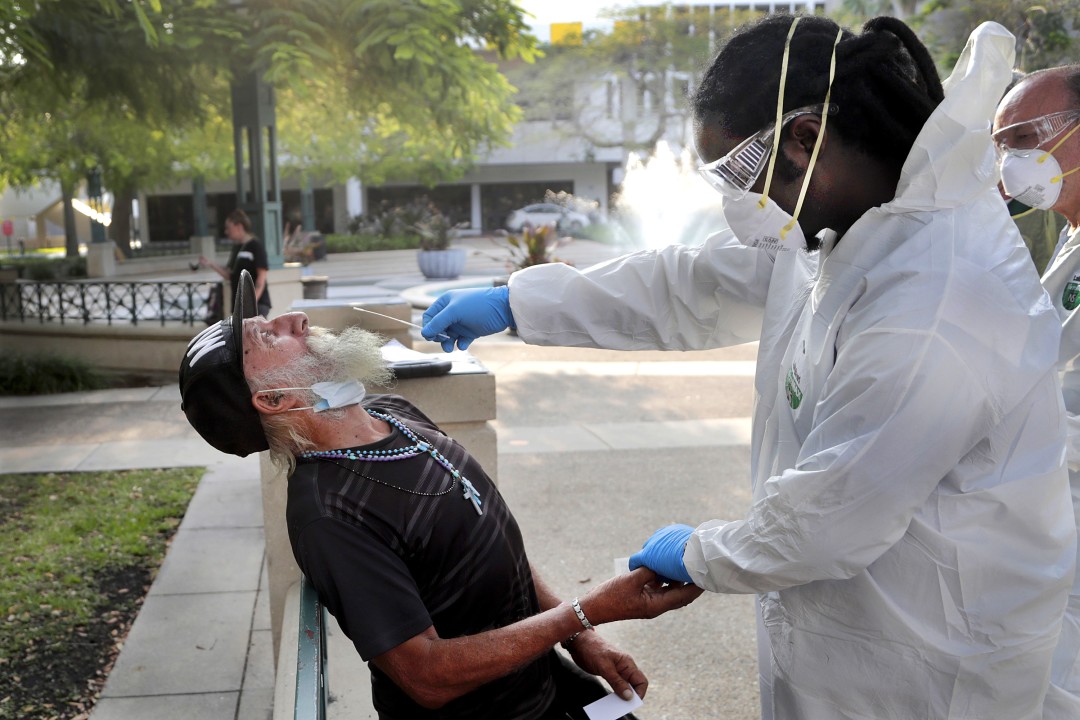 FLORIDA: Nurse practitioner Gregory Pierre holds the hand of Leonardo Toledo Martinez, who is homeless, as he is tested for COVID-19 in Miami on April 16.(Lynne Sladky / Associated Press) 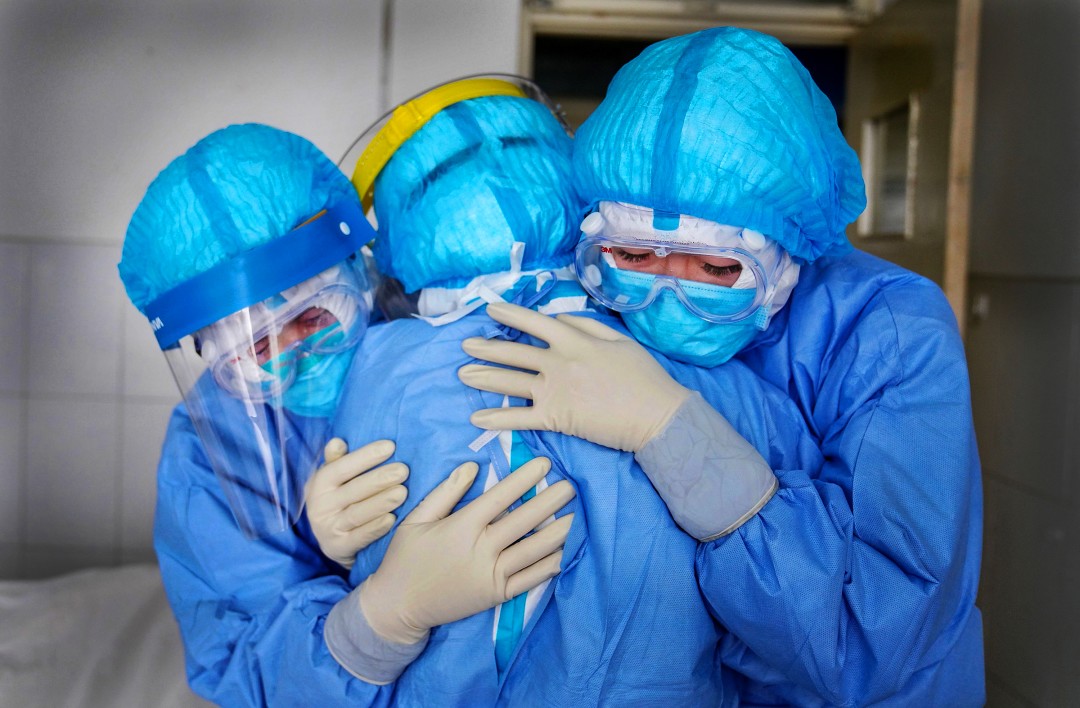 CHINA: Medical staff members hug one another in an isolation ward at a hospital in Zouping in Shandong province on Jan. 28. (AFP / Getty Images) 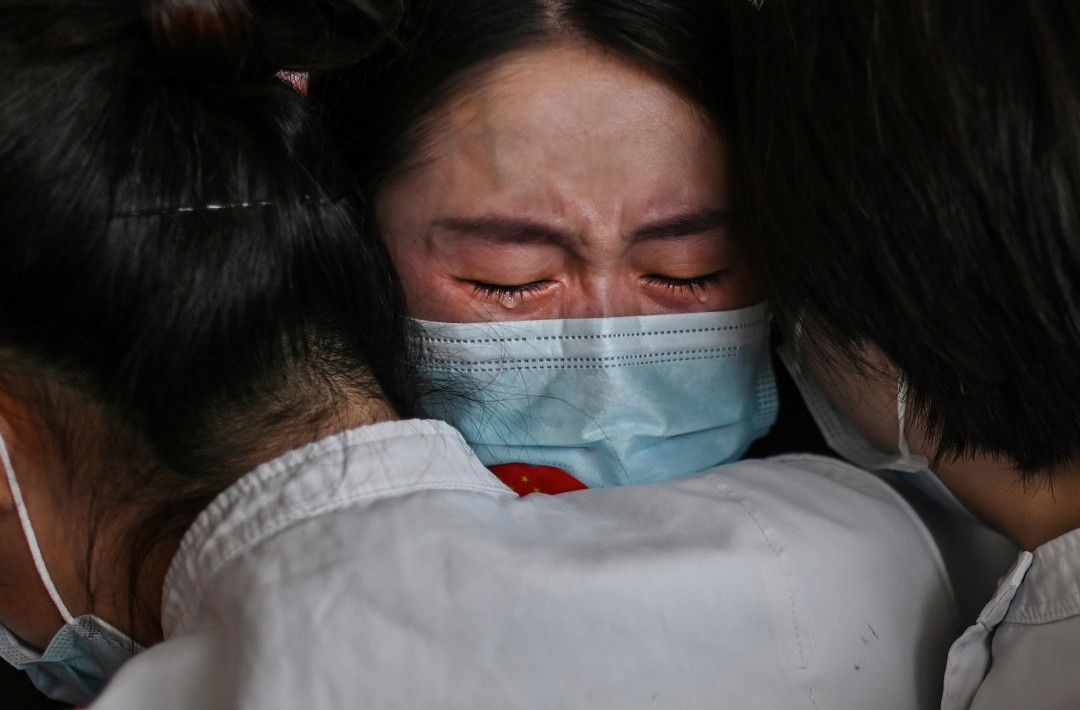 CHINA: Medical staff from Jilin province hug nurses from Wuhan they worked with during the coronavirus outbreak on April 8.(Hector Retamal / AFP/Getty Images) 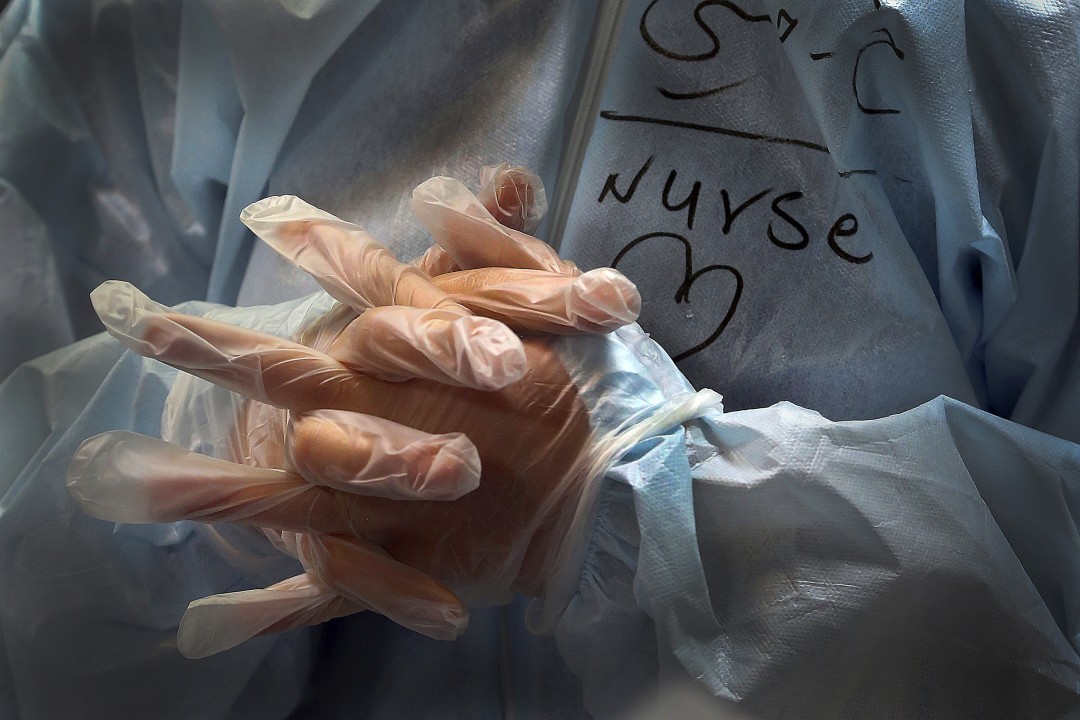 IRAN: A nurse wears protective gear in a COVID-19 ward at a hospital in Tehran on March 8.(Mohammad Ghadamali / Associated Press) 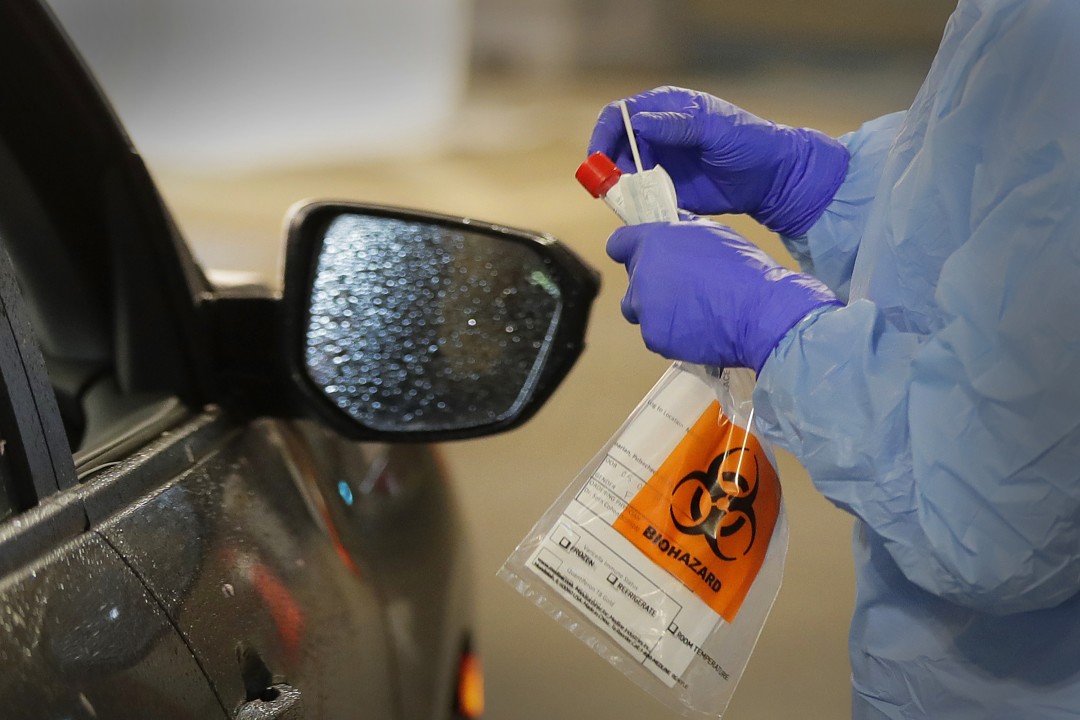 WASHINGTON: A nurse at a drive-up coronavirus testing station in Seattle holds a swab used to take a sample from the nose of a person in their car on March 13.(Ted S. Warren / Associated Press) 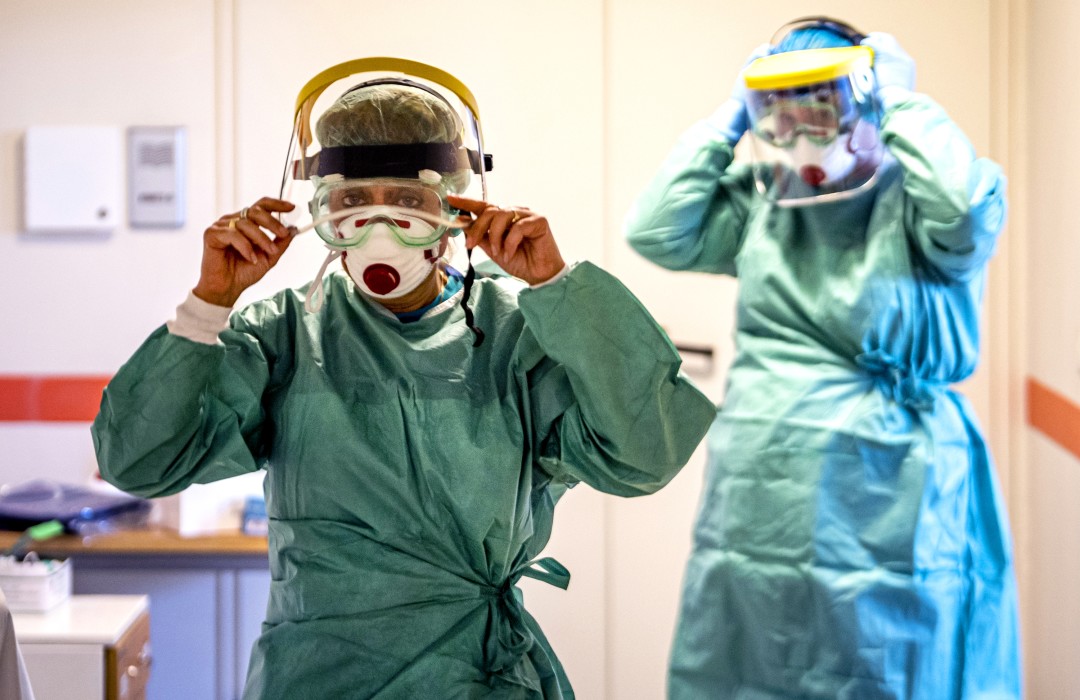 HUNGARY: Nurses gear up before treating COVID-19 patients at a hospital in Budapest on March 16.(Zsolt Szigetvary / Associated Press) 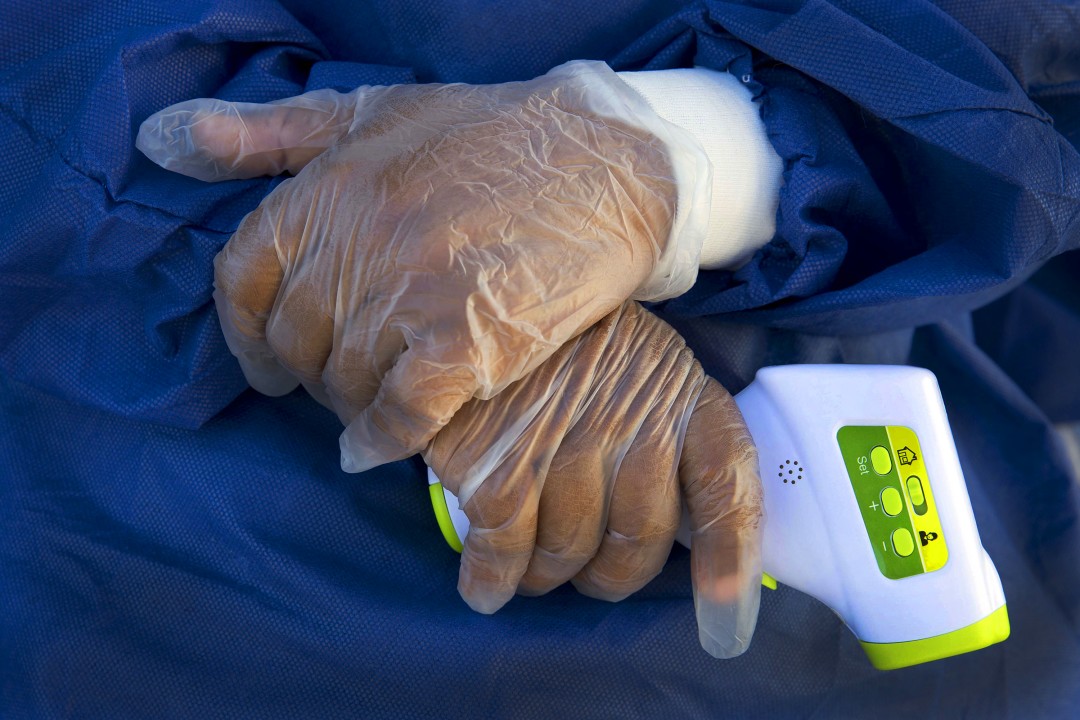 DOMINICAN REPUBLIC: A nurse holds a thermometer used to screen people crossing the border from Haiti on March 17 in the city of Jimani.(Dieu Nalio Chery / Associated Press) 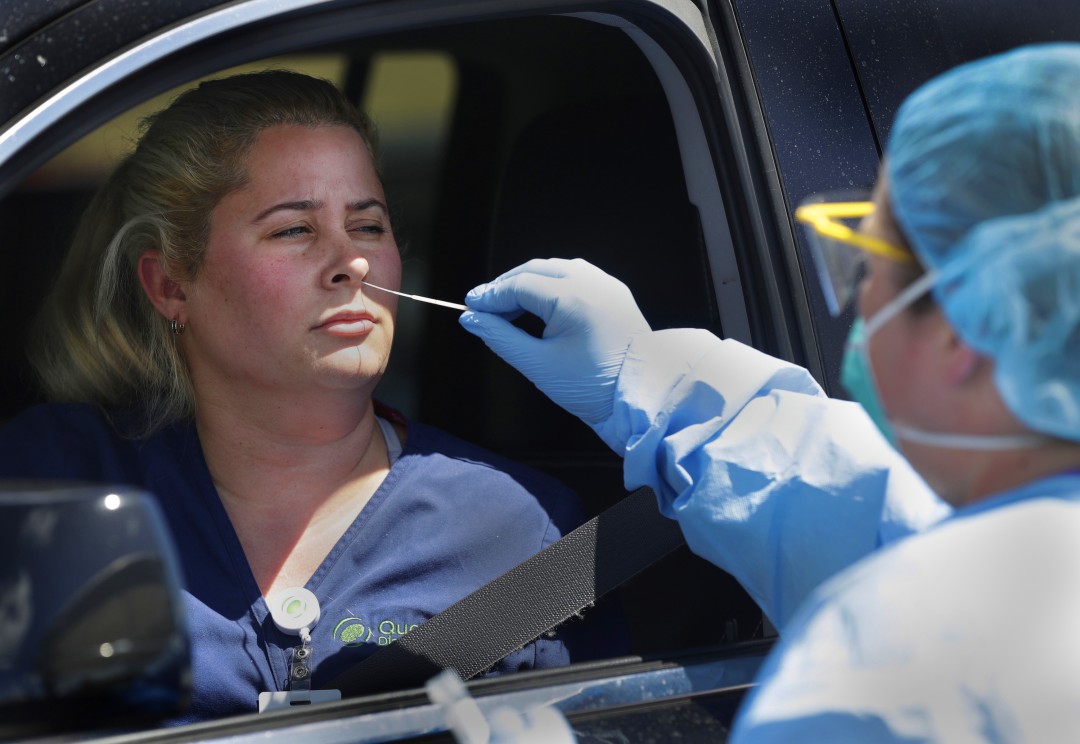 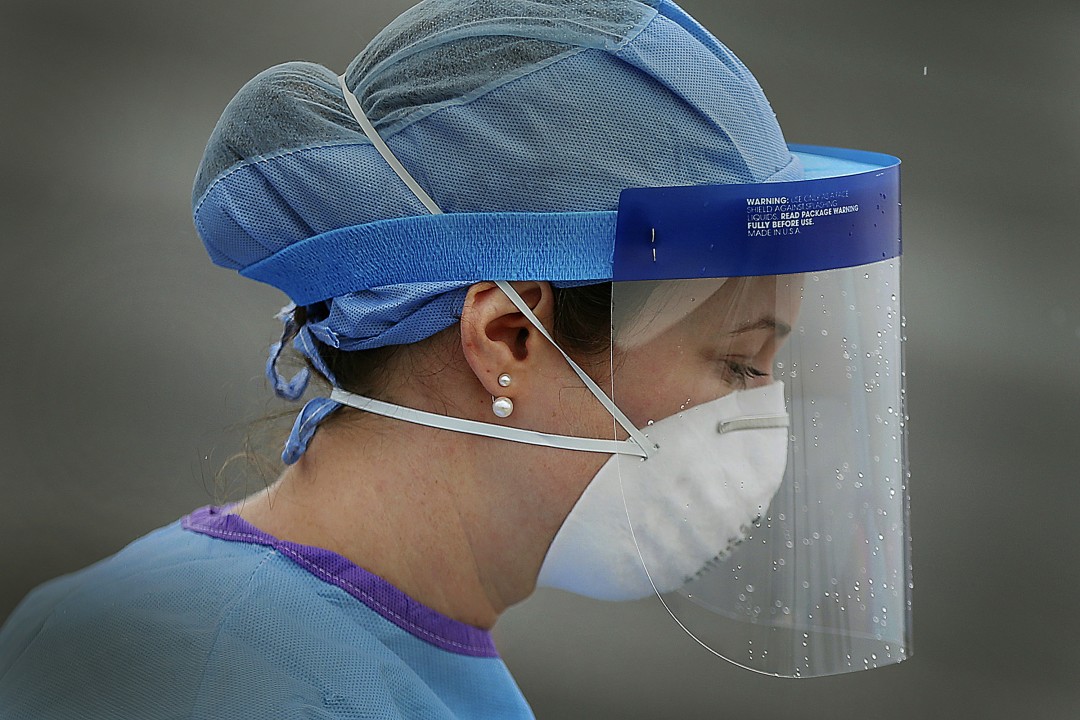 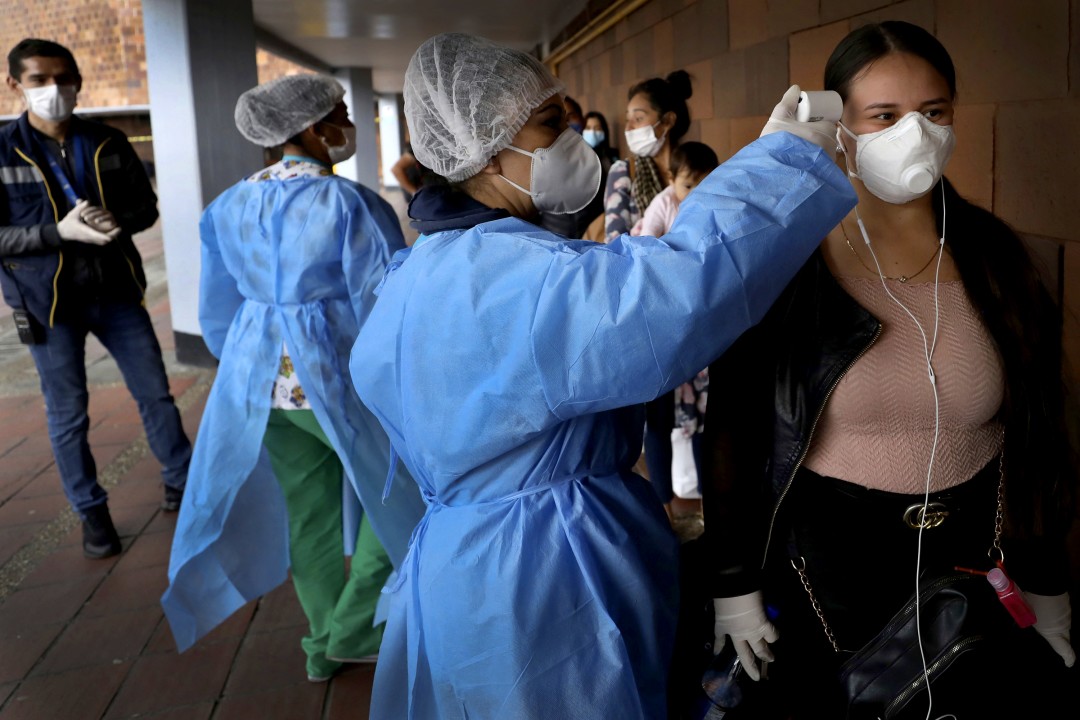 COLOMBIA: A nurse takes the temperature of a woman outside the main bus terminal in Bogota on March 24.(Fernando Vergara / Associated Press) 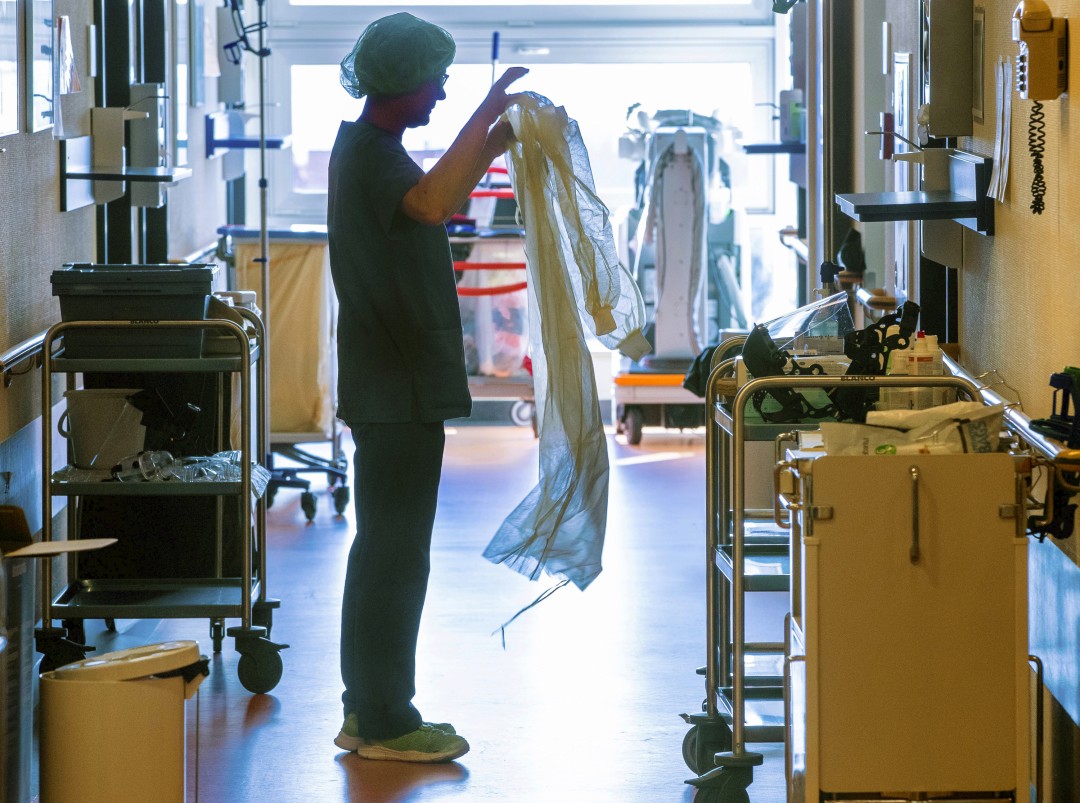 GERMANY: A nurse puts on a gown in the isolation ward for coronavirus patients at a hospital in Schwerin on March 26.(Jens Buettner / Associated Press) 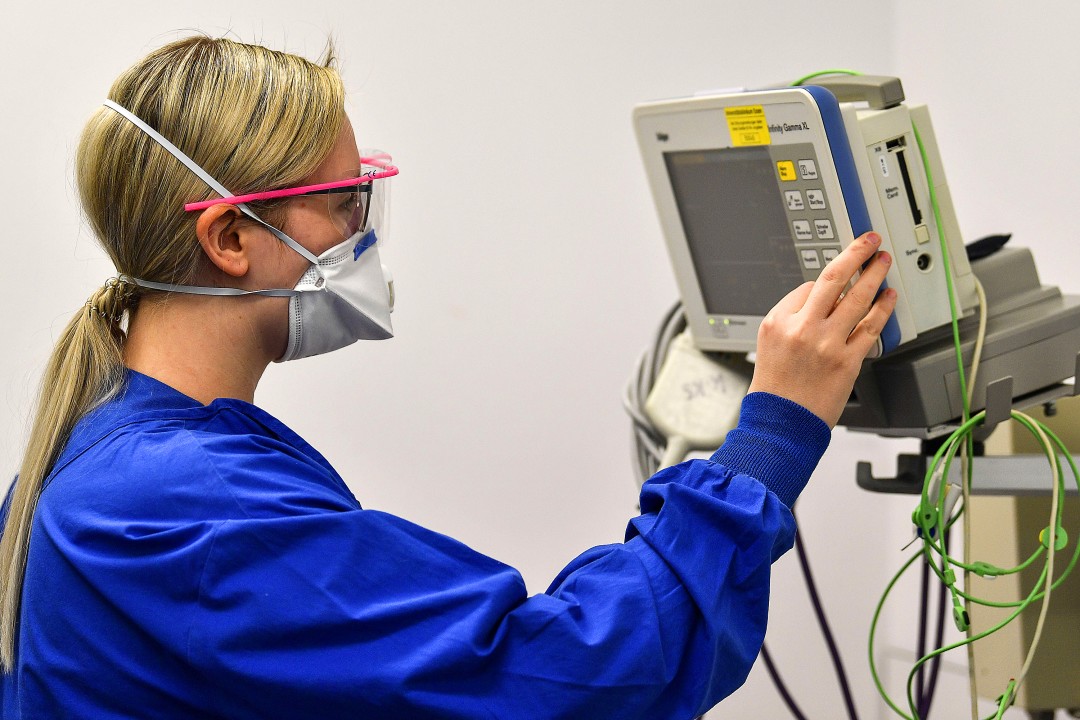 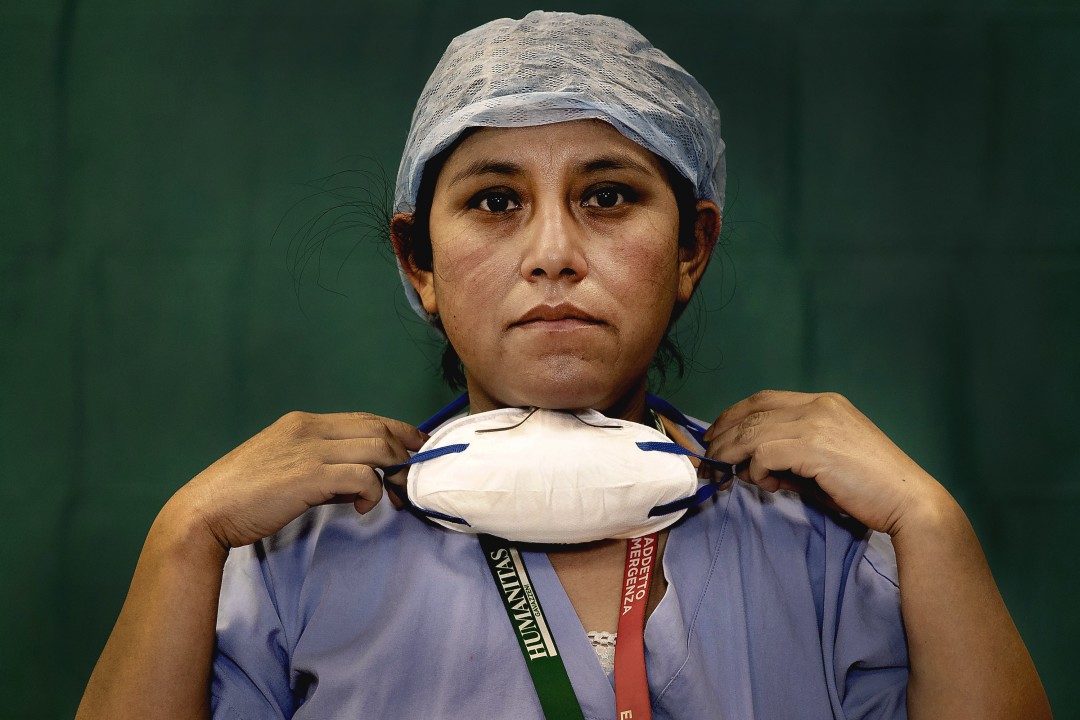 ITALY: Ana Travezano, 39, a nurse at the Humanitas Gavazzeni Hospital in Bergamo, removes her mask at the end of her shift on March 27.(Antonio Calanni / Associated Press) 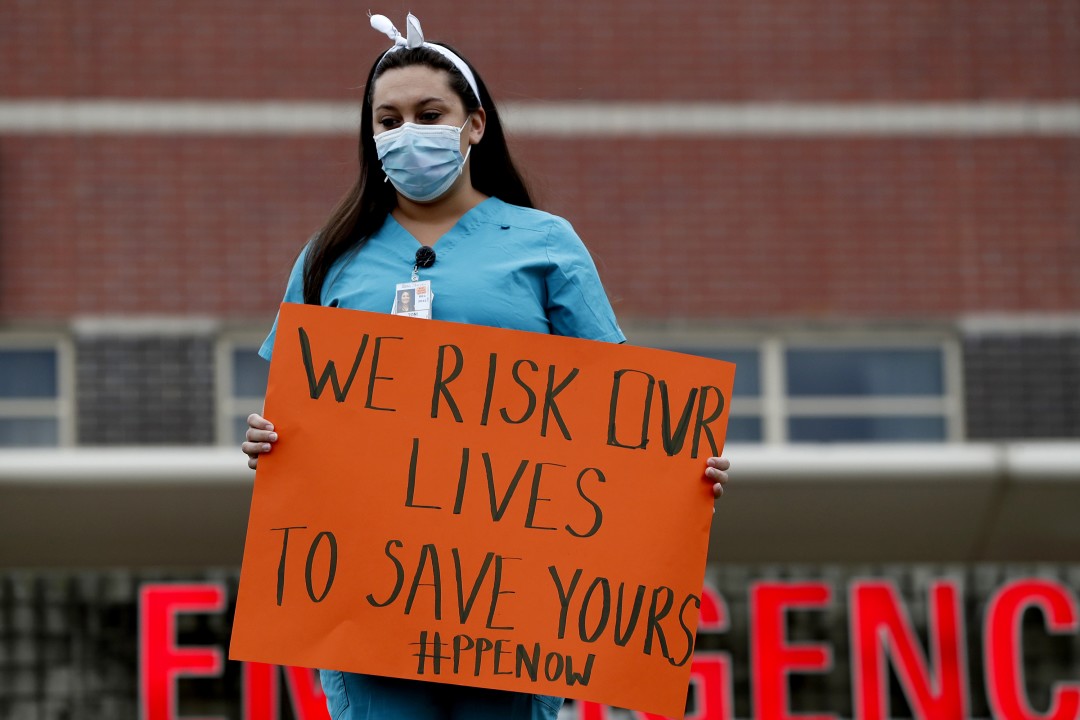 NEW YORK: A nurse holds a sign asking for more protective equipment outside the emergency entrance at Jacobi Medical Center in the Bronx on March 28.(Kathy Willens / Associated Press) 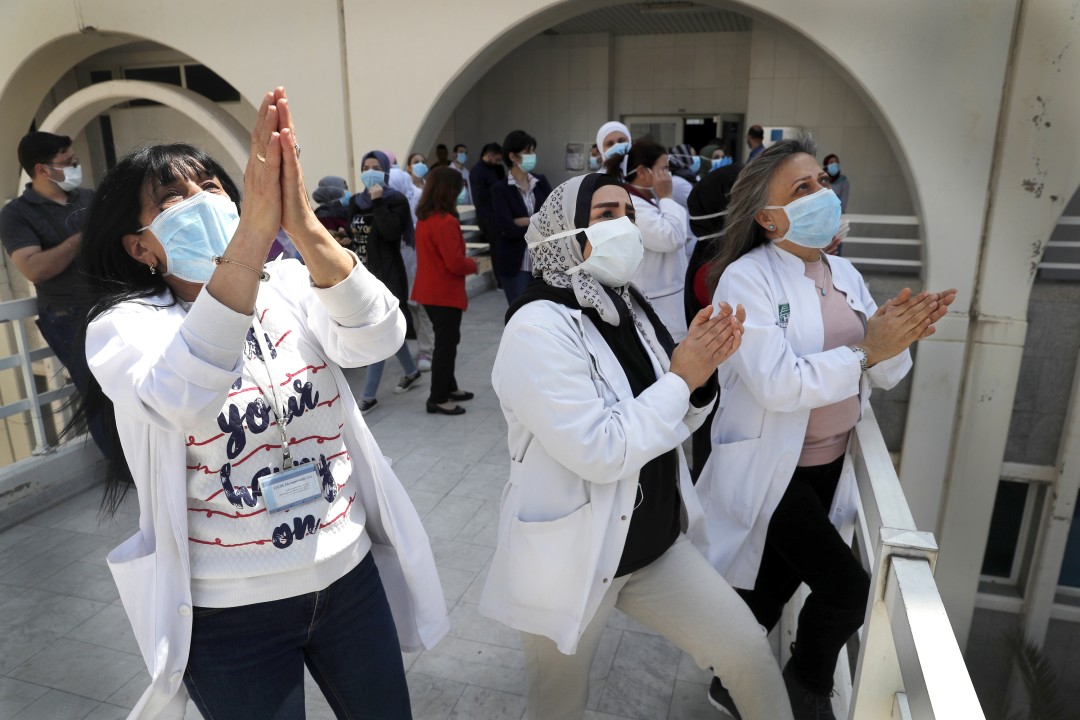 LEBANON: Nurses applaud a performance by musicians from Ahla Fawda, a nongovernmental organization, for staff and patients at Rafic Hariri University Hospital in Beirut on April 16.(Hussein Malla / Associated Press) 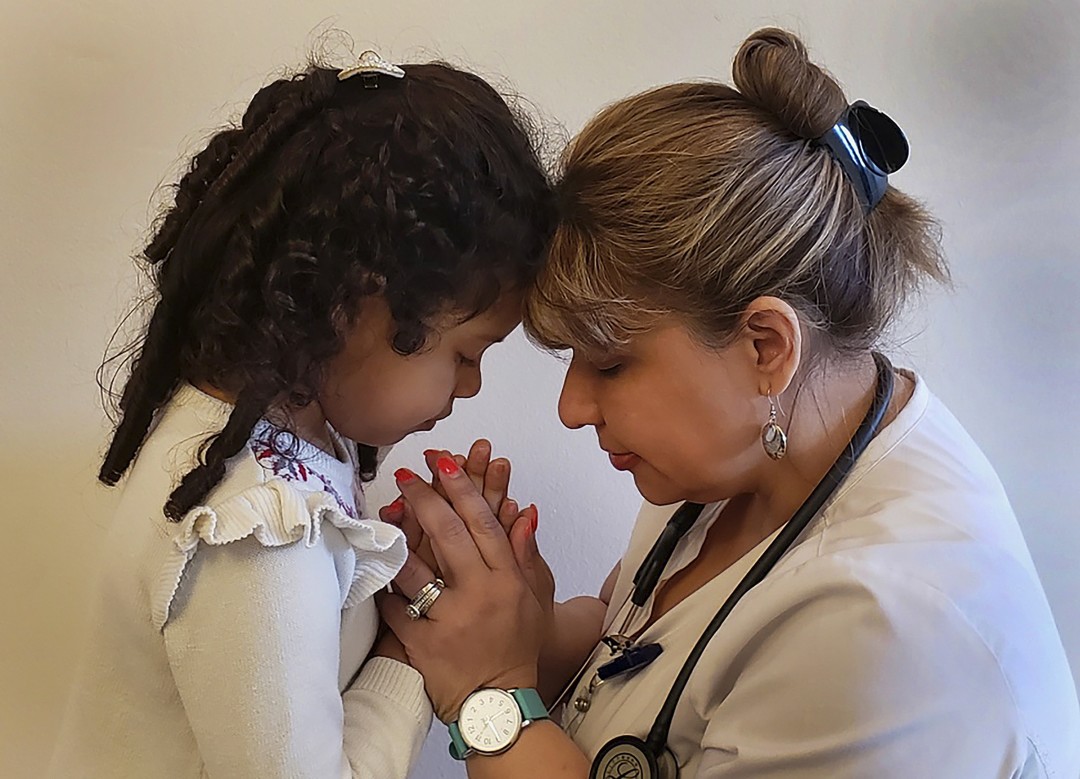 NEW YORK: Katherine Ramos, right, a nurse from Cape Coral, Fla., shares an intimate moment with her 4-year-old daughter Victoria on April 1 at a relative’s home in Patterson, N.Y., where they are staying after Ramos answered New York’s call for volunteers to reinforce staff at hospitals overwhelmed by the coronavirus pandemic.(James Ramos / Associated Press) 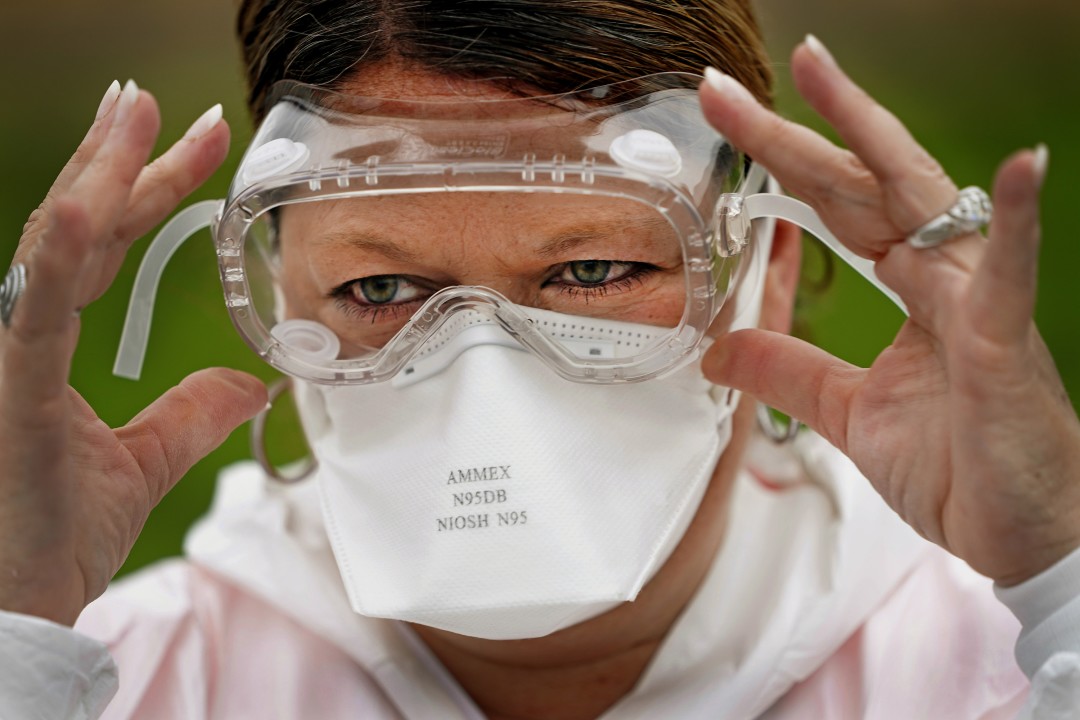 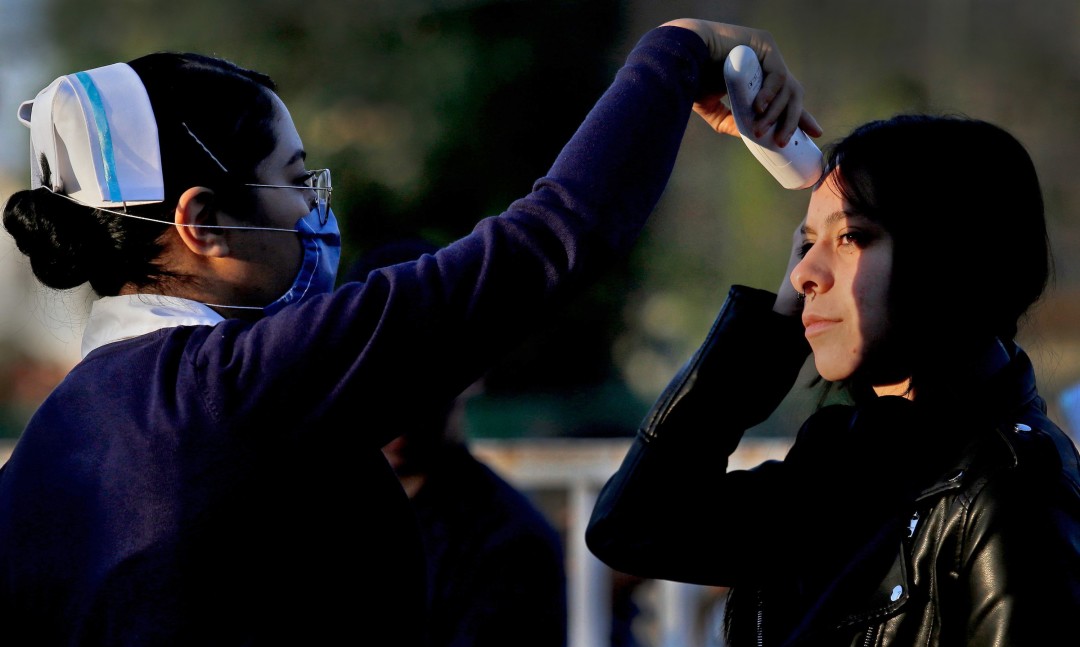 MEXICO: A nurse takes the temperature of a patient at the Jalisco Dermatological Institute in Guadalajara on March 13.(Ulises Ruiz / AFP/Getty Images) 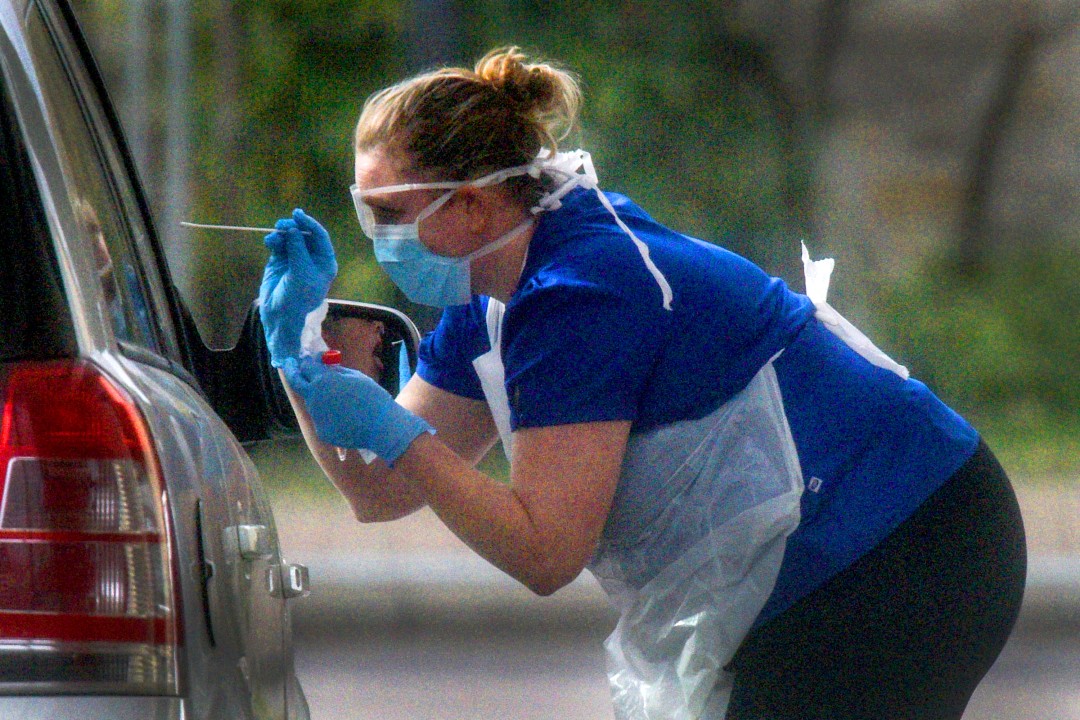 ENGLAND: A nurse prepares to swab a driver at a drive- through COVID-19 testing station in Chessington on March 28.(Peter Summers / Getty Images) 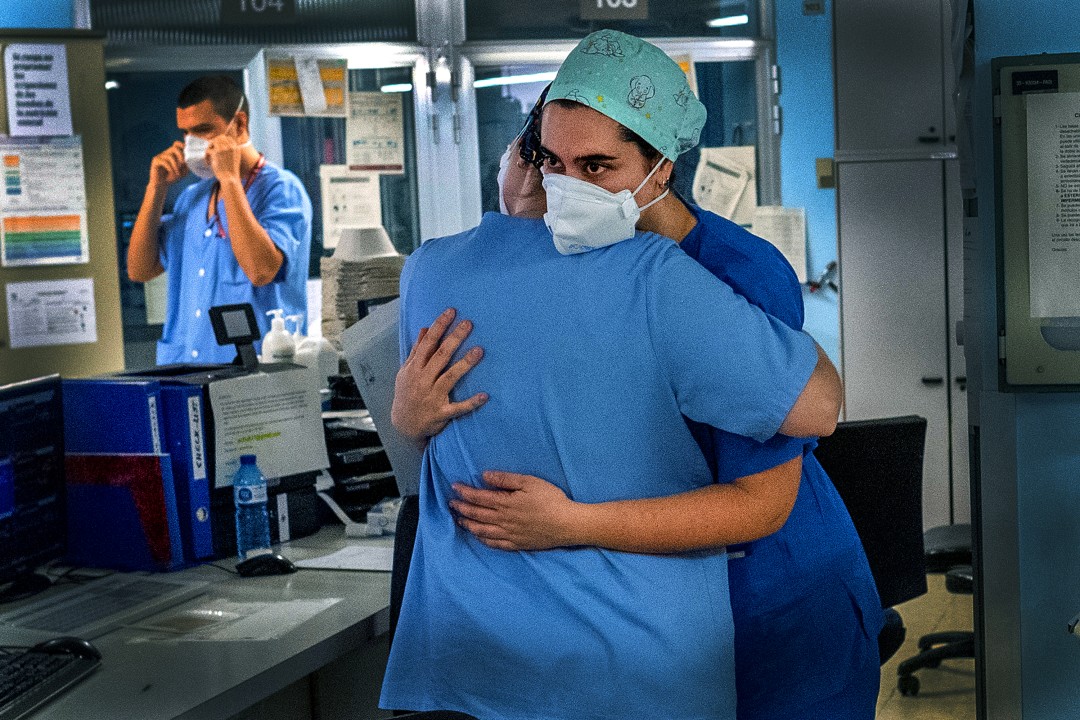 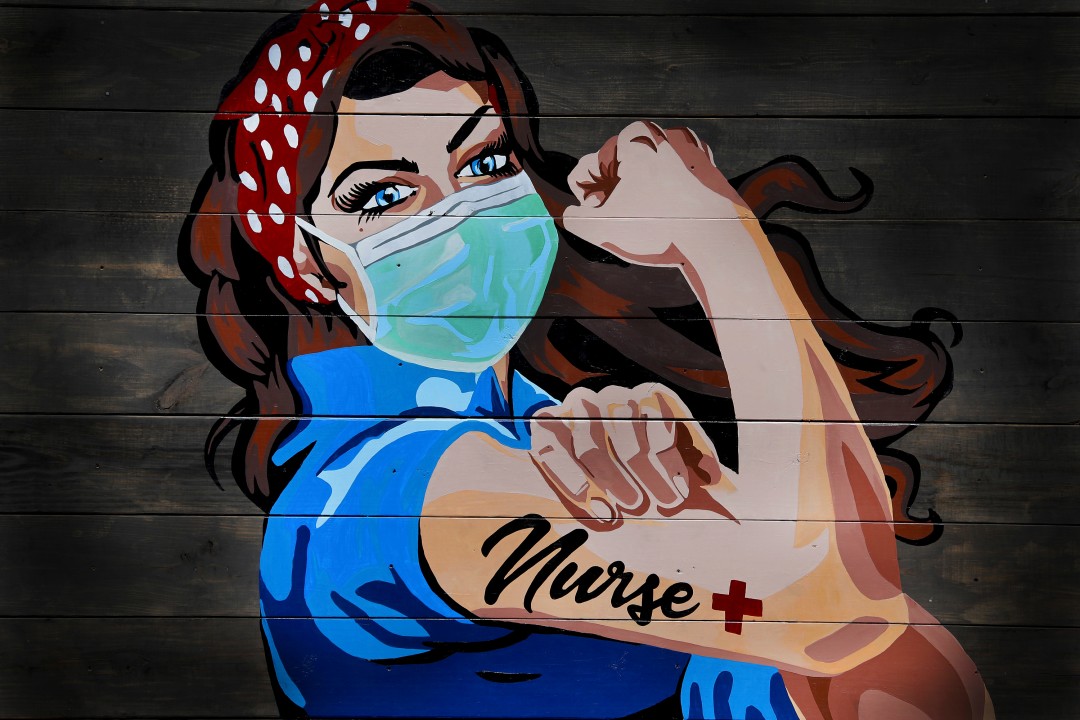 TEXAS: A Rosie the Riveter-inspired mural on a wall near a hospital in Dallas pays tribute to nurses on April 7.(LM Otero / Associated Press)