Six takeaways from Anthony Fauci's and other health officials' testimony 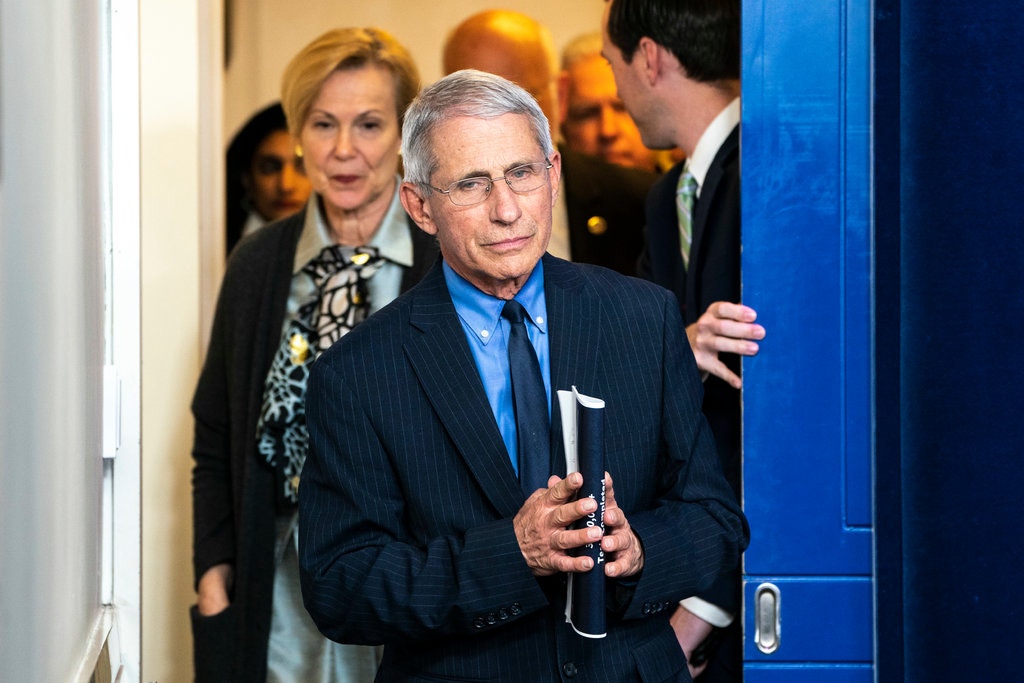 The appearance came after the White House blocked Fauci from testifying in the Democratic-controlled House but allowed him to testify in the GOP-controlled Senate. Fauci and the committee’s chairman, Sen. Lamar Alexander (R-Tenn.), appeared via video after being exposed to people who had come down with the novel virus.

Below are some takeaways from the hearing.

Fauci's relationship with Trump has been an uneasy one, with Fauci often contradicting Trump and Trump often contradicting Fauci. The medical expert has clearly desired a more aggressive approach to combating the virus and has lamented at various times that his advice hasn’t always been heeded.

Leading into Tuesday’s hearing, Fauci seemed to have a pointed message intended for the president and other advocates of a faster reopening. Fauci (tellingly) previewed his testimony late Monday night, cautioning strongly against an overly aggressive reopening plan and saying it could lead to “needless suffering and death.”

“The major message that I wish to convey to the Senate HLP committee tomorrow is the danger of trying to open the country prematurely,” he told the New York Times’s Sheryl Gay Stolberg in an email. “If we skip over the checkpoints in the guidelines to: ‘Open America Again,’ then we risk the danger of multiple outbreaks throughout the country. This will not only result in needless suffering and death, but would actually set us back on our quest to return to normal.”

The use of the White House’s slogan for reopening seemed conspicuous, and Fauci struck a very different tone than Trump has in recent days. The president said Monday that “we have met the moment, and we have prevailed,” and he said last week that we’ve entered “the next stage” in the fight: a reopening.

Fauci rebuked those decisions in his later testimony, saying, “What I’ve expressed then and again is my concern that if some areas, cities, states or what have you jump over those various checkpoints and prematurely open up without having the capability of being able to respond effectively and efficiently — my concern is that we will start to see little spikes that might turn into outbreaks.”

There has been an undercurrent of theories — occasionally stoked by Trump but more often by his allies — that the U.S. death toll of more than 80,000 is exaggerated.

But Fauci said the death toll is actually “likely higher” than that.

“I’m not sure, Senator Sanders, if it’s going to be 50 percent higher,” Fauci said to Sen. Bernie Sanders (I-Vt.), who asked about that number. “But most of us feel that the number of deaths are likely higher than that number, because given the situation, particularly in New York City, when they were really strapped with a very serious challenge to their health-care system, that there may have been people who died at home … who are not counted as it, because they never really got to the hospital.”

Fauci added: “So in direct answer to your question, I think you are correct that the number is likely higher. I don’t know exactly what percent higher, but almost certainly it’s higher.”

Certain Fox News hosts and other Trump allies have suggested that other causes of deaths could be counted as coronavirus deaths. Trump at one point retweeted a suggestion that the mortality rate was exaggerated — even as he has assured that the federal data is “accurate.”

The evidence, though — including comparing the number of total deaths now with comparable periods in the past — strongly suggests an undercount.

3. CDC head noncommittal on when delayed guidelines will be out

Sen. Chris Murphy (D-Conn.) pressed Redfield on when we might see the past-due guidelines for reopening that have been held up — noting that many states are pressing forward with reopening even without them.

“The guidances that you’ve talked about have gone through that interagency review. Their comments … have come back to CDC,” Redfield said. “And I anticipate they’ll go back up into the task force for final review.”

Pressed on a timeline, Redfield responded, “I do anticipate this broader guidance, though, to be posted on the CDC website soon.”

Sen. Rand Paul (R-Ky.) gave voice to concerns about an overly aggressive shutdown of American society. And at one point, he engaged in a particularly pointed exchange with Fauci.

Paul, who tested positive for the coronavirus early in the outbreak, argued that Fauci wasn’t the “end-all” when it came to the federal response to the coronavirus. Paul also said it made little sense to keep schools closed given the much lower fatality rate for children.

“So I think we ought to have a little bit of humility in our belief that we know what’s best for the economy,” Paul said. “And as much as I respect you, Dr. Fauci, I don’t think you’re the end-all. I don’t think you’re the one person that gets to make a decision. We can listen to your advice, but there are people on the other side saying there’s not going to be a surge and that we can safely open the economy and the facts will bear this out.”

In response, Fauci chose his words carefully, repeatedly alluding to the line about “humility” and saying he was just providing medical advice.

“I have never made myself out to be the end-all and only voice in this,” Fauci said.

Fauci added “that you use the word we should be humble about what we don’t know. And I think that falls under the fact that we don’t know everything about this virus. And we really better be very careful, particularly when it comes to children, because the more and more we learn, we’re seeing things about what this virus can do that we didn’t see from the studies in China or in Europe — for example, right now children presenting with covid-19 who actually have a very strange inflammatory syndrome, very similar to Kawasaki syndrome. I think we better be careful if we are not cavalier in thinking that children are completely immune to the deleterious effects.”

Also providing a slightly different tone than Trump’s on Tuesday was the committee’s GOP chairman, Alexander. In his opening statement, the senator played up many of the White House’s talking points about the success of the federal response.

But he also made a point of saying that testing is still far from sufficient.

“What our country has done so far on testing is impressive but not nearly enough,” Alexander said, adding that places such as the University of Tennessee need to have vastly expanded testing to be able to reopen when the school year is scheduled to begin in August.

He repeated later, “What our country has done so far in testing is impressive but not nearly enough.”

Alexander also said that while Americans can’t stay at home indefinitely, “such widespread screening of entire campuses, schools or places of work will help identify those who are sick, trace down those who are exposed. And that, in turn, should help persuade the rest of us to go back to school and back to work."

Sen. Mitt Romney (R-Utah) called the testing in the United States “nothing to celebrate whatsoever.” He also rebuked Giroir and the White House for favorably comparing U.S. testing to that of South Korea, which ramped up testing much more quickly and has dealt with a much smaller outbreak as a result.

“Yesterday, you celebrated that we had done more tests and more tests per capita even than South Korea,” Romney said to Giroir. “But you ignored the fact that they accomplished theirs at the beginning of the outbreak while we treaded water during February and March.”

A day before, Trump had offered something of a mission-accomplished message about the coronavirus response with his “met the moment” line. The president has also played up the success of the testing regime — as Alexander did Tuesday — while downplaying its importance when it comes to getting past the outbreak.

6. Fauci skeptical about treatments allowing colleges to reopen in the fall

Alexander picked up on his opening statement and asked Fauci directly whether there will be the kinds of treatments or even a vaccine available to help reopen universities in the fall term.

The senator posed the question by citing a college chancellor in his state.

Fauci responded: “Well, I would be very realistic with the chancellor and tell … her that in this case that the idea of having treatments available or a vaccine to facilitate the reentry of students into the fall term would be something that would be a bit of a bridge too far.”

He didn’t necessarily say schools couldn’t reopen — as he clarified later — but his skepticism is notable and suggests a long timetable for successful treatments.

How to Read a Book Jeremy Anderberg Open book. Read words. Close book. Move on to next book. Reading…

Nurses are the coronavirus heroes. These photos show their life now CHINA: A nurse sheds a tear while discussing…