Elephants Can "Catch" Yawns From Their Favorite Humans 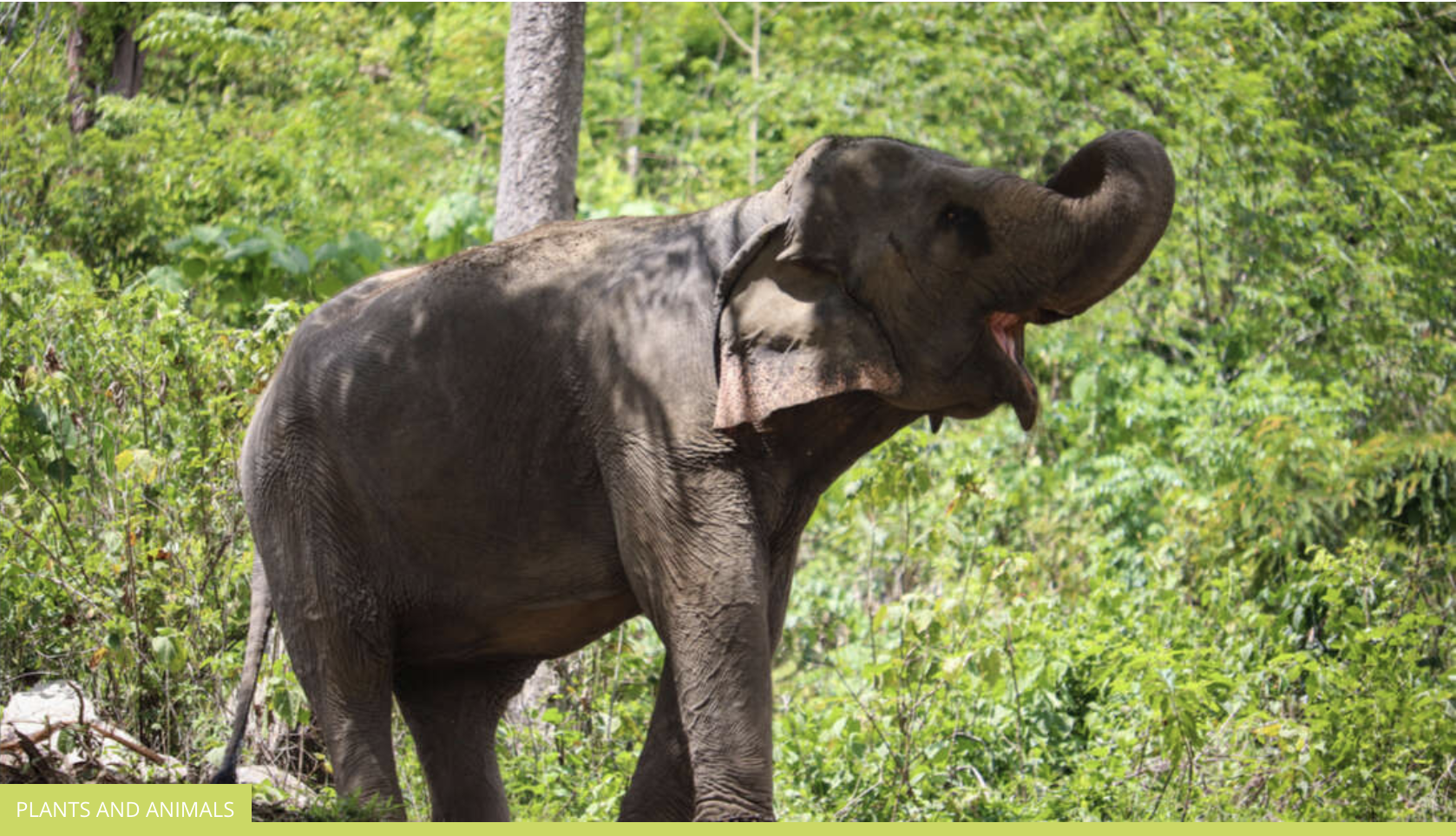 TURNS OUT, IF YOU LOOK AT A LOT OF PHOTOS OF ELEPHANTS YAWNING, IT MAKES YOU YAWN TOO.

We’ve all been there. Faced with a wall of strangers on some form of public transportation and a weary member sets off a wave of fatigue by letting out a massive yawn. Yawning is common across vertebrate classes (crucially, including sloths) but contagious yawning is a rarer phenomenon. New research published in the journal Frontiers in Veterinary Science has revealed that one of Earth’s giant geniuses is capable of catching yawns off humans, as it was observed that captive elephants will yawn if their handlers do.

Exactly why contagious yawning occurs isn’t yet clear, but some research indicates it’s a behavior linked to a sense of empathy. Until now cross-species contagious yawning had only been observed in dogs and chimps, our closest primate relative, but now it seems elephants can join in picking up our yawns, though only with humans they are familiar with.

Zoë Rossman from the University of New Mexico first saw an elephant pick up a human’s yawn when studying a herd of captive animals in 2017. Wishing to investigate the event further, she and a team from Knysna Elephant Park, a South African rescue facility for elephants, looked at whether closeness between an elephant and a human increased their likelihood to pick up a yawn.

Rossman identified a few of the elephants' favorites of the keepers at the facility and watched for two weeks as they performed staged yawns and staged gapes without the usual yawny characteristics. “The handlers at Knysna were hilariously accurate at faking yawns,” Rossman said in an interview with The Times. “They thought it sounded a bit ridiculous, until they saw the first yawn and then they went wild.” 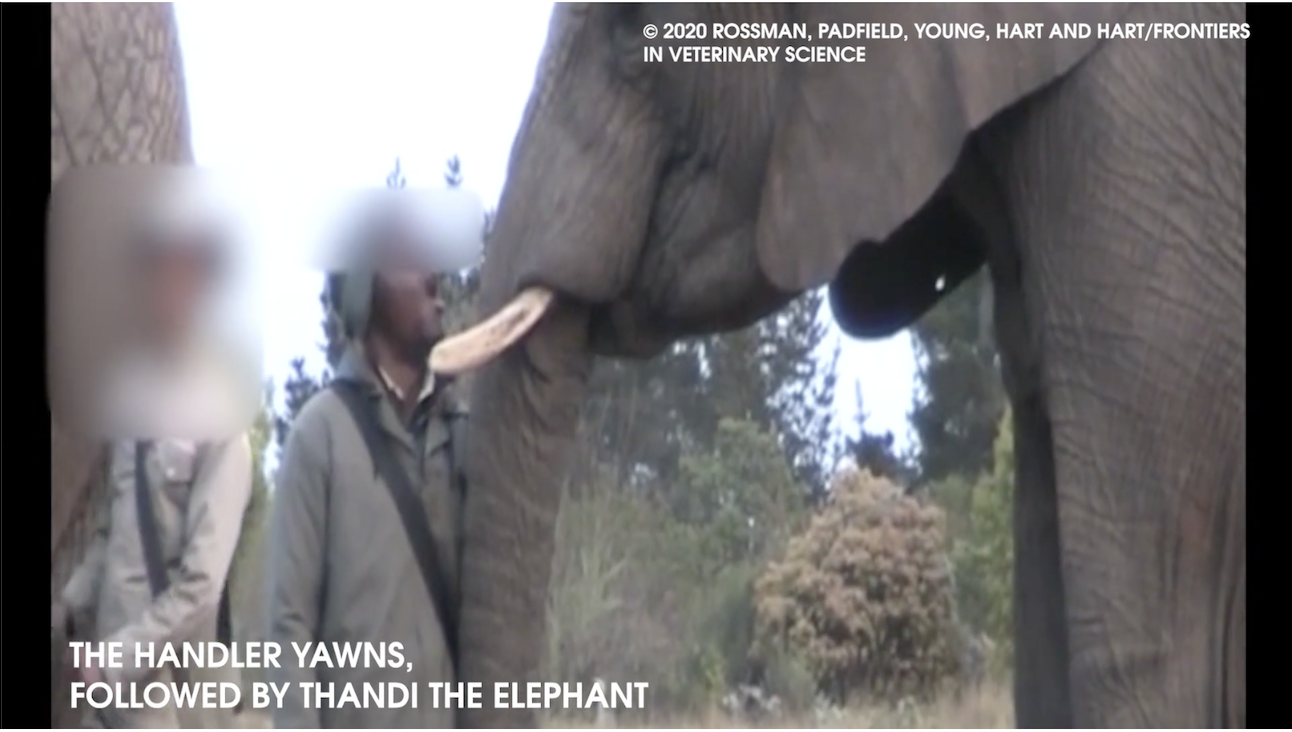 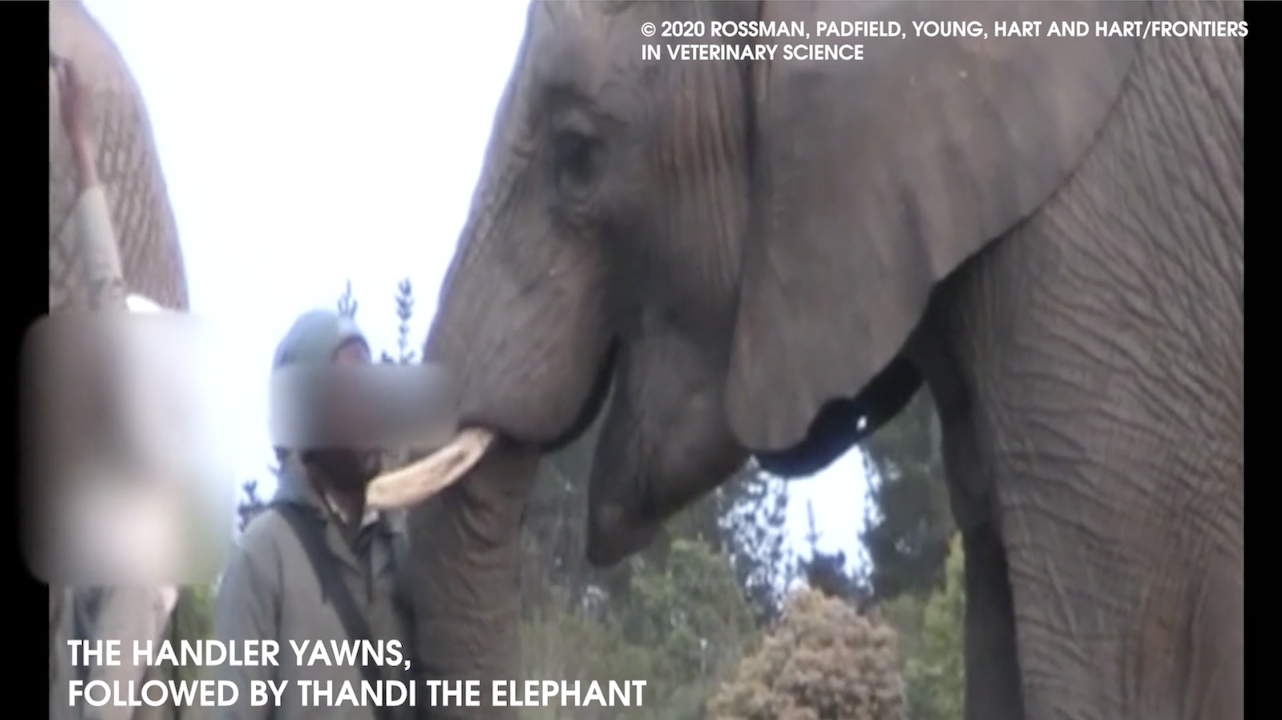 And it seems their acting skills paid off as it was reported that the elephants were more likely to “catch” a yawn after seeing a faked or real yawn compared to the less yawn-like stage gaping. They studied 10 African elephants over 13 consecutive nights and observed nine instances of intraspecific (amongst the same species) contagious yawning. Of these 10, seven elephants were also involved in the yawn trials with humans, where three were observed yawning in response to their human handlers. "This is the first report of interspecific [between different species] contagious yawning by elephants in response to yawns by familiar humans," the study authors write.

Because elephants are highly intelligent and social mammals, the team says it is reasonable to expect they would exhibit contagious yawning with other familiar elephants. Rossman believes the connectedness between elephants and their keepers in catching these yawns, however, shows that they require specialist treatment when kept in captivity or managed for conservation projects to preserve the relationships they form with their handlers.

By Christian Jarrett Address the real reasons you procrastinate and you’re more likely to start achieving your goals.…