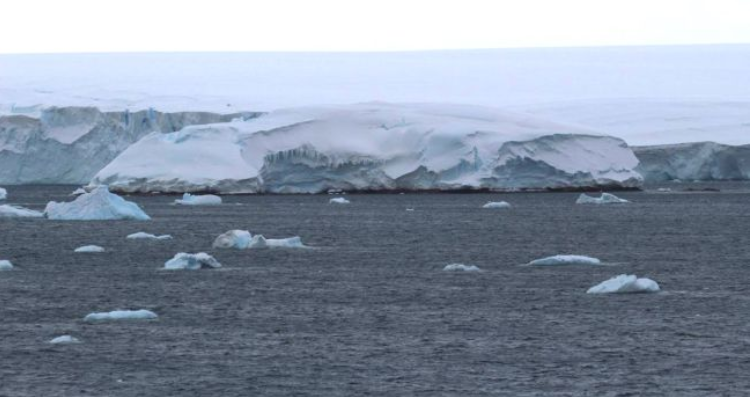 The rocky coast of Sif Island peeks out under a mound of Antarctic ice.(Image: © Gui Bortolotto)

Pointing toward South America like an icy finger, the Antarctic Peninsula is one of the fastest-warming regions on Earth. The peninsula's two major glaciers — the Thwaites Glacier and the Pine Island Glacier — are retreating toward the mainland faster than new ice can form, chipping away at the continent's coasts a little more each year.

This week, all that melting ice left behind a surprise that could change maps of the region permanently: an uncharted island, long buried in ice but finally visible above sea level for the first time.

Researchers with the international Thwaites Glacier Offshore Research project discovered the island earlier this week while sailing off the coast of the Pine Island Glacier ice shelf. The small island is only about 1,150 feet long (350 meters) and mostly covered in ice, but rises from the sea with a layer of brown rock distinct from the surrounding glaciers and icebergs.

After making a brief landfall, the researchers confirmed that the island is made of volcanic granite, and even hosts a few resident seals. According to expedition member James Marschalek, a doctoral student at Imperial College London, there is no other rocky outcropping like this visible for more than 40 miles (65 kilometers) in any direction.

The researchers tentatively named the uncharted outcropping Sif Island, after a Norse goddess associated with Earth.

Exciting as the discovery is, the island's sudden appearance is almost certainly a direct effect of the widespread glacial melt that has become typical in Antarctica in the past decade, Sarah Slack, a member of the expedition and middle school science teacher in Brooklyn, New York, wrote in a blog post.

"At first, we thought maybe an iceberg had become lodged on the outcropping years ago and then melted enough to expose the underlying rock," Slack wrote on Feb. 26. "But now we think that the ice on the island was once part of the Pine Island Glacier ice shelf, a massive field of floating ice that extends outward into the ocean from the edge of the glacier."

Using satellite images from Google Earth, expedition member Peter Neff made a time-lapse model showing how the ice shelf's steady retreat since 2011 left Sif Island detached and alone in Pine Island Bay. From above, the dollop of ice looks like just another lonely iceberg. Now that its island status has been confirmed, further study of Sif could reveal how the region's rocky underbelly will continue responding to climate change.

It's likely that the island emerged due to a process called glacial rebound, Lindsay Prothro, a glacial geologist at Texas A&M University-Corpus Christi who was not involved with the expedition, told Nature.com. When glacial ice melts, it relieves pressure on the underlying continent; in response, the continent may "rebound," or rise up higher than it previously was. It's unclear whether rebound hastens or slows the rate at which ice shelves break apart — hopefully, further study of Sif Island could provide some clues.

The team's expedition is due to end on March 25. After that, a full analysis of Sif Island rock samples can commence.