The future of groundwater in sub-Saharan Africa

An analysis of aquifer replenishment in sub-Saharan Africa shows that reduced precipitation does not always deplete groundwater reserves, challenging the idea that these reserves will decrease in response to global warming.

The population of sub-Saharan Africa is currently about 1 billion, and is predicted to double by 2050 (go.nature.com/2zj9kca), whereas the region’s climate is predicted to become drier during the same period1. Clearly, the demand for fresh water will increase. Whether groundwater can satisfy this demand is a looming question. Little is known about the rates at which water is replenished to groundwater aquifers2,3 in that region, and thus the rate of sustainable withdrawal. Writing in Nature, Cuthbert et al.4 identify the processes involved, and examine the long-term trends of aquifer replenishment in sub-Saharan Africa. The authors conclude that future drying climatic trends could affect surface-water supplies, but might not decrease groundwater supplies.

Aquifer replenishment occurs naturally in two general forms: precipitation that infiltrates at the land surface and percolates to the water table (most common in humid regions), and infiltration from streams and other surface-water bodies (most common in arid regions). Rates of aquifer replenishment are difficult to determine for various reasons, including a lack of data, high variability in the spacing and timing of replenishment, and uncertainty in estimation methods3,5.

Groundwater levels monitored over time provide one measure of the volume of aquifer storage and rate of replenishment — rising groundwater levels generally imply that aquifers are being replenished. Unfortunately, there is a dearth of long-term groundwater-level data in sub-Saharan Africa2. Cuthbert and colleagues’ study was made possible by the compilation of a rigorously reviewed, multi-decadal data set of water levels from 14 wells in areas across the region that are relatively unaffected by human activity. This unique data set allowed the authors to reach conclusions that have not been possible previously. 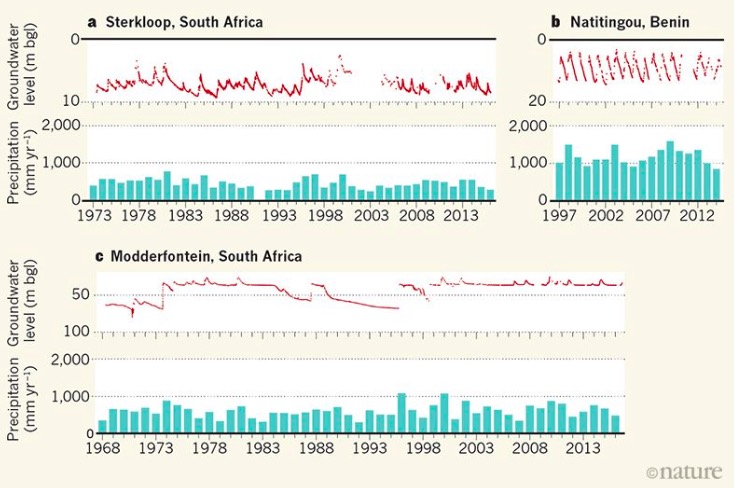 For the second type of aquifer response (Fig. 1b), annual replenishment was fairly constant from year to year, regardless of the amount of precipitation. This type of response is known as self-regulating behaviour7, and Cuthbert et al. observed it in two wells in humid settings. Drying climatic trends at these sites will probably not alter replenishment rates.

These results demonstrate a limitation of regional-scale assessments of the effects of climate change on groundwater resources, such as those published by the Intergovernmental Panel on Climate Change1. The large spatial scale of the climate-model predictions used in such assessments precludes a consideration of the variability and intensity of precipitation at the smaller scales that control aquifer replenishment in some environments. Cuthbert and colleagues’ findings thus call into question previous conclusions, such as that “climate change is projected to reduce renewable surface water and groundwater resources significantly in most dry subtropical regions”1.

The new findings also highlight the need for improvements in models of climate and hydrology. Climate models that can better predict the variability and intensity of precipitation events at the local scale, as well as the large scale, would allow hydrological models to better represent replenishment processes. Moreover, hydrology models that can account for local variability in geology, soils, land use and other features are also needed to enhance our understanding of where, when and how aquifer replenishment occurs.

Although climate models and hydrological models will continue to be key tools for evaluating water resources in sub-Saharan Africa, the importance of actual measurements of groundwater levels cannot be overstated. In this respect, Cuthbert and colleagues’ compilation of long-term data from 14 wells is a valuable contribution, but the sparseness of this data set becomes clear when one considers the size of the region (approximately 23 million square kilometres). Measured groundwater levels are essential for estimating the amounts of water stored in aquifers and rates of aquifer replenishment; for identifying trends associated with climate, water- or land-use change; and for verifying the results of computational simulations of hydrologic models8. The monitoring of groundwater levels in sub-Saharan Africa must therefore be expanded to improve the understanding and management of groundwater resources at community, regional and country scales.

Better models and an expanded groundwater-level monitoring network should improve assessments of water resources in sub-Saharan Africa, but climate change is only one of several factors that must be considered. Human activities can have profound effects on groundwater quantity and quality, and how these activities will play out in the future is difficult to predict. For example, groundwater storage might increase as a consequence of land-use change, such as the replacement of native vegetation with pasture or row crops. But agricultural, industrial and mining activities, for example, might adversely affect groundwater quality, and thus limit the use of groundwater resources. Assessing the future availability of such resources in sub-Saharan Africa remains a difficult task, but Cuthbert and co-workers’ study is a crucial step in the right direction.