The Dutch artist died 130 years ago 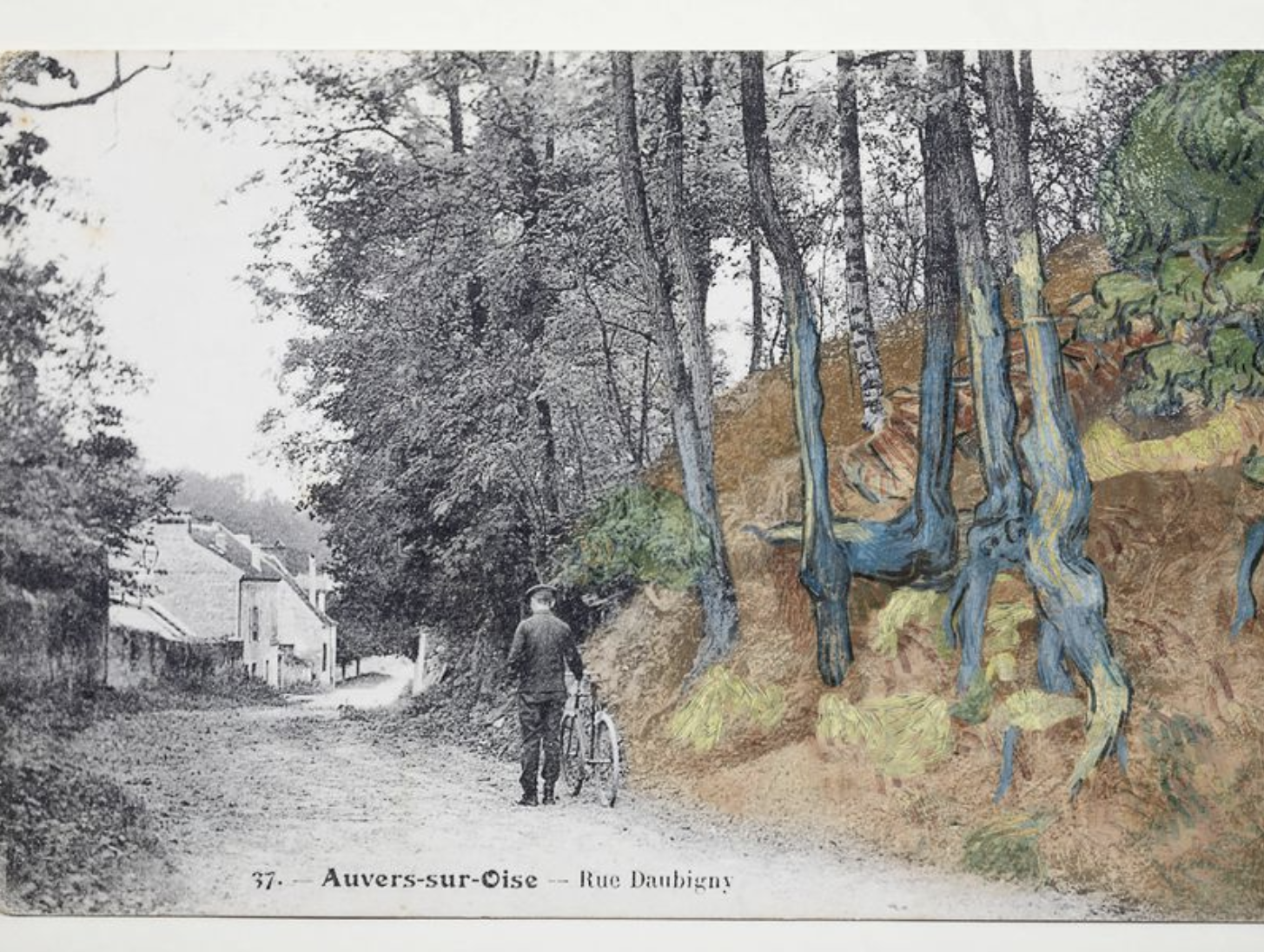 Vincent van Gogh’s final painting, Tree Roots, is a jumble of color and shapes: Knotted blue roots protrude from an abstract, sloping hillside, and bright green leaves seem to wave in the breeze.

As Andries Bonger, brother-in-law of Vincent’s brother Theo, later wrote, “The morning before Van Gogh’s death, he had painted a sous-bois (forest scene) full of sun and life.”

Historians know that the troubled Dutch artist worked on the canvas on July 27, 1890—the same day he returned to his hotel in Auvers-sur-Oise, France, with a gunshot wound to the stomach. Two days later, van Gogh died, leaving Tree Roots unfinished.

Now, thanks to a chance encounter with a vintage French postcard, researcher Wouter van der Veen has discovered the exact patch of road where van Gogh produced his last work. Experts from the Van Gogh Museum in Amsterdam have corroborated the findings as “highly plausible,” according to a statement.

Van der Veen, scientific director of the Van Gogh Institute in France, made the discovery while studying a trove of early 20th-century postcards of Auvers that he’d borrowed from a prolific collector, reports Nina Siegal for the New York Times. One day, he looked at a card from 1905 and did a double take, sure that he’d seen the roots pictured before.

“The similarities were very clear to me,” van der Veen tells BBC News. 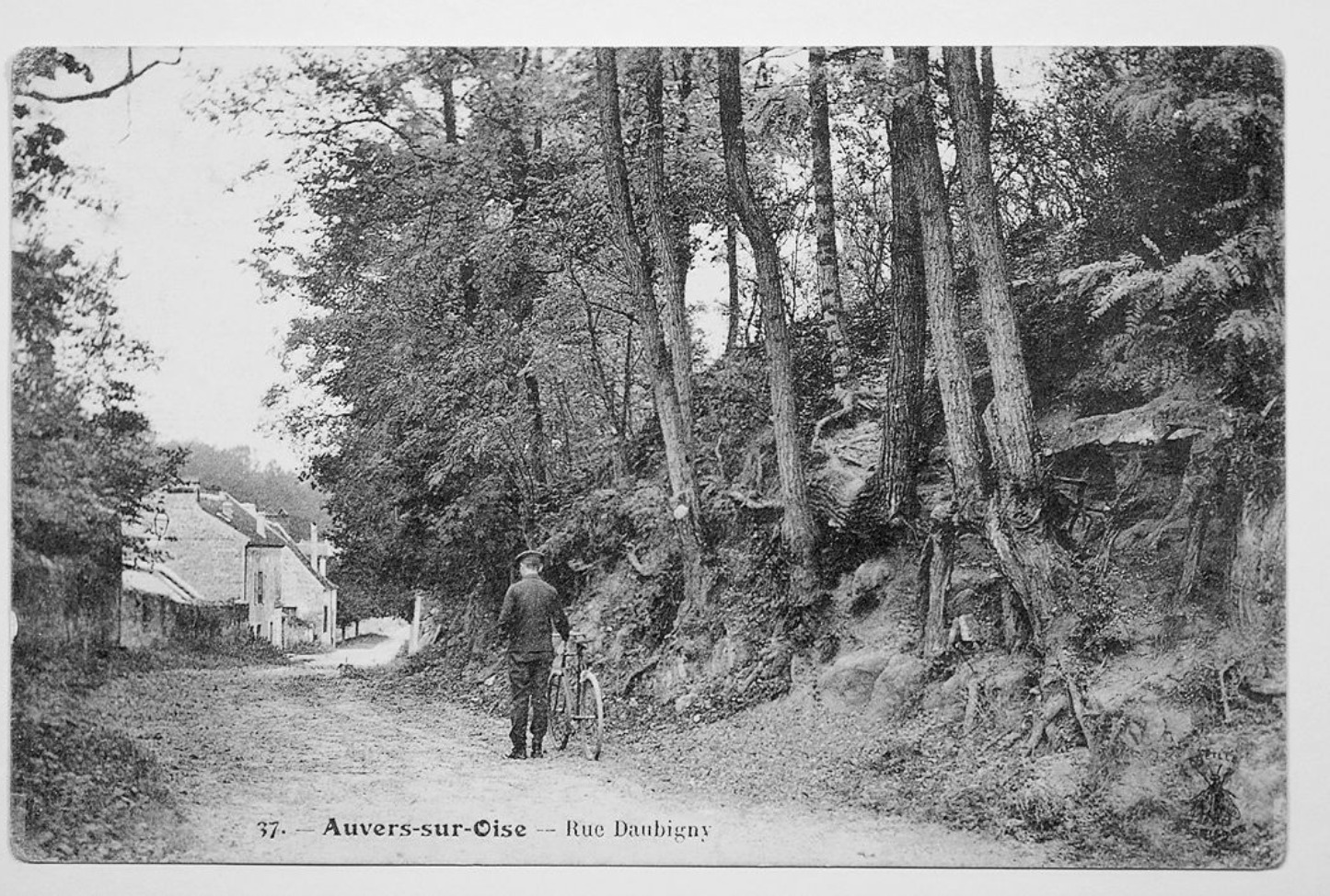 The black-and-white postcard, circa 1905, that led to Wouter van der Veen's lockdown discovery (Courtesy of the Van Gogh Museum / © arthénon) 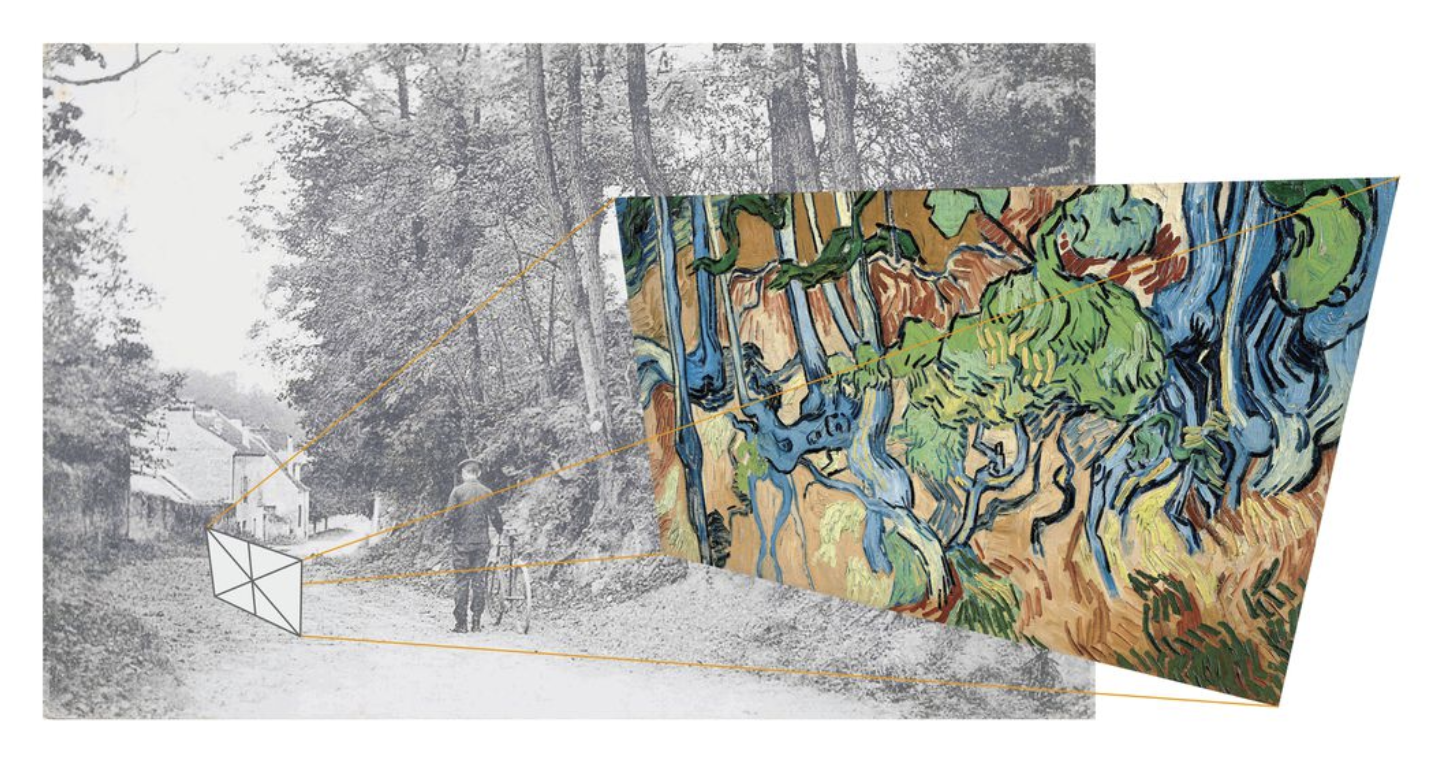 In the postcard, a cyclist stands next to a steep hill covered in thick, tangled roots. The spot is approximately 500 feet from the inn where van Gogh spent the last 70 days of his life.

“Every element of this mysterious painting can be explained by observation of the post card and the location: the shape of the hillside, the roots, their relation to each other, the composition of the earth and the presence of a steep limestone face,” says van der Veen in the statement. “The site is also consistent with van Gogh’s habit of painting motifs from his immediate surroundings.”

Unable to travel to the site personally due to France’s COVID-19 lockdown, van der Veen recruited Bert Maes, a dendrologist specializing in historical vegetation, and experts at the Van Gogh Museum, reports Daniel Boffey for the Guardian. He also contacted the Van Gogh Institute’s owner, Dominique-Charles Janssens, who was in Auvers at the time, and asked him to visit the hillside. Per the Times, Janssens quickly confirmed van der Veen’s hunch.

Teio Meedendorp, a senior researcher at the Van Gogh Museum, says in the statement that van der Veen’s “remarkable discovery” is “highly likely to be the correct” location.

Meedendorp adds, “That this is his last artwork renders it all the more exceptional, and even dramatic. … He must often have passed by the location when going to the fields stretching out behind the castle of Auvers, where he painted several times during the last week of his life and where he would take his own life.”

Yesterday, ahead of the 130th anniversary of the artist’s July 29 death, Emilie Gordenker, director of the Van Gogh Museum, and Willem van Gogh, great-grandson of Vincent’s brother Theo, unveiled a commemorative plaque at the newly identified site, reports Martin Bailey for the Art Newspaper.

Van der Veen has published his findings in a new book titled Attacked at the Very Root: An Investigation Into Van Gogh’s Last Days. The text is free to download via the historian’s website. 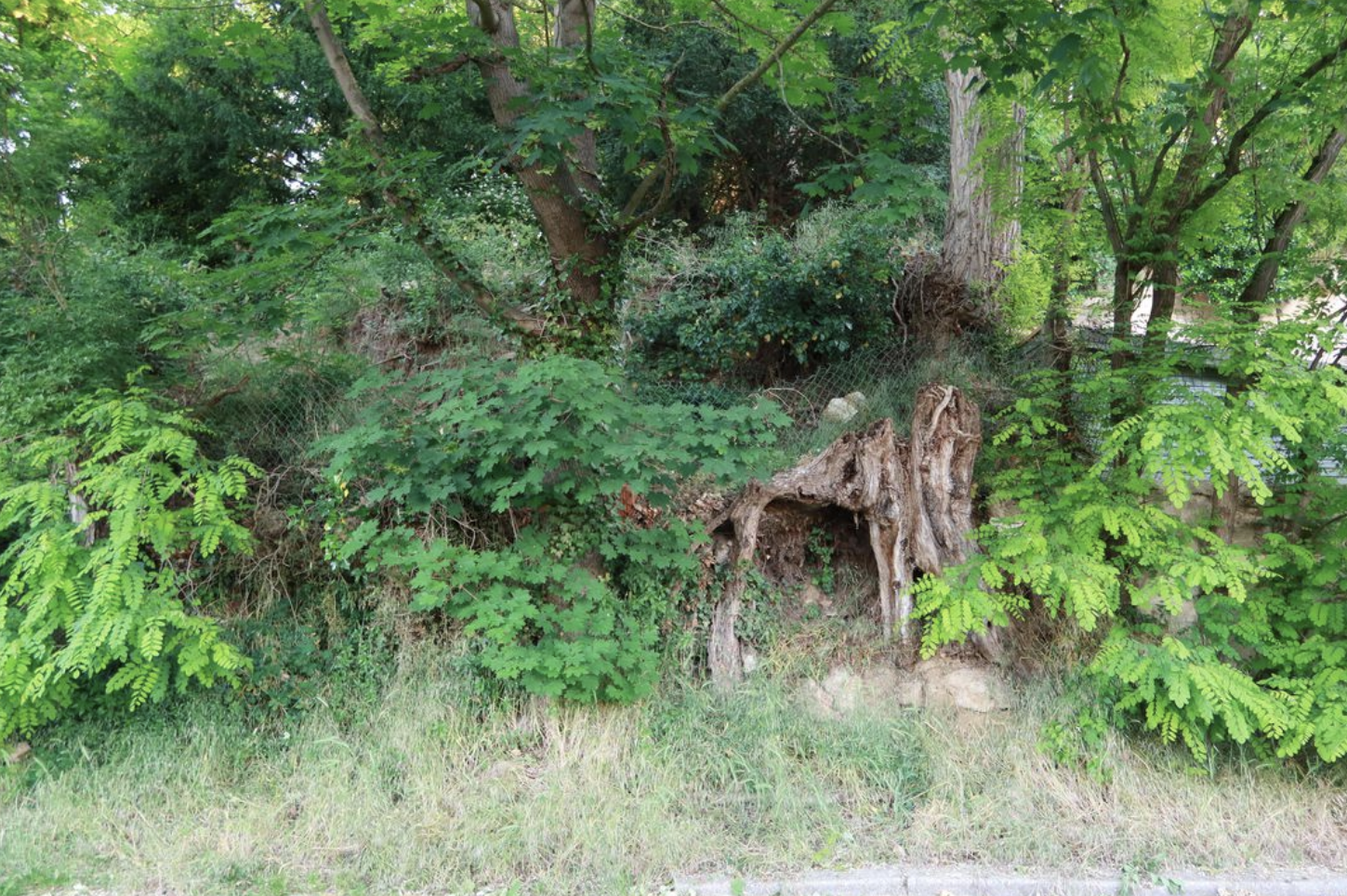 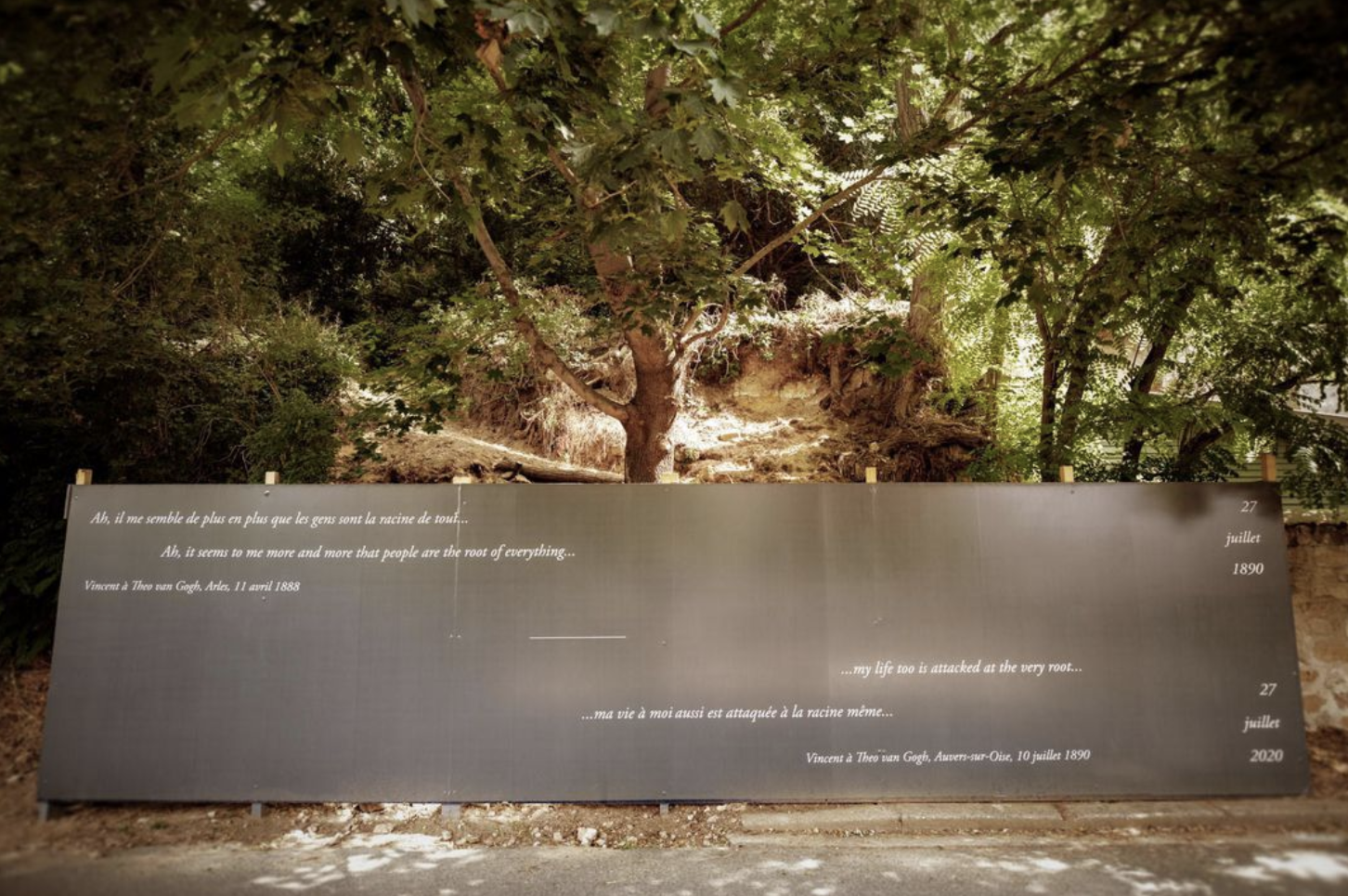 Though van Gogh’s death has long been retold in popular culture and analyzed by scholars, much about his final days remains unclear. Historians know that the artist suffered from acute mental illness for many years—a particularly bad bout may have led him to cut off part of his left ear in 1888—but descriptions of his symptoms are often vague, and contemporary diagnoses vary, according to the Van Gogh Museum.

In 2011, art historians Steven Naifeh and Gregory White Smith made headlines by controversially theorizing that van Gogh’s death was an accident. But the Van Gogh Museum, van der Veen and most historians maintain that the artist shot himself in the stomach.

“Ending his life with this painting makes so much sense,” van der Veen tells the Times. “The painting illustrates the struggle of life, and a struggle with death. That’s what he leaves behind. It is a farewell note in colors.”

Researchers hope that this new discovery will help tourists and art lovers gain a deeper understanding of the artist’s final days. As the Van Gogh Museum says in the statement, “From today, those who visit Auvers to follow in the footsteps of Van Gogh will add another moving experience to their journey: They can stand at the exact place where Van Gogh’s paint brush last touched the canvas.”

Kodak surges 1,900% in 2 days after securing a $765 million government loan to make drug ingredients By…